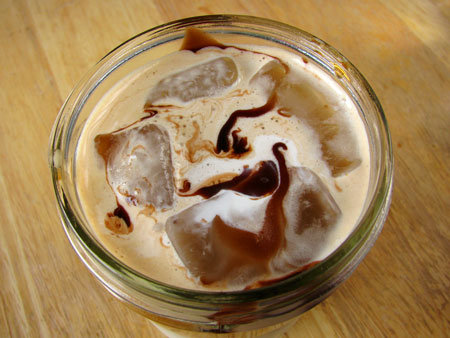 I used to work at Starbucks, and the funny thing was that I didn’t even really like coffee that much when I got the job there.  But I needed a job and it was only a 5 minute drive from my house.  Everyone seemed friendly there so I thought it would be a great place to work.  My introduction to the world of coffee started like a child entering a frigid wading pool one inch at a time.

I started with the caramel macchiato, a sickening sweet combination of vanilla syrup, extra thick caramel sauce and espresso in milk.  I got extra caramel.

Eventually I moved on to trying other drinks; white mochas, mochas, thais (in Hawaii this is a latte with sweetened condensed milk), vanilla lattes and so on.  These were less sweet but still masked the strength of the espresso shots.  After a year at my store I was promoted to shift manager and felt it was time to move away from the wimpy drinks.

I was a top barista with incredible milk foaming skills that had the pickiest of customers asking for me by name!  So I decided on a short cappuccino, no sweetener.  I made my own most of the time, except when someone else I knew made great foam was on shift.  I became a bit of a foam snob, especially when it came to soy milk.  In fact even now I rarely order cappuccinos because bubbly foam is so depressing. 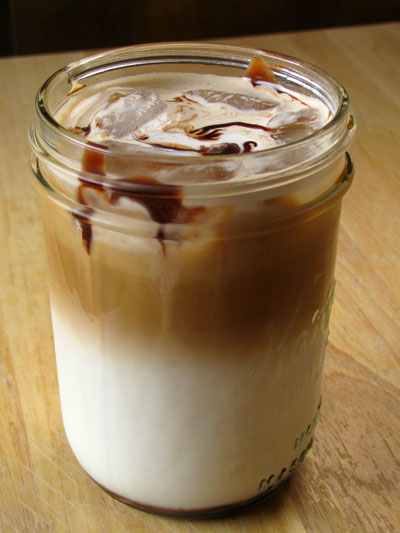 I spent four years at Starbucks, and I think I may have overindulged on coffee the mornings that I opened.  I’d wander in bleary eyed and start the espresso machine up first to get it warmed up.  As soon as it was I’d “test it” by pulling myself a couple shots.  By the time I had a break two hours later the morning rush was well under way, so I’d get four shots in my cappuccino to help me stay energetic.  On one shift I got up to 12 shots before I realized I was shaking and not at all feeling like myself.

I tried to pay better attention after that, but I suspect that 4 years of unlimited coffee has affected me permanently.  Now I need quite a bit of milk to keep coffee from upsetting my stomach.  So I usually stick with lattes (my go to drink is a vanilla soy latte) or once in a while indulge my occasional sweet tooth with my own special concoctions. 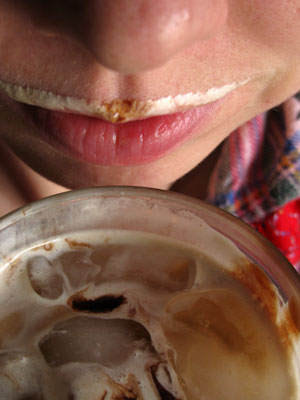 April and May have been the most stressful months I’ve had in a long time.  Trying to create a non profit cooking program, flipping a house (so we can live in it), mentoring at risk youth, planning a bachelorette party and prepping for a wedding (Eric’s sister gets married on the 23rd of May) is a lot to do at once and that’s not even all of it!

When you have that many deadlines and people depending on you, you need to take a time out every once in a while to enjoy the finer things in life like espresso, chocolate, and heavy cream!

Don’t worry, it’s not a ton of heavy cream, mostly 2% milk but I drizzle a little cream over the top to add some richness that makes me feel like I’m spoiling myself.  You can mix everything together, but I like to layer it so that each sip lets me distinctly taste different flavors.  You can make this in a glass, I like drinking it out of canning jars because it feels old fashioned and I can put a lid on it to take on the go. 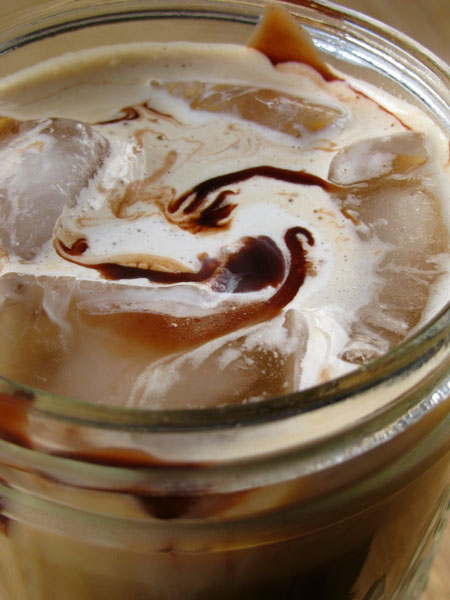 Squirt or pour vanilla syrup into your glass or jar then place ice in the jar.  Slowly pour milk over the ice.

Pull your shots of espresso and pour them over the milk.  Drizzle cream and then chocolate over the top.

Approximate cost/serving: About $1 which is way cheaper than Starbucks!

5 thoughts on “Iced Mocha Recipe and My Introduction to Coffee”