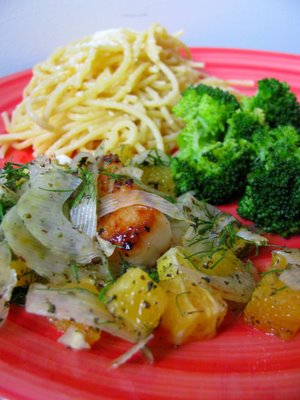 As I mentioned before, Eric and I watched quite a bit of Top Chef while house sitting for his parents. One of the contestants, Jamie, cooked a scallop poorly in a challenge. So in the next challenge she decided to go with scallops again to prove she could cook them well. Many people criticized this decision, both on and off the show. In fact Eric decided Fabio was hilarious as he spouted “The show’s called Top Chef! Not Top Scallop!” But the judges loved her dish and seemed to appreciate her decision. I’d been wanting to try fennel and decided this would be a great dish to test. 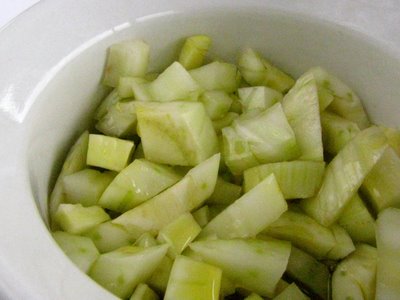 I had to change a few things about her recipe (if it’s in fact her recipe, I don’t know who compiles the recipes from the show, which are filled with typos and misinformation!). For instance it says to cool the chopped fennel in the oven rather than cook it. Hmmm. I had to scale it down to serve 2 instead of 7, I also didn’t include the olives because Eric calls olives poison and hates them. Because I made a smaller amount of the fennel puree, I didn’t strain it to make it smooth, but I like chunky textures better anyway.

Eric really liked the dish and was pretty impressed with it. I liked it too although it was like nothing I’ve ever tasted. The flavor combination was so new I had to have several bites to decide if I liked it. The licorice flavor of the salad was a little strong for me, I think I’d like a little more fronds and orange and a little less shaved fennel bulb. It was fun making a recipe from the show and I may experiment with some more. I kept the rest of the meal very simple with a parmesan pasta and steamed broccoli with cabernet vinegar. 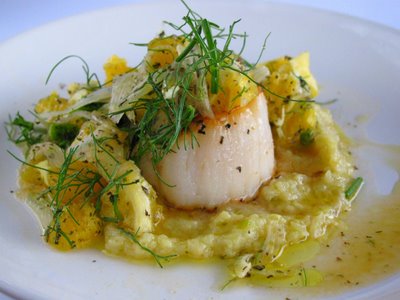 Seared Sea Scallops with a Roasted Fennel and Garlic Cream, and Salad of Shaved Fennel, Mint, Oranges, and Fennel Fronds.

TO SERVE
Season scallops with sea salt and pepper then sear on each side. Place the warm fennel puree in the center of the plate. Top with scallop. Top scallop with fennel salad. Drizzle with a little lemon oil and serve.