Vote for my dish in the recipe contest! 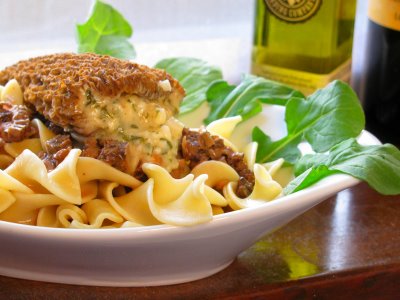 First of all, I owe a gigantic thank you to Justin Marx and MarxFoods.com. They posted a recipe challenge for morels; basically you give your idea for a recipe using morels, and if they like it, you get some dried morels to try and create it. I was so excited when Justin emailed me to say that I would be getting some morels to play with, I’ve never had them before so it was fun to test the taste and texture to try to figure out what ingredients would go well with them. 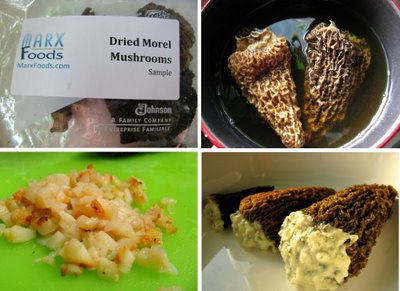 Here’s the idea I told them I’d like to try: “Oooh, I’ve never tried morels so I’d want them pretty much intact to be able to really taste them. I’d probably stuff them with something, maybe goat cheese and some fresh herbs and shrimp or lobster. Yum!” I was one of the lucky ones selected, so now you can go vote for my dish so I can win some fresh morels to experiment with! I wanted to bribe you with some morels of your own, but my husband said that’s unethical and I guess I actually kind of agree with him. There’s a reason we’re married 🙂 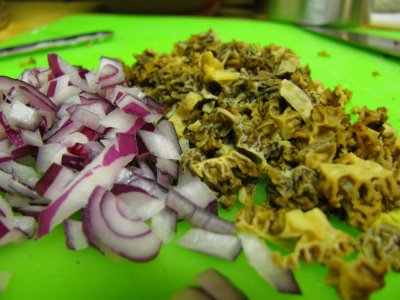 Morels are funny looking things, in fact the first thought I had when I got them was “They’re gnome hats!” I knew I needed to rehydrate them before I did anything, so I soaked some in white wine, chicken stock and water for about 8 hours. It ended up making an amazing broth that I really wanted to make into soup, but used for my recipe instead. I decided to do the stuffing with scallops, bacon and goat cheese. So good! I even went the extra mile and made a pasta sauce out of the morels. I couldn’t decide if I liked them better stuffed or in pasta so I combined the two dishes and it was quite a symphony of flavor, really like nothing I’ve ever had before. 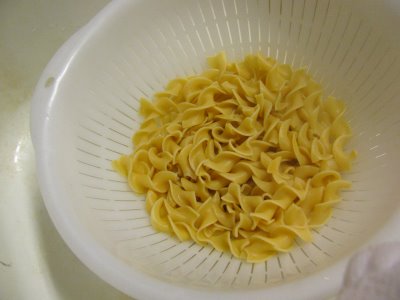 I’m so thanful I got to try cooking with morels, and hope that I’ll get to play with them some more. I think they’d be delicioud in stir fry, curry, or battered and fried. I love playing with food! If you’d like your own dried morels to play with, head on over! It’d be a great deal to split with some fellow foodies. 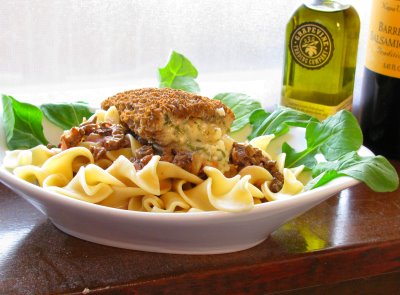 Combine white wine, chicken stock and water and soak morels in it for at least 8 hours. I like to nest another bowl on top to hold the morels down. Once they’re hydrated, remove the morels but save the rehydrating juice.

Preheat oven to 400 degrees. Mix goat cheese with parsley, chives and pepper (make sure to crush the herbs between your fingers first). Stir in 2 TBS of the rehydrating juice until a nice paste is formed. Crumble the bacon finely and mix into the cheese paste. Pan sear the scallop about 3 minutes on each side. Chop it finely and stir into cheese paste. Stuff four of the morels with the cheese and scallop mixture and place in a baking dish. Bake for 15 minutes.

Boil Pasta according to package instructions. Chop the fifth morel. In a saucepan, melt butter and then saute chopped morel and onion. Add the rest of the rehydrating juice and boil until reduced by half. In a blender, puree the morel and onion mixture. Return it to the saucepan and add red wine vinegar and cream. Simmer another 5 minutes, remove from heat and add balsamic vinegar and truffle oil.

Place the pasta on plates (I like to put mine on a bed of arugala). Pour sauce over the top. Remove stuffed morels from pan and spoon into cheese mixture that’s leaked out back into them. Place stuffed morel on top of pasta.

If you like this recipe, please VOTE FOR ME in the recipe contest. Thanks!

0 thoughts on “Stuffed Morels on Morel and Truffle Oil Pasta”