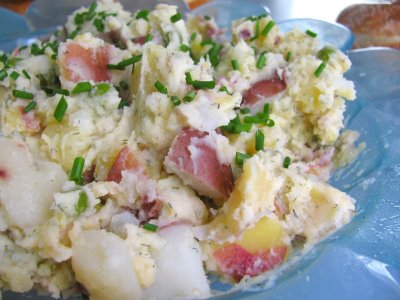 With the beautiful weather we’ve been having, it’s time for potlucks, barbecues and picnics. This potato salad is my favorite thing to make for a potluck or BBQ, so when Eric’s mom invited us to one for his grandpa’s birthday, I immediately offered to provide the potato salad. I’m not usually able to eat very much mayo, and that’s typically what potato salad is full of. But this is a light, creamy version, that uses only a little mayo for the whole salad, the rest of the zing comes from lemon juice. Another option, if you want to completely cut out mayo is to use buttermilk instead. Every time I bring this potato salad people love it and get so excited to hear that it’s actually a healthy potato salad. 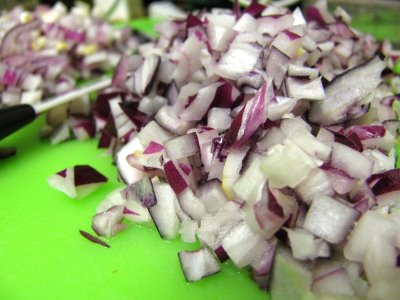 The kind of potatoes you can use for this salad are really flexible. This time around I bought a big bag of golden red potatoes because I have a barbecue one or more times a week for the next month, so I figured I need a lot of potatoes. When I make it at home I use the small red potatoes. The nice thing about red potatoes is that by leaving the skin on, you get some added color to the potato salad, as well as a good dose of Vitamin C, fiber and Potassium. I prefer the skin left on because I have a weird thing about textures in my food and if it’s too mushy, I can’t eat it. I leave the skins on in my mashed potatoes too. I’m weird that way! 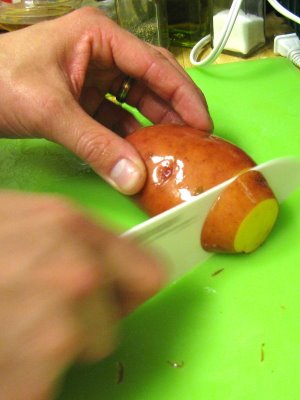 This recipe is also incredibly affordable, I always have to factor in cost when bringing a dish somewhere. When it comes to potato salad, it’s cheaper and healthier to make your own. My husband used to work in the deli at a grocery store, and knowing what was put into the different food items they serve, he doesn’t eat them. The other nice thing about this is that it’s really flexible. I throw some peas in for added nutrition and color. I usually use dried herbs in it, but my mother in law has fresh ones at her place so I grabbed some when I got there. If I’m just making a small amount for the two of us, I use 4 small potatoes, only a TBS of mayo and a couple of lemon juice. Play around with it, it’s really hard to mess it up. 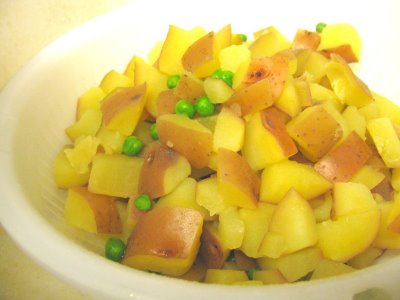 By the way, anyone have any secrets for keeping potatoes from going bad? We’re more of a rice household, so it seems like whenever I buy more than four potatoes at a time, I end up having to throw some away. Potatoes get NASTY when they go bad. Oh man, the first time I experienced it I was pet sitting and I thought the dog had peed on the bag of potatoes. But then it happened to me and I don’t have a dog! Try not to think about that as you make yourself potato salad 🙂 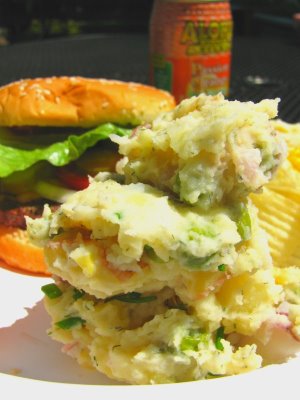 Cut potatoes into 1 inch chunks. Fill a large pot with water and add 1 tsp kosher salt. Put the potatoes in and put on high heat. Allow to come to a boil and cook for about 25 minutes total or until potatoes are tender. During the last five minutes of cooking, add frozen peas to the boiling water.

Drain potatoes and peas in a colander. Dump into a large bowl and add remaining ingredients. Mix well with a wooden spoon, leaving chunky. Taste to see if you’d like additional lemon juice or herbs. Refrigerate for at least an hour.

Approximate cost per serving: $3.18!!!! I know, cheap! Getting such a big bag of potatoes helped with the cost.
Gluten Free/Vegetarian: Some mayonnaise is gluten free, and I also know there are vegan mayos out there. Read your labels!

0 thoughts on “What to Bring to a Potluck: Lemony Potato Salad”