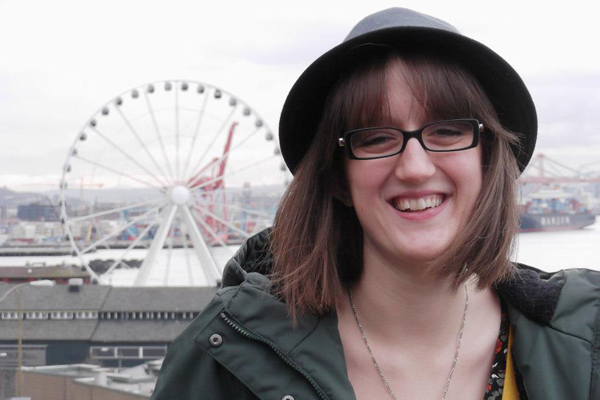 Kelsey has a life threatening peanut allergy. While there is debate on whether or not anaphylaxis is possible through airborne transmission of peanuts, we have known people who have had severe reactions to airborne particles of peanuts and ended up in the ER. Kelsey is one of those people and has, in my opinion, taken a positive approach to dealing with this allergy.

She takes responsibility for her safety. When I am holding a cooking class, she asks in advance what ingredients will be used to determine if it would be safe for her to attend. She goes out into the world, armed with her epipen, knowing that at any moment, someone around her might be eating a snack containing peanuts.

So when Kelsey enrolled at UW Tacoma, she met with the school’s Disability Support Services to talk with them about her options. You can read her blog post for the complete details, but basically she and DSS worked out a system of alerting her classmates and making her classes (just her classes, not the campus) peanut free zones. It seemed to be working well and though she knew she wasn’t really “safe” (because anyone could still ignore the signs and eat peanuts), she felt supported by her school.

Then the library did a pilot policy change to allow food. Now Kelsey could no longer use the school library for studying or access to books. After talking with the library’s director, who talked with DSS, the director decided that the pilot period had shown that food in the library wasn’t a good idea, and to return to a no food policy.

But the school Chancellor stepped in and said that the new policy would be to allow food, and then began to strip away the safeguards Kelsey and DSS had put into place. They removed the signs from her classrooms and told the DSS office that the signage was actually a facility issue, not an access issue. Kelsey was told she could no longer have access to the DSS office, and that all accommodation requests had to go through the Chancellor. HER RIGHTS WERE STRIPPED AWAY.

Now I’m not a reporter, I haven’t contacted the school to hear their side of the story or verify facts. But I have liked and respected Kelsey since the first day I met her, and I think her story is one worth sharing. I’ve been wanting to start doing some interview posts, and I decided Kelsey would be the perfect first guest.

Diana: How do you know that this kind of exposure is life threatening for you?

Kelsey: I’ve had several doctors and my allergist stress the absolute importance of me always carrying an Epi-Pen because if I ever had a bad reaction and was without it, I could die. This is because, when I’m exposed to peanuts, even just someone eating a PB and J near me (I don’t have to touch peanuts or eat them), my throat will start to close up and I’ll begin to choke; it feels like I’m being strangled. If the reaction continued without immediate medical attention, I’d die because I wouldn’t be able to breathe or swallow.

Diana: Have you experienced it before?

Kelsey: Yes, I’ve experienced anaphylactic reactions to peanuts before. When I was in Disneyland with my fiancé and our families in September, a woman in front of us in line for a ride opened a treat with peanuts. My throat began to close up, I took instant Benadryl but it didn’t work. My fiancé Ian had to give me my Epi-Pen and call 911, and we spent about 10 hours in the ER room. It was terrifying.

Usually my reactions don’t end up with me in the ER, but every single one of them has the possibility to. And if I didn’t immediately take Benadryl, my peanut reactions would always lead to the ER because unfortunately the reactions don’t just wear off or go away after a while—they get worse.

Diana: Were there complaints (that you know of) from other students during the time your needs were being accommodated?

Kelsey: I don’t know of anyone who complained about not being able to eat peanuts in class. My instructors (after being contacted by the Disability Support Services office at UW Tacoma) would make an anonymous announcement explaining to the class the severity of the situation. Unless I told my classmates, they didn’t know I was the one with the disability. Sometimes they’d talk to me about how horrible it must be for the student with the peanut allergy—how scary it must be. They were always empathetic and concerned, even when they didn’t know that they were talking to the person with the accommodations.

I felt very supported by the student body at UW Tacoma, and still do. I’ve been getting Facebook messages from my classmates about how someone was talking about something with peanuts and it made them miss me. And everyone I talked with was very supportive when I realized I needed to drop my classes for my safety. They told me that I’d be missed but that they wanted me to be safe.

Diana: How has this decision by the school affected you?

Kelsey: I graduated from my community college with high honors, which meant that I had my pick of universities. I had chosen UW Tacoma specifically because of the interdisciplinary focus and the fact my desired major (Ethnic, Gender and Labor Studies) didn’t exist at any of the other Washington State schools.

I’d also hoped to eventually do Master’s work there as well. But now I’m now no longer a student at the UW Tacoma because the school stopped providing me with the predetermined accommodations for my life-threatening, documented disability. I now have two “W”s (withdrawl) on my transcript which will have to be explained when I transfer to another university. This will be a scar on my otherwise outstanding college and university record. I’m also going to be required to pay back Financial Aid for this quarter due to dropping my classes, through no fault of my own, and I’m not certain what sort of long-term effects this will have on my eligibility for Financial Aid in the future from other institutions.

The repercussions of this situation will continue to affect me into the future and throughout my academic career. If I’d been allowed to continue my studies, when I graduated from the University of Washington, I would’ve been third-generation Husky alumni. This was something that was very important to me, and my entire family was excited about it. Not only has my future been affected and my education derailed, my dreams have been crushed, as well. I honestly feel like I’m still in shock.

Diana: What message do you want to share with people who have similar allergies?

Kelsey: To not be embarrassed by their anaphylaxis. I didn’t want to be the weird “allergy girl” and I knew how people could sometimes be hurtful, so for a while I avoided telling people about my anaphylaxis reaction to peanuts as much as possible. But this just meant that I wasn’t as safe. I still don’t like feeling that all introductions practically begin with an explanation about my medical issues, but it’s important. We could die from secondhand food, and if we don’t tell our friends, coworkers, classmates, neighbors, and family then they aren’t able to help keep us safer.

In order to live full lives I think it’s very important for people with anaphylaxis to find allergy / anaphylaxis allies: people who will be willing to go to the movie theater with us at odd times because it’s safer, or who we can trust to act rationally in the middle of a medical emergency, or who will never eat what we’re allergic to around us. Don’t be embarrassed or afraid to find allies. It takes educating people, patience, and a lot of work, but we all need allies who we can literally trust with our lives—because helping to insure we have long lives is what this is all about.

Diana: What message do you want to share with people who don’t seem to understand food allergies?

Kelsey: The difference between mild to even moderate food allergies or seasonal allergies and anaphylaxis is an important distinction for people to know. Anaphylaxis means someone could die, not just feel discomfort, if they’re exposed to their allergen. It’s also so extreme that it’s considered a recognized ADA disability because it impairs breathing.

I’m allergic to a bunch of trees and flowers, cows, tomatoes, soy, dairy, and the list goes on, but none of those—even though some of them are extremely unpleasant to have reactions to and could even result in me missing school or work—are anaphylactic reactions, because I won’t die from them. It doesn’t mean they’re not a big deal, it just means they’re not life-threatening or a disability.

A lot of times there’ll be confusion when someone is talking about an anaphylaxis reaction, but using the word “allergy” because everyone imagines them breaking into hives or sneezing.

There’s also sometimes the misunderstanding that because I’m so sensitive to peanuts, it’ll act as some kind of sixth sense—alerting me to the dangers before I start to have a major reaction. Or that if I see peanut-y products like candies or a PB and J, that I just need to get out of the area.

Unfortunately, by the time that I see something peanut-y or start to have a reaction (my throat starts closing up), it’s too late. By the time I notice, I’m in the middle of a life-threatening medical emergency. The only way to avoid anaphylactic reactions is by not being exposed to the allergen in the first place.

Another common confusion relates to Epi-Pens. A lot of people think that as long as I have my magic Epi-Pen on me that I’ll be fine, but all Epi-Pens truly do is override the anaphylactic reaction temporarily. If I have to use my Epi-Pen things aren’t better, it means that I have to be rushed to the ER in an ambulance before the reactions returns with full force. Basically, it just gives me a little more time (I’ve been told about twenty minutes but I think it’d depend on the severity of the allergy). It’s not a solution; it just provides me with enough time to hopefully get to the ER.

Join the discussion in my post on the seriousness of food allergies. Leave a comment there letting us know your experiences with food allergies and anaphylaxis.

You can read Kelsey’s story in her own words here, and see the news story as well.