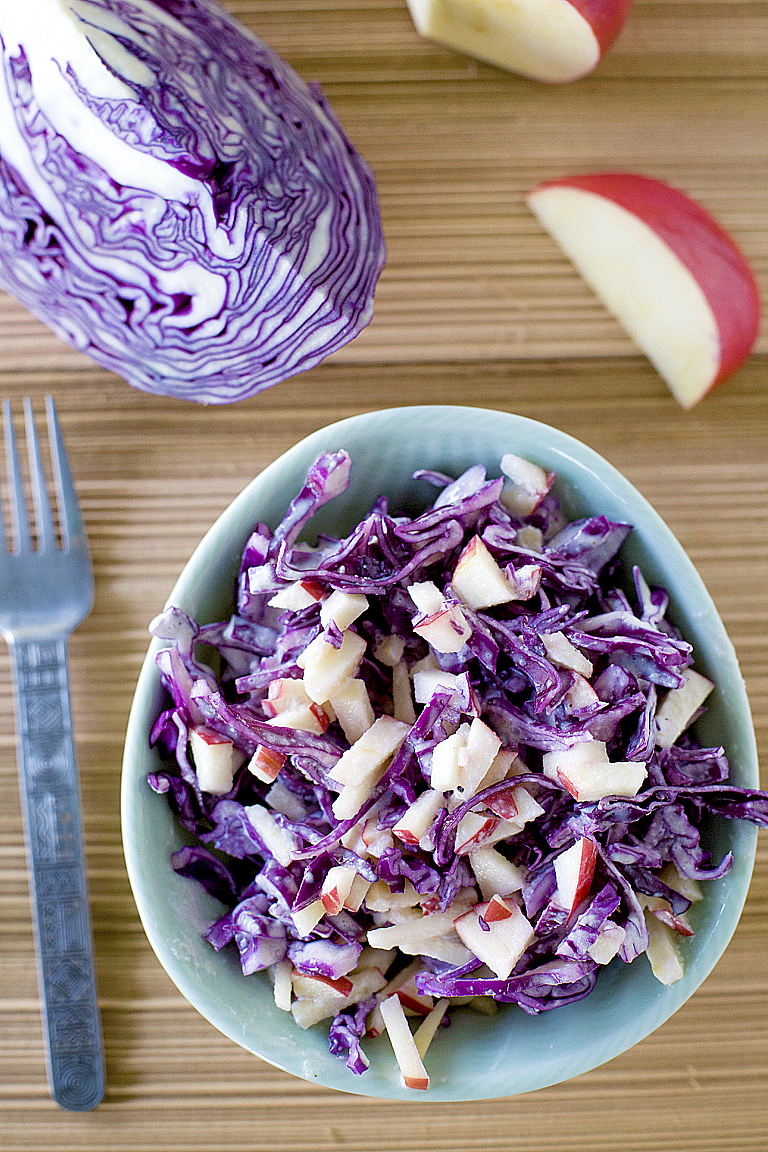 Here’s the cabbage salad I promised you last week.  I figure most people know the basics of how to make cole slaw, but in case you weren’t aware, any salad made primarily of shredded cabbage and dressed in a mayonnaise or vinaigrette is typically known as cole slaw (or coleslaw).  This cole slaw is a very easy apple and red cabbage recipe that used local produce, making it a satisfying side dish financially and ethically (not to mention the great taste!) 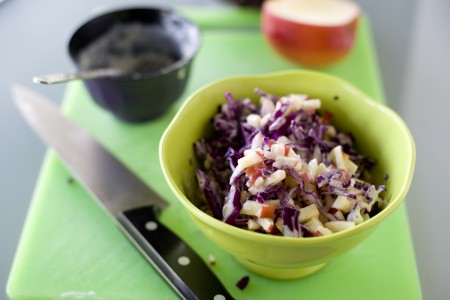 I tend to prefer vinegar cole slaw recipes to the ones dripping in mayonnaise.  But sometimes I want a little creaminess to my slaw and that’s when this cole slaw dressing recipe comes into play.  I just use a few tablespoons of cream, and thicken it up with apple cider vinegar.  The vinegar curdles the cream giving it a taste similar to buttermilk. 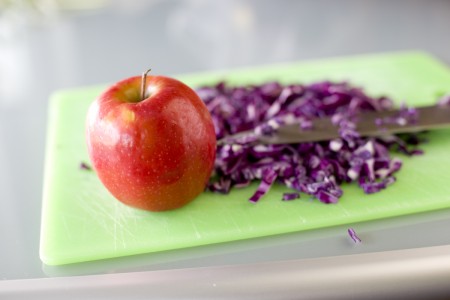 The apple cider vinegar flavor is enhanced by the apples in the salad.  A bit of onion and garlic powder help add some savory flavor and a hint of honey plays on the sweetness of the produce.  I’ve sometimes left the honey out if I have very sweet apples, but most people seem to prefer it with honey.

This is definitely a crunchy cole slaw recipe, not to soggier variety my husband usually prefers.  The good news is,  it’s my first cole slaw that Eric’s actually liked eating immediately after I made it instead of waiting for the crunch to dissipate. 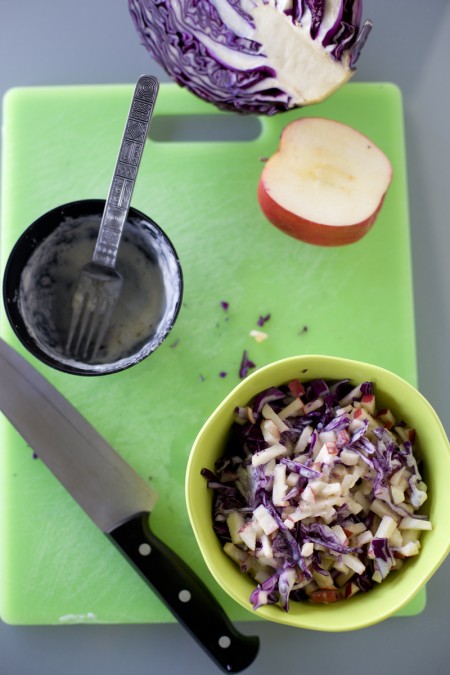 As I’m eating this winter salads, I’m dreaming of the future crop I will grow in my very own garden.  Last year I just planted herbs, kale and tomatoes.  It was our first year in the new house and I needed to focus on renovating the house itself, not much time for gardening.  I pretty much put seedlings in the ground and then ignored them unless I was picking something. 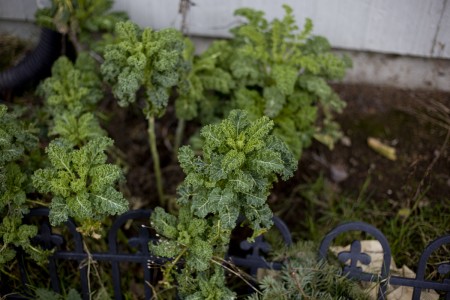 It was a terrible growing season and I got six tomatoes.  The kale and herbs did really well though.  This year I have a plan. In fact I have a “Dream Garden Plan”.  It’s not set in stone, but helps me figure out how I want to use our space. 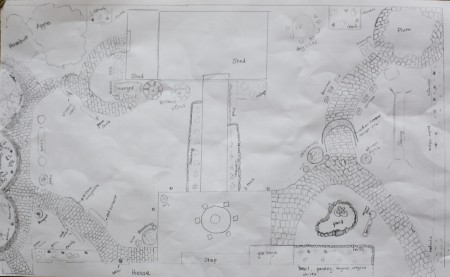 This is probably a five year plan, as much as I’d like to I know I won’t finish this in one or even two years, especially the paths.  It also takes time to get fruit trees and plants established. 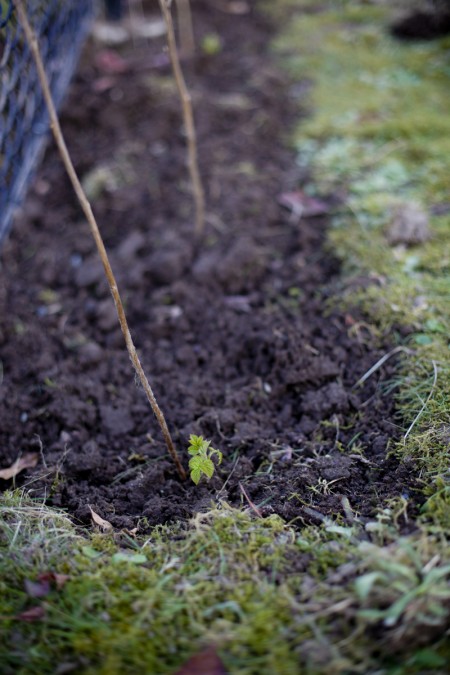 I just got 15 raspberry canes and a thornless blackberry bush from the fruit orchard where we get our apples.  I’ve been working an hour at a time after work (sometimes in the hail!) digging the grass up to plant them.

I grossly underestimated how much time it would take to make my garden plan a reality.  The most difficult part so far is digging up grass and moss to create planting beds.  Although it won’t be time to plant most things for a couple months, I’m trying to get the areas for planting as prepared as I can. 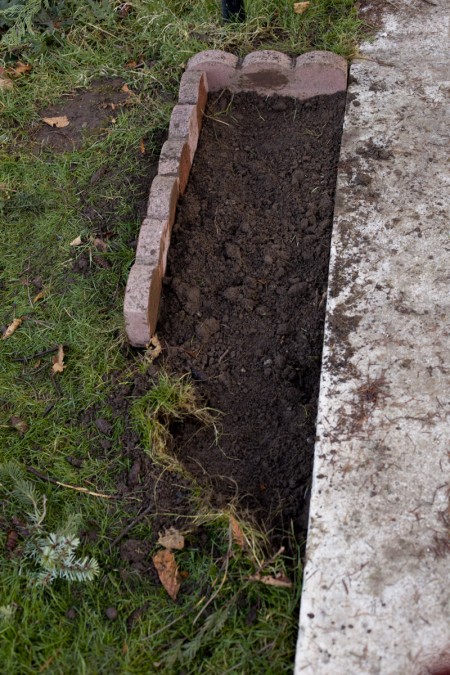 The first day I started, I had 45 mintues of free time between work and starting dinner.  I decided to try and dig up a 15 inch wide strip of grass along the sidewalk in our back yard in that time.  Rather than getting a 16 foot long bed dug, I got three feet done! 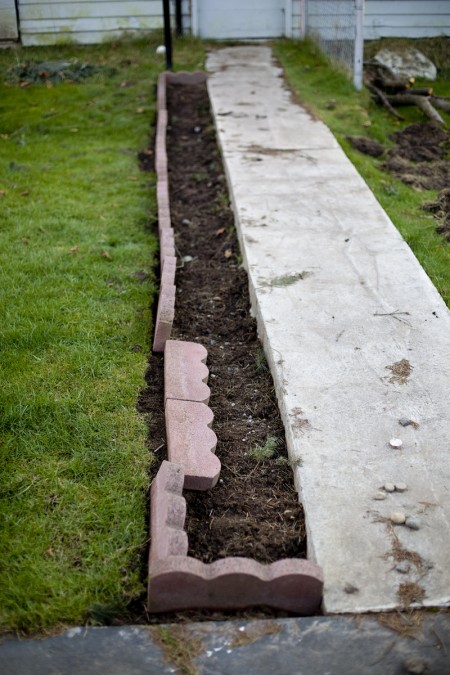 It was better than nothing though and eventually I got it all done.  Once the ground is a little softer and drier I’ll work in some compost and mulch and seat the bricks in better. 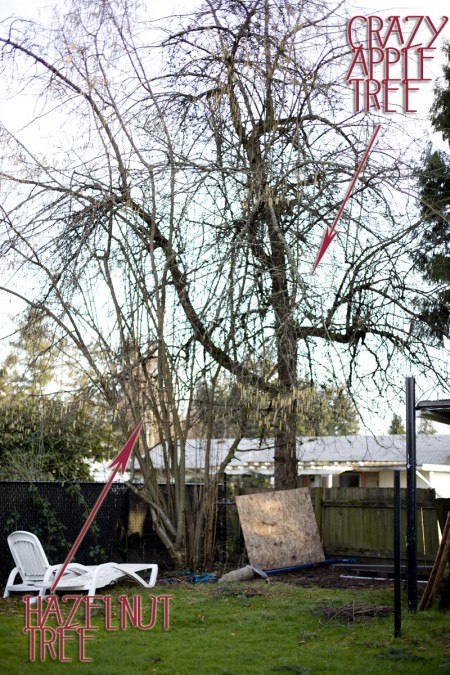 We also have a hazelnut tree, apple tree and plum tree.  Unfortunately they are severely overgrown and haven’t been pruned in years and years.  I’m hoping to find someone to come take a look at them and tell me if they’re salvageable or not.  I hate to cut down perfectly good trees, but right now they have branches falling off and seem really unhealthy.  Any suggestions?

I’d love to hear if you have any gardening advice or are just learning to garden yourself.  What foods do you want to grow for yourself? 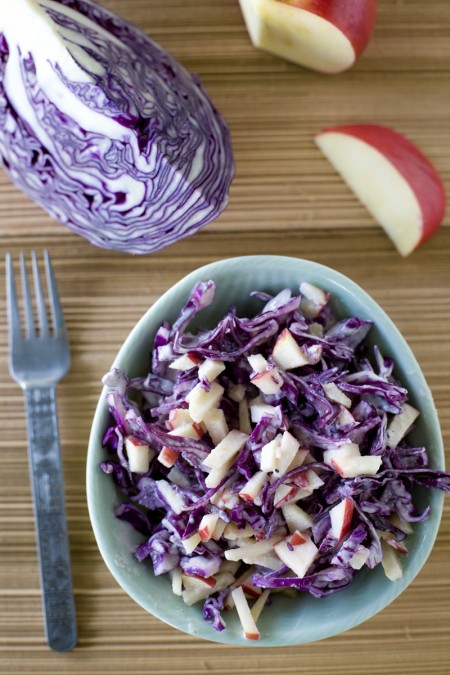 Toss together the chopped cabbage and apple in a large bowl.  In a small bowl whisk together cream and vinegar.  Let stand one minute to thicken.

Whisk honey, onion powder and garlic powder into the thickened cream.  Drizzle the dressing over the cabbage and apples and toss to coat.

Vegetarian/Gluten Free: Yes to both.