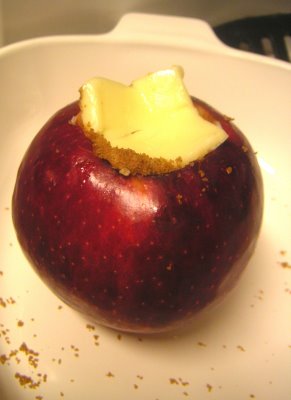 Ooh-la-la! This was so delicious! Thank you so much Elise for posting this wonderful recipe

(which she adapted from Joy of Cooking). I of course adapted it as well so now it’s probably even less like the original recipe. But I think that’s what cooking is all about 🙂
I’ve been trying to make fruit a part of our meal, as typically we have it as snacks, so if we don’t snack, no fruit! I decided this was not a healthy choice and something easily remedied. Sometimes it’s just by making fruit look fancy, it seems so much nicer to eat when it’s presented well. 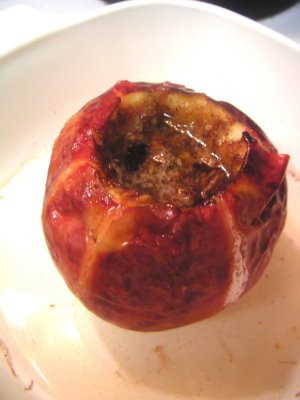 Sometimes I use the fruit for dessert, granted adding sugar makes it a little less healthy, but we don’t normally eat dessert anyway and it’s certainly healthier than cake or cookies. So I have been on the look out for simple fruit dessert or appetizer recipes, and was so excited to stumble across Baked Apple’s when exploring Elise’s lovely blog.
Eric’s favorite dessert is apple and I thought this would really carry those flavors. I was right! I just made one apple for the two of us to share (which is plenty after a full meal), so here’s my version of Baked Apple goodness. (no need to be exact with the measurements, they’re for the OCD people, I just threw stuff together) 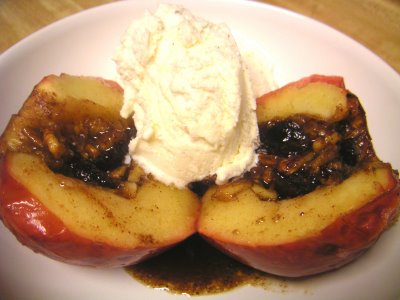 Using a paring knife, cut a cylinder out of the center of the apple. Work diagonally, it’s easier, and use a spoon to help scrape it out.
Mix brown sugar through spices in a small bowl. Use a spoon to stuff into your apple. Place butter over the top. place in a small baking dish. Pour about a 1/4 inch of boiling water into bottom of the dish. Bake 25-30 minutes. Spoon the juices over the apple a few times.

To serve, leave whole, cut in half, or chop up and top with vanilla ice cream.