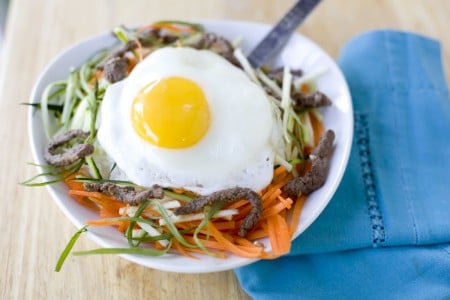 Bibimbap, Bibimbap!  I just love saying it!  Go ahead, try it out.  Say it Bee Bim Bop.  Isn’t it fun?  But more than fun to say, bibimbap is fun to eat, and even good for you!  It’s a signature Korean dish consisting of rice, an egg and various vegetables, and often made with beef.  It’s so popular in Korea that it even has its own museum!  The great thing about this Korean recipe is that you probably have most of the ingredients already.  The only one that may be new to you is gochujang (or kochujang), a spicy chili paste.

Korean cuisine is very in your face.  It’s characterized by smoky flavorful meat, bright fresh vegetables and fiery hot peppers.  Bibimbap is no exception, though the execution may differ from one cook to another.

The one consistency to all bibimbap recipes is that it’s a complete meal.  You get your starch, protein and vegetables all in one bowl!  But the rules stop there, and even that isn’t a rule.  Sometimes it’s served with just rice and an egg in the bowl and all the vegetables, meat and sauces are in separate bowls for people to take what they’d like to add to their bowl.  Sometimes, the egg isn’t even fried, just a raw egg poured over the hot rice to cook slightly from the heat in the bowl.

According to clickkorea.org, the first ever mention of bibimbap is in Siuijeonseo, a cookbook compiled in the late 1800s.  The ClickKorea article is worth a read, listing four different theories for how bibimbap came to be.  My personal favorite is the ‘Donghak uprising theory.’   They say “When the Donghak uprising (a revolutionary movement led by peasants to protest the rampant corruption of government officials and the encroachment of foreign powers) broke out in the Gobu area of the Jeolla provinces in 1894, the Donghak peasant rebels were forced to mix their rice together with side dishes because of their lack of bowls and plates.”  I love the idea of this delicious dish being born out of necessity by the underdogs fighting for their rights. 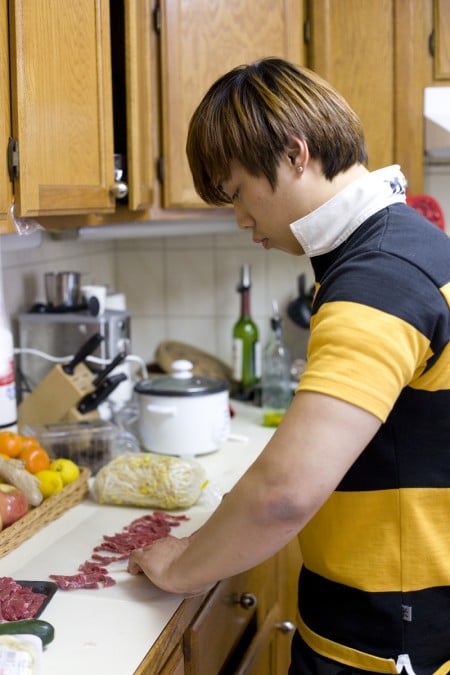 Our exchange student from Korea, who goes by his American name Eric which has led to me calling my husband “Babe” 90% of the time, was excited to teach me how his mom makes bibimbap.  I eagerly took notes and asked questions through every step.  He wanted to make sure I knew that there’s no set formula, you can really do whatever you want for bibimbap.

It’s a dish that’s meant to help use up leftovers.  When you have small bits of meat, a few vegetables, scraps of food, they can all go into your bowl.

We didn’t make ours from leftovers though, we bought a month’s worth of groceries that day so everything was fresh.  Here are the details on how we made our bibimbap.

Beef: You want very thinly sliced steak cut into strips for your bibimbap.  We get our steak from a farm, but we did buy some for this recipe because we didn’t have any thawed.  If you are buying steak in the grocery store, use a cheap cut.  In this recipe it’s sliced so thinly that you won’t notice if it’s a little tough.  I rarely buy meat pre-sliced, I just put the steak in the freezer for 15 minutes to make it easy to slice.  But at the Korean grocery store, pre-sliced ingredients (meat, vegetables, fish, etc) cost the same per pound so we went the easy route.

Vegetables: You can seriously use any vegetable.  They just need to be thinly sliced.  For long vegetables like carrots, zucchini or cucumber, I recommend a julienne peeler.  Eric was pretty impressed with how fast it made the chopping go!  It’s a dream kitchen tool come true.  You can slice mushrooms, broccoli, cauliflower or peppers into small pieces to add.  You can also use various greens; baby spinach, watercress, parsley, kale, bok choy, green onions.  Bean sprouts are also a very popular addition.  We left all the vegetables raw, except the sprouts which I steamed very slightly (forgot to add them for the pictures though!).  I really liked the contrast of crunchy vegetables with the soft rice and chewy beef. 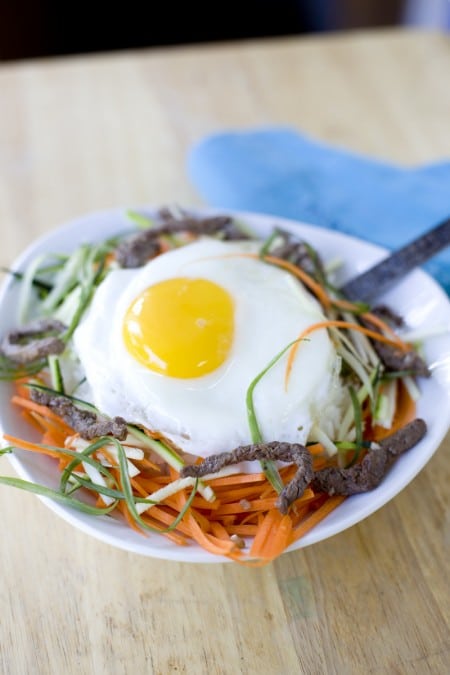 Egg: As I mentioned above, you can break a raw egg over your hot rice as the base of the dish.  I might try that one day with an egg fresh from the farm, but until then I’m sticking with a fried egg.  They’re simple to make.  I wipe out my skillet with a paper towel after cooking the beef and then fry the egg in what little oil still coats the pan.  Just heat it on medium high and break an egg into the pan.  Let it cook 3-5 minutes until it’s solid enough to pick up with a spatula.  You don’t want to overcook it because the yolk should be runny.  Once your bowl is filled, everything gets mixed together and the runny yolk mixes into the whole dish.

Gochujang: This spicy sauce is for Korean food what ketchup is for American food, it’s good on anything and everything!  I’ve seen it spelled with both a K and a G, so look for either.  It’s a dark red paste with a rich and spicy flavor.  Typically it’s made with fermented soy, glutinous rice powder, chili powder and salt.  It sometimes contains a sweetener as well.  Gochujang is ridiculously expensive on Amazon.  It was only $3 at the Korean market.  If you don’t have an Asian market near you, I recommend buying it Hmart.com instead.  While traditionally it is gluten free, it often contains barley now, so if you need a gluten free sauce I recommend using sriracha or, even better, making your own gluten free gochujang.

Sesame Oil: Sesame oil is a vegetable oil made from sesame seeds.  It’s very popular in Korean cuisine for it’s spicy quality, it’s not spicy like a pepper but does have a bit of a bite to it.  Sesame is one of the first crops to ever be pressed for oil.  There are a variety of colors for sesame oil, pale yellow is a cold pressed sesame oil, the dark brown oil typically used in East Asian cooking is from toasting the seeds before pressing and has a stronger flavor.  I always buy the dark brown because when I’m using it I want the flavor to shine through.  You can get this in your regular grocery store but I can buy it by the gallon at an Asian grocery store for the same cost as a small bottle at my local grocery stores.

Alright, are you sold?  Don’t you want to run to the fridge right now to see if you can make this?  Oh and by the way, just like my Vietnamese Steak Sandwich, this is a great starter recipe for getting the man in your life to like Asian food. 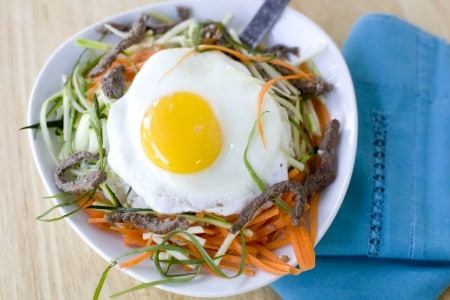 Approximate cost/serving: If you use cheap vegetables, this is a pretty affordable dish, especially because there is very little steak.  It will be even cheaper when I’ve grown my own vegetables!  This came out to $8 with everything from the Asian grocery store, including the rice.  It served 4 of us, but these were HUGE servings and our boys ate double what we did.  Still, we’ll call it $2 a serving for a complete meal.

Vegetarian/Gluten Free: You can definitely skip the meat and make a vegetarian version, though it wouldn’t be bibimbap without the egg.  For gluten free, use sriracha in place of gochujang or make your own.  Make sure your soy sauce is gluten free as well.

Posts may contain affiliate links. If you purchase a product through an affiliate link, your costs will be the same but Eating Richly Even When You're Broke will receive a small commission. This helps us to cover some of the costs for this site. Thank you so much for your support!
Nutritional and cost information is for estimating purposes only, and subject to variations due to region, seasonality, and product availability.
Share2
Pin52
Yum
Tweet
Greek Salad Pita Pocket Recipe
Garlic and Herb Oven Fries Recipe