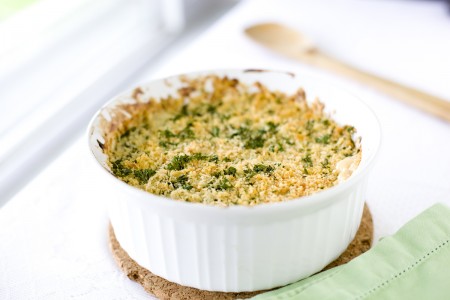 I’ve avoided writing about what’s going on in Japan.  I want this site to be fun, informative and full of joy.  Yet it’s hard to make your writing cheerful when your heart is breaking.  I was planning a lighthearted post on picky eaters and vegetables, and playing with a way to make cauliflower appealing to children.  Instead I just kept thinking “Comfort food, the world needs comfort food.”  So I combined the two.  This Cauliflower Mac and Cheese recipe is not only a kid friendly recipe, it combines cheesy cauliflower and macaroni and cheese, two of my favorite comfort foods.  It’s also healthy, with cauliflower replacing the pasta and milk instead of heavy cream.  If you just want the cauliflower recipe, feel free to skip to the bottom, I understand.  If you want to read about my experiences doing disaster relief and how they’ve shaped me as a person, read on.

Laying in bed last night I realized that I never really processed my feelings about the disaster relief experiences I’ve had.  I’ve told lots of stories, written letters of my experiences, but I haven’t truly gone through a recovery process for the emotions ﻿I experienced.  There’s something called an inventory, where you make a list of everyone who has hurt you and everyone you have hurt.  Then you write about how they hurt you, how it affected you then, how it affects you now, etc.  Once you’ve got that done you can go through the forgiveness and amends process.  I’ve done this, and now I’m able to do a kind of daily inventory without even trying.  If someone has hurt me or I realize I’ve hurt someone else, I go to them immediately to do forgiveness and amends.  Makes it much easier to sleep at night!

The thing is, all those experiences involved the wrong actions of a person.  The things I saw in some of the countries I went to were not hurtful things done to me, they just hurt. 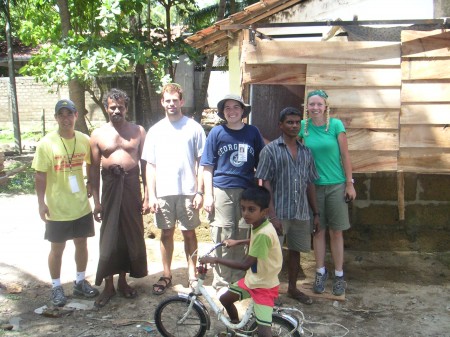 When I got off the plane in Sri Lanka, the four of us were picked up in a van and rode 6 hours to the remote coastal village where we would be building shelters.  We met the village chief and drank hot Tang in the one shelter already built.  We saw the tents donated by World Vision that no one could sleep in because corrupt politicians claimed them as their own and charged rent to use them. We met the villagers, took in their empty eyes as child after child numbly recited how many parents and/or siblings they lost in the tsunami. 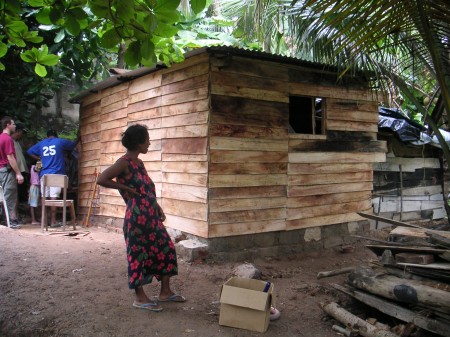 As we were meeting the chief, a man burst into the shelter shouting frantically in their native language.  Apparently the news had said another tsunami was potentially on its way.  If it came, we would have no time to escape, and would have to simple climb a tree and hope it could withstand the torrent.  My teammates looked alarmed, but I had a fascinating calm in my spirit.  I knew I was in the right place.  Whether I died, or survived and was able to help in the rescue efforts, I was where I belong﻿ed.

Fortunately, like most of Hawaii just experienced, it was a false alarm.  The waves were big that day, but no further damage was sustained. 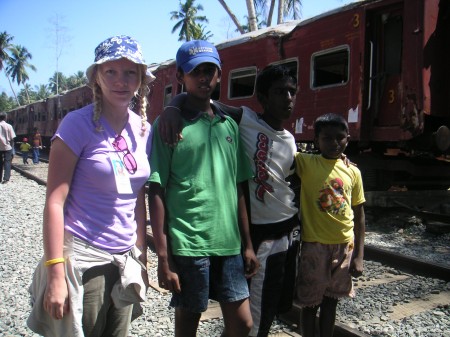 Then we went and visited a few other villages.  We saw signs up saying, the government won’t give us the food that’s being donated.  We saw babies dying of starvation because the mother who should be nursing them was killed in the disaster.  There was a train that had stopped after the first wave of the tsunami, letting people climb on top to escape the flood waters.  What the engineer didn’t know was that a second and third wave were on the way.  Everyone on the train was killed, except for one small boy whose mother had shoved him into the luggage rack where he clung for dear life as the train was swept away and began to roll over and over.  When it finally stopped, he was the only one above the water line.  The dented top of the train cars, evidence of the palm trees they slammed into with each roll, told a story of destruction we couldn’t have imagined otherwise.

We wouldn’t start work until the next day, but we had one more stop before heading to our home for the next week.

We went to the home of a local pastor.  Although Hindu was the prominent religion, there were small Christian churches that had faced great persecution before the tsunami.  In fact the church we went to the following Sunday had been told that if they tried to hold Christmas services they﻿ would all be killed.  No one knew the real destruction that would occur that Christmas.

At the pastor’s house, we watched videos.  There were bodies, bodies everywhere.  Not like a tv show or movie where I can tell myself it’s not real, but men, women, children…dead…forever.  There were screaming mothers yanking their children from the water, frantically performing CPR.  We wept with joy at the children who finally coughed and emptied their lungs, knowing they were brought back from the dead.  We wept in agony for the children who desperately clung to the battered body of their parent who was just too broken to be brought back.

Finally we went “home”, utterly beat up and discouraged.  How could we possibly make a difference?  These people had been through so much.  We were just four Americans, we were nothing in the wake of such devastation.  Finally I snapped out of it.  “Let’s do what we came here to do guys!”  There was some confusion to this statement, because we didn’t actually know what we would be doing before we arrived.  It wasn’t until we got to the village that we found out we would be building shelters. 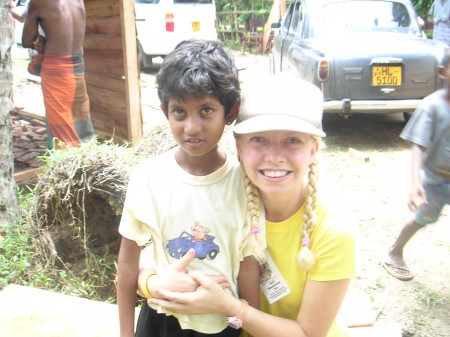 But no matter what our task was going to be, I had known from the beginning what we were really there to do.  “We’re here to bring hope.”  Hope.  The word was like the bright beam of a lighthouse offering warmth and safety in the bleakest of storms.  We went to bed excited, and woke up with a mission.

The following day we had breakfast at the pastor’s house then rode over to the village.  It was shocking to see the faces of the people before they saw us arriving.  Never had I seen so many living people look so dead.  Once they saw us, they smiled and called out, welcoming us.  But I knew that wasn’t the norm.

We got right to work, four of us trying to build the simplest of shelters.  Four walls, one doorway, one window, always facing the sea.  The ocean, which used to be the source of life for these fisherman and their families, now a source of terror.

I noticed the villagers all stood around watching us work.  At this rate we would be lucky if we got one shelter built in the four days we had to work.  I asked our host how to say a couple words in the native tongue, come, and thank you.  I called to the two boys who were obviously the leaders of the children.  They were around 12 years old, both of them lost both their parents and were taken in by other villagers. 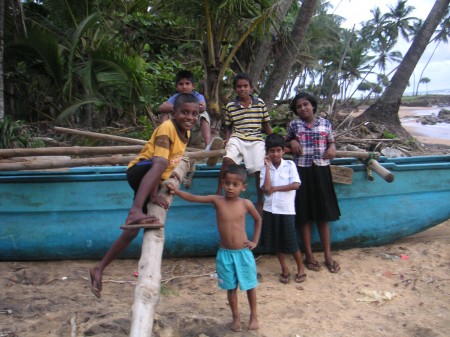 I demonstrated to the boys that I “needed” them to hold the board while I nailed it.  For the next two hours these boys became my personal helpers.  We carried boards together, they held each board in place while I nailed it up.  I even let them take a turn at nailing. 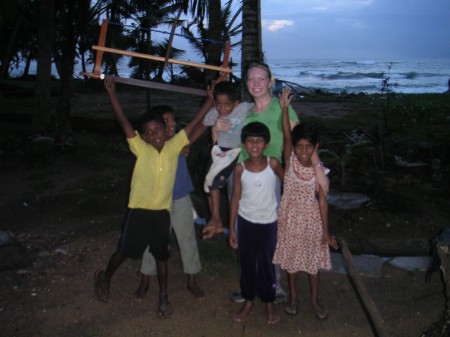 We left for lunch, and when we returned, the boys were proudly each holding a hammer, a group of 15 children behind them waiting for their turn to help.  Soon we had jobs for each of the children, sweeping the foundation of the house that used to be there before we began building around it, holding the carpenter’s square (which we all called triangle to make it easier to ask for) as we drew our lines, passing the pencil between the adults.  In fact the kids were having so much fun, that it had the desired effect on the adults. 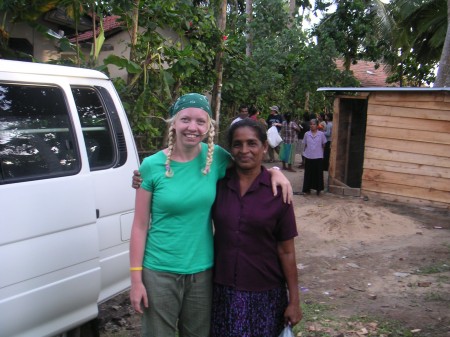 By the end of the day, we had all the men of the village helping as well.

When we arrived the next morning, it was a village of very different people.  Even before they saw us, their faces had a softness to them that had not been there the day before.  They knew something was different too.  When we arrived they wanted to give us tea (which was powdered Tang, not hot, something we weren’t supposed to drink because of the risk of the water being contaminated, but that we couldn’t refuse). 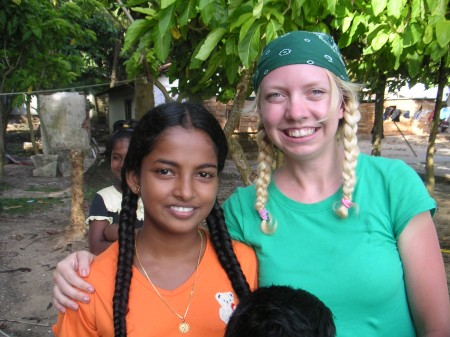 We struggled to contain our emotions as the villagers went from the shambles of one house to another, looking for chairs that weren’t broken, teacups and saucers.  They had practically nothing, yet wanted to honor us with what they could find. 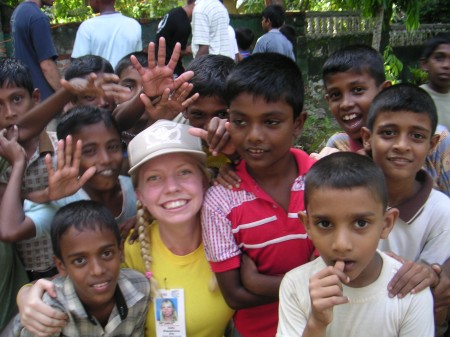 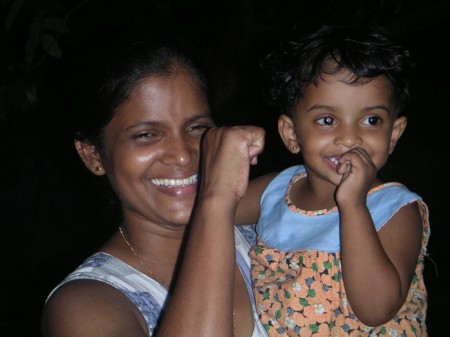 That’s my prayer for the people of Japan.  I know there are a lot of financial and physical needs facing them right now.  But I think their greatest need is hope, and that is my greatest prayer for them. 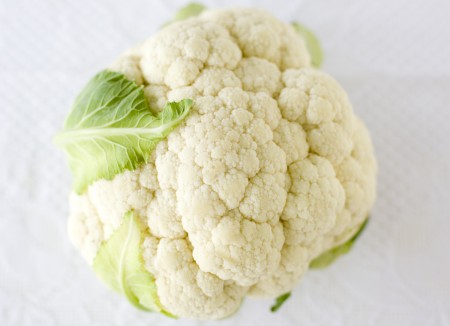 Now for the comfort food!  I have to put all my pictures in this post because I’m just so proud of them!  I tackled two of the hardest foods to photograph, white food and casseroles. 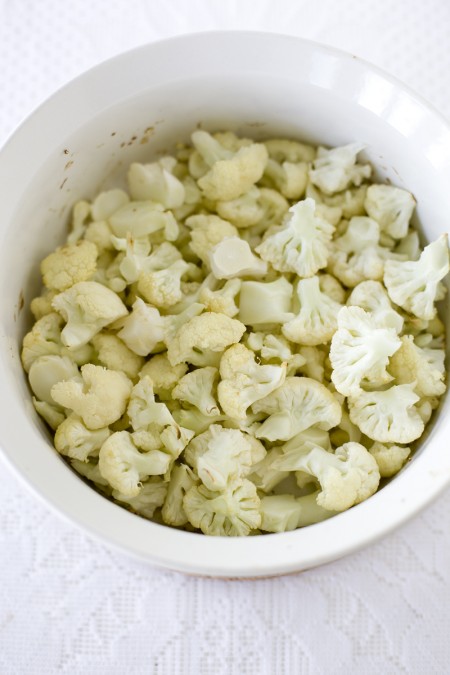 I think this is Eric’s new favorite casserole.  I love it because not only is it easy and oh so comforting, but it’s also very friendly to a lot of dietary restrictions.  It’s vegetarian, gluten free, and it’s replacing the typical pasta in macaroni and cheese with a non starchy carb so diabetes friendly. 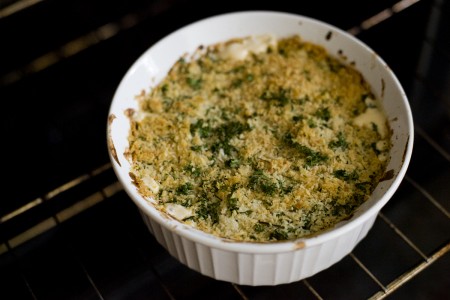 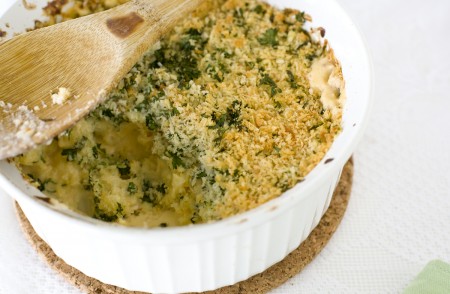 After the success of this recipe, I’m thinking of quadrupling my garden space set aside for cauliflower! 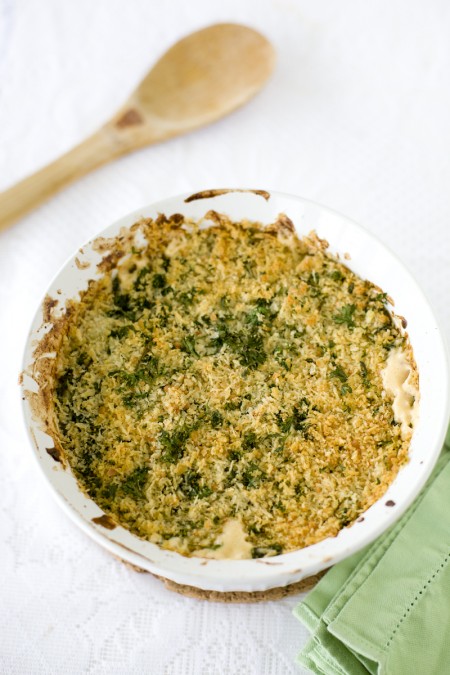 Anyway, whether you’re dealing with working through an emotional experience, or simply worn out from a busy day, here’s the comfort food you can eat without feeling guilty later. 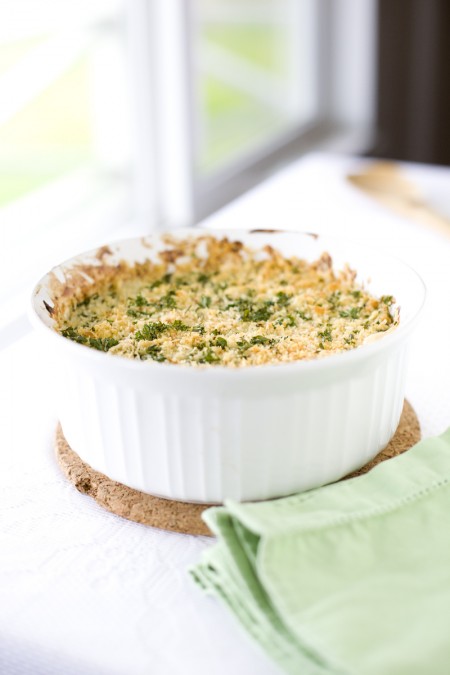 Cheesy and creamy, even better the second day.  Enjoy, my friends! 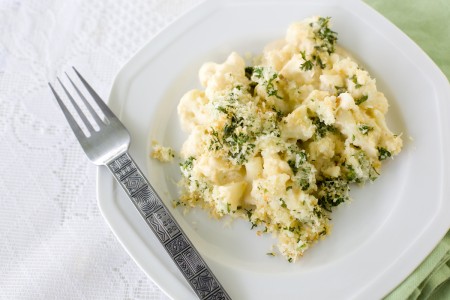 Approximate cost/serving: The head of cauliflower cost me $3.  We get our dairy at Sam’s Club which is the cheapest in our area, especially for cheese, butter and sour cream.    The panko we get at an Asian market, you can make your own breadcrumbs from leftover stale bread if you have some to save a little more.  This cost about $3.80 to make four servings so about 95 cents a serving.

Vegetarian/Gluten Free:  Totally meatless though it does have lots of dairy.  For gluten free you need to use gluten free breadcrumbs.  I like making them from rice Chex.

Posts may contain affiliate links. If you purchase a product through an affiliate link, your costs will be the same but Eating Richly Even When You're Broke will receive a small commission. This helps us to cover some of the costs for this site. Thank you so much for your support!
Nutritional and cost information is for estimating purposes only, and subject to variations due to region, seasonality, and product availability.
Share
Pin111
Yum
Tweet
Eggs and Bacon Spinach Salad Recipe
Shrimp, Blood Orange and Fennel Salad Recipe