Today’s Hunger Challenge recipe is a simple chicken pasta recipe with juicy bites of pan fried chicken, peas that burst in your mouth with sweetness, and a rich creamy parmesan sauce that’s so much healthier than it tastes.  Oh and good news: I no longer feel sick and can actually eat it!  There were definitely some things that I did differently for this recipe because of being on a food stamp budget. 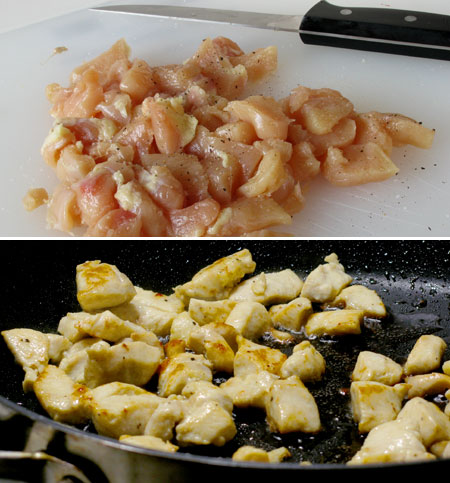 I normally would make this with cream and butter, but those weren’t in my budget.  So I used milk and oil; canola oil, not olive oil which is more expensive.  I would also prefer fresh grated parmesan, but went for the stuff in the green can (much more affordable).  I bought the chicken breast from out local Latino market, where meat is really affordable.

I thought I’d bought 2 chicken breasts (for only $3), but as I unwrapped the package and began unfolding slabs of raw meat, I realized it was actually ONE… GIGANTIC chicken breast.  We’re talking the Dolly Parton of chickens!!!  There must have been major hormones in that thing, surely the poor chicken couldn’t even walk without toppling forward.  Not as reassuring as the organic free range chickens we can buy at a farm down the road.  But they’re $12 a chicken, and though I can stretch that into 10 meals, it was out of the price range for the week. 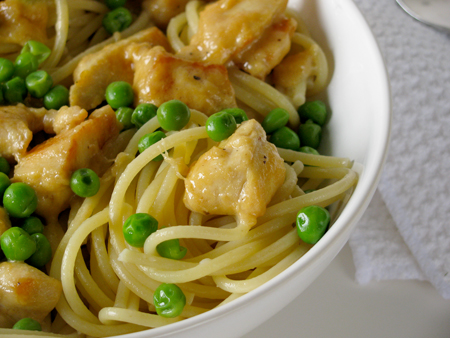 A couple tips for shopping on a tight budget:

–Work the ethnic markets. I included some Asian and Mexican ingredients in my shopping list, and ethnic ingredients are almost always cheaper in the appropriate ethnic grocer.  If you’re fortunate enough to have Latino and Asian grocers near you, check them out!  A 1 gallon jug of soy sauce at the Asian market costs the same for me as the 12 oz bottle at a regular grocery store.  I know, crazy!  Even some ingredients like sugar were cheaper at the ethnic store.

–Stretch your ingredients. I planned meals that used a lot of the same ingredients.  Although it took a bit more forethought than usual, it saved me money.  For instance, the chicken breast I chopped all at once, but will be using it in quesadillas, stir fry, and fried rice as well.  I marinated half of it in soy sauce, rice vinegar, brown sugar, lemon juice and pepper.  I cooked the other half and then save half of that for the quesadillas.  I also bought one lemon for 30 cents, juiced it, and am using the juice in 3 different recipes (like the red cabbage salad below!). 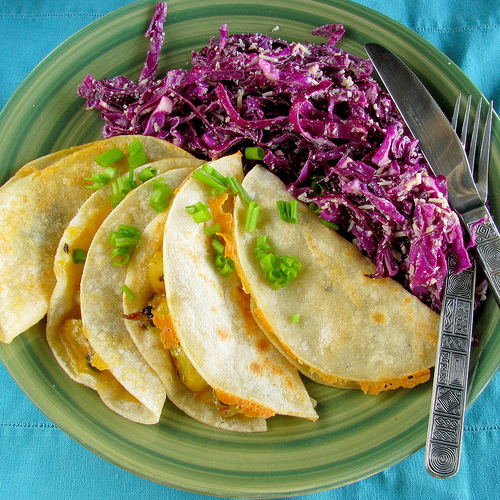 – Think of creative ways to change up a dish. For example, last night we had potato quesadillas (so easy my husband made them!).  Tomorrow night we’ll have the same quesadillas with chicken and peppers instead of potatoes.  Completely different taste but similar ingredients.

– Look for Bulk Bins. Pastas, grains, oatmeal (which we’re having for breakfast every morning), nuts, dried fruit, all more affordable in the bulk bin section of a grocery store.  Weigh as you scoop so you don’t go over budget, but you can really stretch your food stamps this way.  At some stores you can even get spices!

– Sales, Sales, Sales.  I normally buy Tillamook cheddar, and was not looking forward to getting the store brand of cheese.  But Tillamook was on sale to the same price as the store brand!  Several items had the better brand on sale, and several times two smaller items were cheaper to buy than the larger size.  Check the cost per whatever (ounce, serving, lb) it’s usually listed smaller on the sign. 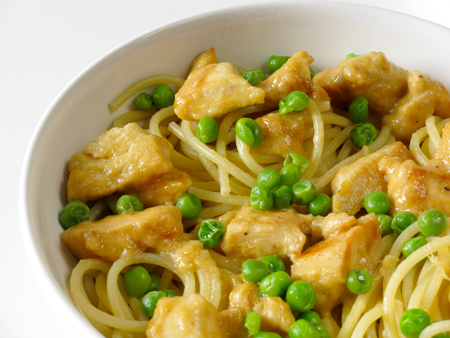 Bring a large pot of water to boil.  Sprinkle the chopped chicken with salt and pepper.

Add canola oil to a skillet and turn heat on medium high.  Add the seasoned chicken.  Start cooking your pasta in the boiling water according to package instructions.  (In the last 2 minutes of pasta cook time, you will add frozen peas).

Cook the chicken for about 5 minutes, or until completely white, stirring occasionally.  Bring heat up to high to brown chicken to a golden color, cooking another 2-3 minutes.

Add lemon juice, milk and parmesan to the skillet of chicken and stir well.  (Don’t freak out if the milk curdles!  It gives it a tangy buttermilky flavor).  Reduce heat under the skillet to the lowest setting.  By now the pasta  should be almost done so add the peas and let it return to a boil.

When pasta is done, drain it completely and mix the chicken and sauce in with the pasta and peas.  Top with additional parmesan if desired.

Approximate cost/serving: I got the chicken so cheap, that this whole meal cost only $1.85 for the two of us.  That means just 93 cents a serving!