This authentic chile relleno recipe is a traditional Mexican dish of flavorful chiles stuffed with cheese, battered and fried, then smothered in a homemade sauce. 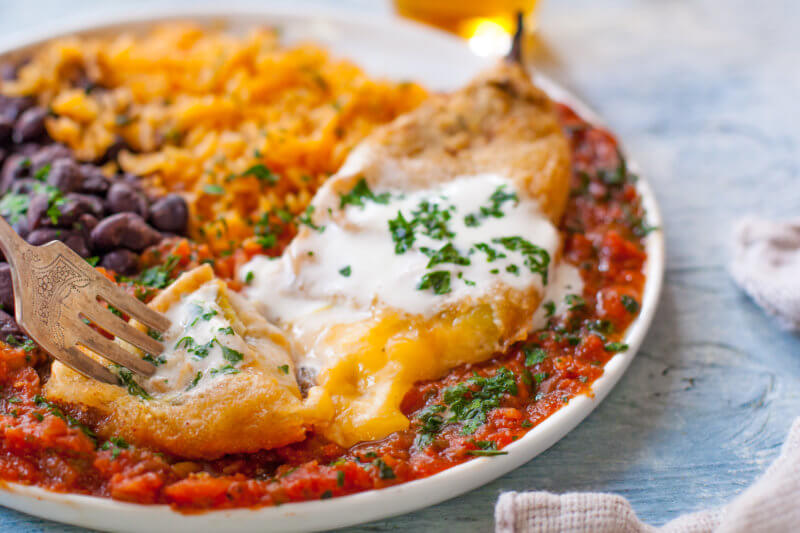 I’ve talked through this recipe with several chefs from our trips to Mexico, and know it’s the real deal. While there are a lot steps to making chile rellenos, it only takes about an hour and the end result is an impressive explosion of flavor and texture that is well worth the effort.

WHAT IS CHILE RELLENO?

WHAT KIND OF PEPPER IS USED IN CHILE RELLENO? 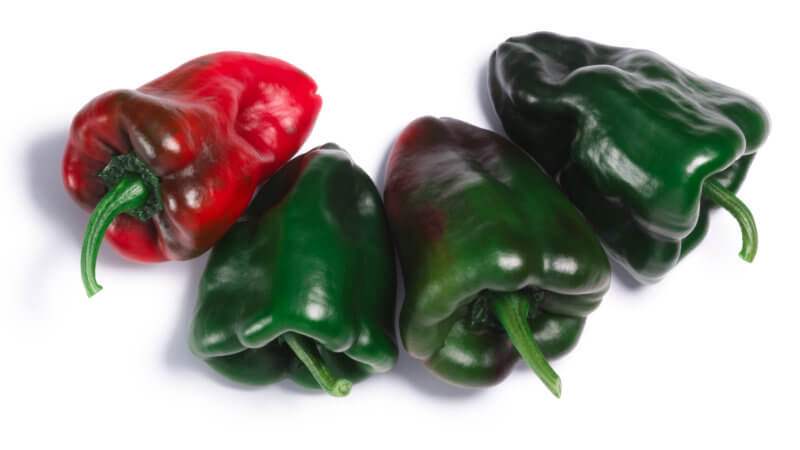 You can use either anaheim peppers or poblano peppers to make chile relleno. Just go with whatever pepper is easily available to you.

If you have both options, choose the pepper that matches the flavor and level of heat you would like.

We use poblano peppers because I find the shape really easy to work with.

Poblano chiles have low levels of capsaicin, so they are lower on the scoville scale (1,000-2,000) which measures the spiciness of chiles. This mild chile is also called ancho chile when dried.

Here is a Scoville Scale chart if you’d like a guide to how spicy peppers are. 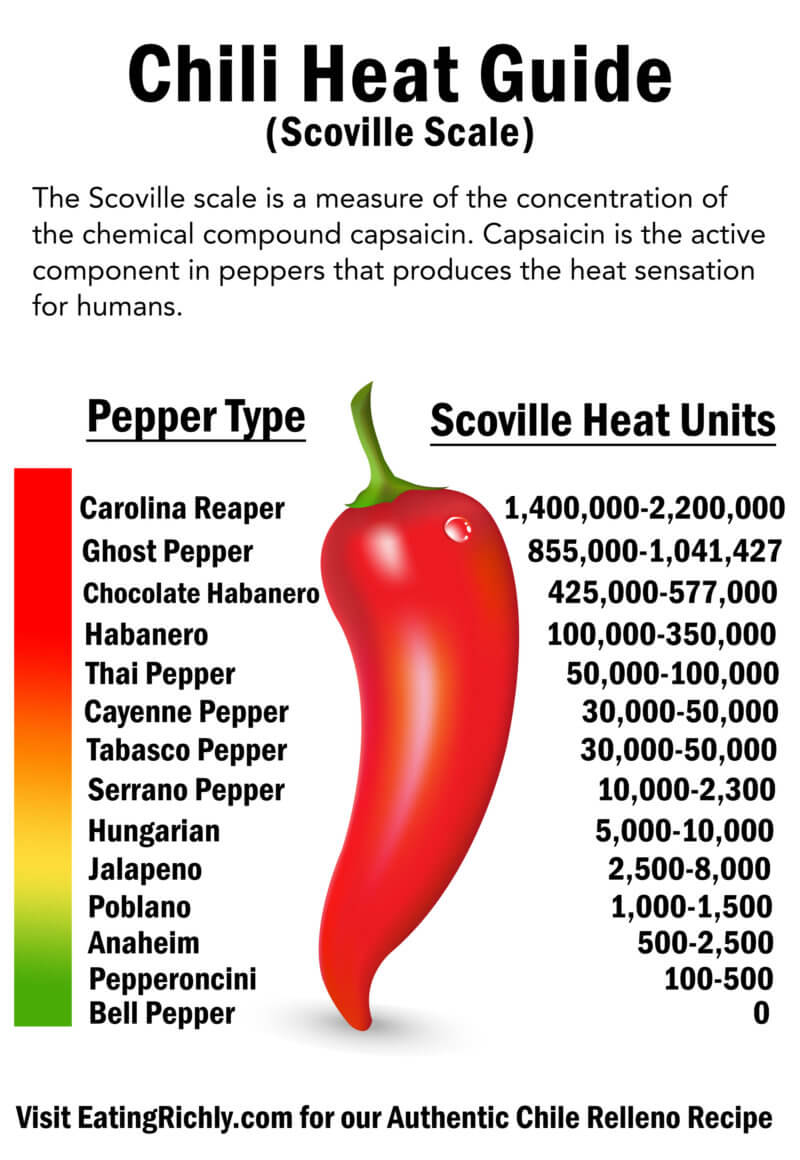 We typically choose poblano peppers so our kids don’t get an anaheim on the hotter end.

For reference, both poblanos and anaheim peppers are milder than jalapenos which are 2,500-5,000 on the scoville scale. I use a jalapeno in the chile relleno sauce so the sauce is a bit spicier than than the stuffed peppers.

HOW TO MAKE CHILE RELLENOS

HOW DO I ROAST POBLANO PEPPERS?

Roasting your poblano peppers is actually quite easy. You can use an open flame or grill, or just roast them under the broiler. 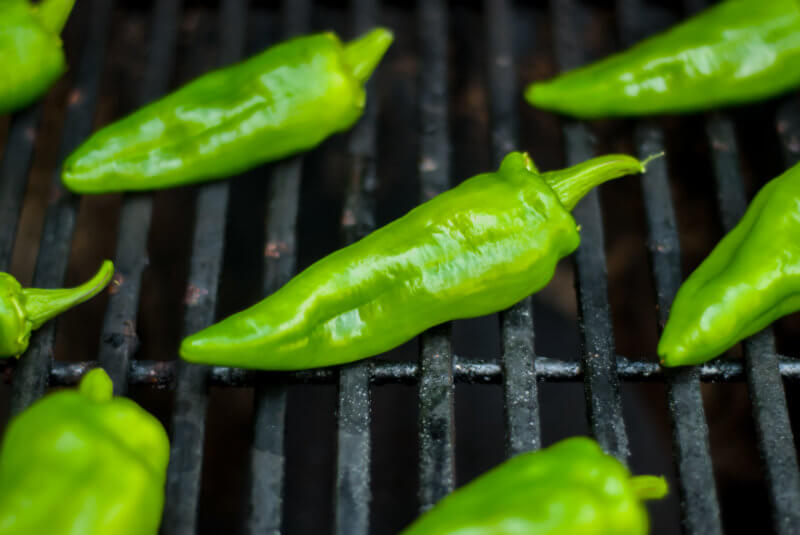 If your pepper tears, don’t panic. The chile relleno batter works like a glue and can hold it together.

Brining your peppers is an important step because it adds a LOT of flavor to the chile rellenos. The brine is a simple mix of salt and vinegar in water. Just a few minutes of soaking the roasted peppers helps to really bring out the flavors of the peppers.

HOW TO MAKE CHILE RELLENO SAUCE

Chile relleno sauce is a spicy, aromatic, tomato based sauce that’s pretty easy to make at home. You can even make it a day or two in advance and reheat to serve. 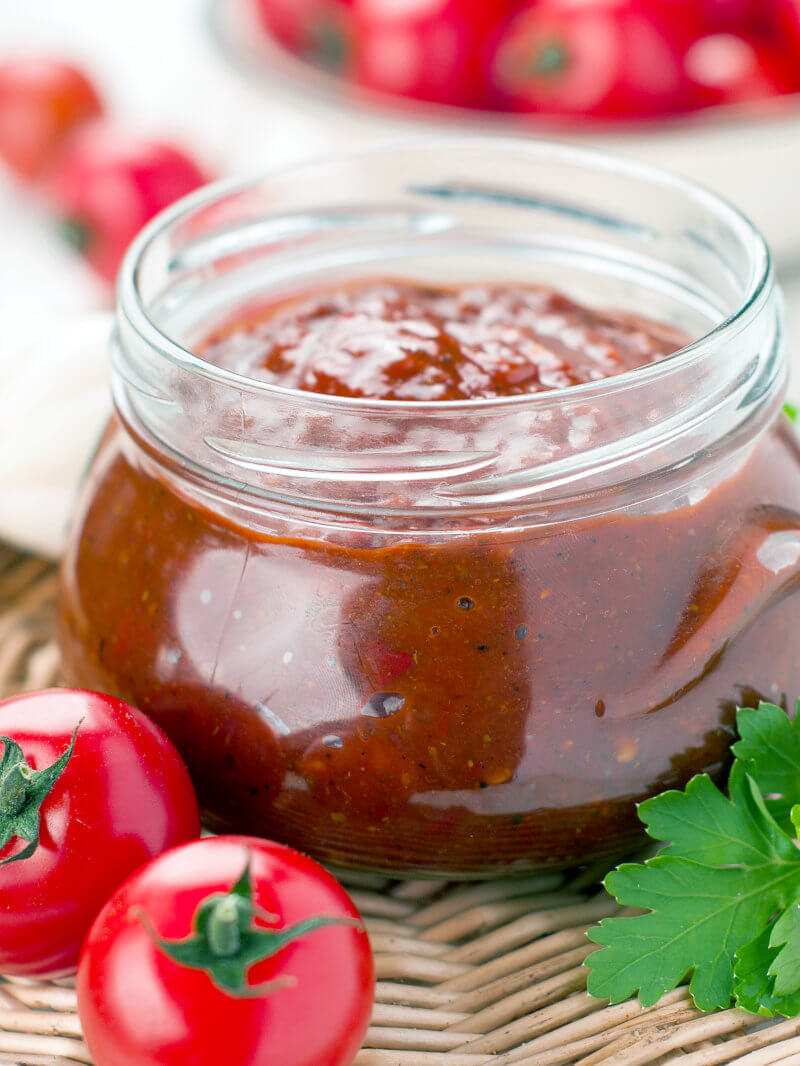 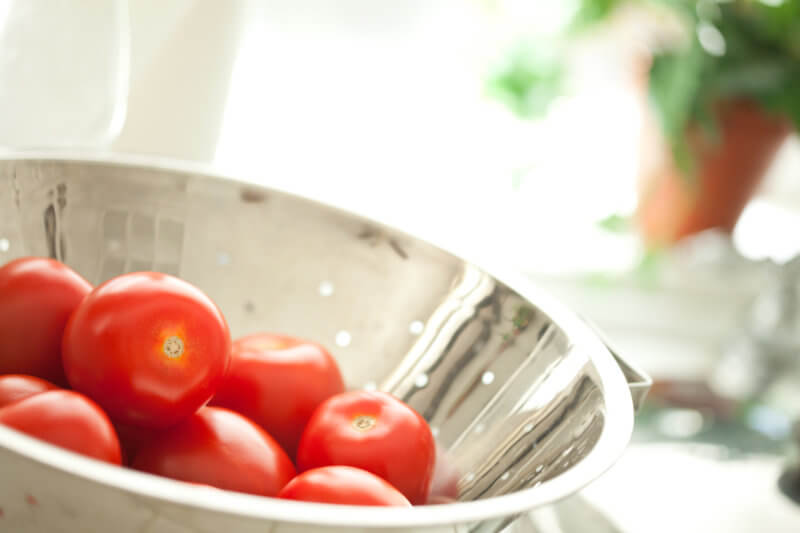 You can stuff and fry the peppers while the sauce is simmering.

Choose what cheese you’d like to stuff your peppers with. We prefer cheddar, because we always have it on hand, but monterey jack cheese works well too. 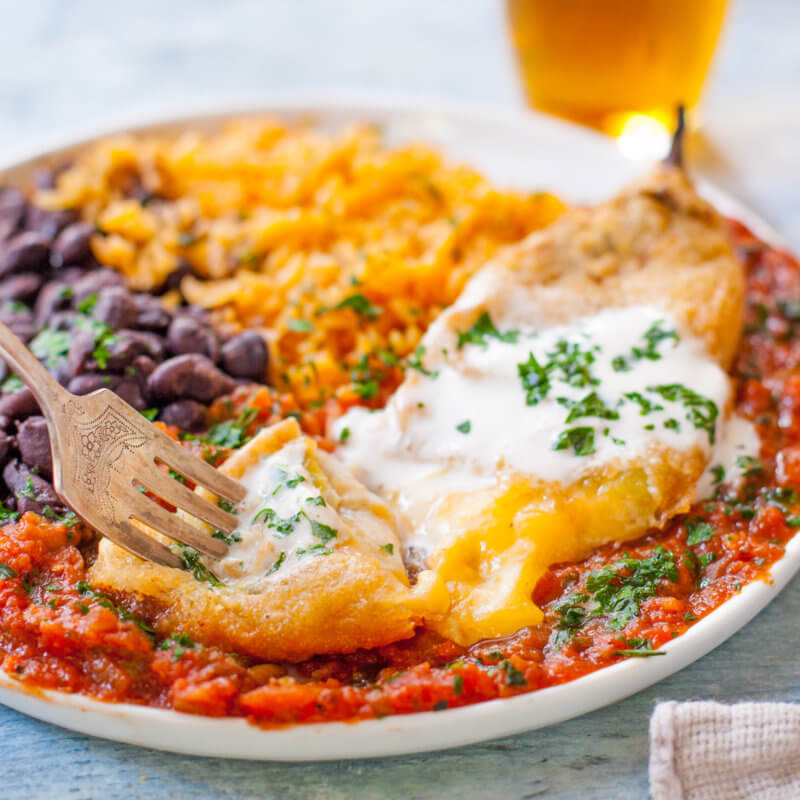 Before you start on your batter, heat 2 cups of canola oil (I have also used avocado oil) in an electric skillet or deep fryer to 265 degrees F. I have also done this in a pot on the stove with a candy thermometer, you just need to monitor closely so the temperature stays at 265 F.

The chile relleno batter is simply made from eggs. The key is to beat the egg whites separate from the egg yolks so you get a stiff egg batter that is almost like a frosting. 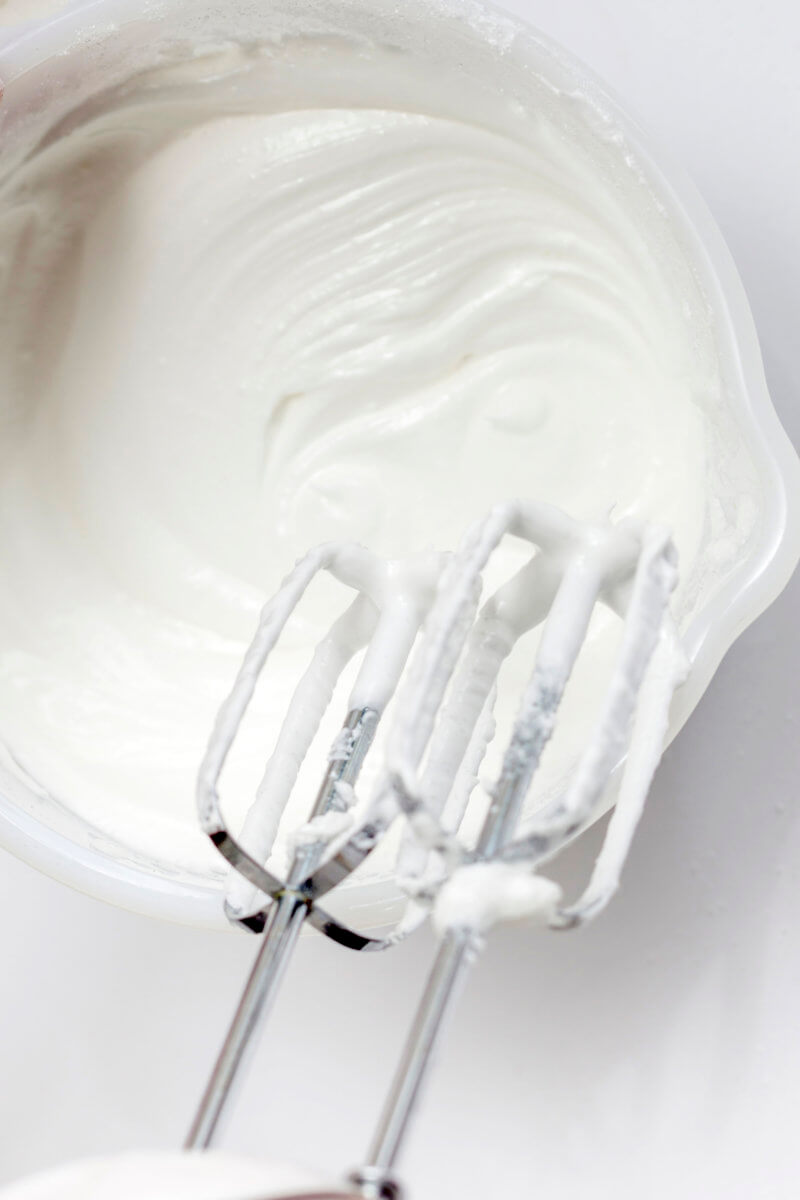 HOW TO SERVE CHILE RELLENO 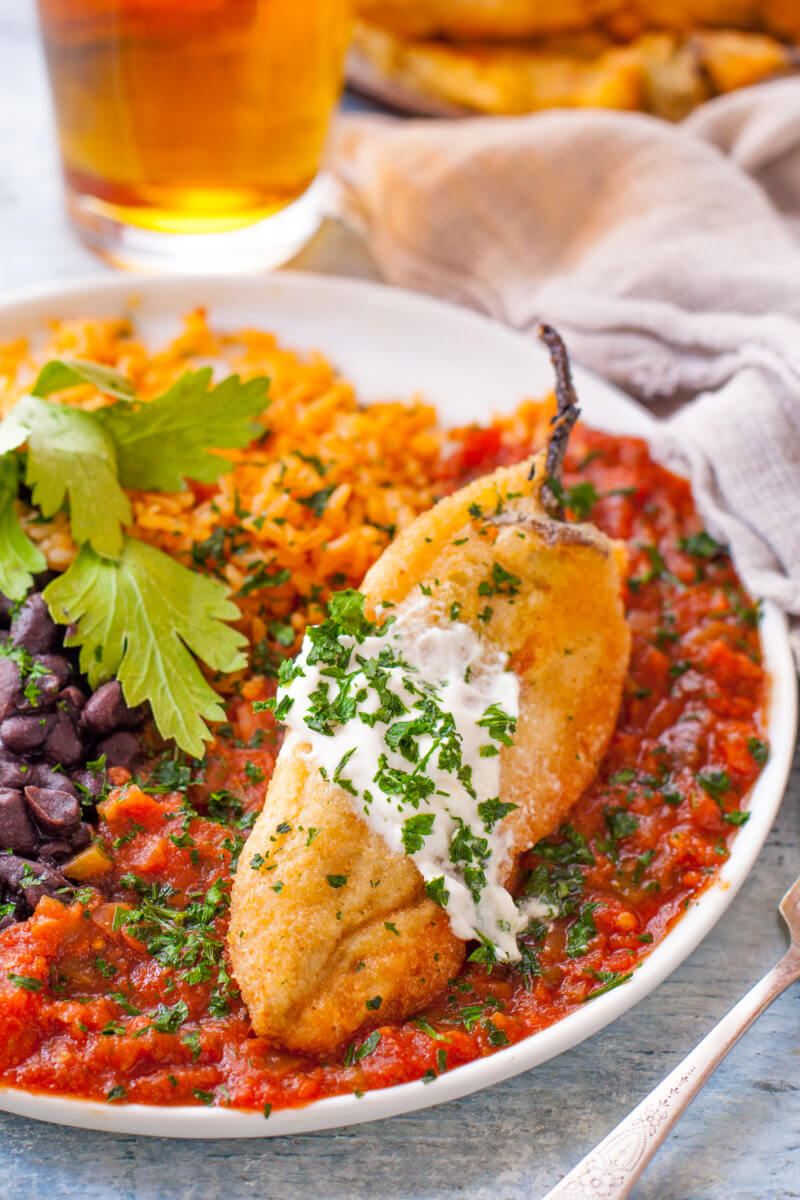 Place a big pool of your tomato chile sauce on the plate, and place a chile relleno in the center of it.

Top with a dollop of sour cream and a sprinkling of chopped cilantro.

We like to serve ours with rice and beans. You could also serve with cauliflower rice to cut back the carbs. 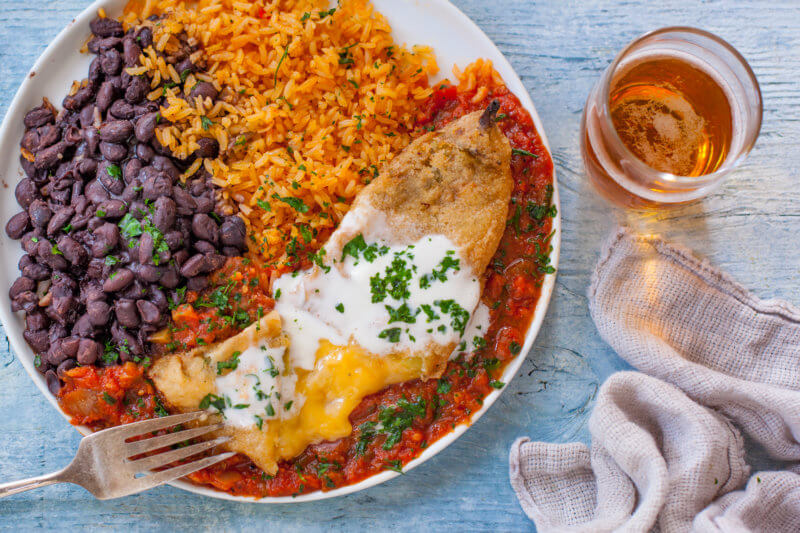 Make sure to pin this chile relleno recipe for later! And if you make it, we’d love to see a photo. Just leave it in the comments of the pin on Pinterest. 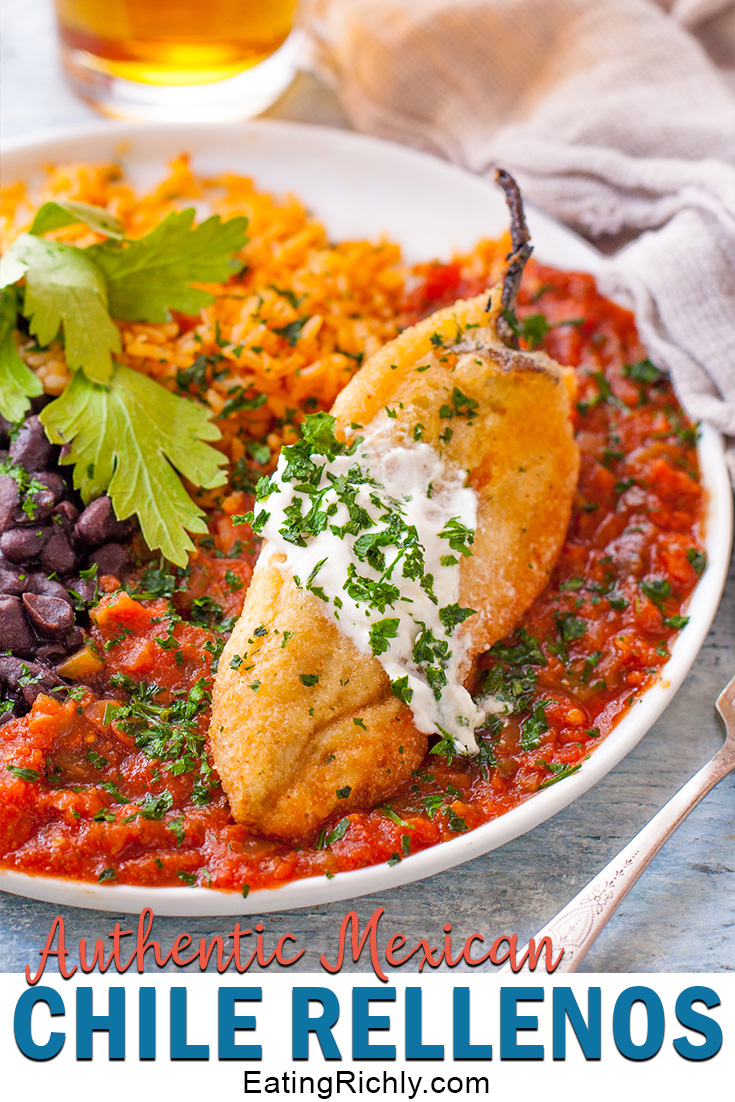 TO MAKE THE SAUCE