Life can be a roller coaster of emotions. Even when your life is good, circumstances can come along, maybe a crummy day at work, or bad news from a friend, (or both!) and you suddenly feel depressed. Not depths of despair or anything, just down in the dumps. That’s when cooking adventures can be therapeutic (when successful) or dangerous (when unsuccessful).

Fortunately, this adventure was successful, and I was left with a great sense of accomplishment. It’s a pretty simple recipe I found on the Food Network (from the show Melting Pot which I’ve never actually seen). For me the hard part was that I didn’t know how to flatten shrimp. I decided to go with butterflying it, and found some explanations by googling it. 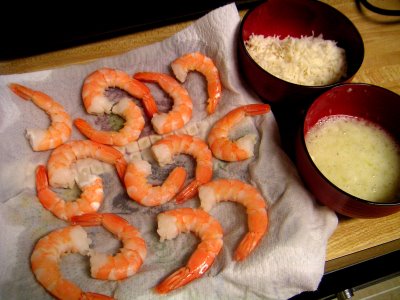 The dish is coconut shrimp with lime dressing, and it was yummy. I had some trouble with the frying because the recipe called for the oil to be 350 degrees, but that burned my first two shrimp, so I turned my burner down and it worked a lot better. I also did them one at a time because I wasn’t sure what I was doing. If you try this, buterfly them all at once and then dip several at a time to fry together. 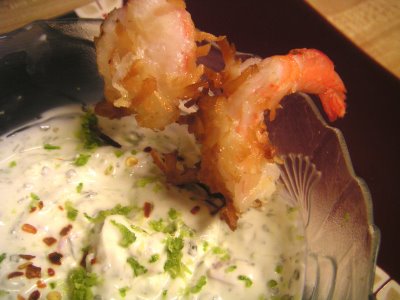 Combine dressing ingredients and chill until ready to serve.

In a large heavy bottom pan, pour enough oil to fill the pan about a third of the way. Heat over medium heat until a deep-fryer thermometer inserted in the oil reaches 350 degrees F. (If you do not have a thermometer a cube of bread will brown in about 3 minutes.)

Fry the shrimp in batches until coconut is golden, about 2 to 3 minutes. Drain on paper towel. Serve immediately.

Not sure what to serve with the shrimp, I sliced up some cheddar and made a cheese and grape cabin! Silly I know, but it was fun and made me feel creative. It was also fun having all finger food for dinner. All in all, Eric and I decided this was a big success.