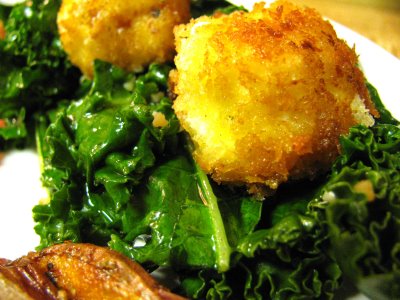 Happy Valentine’s Day! Or as Eric and I sometimes call it, “Single’s Awareness Day”. See, Eric and I both made decisions around the same time (late teens for him, early twenties for me since I’m older!) not to date anyone unless we were ready for marriage and thought they could be the one we were supposed to marry. We didn’t know each other at that time, but both of us were really secure in trusting that God would provide that person when we and they were ready. And He did! So Valentine’s Day wasn’t too hard on us as singles. But so many of our single friends felt so alone and miserable on Valentine’s Day. So many of our married friends felt that was their one day a year for romance. We didn’t feel like either of those situations were healthy neither of us really sees Valentine’s Day as important. But we are having a mini marriage retreat this weekend because we’re house sitting for Eric’s parents. So I’m fixing us a special dinner and dessert, which means I can’t say we’re NOT celebrating Valentine’s Day. 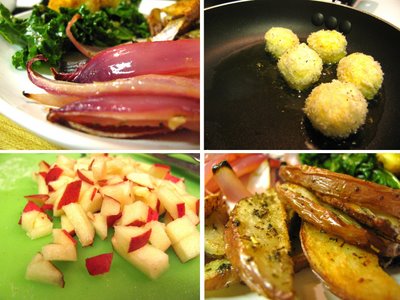 My latest cooking adventure has been cooking with Kale. It’s the next ingredient in the Superfood Challenge, and we were supposed to use it as a main ingredient for dinner. So I decided it’d be good for this weeks vegetarian meal. Unfortunately, it was not so successful for Eric. He loved the oven fries, crispy goat cheese and pear crumble. But he was not a fan of the sauteed garlic kale that I served the goat cheese over, or Ina Garten’s Herb Roasted Onions. I actually really liked the onions, but he didn’t like having just onion without other veggies or meat. 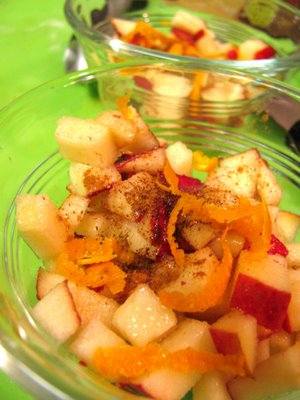 The crispy goat cheese balls are really easy. Simply roll the cheese into a ball, then coat in some egg and then some Panko mixed with a little salt and pepper. Heat some olive oil in a frying pan and cook the cheese rotating throughout for about 3 minutes. The pear crumble was also very easy, I don’t have a recipe because I just threw things together. First chop the pear small then mix in single serving oven safe dishes with some orange zest, lemon juice, sugar, cinnamon, cloves, and nutmeg. 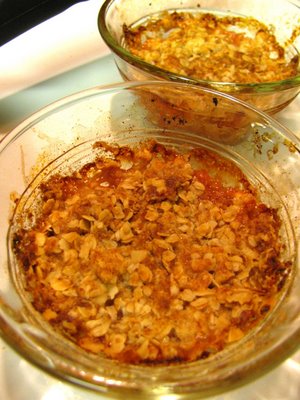 Mix some oats with flour, brown sugar and cold butter until it’s nice and crumbly. Spread over the pear and put in the oven about 20 minutes. Nice simple dessert that just took one pear! Now, I wasn’t going to give up on Kale, so I decided to try “disguising” it. Thus my Kale Feta Burger was born, and it was more successful, hooray! 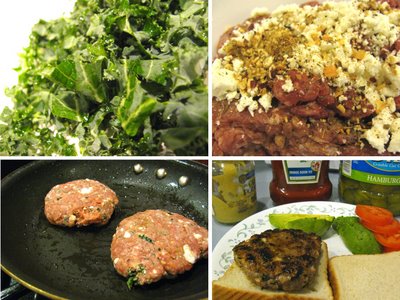 First I chopped the kale small and coated it in olive oil and garlic powder. Then I roasted it at 400 degrees for about 5 minutes. In the ground beef I mixed about 1/2 cup of Feta, some minced garlic and onion (the dehydrated kind) and salt and pepper. Then I mixed the roasted Kale in. My one mistake was that I portioned out the amount of meat with thinking about all that I’d be adding. So I had patties that were too fat. They were still delicious but we like thin burgers. Once it was all mixed I formed it into two patties and fried them in a pan. 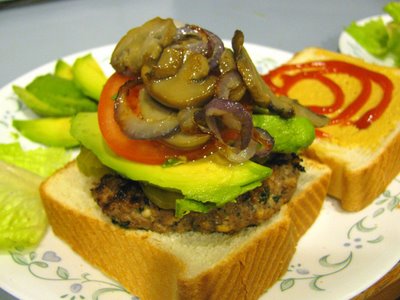 Eric’s parents didn’t have hamburger buns, but they had Texas Toast, so we went with that. I topped it with lettuce, dill pickle chips, fresh avocado and tomatoes, and sauteed onions and mushrooms. Yummy! It was really good and Eric could not belive that he’d just eaten half a cup of Kale 🙂 I’m so sneaky. While I made the burgers, Eric made a broccoli salad as I gave him basic instructions off the top of my head. It turned out really good and I’m so thankful to have a husband who can follow recipes/instructions in the kitchen. By the way we only like this salad fresh so just make as much as you need. Have a great evening and be on the lookout for my fancy dinner I’m making tonight, coming soon! 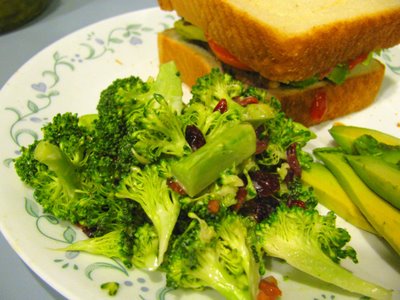 0 thoughts on “Cooking with Kale”