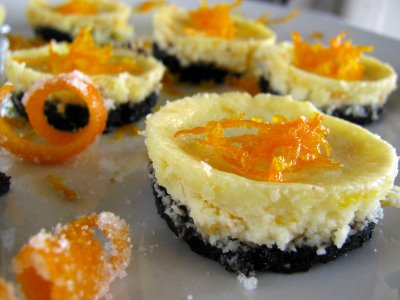 The April 2009 challenge is hosted by Jenny from Jenny Bakes. She has chosen Abbey’s Infamous Cheesecake as the challenge.

Yipes! Is it really the end of April? How did that happen? I realized it was getting late in the month and last night checked the Daring Baker forum to see when our challenge was due. It’s today! This is the latest I’ve ever made the challenge, but fortunately it’s a relatively simple one. You can find the original recipe here. Because I was in a hurry, and because Eric doesn’t really like many cheesecakes, I decided to make about 1/3 of the recipe and use cupcake and mini cupcake pans instead of a pie pan. 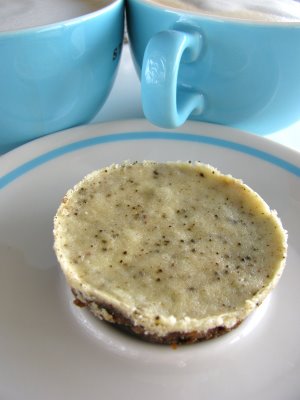 My sister Sharon loves to make mini chocolate and orange cheesecakes whenever she has a party, and Eric said that’s the one cheesecake he likes, so I decided to do something along those lines using crushed up Oreos for the crust and orange juice and zest in the filling. Also, just for fun, I took out a little bit of the filling before adding orange to it and added a pinch of espresso and a sprinkling of ginger powder and nutmeg, then used crushed up gingersnaps for the crust. My recipe below is just for the chocolate and orange. If you want to try the gingerbread latte version use 8 Oreos in your crust recipe and 2 TBS butter. 5 crushed gingersnap cookies and 1 TBS butter made 3 large cupcake sized cheesecake crusts. Confused yet?

For the water bath I would suggest pulling your oven rack out and placing the pans on it before filling with water. I had a hard time with sloshing boiling water around, it was a little scary and fortunately I didn’t get burned, but one of my mini cheesecakes got a little bath! These were pretty simple to make and I love that they’re little individual bites since I don’t eat a lot of dessert. I would definitely make these again and I also think that the cheesecake recipe is a great base to play around with. 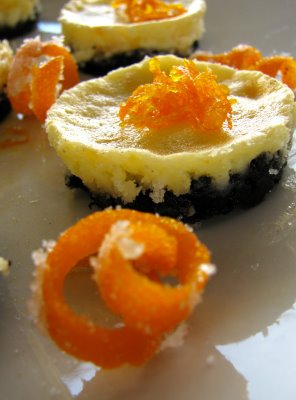 Preheat oven to 350 degrees. Begin to boil water in a kettle for the water bath.

Use a food processor to turn the Oreos into fine crumbs. Mix with butter and press into bottom of cupcake pans. Set crust aside.

Combine cream cheese and sugar in the bowl of a stand-mixer and cream together until smooth. Add egg and make sure to scrape down the bowl. Add heavy cream, orange juice, and zest and blend until smooth and creamy. Spoon batter into prepared crusts and tap the pan on the counter a few times to bring all air bubbles to the surface. Place pan into a larger pan and pour boiling water into the larger pan until halfway up the side of the pan.

Bake 20 minutes, until it is almost done – this can be hard to judge, but you’re looking for the cake to hold together, but still have a lot of jiggle to it in the center. You don’t want it to be completely firm at this stage. Close the oven door, turn the heat off, and let rest in the cooling oven for 30 minutes. This lets the cake finish cooking and cool down gently enough so that it won’t crack on the top. After 30 minutes, remove cheesecake from oven and lift carefully out of water bath. Cover and put in the fridge to chill. Once fully chilled, it is ready to serve. Use a knife to separate the cheesecake edges from the pan. Garnish with sugared orange zest and spirals.