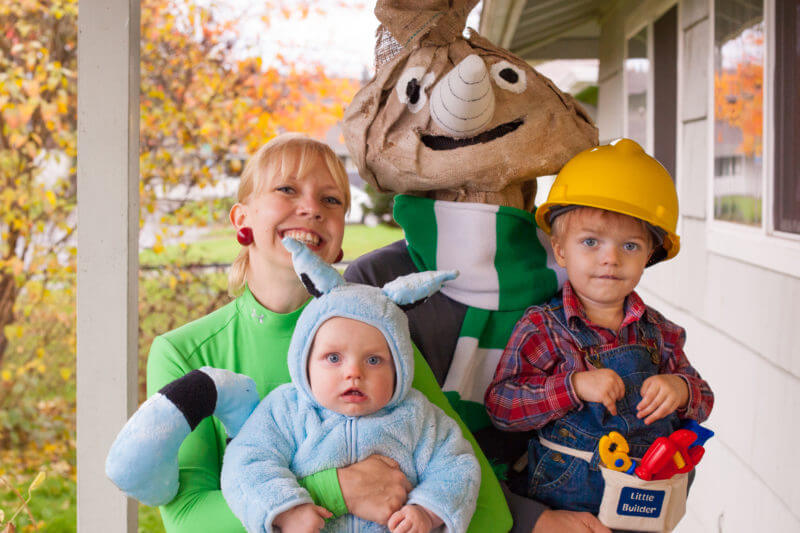 Check out how you can make a DIY Bob the Builder costume for the whole family! Bob, Pilchard, Wendy, and Spud DIY costumes for toddlers, babies, and parents.

DIY BOB THE BUILDER HALLOWEEN COSTUME FOR THE WHOLE FAMILY

For his sister Larkin, just 9 months old, we knew Pilchard would be the perfect costume because she would be bundled up nice and warm, and still be able to crawl around.

Since I’m already blonde, it made sense for me to be Wendy, which just left a costume decision for Eric. 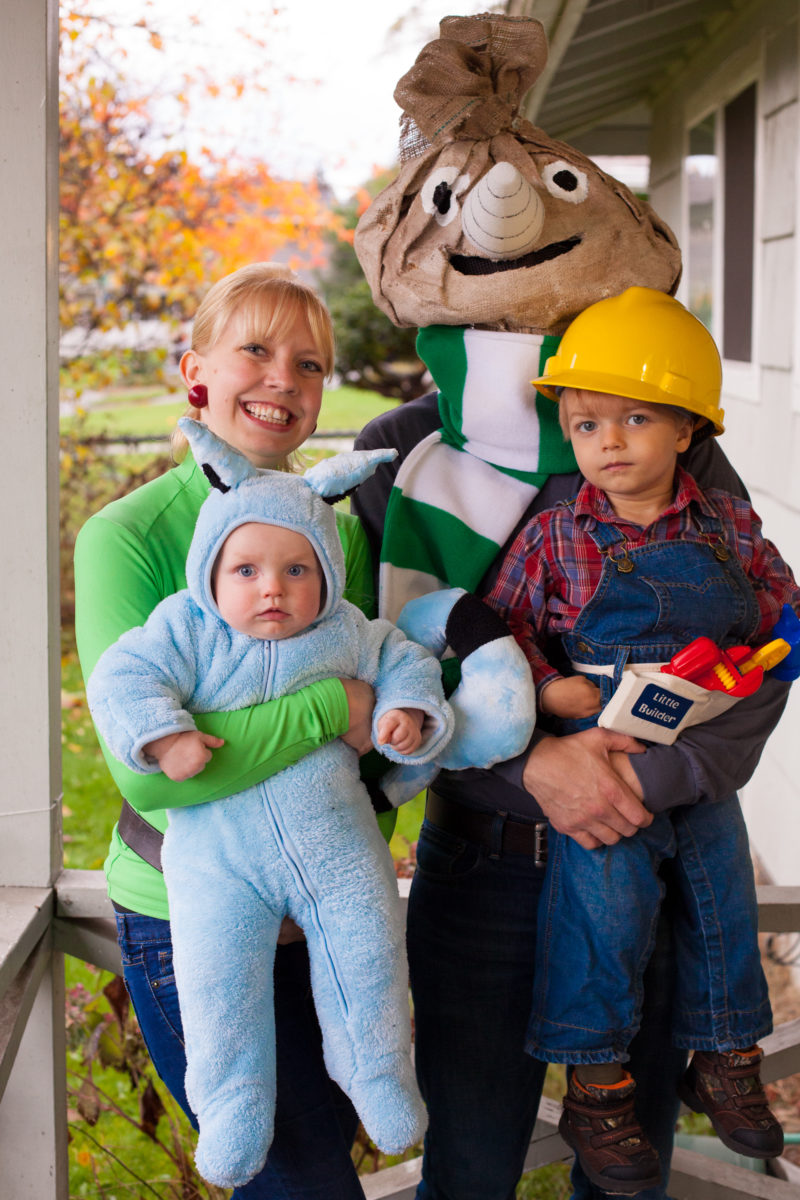 We considered using painted boxes to turn him into Scoop or Muck, but I wanted him to be able to easily carry Larkin, so we decided to go with Spud the Scarecrow.

For the all the costume clothing, we either used clothes we already had, or purchased clothing items we knew we’d use again for everyday wear. 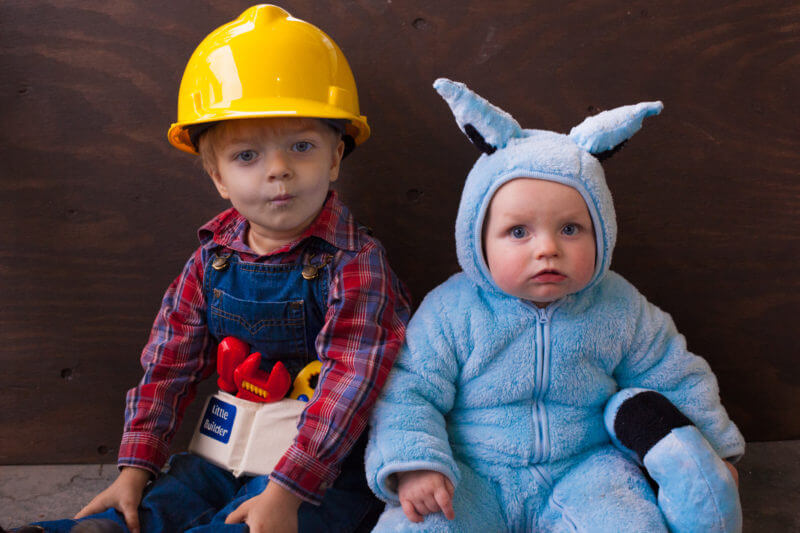 The easiest Bob the Builder DIY costume was definitely Bob. We already had a hiking boots, a plaid shirt, and borrowed some overalls (which I later found on sale for $5 at Old Navy!). So we just needed the hat and tool kit. The overalls and plaid shirt are a must, but you could just have your kiddo wear tennis shoes if you don’t have boots.

The construction hat is actually a real construction hat, but you can cinch the inside straps tight enough to fit a toddler. This is great because it will fit them for dress up play FOREVER! It was just $8 when we ordered it.

The tool belt was $15, and he still plays with it regularly a year later. 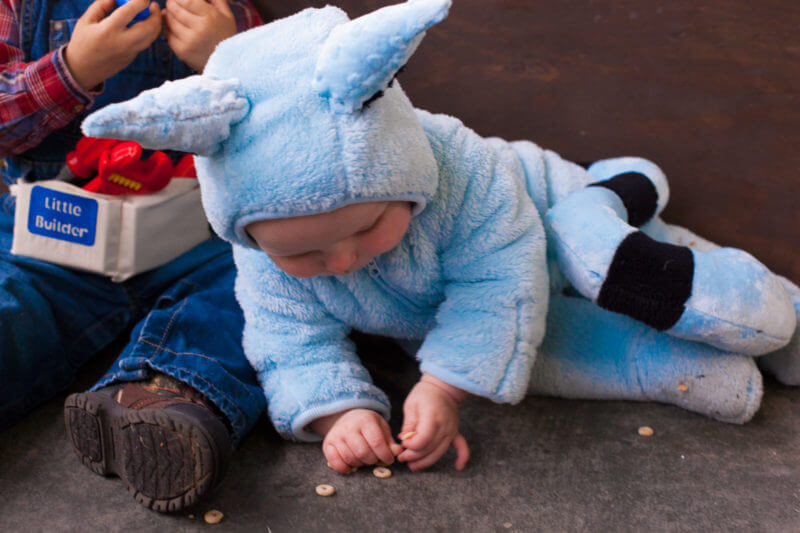 The Pilchard DIY Bob the Builder Halloween costume for baby Larkin was a little more work. I didn’t want to have to make the whole outfit from scratch, so I started by scouring the internet and secondhand shops for a fuzzy hooded blue onesie or baby bunting. I ended up finding this one, which was Children’s Place brand, on eBay for around $15, same price I’d pay for a used winter bunting locally.

The next step was finding fabric to add on pointy ears, stripes, and a tail. 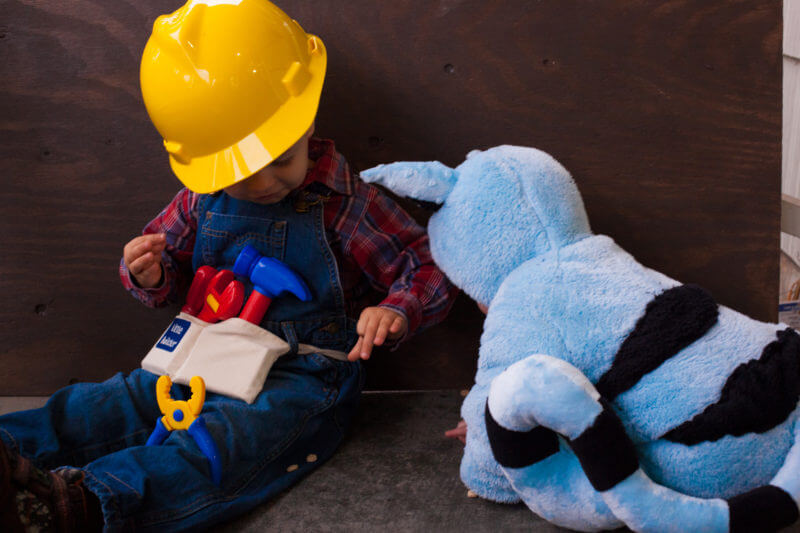 I couldn’t find the same fabric as the suit, but did find this Soft N Comfy Dot fabric at Joann Fabrics in light blue. The color was a perfect match. For the tail, I actually ironed and stretched it quite a bit with stuffing to get the dots out. For the ears, I decided not to worry about it. The black fabric I used was a black minky. 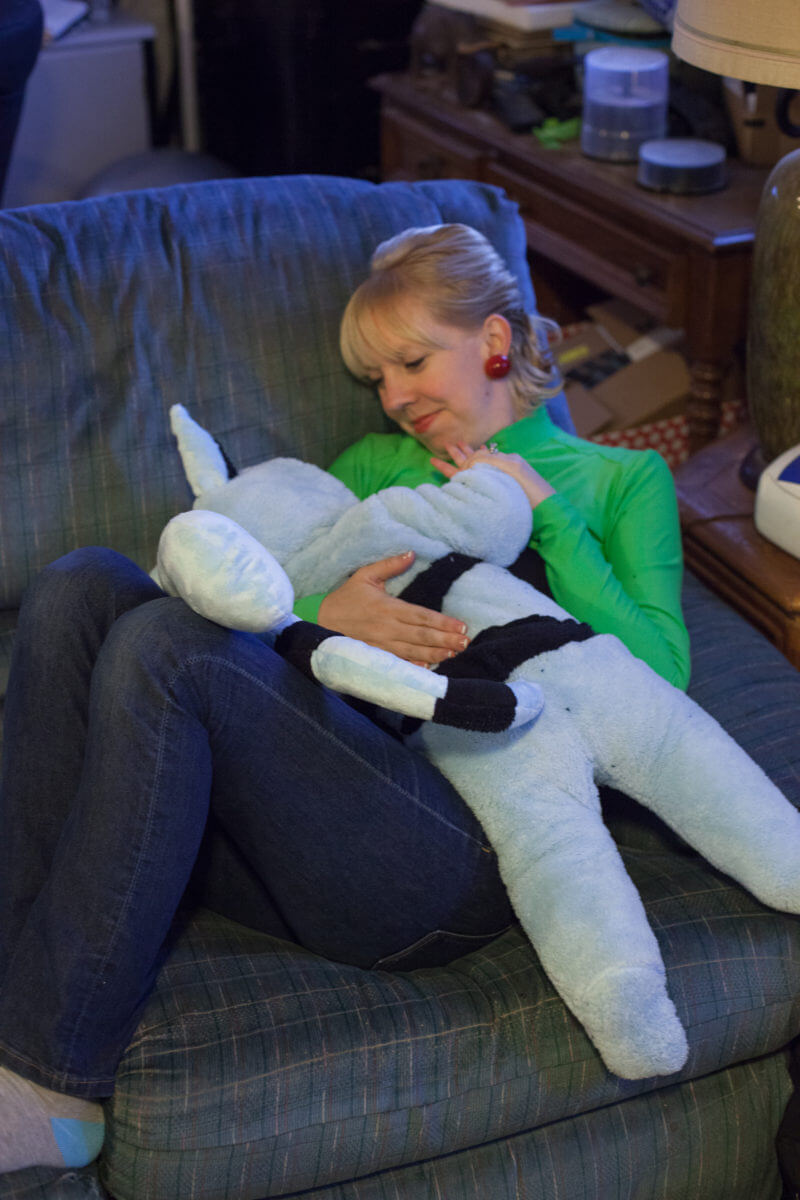 (By the way, toss a black tank top under your Wendy shirt, and you have a breastfeeding friendly costume!)

To make Pilchard’s tail, I drew the shape I wanted on a long sheet of parchment paper. Then I added the lines for where stripes would be and labeled the pieces Blue 1, Black 1, etc. I cut out all the pieces, traced them onto the blue and black fabric, cut those out, and did the same in reverse. So each blue stripe is two pieces of fabric, and each black stripe is two pieces of fabric. I sewed the stripes together for the two sides of the tail, then sewed the two sides together inside out, leaving a few holes for poking stuffing into. I turned the tail right side out and was ready to stuff it with Poly fil. 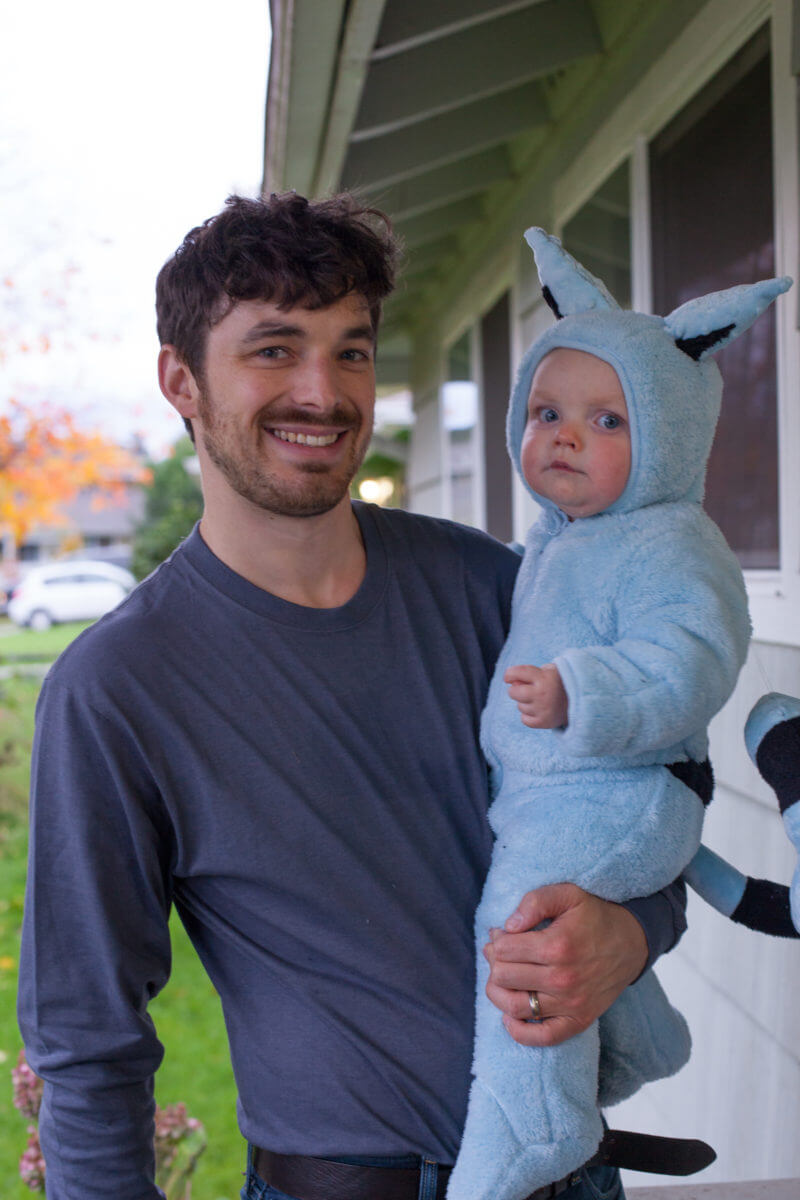 I sewed the ears, tail, and stripes onto the bunting with large stitches, so they could be easily removed later if we wanted to. I also used some invisible thread to attach the tip of the tail to the back of the costume so that it would be suspended in midair. 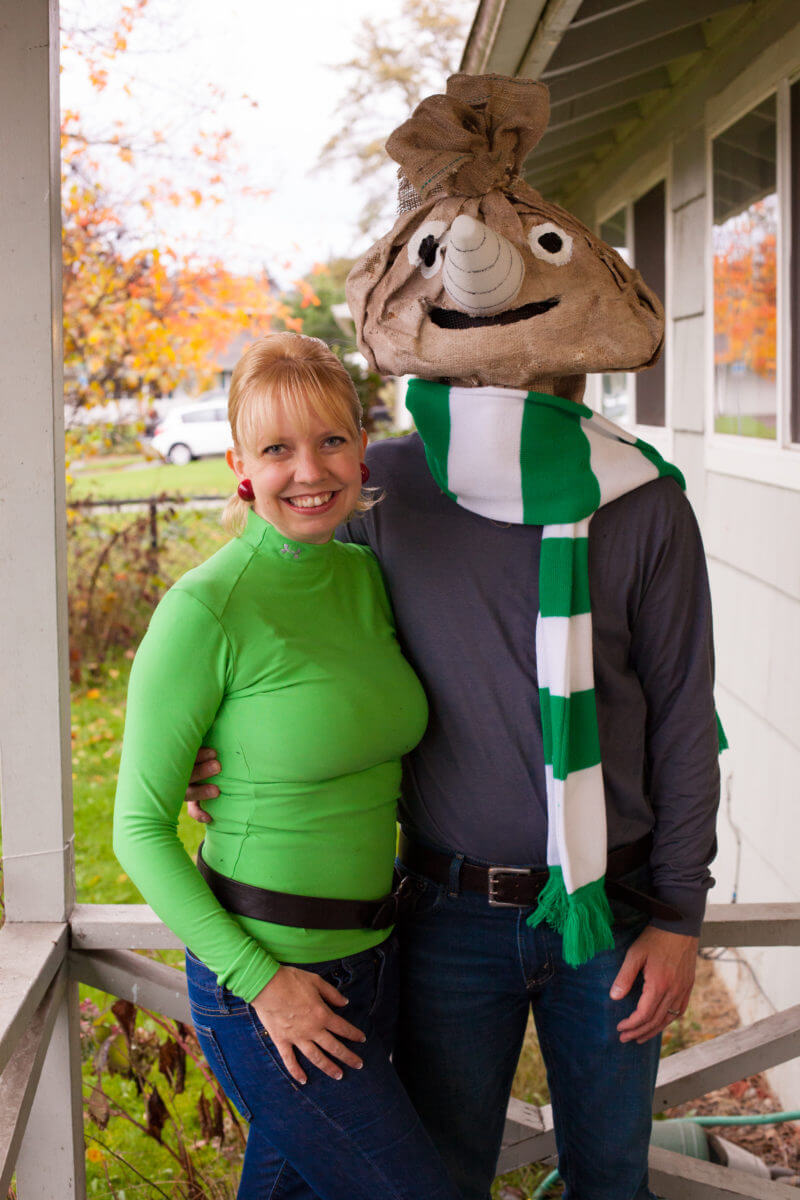 The Wendy costume for me was really easy. I just needed to find a lime green shirt and her signature red button earrings. Here are the earrings I got, though mine were clip on since my ears aren’t pierced.

The shirt I got off of ebay was an Under Armour compression top because I knew I’d use it for running and snowshoeing. But any long sleeved lime green shirt will do. The finally touches were pulling the hair back, and adding one of my husbands belts. 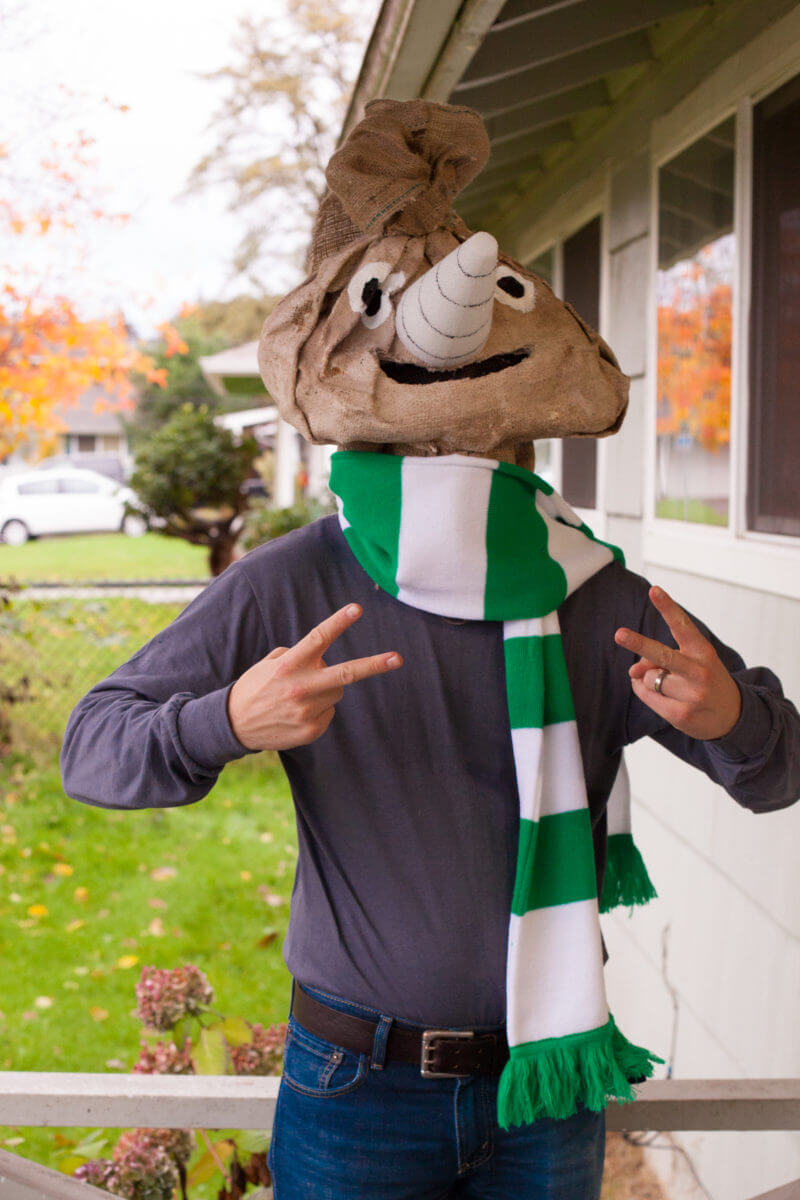 My husband’s Spud costume was definitely the one that took the most time and effort to make. That was mostly because of drying time for the layers of paper/burlap mâche.

I used a 20″ beach ball blown up as my mold for Spud’s head. Then I started making layers of paper mache using Sta-Flo liquid starch and flour. I foolishly tried speed drying the layers with a heat gun, which ended up popping the beach ball and deflating/shrinking the head! SO, you should plan at least a week to make the spud head so you can dry each layer one at a time, OR do my cobbled together quick fix of bunching up foil that you can later pull out to have the head still be hollow.

Once I had a good head shape, I used a sheet of burlap from the bottom to top, pulling and gathering the edges together and holding them in place with a sturdy rubber band (from a bunch of asparagus!). I used the Stay-Flo mix on the burlap as well so it would stay nice and stiff, except where it was held together at the top.

Once the head was dry, I used a box cutter to cut out a hole on the bottom for Eric’s head to fit through. Then I had him put it on and touch on the outside where his eyes were. I marked those with a sharpie, and then cut out a smile that would be right over his eyes. I got a single sheet of needlework black canvas from a craft store (it’s like a plastic screen so you can see through it) and hot glued it inside the mouth so he could see out but not be visible.

For Spud’s nose, I drew lines with a sharpie on a white foam cone, then hot glued it to the head. The eyes were painted on with acrylic paint which is super cheap at Walmart.

I decided to go with a grey shirt instead of lavender because I found one pretty cheap, and used a green and white scarf since I couldn’t find a cheap green and red one. The final costume pieces were jeans and a belt.

If you look closely, you can see that there is a loose piece of canvas that I glued inside the head hanging down to cover Eric’s mouth and chin, and his scarf is covering it. This is really because my ball popped and the head shrunk, but it worked because it made him seem taller and more scarecrow like. 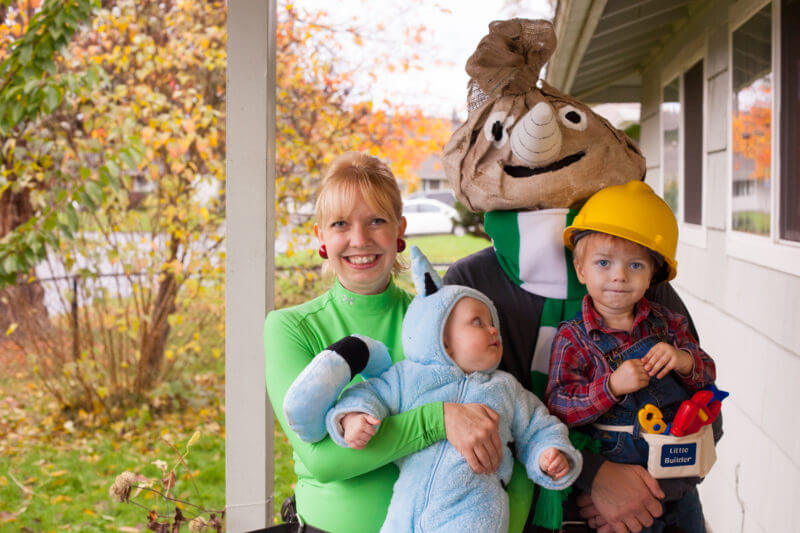 If your family dresses up as Bob and his friends this year, we would love to see it! Feel free to leave a comment in the post linking to photos, or tag us on Instagram with @EatingRichly.