Prunes have gotten a bit of a bad rap.  They tend to be associated with old people and remedies for intestinal problems.  But really they’re quite delicious and deserve some respect.  Maybe that’s why they’re being called “dried plums” now.  The first time I heard that I was like, “Wait, isn’t that a prune?”.  Personally, I’ve always liked prunes.  My poor brother had lots of health issues, so had to eat some everyday as a child.  I loved it because there was always a bag of prunes in the cupboard for me to snack on.

I’d pull a chair up to the counter, and climb on the counter in bare feet with my toes wiggling gleefully at the sense of doing something naughty.  My mother’s voice saying “If you eat more than two of these you’ll regret it!” echoed in my mind as I pulled one, then two, and finally the dangerous THIRD prune from the bag.  I’d stand there on the counter with sticky fingers and chin, making each prune last at least three bites so I could get maximum enjoyment.

The concentrated sweetness was better than any candy, and the idea that it could potentially upset my stomach if I ate too many was like a dare waiting to be challenged.  I still smile when I think of those prune loving days, which is why I was excited when California Dried Plums was asking for recipes. 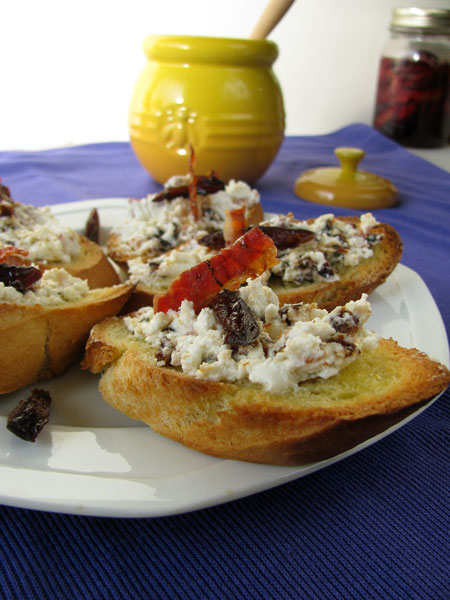 This simple appetizer takes less than 10 minutes to prepare but is a medley of incredible flavors.   As you bite into the baguette, the crunch of toasted bread sings of its crispy texture.  Then goat cheese drizzled with honey coats your tongue with creamy goodness.  The sweetness of the dried plums and salty savory bacon balance each other out, and every bite brings waves of pleasure to each and every taste bud.

Yeah, it’s that good.  Eric couldn’t stop talking about these simple little snacks, and I’m already planning to buy more dried plums so I can make them again.  Serve these as appetizers at your next party, and then after everyone asks what’s in those amazing bread things, watch and smile as you tell them it’s prunes.

Preheat oven to 350 degrees.  Cut baguette into thin 20 thin slices.  Brush one side of each slice with olive oil and place on a cookie sheet, oil side up.  Place in oven for 5-8 minutes until crisp and just starting to brown.

Meanwhile, mix chopped dried plums, crumbled bacon, and goat cheese in a bowl.  When the bread is done, spread a little goat cheese mixture on each slice.

Drizzle honey over the top of the cheese mixture.  Optional:Garnish with slices of dried plum and bacon

Approximate cost/serving: I bought the dried plums from a bulk bin, so they were really affordable.  The whole appetizer cost me $6 to make.  That comes out to only 30 cents each!  A very affordable appetizer.