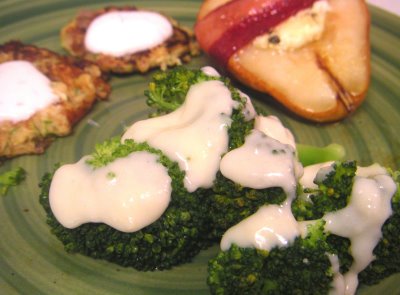 Eric is one of the typical men who feel that dinner just isn’t right without meat. I can understand, that’s how we were brought up, there’s always some kind of meat for dinner, even if it’s just a little bit. That’s how I typically cook for him too. Even if it’s a salad there’s a little bit of bacon or chicken or turkey lunchmeat on it. But one of my nutritional goals is to start having at least one vegetarian dinner per week.

I’m starting small, mostly vegetarian meals but a tiny bit of meat. This was the meal I used to tell him my plan. He really liked it! We had steamed broccoli with Gruyere white sauce, a pear stuffed with herbed goat cheese, wrapped in a slice of turkey bacon, drizzled with honey and baked until tender, and zucchini pancakes (I called them fritters but Eric said they’re definitely pancakes). I want to make them again and get better pictures, then I’ll post the awesome recipe. 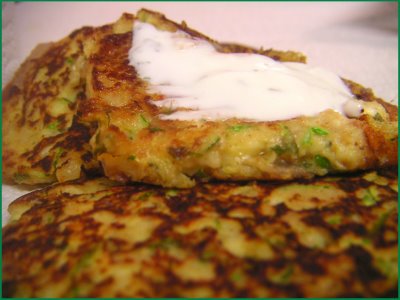 The funny thing was, I included the bacon to have some sort of meat in it, but he actually preferred the pear without the bacon! I still want to try it with prosciutto (the current ingredient I’m experimenting with) but it was really amusing to me that he liked the meal better without the meat. I’m making sure we still have some kind of protein, usually cheese, but it’s a great adventure coming up with vegetarian recipes. 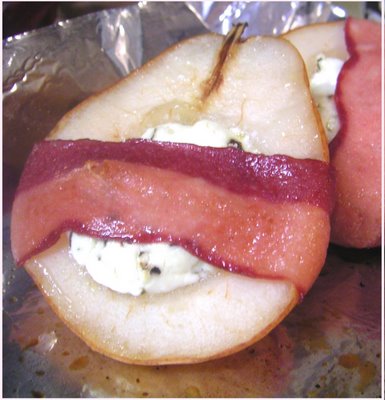 Cut the pear in half and use a spoon to scoop out the seeds creating a small bowl. Mix the goat cheese with Italian seasoning and salt and pepper to taste. Put half the mixture in each pear half. Wrap with the slice of bacon and secure with a toothpick.

Melt the butter in a sauce pan. Whisk in the flour until lumps are gone. Add milk and cheese. Stir until cheese is melted, add salt and pepper to taste. Serve over steamed veggies.