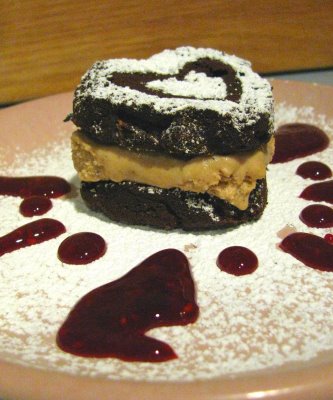 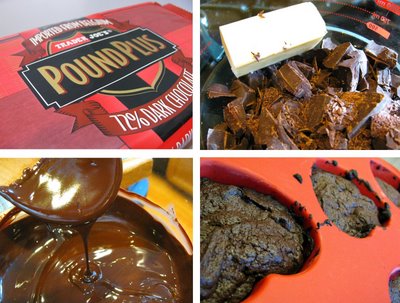 Okay, that’s the required text that the DB team uses to see if we completed the challenge. Our challenge was to make a Chocolate Valentino cake (Valentino cakes are traditionally heart shaped) which is a flourless cake. Then we were supposed to pair it with homemade ice cream, yum! Instead of doing vanilla, I made our absolute favorite ice cream recipe by Jaden of Steamy Kitchen. It’s Thai Coffee Ice Cream and I can’t share the exact recipe until her cookbook is out, but it has espresso and cardamom and sweetened condensed milk and is incredibly amazing! I also paired it with a raspberry sauce. 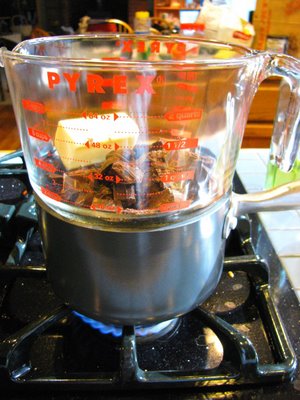 I had a huge blessing when making this challenge that we were staying at Eric’s parents. They have a REALLY nice kitchen and his mother has tons of cooking equipment. It was like Christmas! There was a big gas stove, two ovens, a perfect glass bowl with handle so I didn’t get burned, a food mill and more. It made preparing our Valentine’s Day dinner a breeze. It’s also great for having Eric help me cook, there’s tons of prep space. 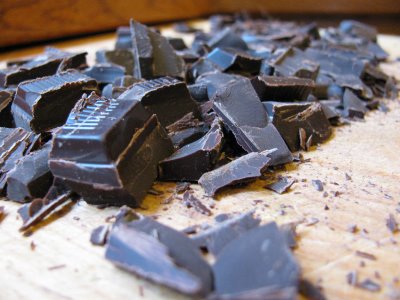 For this cake it was very important to pick a chocolate you really like the taste of, so I went with my favorite dark chocolate that I use for everything now. It’s from Trader Joe’s and the bar is over a pound and very affordable. One thing I didn’t think about is it’s not very sweet, so even though I can eat a chunk of it plain, you don’t add sugar to this so it wasn’t sweet on its own. Fortunately that was made up for by the ice cream, raspberry sauce and powdered sugar. 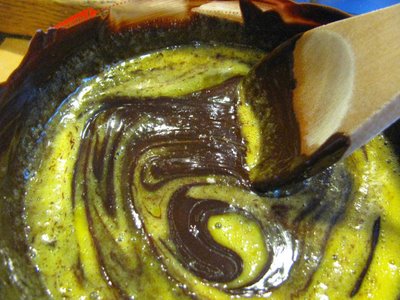 This challenge may have been my most fun so far! The recipe we had to use was only 3 simple ingredients: chocolate, butter and eggs. The creativity was in how you serve it and that was really fun for me. I knew I wanted to do the coffee ice cream, but I didn’t want it to be all brown, so I was inspired once again by my days as a Starbucks Barista (funny how much that’s influenced my cooking lately and I think there’s more to come of it) and the Raspberry Mochas that so many of my customers couldn’t live without. The powdered sugar was because I wanted to make the heart stencil on top, and to add sweetness to the rich dark chocolate. I only did a half recipe which made 8 cupcakes and what you see pictured is just one cupcake cut in half. Oh and didn’t the yolks mixing into the chocolate look so cool? 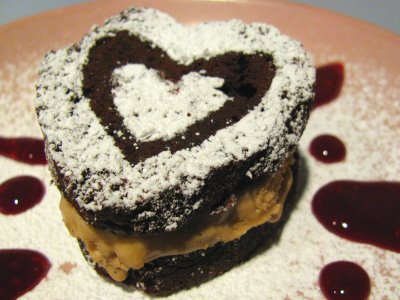 Put chocolate and butter in a heatproof bowl and set over a pan of simmering water (the bottom of the bowl should not touch the water) and melt, stirring often. While your chocolate butter mixture is cooling, butter your pan and line with a parchment circle then butter the parchment.

Add the egg yolks to the cooled chocolate. Fold in 1/3 of the egg whites into the chocolate mixture and follow with remaining 2/3rds. Fold until no white remains without deflating the batter.

Cool cake on a rack for 10 minutes then unmold. 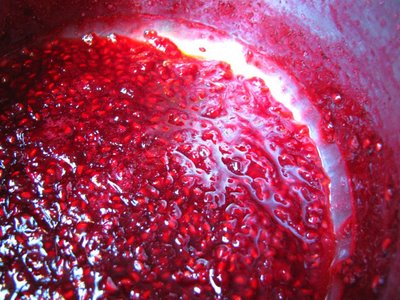 Place all ingredients in a sauce pan on medium-high. Stir and bring to a boil. Turn down the heat and simmer 5 minutes. Remove from heat and let cool.

Separate syrup from seeds (If you’re like my mother in law and have one of those handy food mills hand crank things, use it! If not press through a mesh strainer).