I managed to take a LOT more photos on day two of the Foodbuzz Food Blogger Festival, and boy what an exciting day it was! 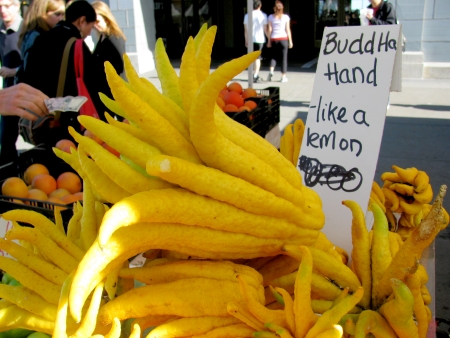 We started out at the Ferry Building again, this time for the GIGANTIC farmer’s market!  It was pretty amazing, and I saw a fruit I’d never heard of, the Buddha’s Hand which is apparently similar to a lemon.  According to wikipedia it is typically used in cooking for the zest because the pith is less bitter than a lemon. 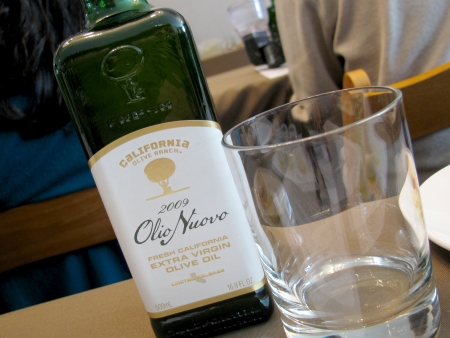 Next I headed back to my hotel where I got to participate in my first olive oil tasting.  See that bottle of Olio Nuovo?  Yep, we got to take it home! 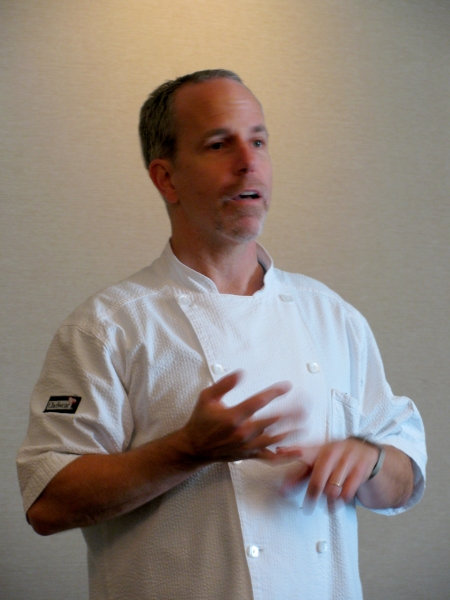 The olive oil tasting was led by Chef Michael Tuohy of Grange in Sacramento.  He had a great sense of humor and was a wealth of knowledge.  I learned about what affects the taste of olive oil, such as when the olives are picked, if they’re wet, how soon they’re  pressed and more.  I loved that he said the important thing isn’t what a professional taster might say is the best, but what taste appeals to us the most. 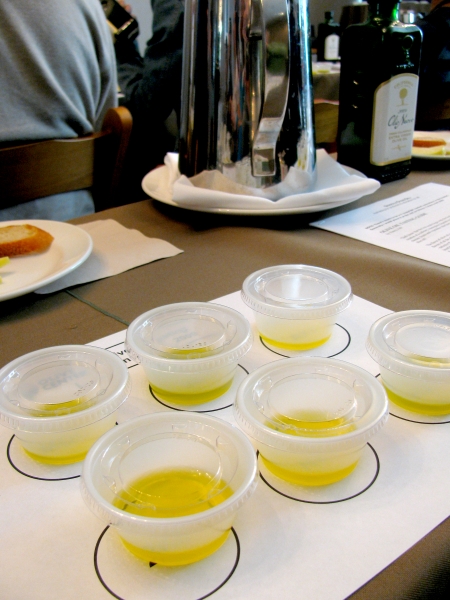 We tasted six different olive oils and it was similar to tasting wine.  We swirled the cup, uncovered and sniffed it, repeated and then slurped it.  The Chef told us we needed to slurp loudly to get lots of oxygen in with the olive oil.  I really enjoyed the tasting and learned a lot. 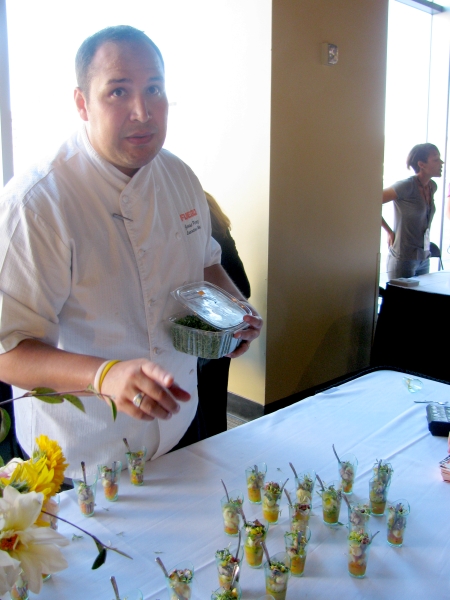 Next we headed to the tasting pavilion where there were probably 40 different tables set up with food, wine, cocktails and beer for our tasting pleasure.  I think I was one of the few people with self control at the event, I walked around to look at each booth before taking anything, so that way I could just eat the things I really wanted to try and not get stuffed.  One of those that jumped out at me was by Chef Jesse Perez of Fuego.  Want a closer look? 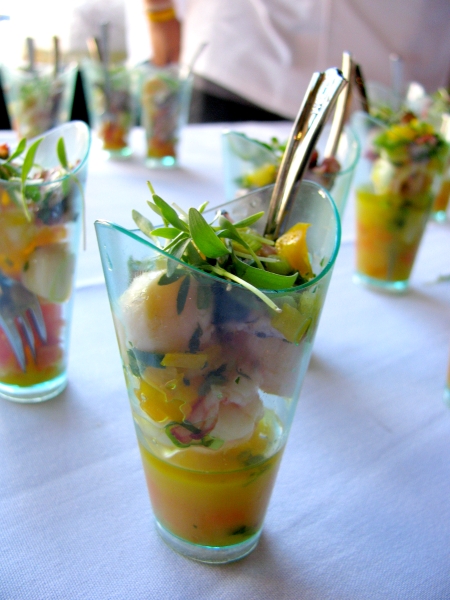 He made a shrimp, scallop and octopus ceviche that looked so beautiful I had to try it first.  It was AMAZING!  So refreshing and a great combination of flavor and texture.  I will definitely have to try Fuego if I’m ever in Long Beach. 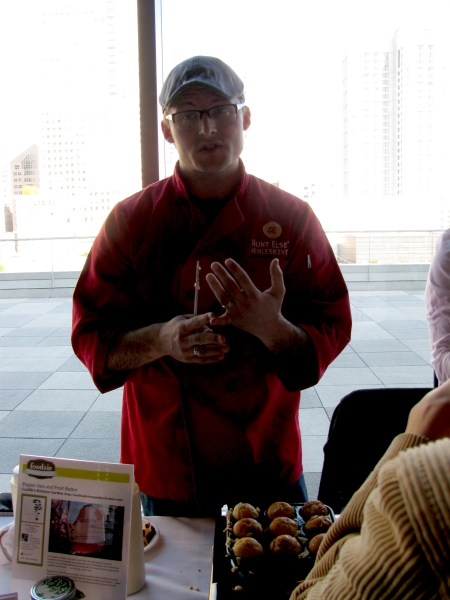 I was so excited to see Aunt Else’s Æbleskiver at a booth, not because I heard of them before, but because I bought an Æbleskiver pan two days before the festival for only $2 at Goodwill!  I couldn’t remember the name Æbleskiver and was wondering how I was going to find a recipe to make something I didn’t know the name of.  Their products are available on Foodzie which is one of my favorite online food sources.  I hope to be able to touch base with them in the future and share an Æbleskiver post with you soon. 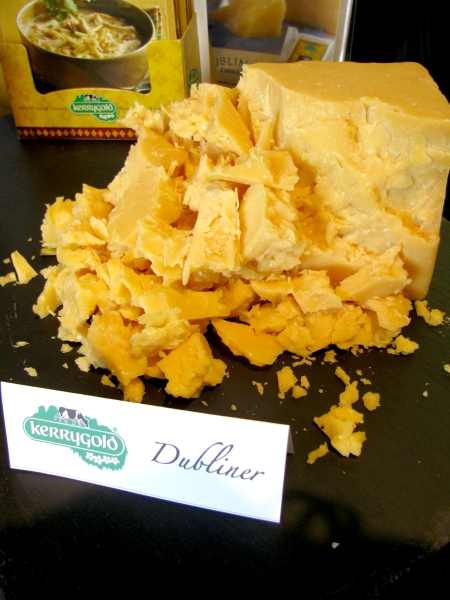 I stopped by the Kerrygold table a couple of times because I’m such a sucker for cheese.  I entered my card for a chance to win a year’s supply of cheese and butter, boy would that be awesome! 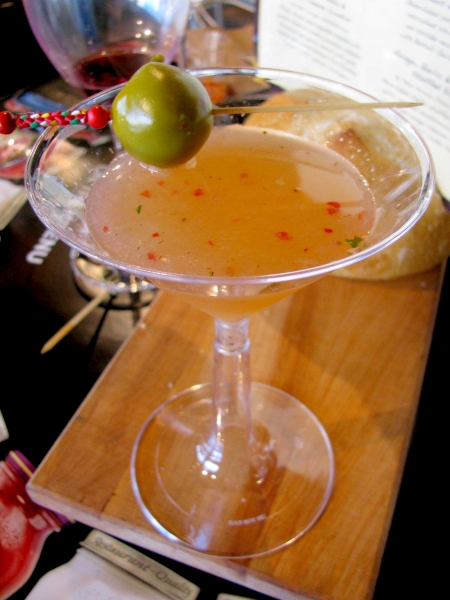 At the Mezzetta table I learned that I actually do like green olives.  They also had a cocktail with strawberry and basil and some kind of pepper I think that was a great combination of sweet, savory and spicy.  I liked it a lot, though I only had a sip or two, making sure I didn’t drink to much.  Self control people! 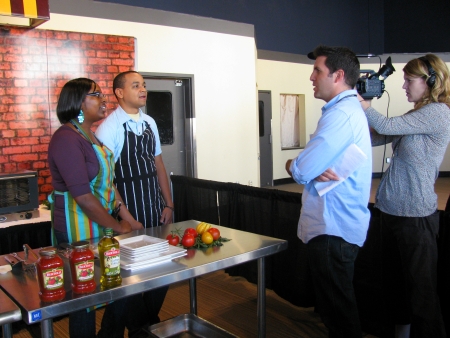 I figured out pretty quickly that the one place to sit was in the Bertolli “cafe” where three of the Bertolli winners demonstrated their dishes.  I grabbed a table with a couple other ladies and we took turns watching each others’ belongings as we went to grab more food.  It was so nice to sit after most events were all on our feet.  The DuoDishes were the first up in the kitchen. 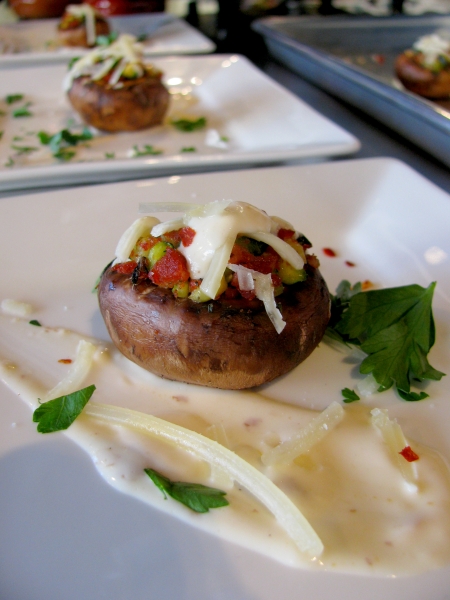 Their dish was a fabulous sausage stuffed mushroom, it was a tasty bite and I’m so glad they demonstrated it. 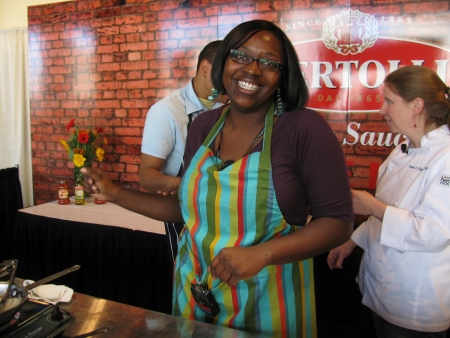 They did a fabulous job and seemed so comfortable and confident.  Chrystal was so beautiful and both she and Amir were some of the nicest people I met.  I really look forward to keeping in contact with them. 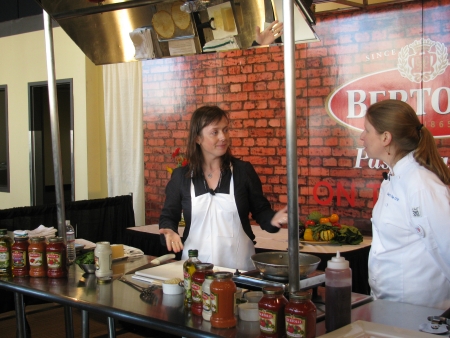 Next up was Mardi of EatLiveTravelWrite and everyone loved her accent as she pronounced things like basil and oregano.  She was so sweet and did a great job as well. 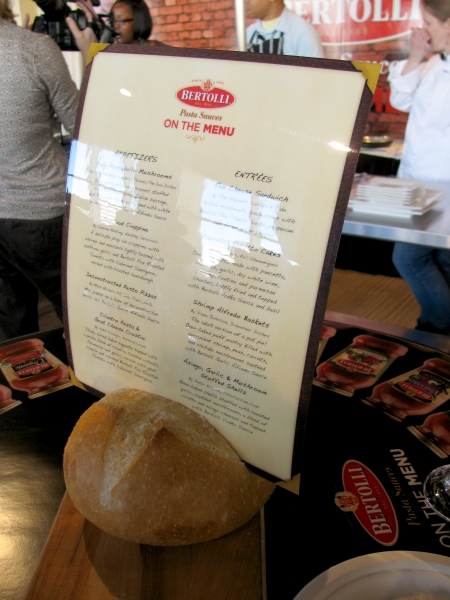 Each table had the Bertolli menu  posted with a loaf of bread as the menu holder, clever!  Oh wait…what’s that?  Let’s look closer… 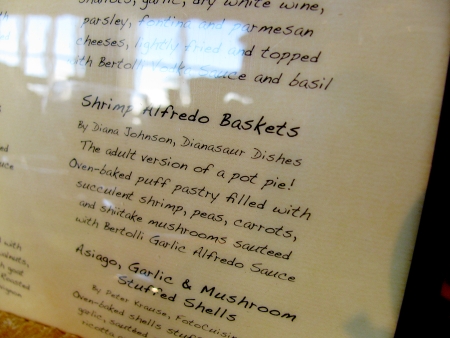 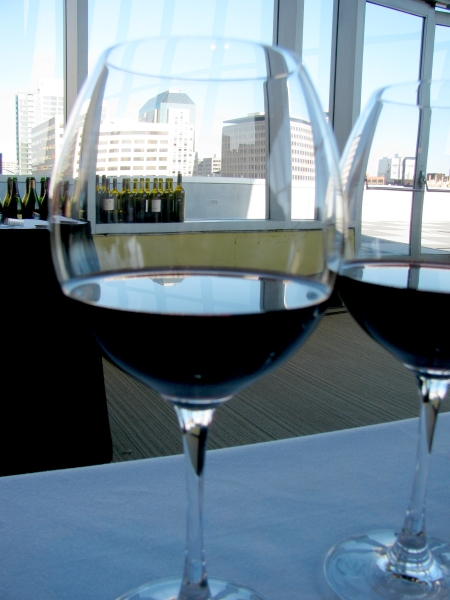 I didn’t get to see the last demo because I was scheduled for a merlot tasting.  I don’t drink alcohol very often, and if I do I prefer beer over wine, but it was fun to do a tasting.  Honestly the best part was the beautiful view of the city! 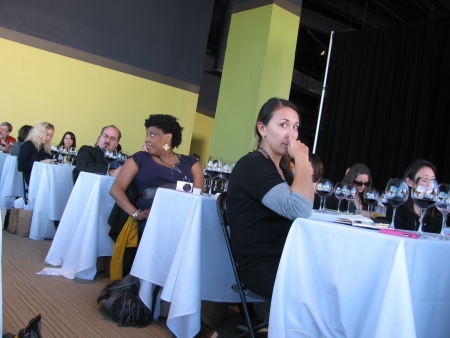 I heard lots of giggling during the tasting, several people had also gone to the sparkling wine tasting earlier.  I think I was the only one who used the spit bucket! 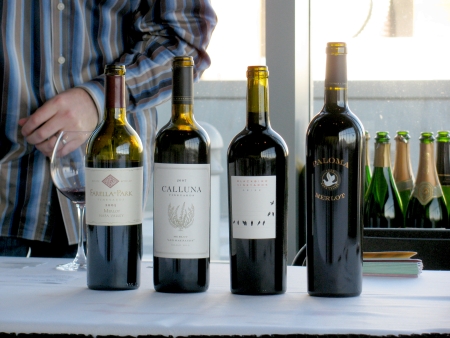 Here were the four wines we tasted.  The only one I really liked was the one on the right, a 2006 Paloma merlot.  Of course, it was the most expensive one at $50-65 a bottle.  Guess that’s another reason I don’t drink wine that often! 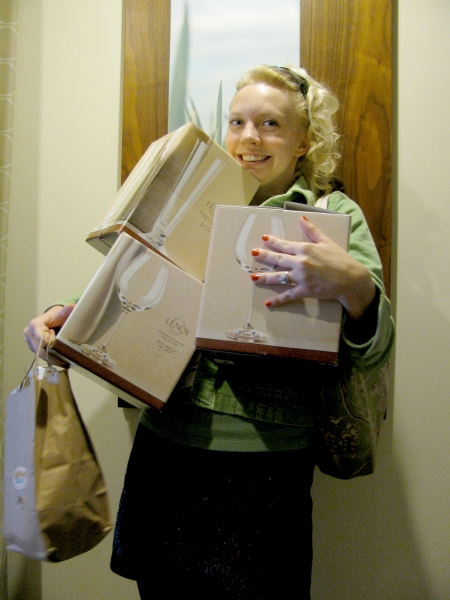 I had plenty of opportunities to work off all the rich food I ate, especially carrying all this swag back to the hotel.  Yes, I walked over a mile with my arms that full of stuff.  Don’t let the size of the bag fool you either, I had a bottle of wine, bottle of olives, and other heavy items in there. 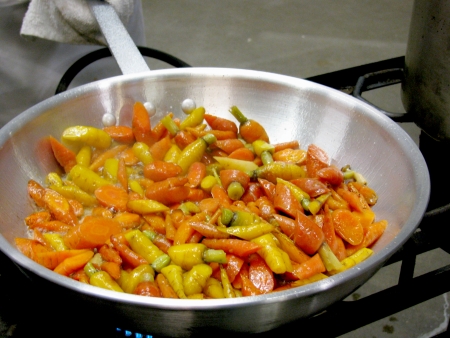 After the Tasting Pavilion, we headed to the Greenleaf Produce Warehouse where Outstanding in the Field set up a farm to table dinner.  I was excited to see vegetables cooking when we walked in, since most of the dishes I’d eaten over the weekend were so rich.  Unfortunately, we didn’t get to eat these carrots until almost 2 hours after they were cooked.  Don’t know if there was a scheduling miscommunication, but most of the food was cold.  At least it still tasted great. 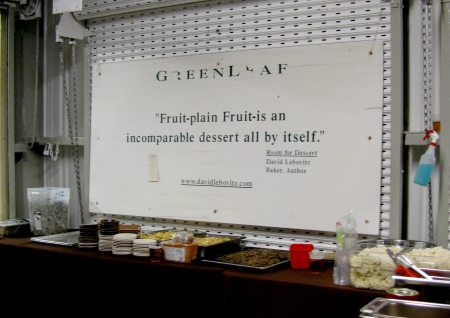 I noticed that Greenleaf must be a fan of food bloggers, or at least David Lebovitz, one of my favorite food bloggers ever.  They had quotes all over the walls of their warehouse, and I totally agree with his.  Fruit is almost always what I want for dessert. 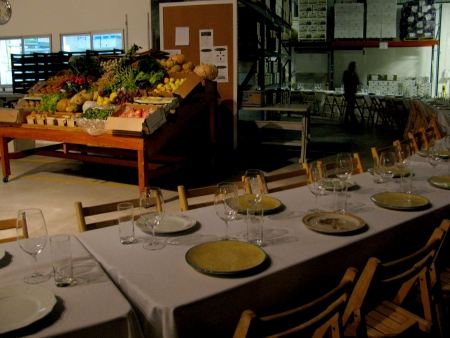 The tables were set up winding around the warehouse with a beautiful display of produce by the office. 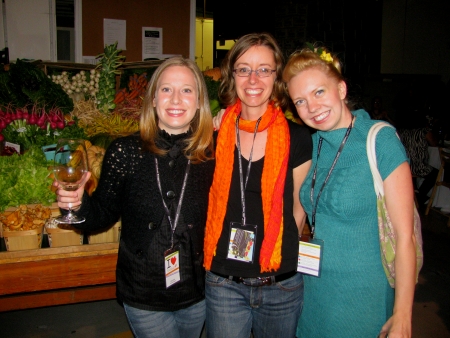 We started out just mingling and it was great to get some time to chat with Kelly of The Pink Apron and to finally meet Christy of Balance.  Those moments of realizing you’re talking to someone whose blog you love are really fun. 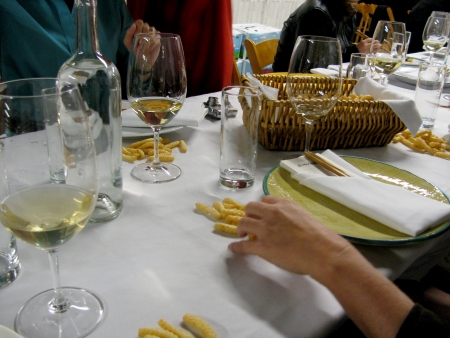 Some of us ended up in what we called Siberia, apparently the new way to save your seats is hiding your business card under your napkin.  So everyone who didn’t have seats saved ended up in the coldest part of the warehouse near the bathrooms.  We weren’t sure if we’d get dishes or food, so began dumping the AMAZING shrimp chips on the table and devouring them. 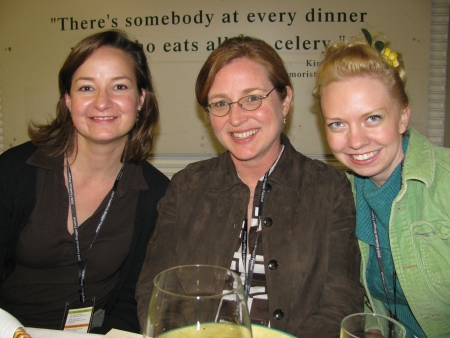 I sat with “Biggie” of Lunch In a Box and Elise of Simply Recipes.  I had the pleasure of meeting Elise at the IFBC in May.  She has one of the first food blogs ever, but my favorite thing about her is that she’s so genuine and easy to talk to.  Getting to spend more time with her was a huge highlight of the weekend for me.  I can’t believe I hadn’t found Biggie’s blog before, since I love bentos.  She was a blast and I loved meeting her and getting to know her over the weekend.