Poor Eric has to work today. It’s a blessing financially, but a bummer for trying to hang out with family. He gets off at 2 and we’ll rush over to my parents (about an hour away). I’m bringing cranberry sauce and cranberry bliss bars. Hmmm, I must like cranberries! Then we’ll try to leave by 5 or 6 because Eric works at 3am Friday morning. The holidays are tough in the grocery business, and the long hours are definitely getting to him.

But we have lots to be thankful for. By really cutting back on a lot of things (driving, eating out, no shopping!, planning free dates, etc) we’ve been able to continue living (barely) below our miniscule means and give a lot to people less fortunate than us. We not doing gifts this year with ourselves or family. So, that’s helped a lot. Really, we don’t need more stuff, and we’d rather creat great memories and help others. We’re also thankful for being near family who love and support us. We are thankful for the freedom of religion we have in the U.S., and for the many other freedoms we often take for granted. We have tons more we’re thankful for, but I’ll stop there. Here’s an easy yummy side dish.

I had a fresh zucchini and was thinking of trying out some zucchini fritters a couple nights ago, but wanted something with less prep work since I was pretty tired and Eric and I are both fighting off getting sick. Less prep is better when you feel lousy. I was searching Foodbuzz and found this recipe. Check out Almost Turkish Recipes, she’s got some great dishes there.

I adjusted it to work with what I had, and I didn’t quite boil the zucchini long enough. Only 10 minute I think, so I’d suggest 15. But we were hungry! 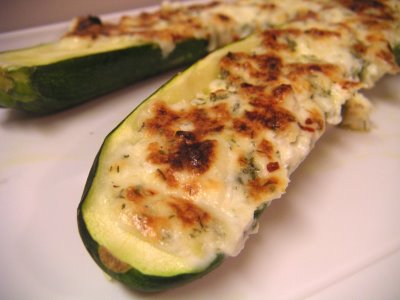 A few small pieces of fresh mozarella torn up small

Wash zucchini and boil until tender but firm. Let cool down. Cut it in half lengthwise to make boats. Scoop out the seedy part and save half of it to use for stuffing.

In a bowl, mix egg, feta, mozzarella, dill, parsley, black pepper, and half of the seedy part of zucchinis until creamy. Load zucchini boats with the stuffing. Sprinkle a couple of drops of olive oil and red pepper flakes on each.

Bake in a preheated oven at 350F for 10 to 15 minutes until cheese melts. Then broil for a couple of minutes to have a crispy top. Serve hot.