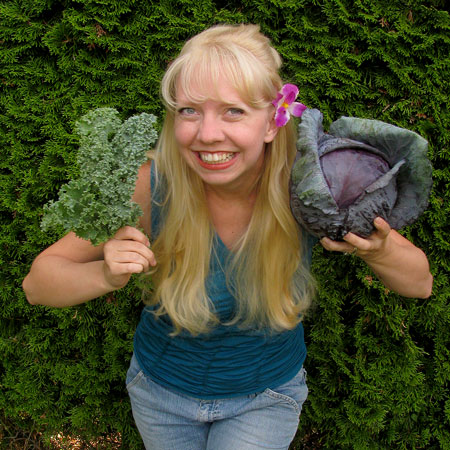 Check out that kale and cabbage!  They really outdid themselves in this difficult growing year.  Now, you may be wondering what the latest news is for the Healthy Cooking on a Tight Budget Program.  First let me fill you in on some of the results of the pilot series.  We had an awesome partnership between the City of Auburn, the Auburn Valley YMCA, the Auburn Food Bank, and Mosby Farms.

The Food Bank provided me with several ingredients that are often turned down by clients, as well as any additional ingredients they had that I was planning to use.  Mosby donated whatever produce they had available in their farmstand.  Then the City of Auburn (through a grant from United Way) paid for the remainder of ingredients and supplies.  The YMCA provided the kitchen facility and free access to the rest of the Y for participants on the day of the class.

I tried to take notes after class every day, and they were usually about my favorite part of class…the conversations that happened.  These classes weren’t about me telling people the best way to cook on a budget.  They were about listening to the community, hearing their needs, and empowering them in the kitchen.  I loved hearing the participants’ stories and watching as their confidence grew every week.  Even better was the conversations that happened as they shared their own tips with each other!

Here’s a few interesting statistics from my notes:

–53 people participated in the program throughout the 5 week pilot.
–At least 11 participants were Food Bank customers and signed up through the Food Bank.
-At least 8 participants rode public transportation to get to the class.
-Over half of the participants mentioned unemployment and finances being their biggest struggle in eating healthy.
-Very diverse classes with at least 6 different minorities and ranging from children to senior citizens.
-Classes were mostly women, with two men on the last day.
-3 of the participants made it to every class; the majority of participants came to 2-3 classes.
-The last class had 8 new people asking how to sign up for the next series.
-Two hour length was perfect for 4-5 recipes.
-The weekly raffle with ingredients was VERY popular.
-Many class members took ownership coming early to set up chairs and staying late to do dishes and clean stove/counter/tables.
-At least 6 participants came in work out clothes to use the YMCA gym after the class, and some participants brought family members to use the facilities on class day.
-2 participants (that I know of) signed up for a CSA with Mosby farms and at least 8 mentioned visiting the farm stand after hearing about it in class.

There were also some pretty awesome success stories.  Here’s just a few of them:

One woman had just gone to the food bank for the first time and saw the flier for the class.  The week she came I was using the canned pork and canned salmon in a few recipes.  She was so excited because she said she had picked them up the day before and had no idea how to use them so they would have just sat on her shelf untouched.  Once she saw them used in recipes and tasted them she was very excited to cook with those ingredients.

Another woman said she NEVER cooked; they ate out or frozen pre-made meals.  Since signing up for my class she began cooking every night and inviting people over to try what she made.  I saw her confidence increase each week as she shared substitutions she made with what was on hand.  She also brought someone new with her to class each week.

Two women (from the food bank) shared they’d been living off of fast food and were excited to learn how to be able to afford healthy ingredients and use them in the kitchen.  They have since emailed me that they’re having fun playing in the kitchen and are even losing weight now that they’re off their fast food diet!

Now for the exciting news.  The YMCA was so pleased with the success of the program that they hired me part time as the Culinary Coordinator!  I will be continuing the Healthy Cooking on a Tight Budget Program on a quarterly rotation, and starting up a once monthly Families Cooking Together class.  Once a month on a Friday evening families can come cook a meal as a group and learn tips on how to cook and eat together as a family. 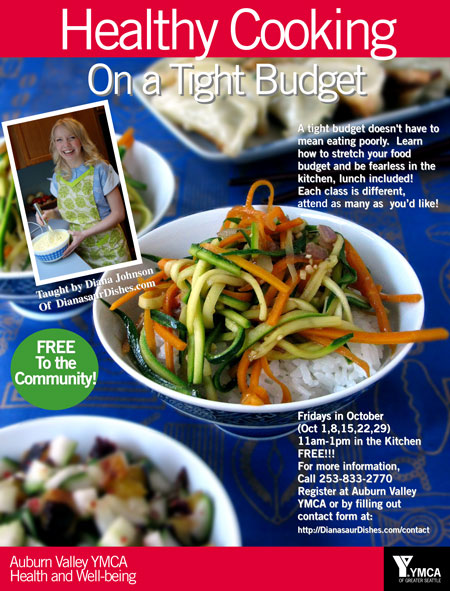 I”m working on a cooking class section for Dianasaur Dishes that will have the recipes from each class featured and make them easy to find for class members.  Unfortunately I don’t think that will be up and running until the winter series.   As I’m now working at both The City of Auburn and the YMCA, I have a lot less time than I used too!  It’s been 6 years since I’ve worked full time so it’s going to take a little getting used to.  But in this economy, that’s a good problem to have.

In other news, I will be speaking at BlogHer Food 2010 about all these exciting things!  I’m really excited to be on the panel Our Food Future: Kids, Cooking and Health.  Here’s the description of our panel:

The nation’s obesity rates have never been higher, and the epidemic isn’t limited to adults: children are affected, too. But some bloggers are out to change not only how kids think about food, but also what they’re eating. Elaine Wu, from Virgo Blue (and BlogHer) moderates a discussion with Diana Johnson (aka DianasaurDishes) who is pulling a Jamie Oliver in her own community and Laura Sampson from Hey, What’s For Dinner Mom?…who helps parents strategize on how to get their kids to eat more healthfully. Finally, this panel will feature Mrs. Q from Fed Up With School Lunch, the anonymous school employee who is documenting what it’s like to eat just what the kids eat every single day for a year.

That’s right, I just got compared to Jamie Oliver!!!

8 thoughts on “Healthy Cooking on a Tight Budget Program UPDATE”