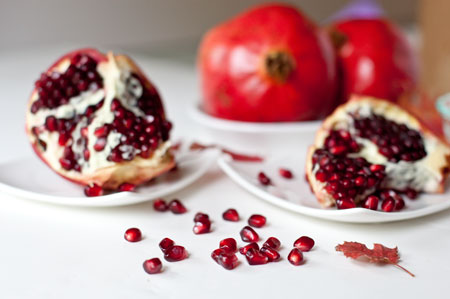 It’s pomegranate time!!!  I previously mentioned that strawberries are one of the jewels of the food world.  While I still hold that to be true, I strongly believe that in the fall and winter, pomegranate arils or seeds reign supreme as the culinary gemstones.  I love all things pomegranate, from lotion to juice, from hand soap to molasses.  While I don’t know (yet) how to make my own pomegranate lotion, I do make homemade pomegranate juice and pomegranate molasses.  It takes a little time, but saves a lot of money!

I love POM pomegranate juice, in those curvaceous bottles its siren song seductively lures me toward the grocery store end caps.  But unless it’s severely on sale the sticker shock always prevails over my pomegranate obsession.  “You’re on a budget!” cries the voice of reason.  I have to admit, that you my dear readers help hold me to that budget without even knowing it.  When I think about splurging (especially if it’s perishable) I ask myself, “Can my readers afford this splurge?”  If the answer is probablynot, that reminds me that I probably can’t afford it either!

In a pomegranate post last year I said “You can try squishing the seeds to make your own, but I recommend just buying the juice separately.”  What was I thinking?! I mean yes I can get it on sale, and Trader Joe’s brand can be more affordable than what you get at most grocery stores.  But ultimately, when pomegranates are in season, and I can get them for $1.50-$2 a piece, it makes sense to juice them myself.

So this year I finally decided to try it.  I bought 6 pomegranates to play with and dedicated one of them to testing out some juicing methods and see if it really is cheaper to make my own pure pomegranate juice and molasses. 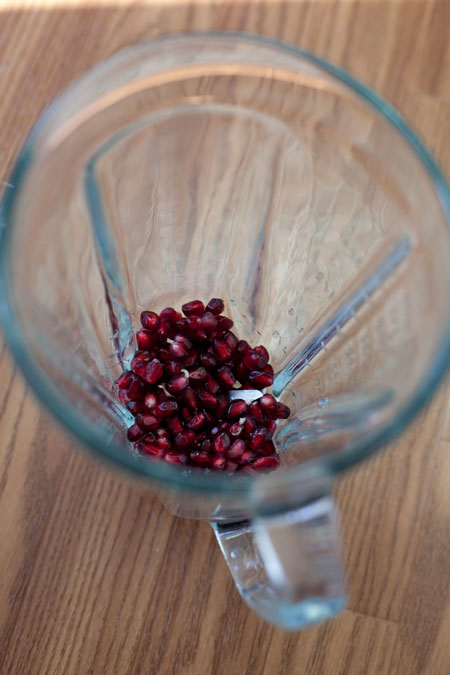 If you have a juicer, this would probably be a great method.  But if you’re like me and are just watching craigslist for a like new juicer being offered at one tenth the normal cost, the blender is your best bet.  I found that by simply blending all the pomegranate seeds I can get a TON of that rich ruby juice.  It’s way easier than trying to smash the seeds. (Yes, that experiment felt like a terrible blond moment)

Once they’re all blended I just pour them through a mesh strainer and then use a spatula to  press and stir the pulp and push all the juice out.  I find that each largish pomegranate makes me about 2 cups of juice.  You can just drink your juice and enjoy every last drop knowing you made it yourself, or you can turn it into pomegranate molasses to use in various recipes.

In the interest of health, I have to share a few pomegranate nutrition facts.  Pomegranate juice has been the focus of many studies, several of which tout it’s value as a cholesterol buster as well as being beneficial in preventing a re-occurrence of prostate cancer.  According to Wikipedia, an 8 oz  glass (1 cup) of pomegranate juice provides approximately 50% of an adult’s recommended daily allowance of the vitamins A, C and E, 100% of folic acid, and 13% of potassium. 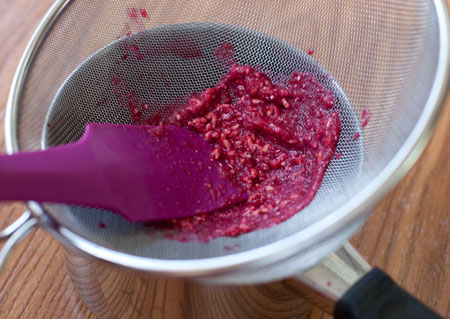 Now that you know some of the health benefits of pomegranate juice, now here’s the warning.  Drink in moderation!  Pomegranate juice also reaches your maximum daily recommended amount of sugar.  Although it’s all natural, that means it contains as much sugar as an equal amount of Coke.

Pomegranate molasses is basically a reduction of pomegranate juice, which means cooking it until some of the liquid evaporates and it thickens into a deep dark syrup, kind of a rich pomegranate sauce. I’ve tasted a few different bottled versions and find that the ingredient lists often have brown sugar and lemon juice in addition to pomegranate juice.  That does up the sugar content, but the molasses is usually used in very small quantities (as opposed to drinking an entire cupful!).

We don’t buy sweets and I don’t make them very often, so we don’t get super concerned about sugar content.  But if that’s something you or your family struggles with, I suggest making just 1/4 a recipe at a time.  Once you have a whole jarful of this super sweet tart syrup in your fridge, it’s tough to resist!

Pomegranate molasses is a very common ingredient in Middle Eastern cooking, but it’s not limited to that.  I’ll have a couple different recipes using pomegranate molasses this month, as well as some using just the seeds.  It’s one of those ingredients that’s fun to experiment with, and that’s a lot easier to do when it’s cheap to make.    A 10 oz bottle of  pomegranate molasses is typically around $6 in stores. (It’s cheaper online but you have to factor in shipping).  I can get pomegranates as cheap as $1 each at the local Russian grocery store.  Even if you get them for $2-3, it’s a lot cheaper to make the molasses yourself at that price than to buy a bottle of it.

Have you played with pomegranate molasses before?  What’s your favorite way to use it? 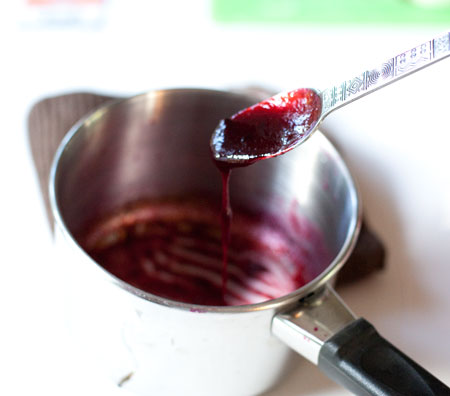 Cut and seed the pomegranates, discarding the pith.  Blend the pomegranate seeds in a blender until juicy and frothy.  Pour blended seeds through a mesh strainer using a spatula to stir and press all the juice through.

Heat the strained juice in a pot on medium high and add brown sugar and lemon juice.  Let the juice boil lightly, stirring occasionally until thick and syrupy.  Remove from heat and store in a jar in the fridge.