Curing bacon at home has been a pretty popular topic for food blogs over the past couple years.  Unfortunately,  every time I thought about making bacon myself the inevitable “It’s too hard” tape would start playing in the back of my mind.  Curing bacon is something that butchers, chefs, and guys who want to be butchers or chefs but actually work at a computer desk all day do.  No way am I good enough or brave enough to try such a culinary feat. (But I did! Video below!)

Then in comes my friend Michael Ruhlman.  You may remember Michael from my trip to Mexico for Food Blogger Camp back in January.  Yeah he’s the awesome chef/writer who I knew absolutely nothing about and had to ask “Why is everyone in awe of you?”.  Fortunately he seemed to find that amusing and now that I’ve gotten to know him and read several of his books, I recognize his passion and knowledge and have a lot of respect for him. 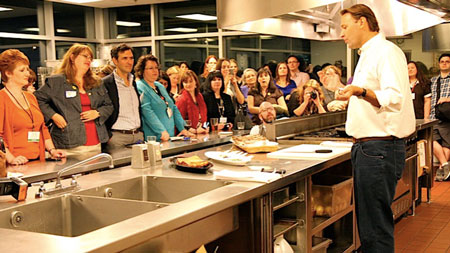 (thanks to The Italian Dish for photo use)

I was a speaker at the BlogHer Food Conference this October in San Francisco where  I got to talk about all the awesome things going on here in Auburn as I try to change our food culture.  The closing party was an awesome event that revolved around one of my favorite foods, you guessed it, bacon.

As part of the event, Michael did a demo on how to make bacon…from scratch.  I’ll be honest I was expecting this  complex process and tons of specialized ingredients.  I was excited but never thought the demo would end with me itching to get home and make homemade bacon. 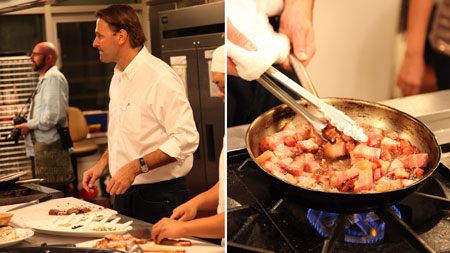 (thanks to Eat the Love and Marquis Photography for the photos)

I was surprised to find that the ingredients were pretty much things I already had at home; items like brown sugar, kosher salt, pepper, garlic.  The only things I would have to buy would be the pink curing salt and a pork belly.  MMMM, pork belly just sounds good.  Why is it thought that whenever I hear pork belly I think of buying stocks?  Is that from a book I read or something?

Not only were the ingredients simple, the process was too.  In fact it was so easy I had to make video of myself so you’ll believe me and make your own bacon as well!

How to Make Bacon from Diana Johnson on Vimeo.

So now you know how to make bacon, and let me tell you, this is some of the best bacon I’ve ever eaten.  We’re talking high quality, make you drool, gourmet bacon eating!  But before you go off and buy yourself a pork belly to make home made bacon, lets talk about how to make it more affordable.

If you just buy a pork belly at a grocery store you’re probably going to be paying more than it would cost you to simply buy a package of bacon.  Although it still tastes way better and will probably be better for you (especially if you’re getting hormone and antibiotic free pork), we’re all about cutting costs here.

Asian markets can be a great source for pork.  I went to our nearest market and headed straight to the butcher.  He didn’t speak a lot of English but loved that I knew a little Korean (like two words!).  I did my best to explain that I needed pork belly for making bacon.  He steered me away from the pork belly in the refrigerated case and handed me a package he had just finished cutting and wrapping.  Not only that, he gave me a discount!  So my bacon ended up costing me only half of what I normally spend on the yellow plastic packet of bacon.

If you don’t have a friendly Korean butcher, you still have some options.  Try checking out local butchers in your area.  If they have meat that’s not as fresh or if it’s been frozen, they’ll sometimes discount it for you.  Or if you plan on making a lot of bacon and will buy in bulk you can often get a discount as well.  A local butcher is a lot more likely to work with you to get a regular customer than a grocery store.

You can also buy pork in bulk just like we buy beef in bulk.  I see whole and half shares of pigs on craigslist all the time from anywhere from $1-3 a pound.  You’ll have to pay a higher amount up front and end up with lots of other cuts, but in the long run your price per serving of everything will come out so much cheaper.

The other key ingredient that you probably don’t have at home is the bacon curing salt.  This pink salt is called sodium nitrite salt and is the thing that gets some people the most scared about making bacon.  Sodium nitrites have been linked to cancer in some studies (linked, not proven to cause).   The important thing to keep in mind is that it there are large, I mean LARGE doses of sodium nitrite necessary to be harmful enough to cause cancer.  We’re talking pounds and pounds here!

Back to the bacon recipe…you can leave the sodium nitrite out if you’re really worried, just know that it won’t give you that same bacony flavor.  It gets its pink color from dye which is just to keep people from eating it accidentally.  Personally I’ve never eaten of spoonful of salt, but maybe that’s just me.  I bought my curing salt at the local butcher store, but in the future I’ll buy sodium nitrate online which is the cheapest way to go (unless you can get a nice butcher to give it to you for free!).

The final step is the cooking.  If you have a smoker feel free to smoke it, but I can’t afford one so just did mine in the oven (hey you could add some liquid smoke if you want!).  Once you get comfortable with this basic curing recipe, you can really start playing with the add-ins.  I used a little fresh thyme for this recipe.  You can also use juniper berries, other fresh herbs, maple syrup…what do you want your bacon to taste like?

As you can see, the first thing I made with my bacon was the best BLT I’ve ever eaten.  I’ve also used the bacon in salads, soup and even a cheese mummy!  What do you want to make with homemade bacon?

Mix all the cure ingredients (salt through thyme) and rub the cure on all sides of the pork belly.  Place pork in a gallon sized zip top plastic bag and put in the fridge for seven days.  Flip the bag daily to make sure liquid that’s drawn out is evenly distributed.

After one week, preheat the oven to 200 degrees and remove cured pork from fridge.  Rinse all the cure off the meat and pat dry.  Place the pork on a rack in a baking dish or pan tray.  Cook for 90 minutes or until internal temperature reaches 150 degrees.

Let the meat cool, thinly slice it into strips and you’ve got your bacon!!  Refrigerate what you don’t cook up right away and freeze the rest within 5 days.

Approximate cost/serving: As I said in the post, the cost depends on how cheap you can get your pork belly.  For me the cost came out to about $2 a pound or at an ounce a slice, 13 cents a slice.

34 thoughts on “How to Make Bacon at Home”