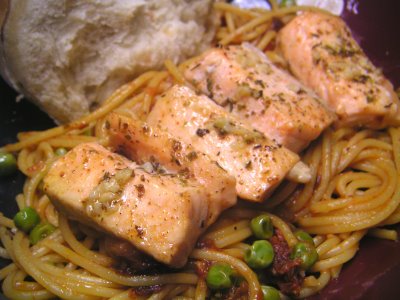 Yes, I actually set my oven on fire last night. I was trying out a new recipe from Emeril. I had some salmon thawed in the fridge and really wanted to incorporate pasta. With the prices of food continually climbing I try to use less meat and more pasta, rice and produce in our meals to be able to stretch our grocery budget. I found this recipe and thought it sounded good.
Notice the instructions say to put the oven rack in the highest position and set it to Broil. The problem with that was when the oil all over the salmon and pan started popping and jumping, it would land on my extra hot heating element at the top of the oven. Fortunately, I was watching it since it was supposed to have such a short cooking time, and saw the flames start up.
Eric was at his computer and heard me calmy say “uh-oh” and saw flames shoot out as I opened the oven. He came running over but the flames died down quickly (as the oil burned off) and I moved the pan to a lower rack. Somehow, even though I set the oven on fire, it turned out incredible! Eric thought it was the most amazing salmon ever. (Actually this is the second time I’ve made a fire while cooking salmon. The first time was with my friend Hilary making blackened salmon at her house for Thanksgiving. She didn’t have a deep enough pan and thought it would be okay to melt two sticks of butter in her shallow one. When she flipped the salmon the butter splashed over into the burner and flames shot up to the ceiling! But it was great salmon)
This was a really great dish, the pasta is also great on its own, we both brought the extras to work for lunch today. A few things I changed: I used a sundried tomato spread instead of sun dried tomatoes (we got it for way cheap at Safewy because it’s being discontinued). I also used lemon juice in the pasta instead of lemon zest just because I didn’t want to wash the zester! Instead of “Essence” I used Tony’s Creole Seasoning which I LOVE on salmon. I forgot the parmesan, so it’s still good if you don’t have any, but I’m sure it makes it even more delicious. I also used marinara sauce from a jar I needed to use up, instead of plain tomato sauce. 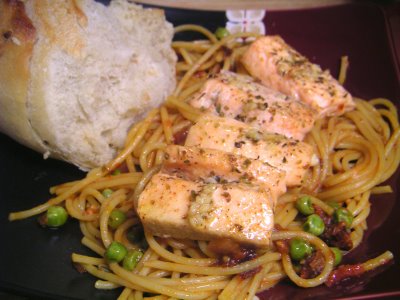 Directions
Adjust the oven rack to the top rung in the oven and preheat broiler.
Set a 6-quart pot with a pasta cooker insert over high heat, and fill with 1-gallon of water. Bring to a boil and add 2 tablespoons salt to the pot. Add the pasta to the pan and cook until al dente, about 8 to 10 minutes.
Meanwhile, heat a 14-inch skillet over medium-high heat, and add 1/4 cup of the olive oil to the pan. Once the oil is hot, add the onion and garlic to the pan and saute until the onions are translucent, about 3 to 4 minutes. Add the lemon juice, crushed red pepper flakes, marinara sauce and sun-dried tomatoes to the pan. Add about 1/2 cup of the pasta cooking water to the pan as well as the pasta and peas. Season with salt and cook, stirring often, until the pasta is fully cooked, and well dressed with the sauce. Keep warm until the fish is cooked.
Line a half-sheet pan with aluminum foil and drizzle with the olive oil. Slice each salmon fillet into several 1/2-inch slices, and season with the Creole Seasoning. Lay the salmon, shingled, in 4 portions on the sheet pan and sprinkle the oregano and lemon juice on top. Combine the remaining 1/4 cup of extra-virgin olive oil and minced garlic in a small bowl, and pour over the salmon. Set under the broiler and cook until the salmon is slightly caramelized on top, about 2 to 3 minutes. Remove from the oven, divide the pasta among 4 entree plates, sprinkle with the Parmesan and lay a portion of salmon atop each plate of pasta. Garnish with chopped parsley and more Parmesan if desired.

0 thoughts on “If I set my oven on fire but my food’s still delicious does that make me a great cook?”