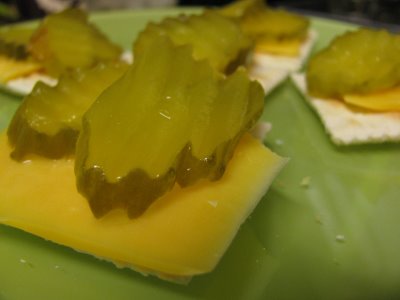 This is the only food I’ve made today. For some reason when my stomach is upset I only want pickles and ginger ale and sometimes saltines. As I was able to keep those down I decided to throw some cheese and mustard in the mix, similar to one of my weirdest snacks pickles cheese and mustard sandwiched in a taco shell. Anyway, as I mentioned here, Eric and I have been sick. He fortunately got healthy really quickly, I unfortunately did not. I’d feel better for a day and then worse. Then I noticed a lot of pressure building up in one ear, and some hearing loss. I figured I had an ear infection and yesterday called to set a Doctor appointment for after work today.

Eric ended up having to rush me to the hospital after work. My ear was so painful to the point that I was hysterical and telling him I wanted to die. Yeah, that bad. I don’t really remember it that clearly but I definitely wasn’t myself. 800 mg of Ibuprofen and a heat pack helped and by the time we got to Urgent Care I was feeling better and a little silly. But apparently I was not overreacting, when the doctor looked in my ear she said “Whoa!!!” because it was so red and inflamed. I’d probably had an infection for over a month, as I mentioned to her that when I’d run on a treadmill I’d always be leaning/falling to the left. The nurse said it’s good I came in because if an ear infection gets bad enough and affects the lymph nodes, they’re also connected to the brain and it can be dangerous.

I’m on an antibiotic, but refused the narcotics for the pain. I only regret that a little because I woke up in agony last night when the Ibuprofen wore off. But I was on narcotics the first couple of months with Eric thanks to the excitement of our first date (info and gross pictures) and don’t like how out of it they make me. They also did some blood tests today to check on some other symptoms I’ve had, as well as having my primary care giver take a look at me. I already have less pain than yesterday though I still feel weak and tired. My PC doctor basically said “you seem okay” and punted me to a specialist, Eric is pretty frustrated with the healthcare system. I’m too tired to be right now.
Another prayer request is that our car is no longer driveable, we had to take it to our mechanic again and it’s beyond hope. Finances are tight (like everyone else!) and I missed a week of work due to being so sick, so it’s going to be difficult to find a good reliable car in our budget. But God can do anything!

Two happy things though. We have an awesome team of leaders for Life Hurts God Heals, the teen recovery program we started at our church. With just a couple hours notice they took over running the program last night and did an awesome job. We’re only in our 7th week and are so proud of them and thankful for them. We weren’t even concerned about how it would go. The second thing is I got my first blog award! Thanks Mommy Gourmet! I’m so honored and way excited. Tomorrow evening I’ll read the rules on it and pass it along. Hopefully in the morning/afternoon Eric and I are attending a marriage conference at our church. It’s next door so I can go home if I feel bad. Oh, and I have to write up my Daring Baker’s challenge tomorrow too! I’d better get to bed. See you all tomorrow! 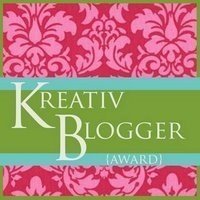 0 thoughts on “I’m not well but hopefully getting better”