The last time we were in Sam’s Club they had a 12 pack of organic andouille sausage for only $6.  I got really excited since I’ve recently discovered that organic pork doesn’t make me sick, and it was so cheap and could feed us for several meals.  I put most of them in the freezer but saved some out to play with.  I began surveying our fridge and pantry and decided to make jambalaya.  In case you didn’t know, Jambalaya is a Creole dish from Louisiana.  I believe it’s influenced by both Spanish and French cuisines.  It started as an attempt to make Paella with what ingredients were available.  I call mine Kapakahi Jambalaya because it’s created with what ingredients I had on hand and in no way authentic.  Kapakahi means “mixed up” in Hawaiian. 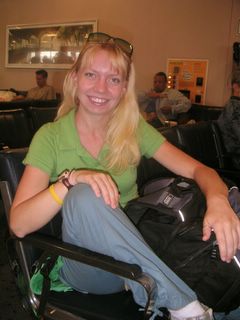 I’ve been to Louisiana a couple times, once was just driving through, more recently was doing disaster relief after Hurricane Katrina.  I ate twice as much a day as I normally do, but I was also spending 8-10 hours a day doing heavy labor mudding out houses.  It was a lot of work, but the opportunity to encourage the owners and pray with them was incredible.  For them going through their destroyed possessions would be impossibly heartbreaking.  I also got to deliver meals and water with the Red Cross.  I ate lots of Jambalaya and my favorite dish was mudbug casserole.  I absolutely loved the people of Louisiana, though I had to be pickier about what I ate there.  I’ve never had stomach problems in any third world country I’ve been to, but there was so much fried food in Louisiana I had some major issues!
I had some leftover rice from stir fry, but not enough for my jambalaya, so I also used a box of rice a roni that someone had given me a while ago (just the rice not the flavor packet).  I didn’t have any tomato sauce, so used my one can of tomatoes and some ketchup.  I had a couple corn cobs to be used up and so boiled them, and some peppers about to go soft that I chopped up with celery and red onion.  I used little salad shrimp that I had in my freezer that were cheaper than the regular sized shrimp.

One thing I’ll do differently next time is chop the vegetables a lot smaller.  Normally I like chunky veggies but they would have worked better finely chopped in this dish.  It was pretty easy to make and super filling.  We had a couple bowlfuls for dinner, then I froze the rest.  I’ve been freezing lots of soups and stews for winter while veggies are so affordable.  Now enjoy some jambalaya, and if you’ve been to Louisiana maybe it’ll make you think of mud bug casserole, frogs legs, catfish, alligator and fried pickles too!

Cook sausage in a large stock pot until browned.  Add rice a roni, stock,water and Tony’s seasoning and simmer for 15 minutes.

Add remaining ingredients except for shrimp, stir well and simmer 15 more minutes with a lid on.

Approximate cost/serving: This seems a little expensive to make, but by getting such a great bulk price for sausage, and using tiny shrimp, the whole pot comes out to around $12 which is only $1.20 per serving.

Vegetarian/Gluten Free: Jambalaya traditionally contains sausage and seafood, but you can make this into a spicy vegetable and rice soup.  I’m not sure if rice a roni or Tony’s seasoning are gluten free so read your labels.