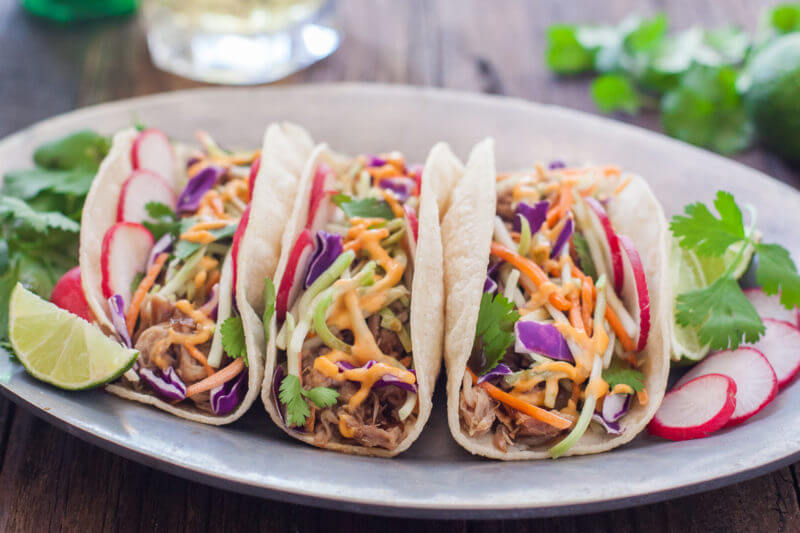 Three words: Korean Tacos Recipe. I think I could just leave it at that with all the drool worthy pictures, but I won’t. Because I seriously have to tell you how bomb diggity this recipe is and how I have to plan on everyone eating double the serving because they’re so mind blowingly awesome!

I know, I just used lots of dorky words that aren’t even words, but that’s how good they are. I lived in Korea for three years, so love this type of Korean fusion food. Plus, Larkin helped make the tacos, which is totally cuteness times ten. Trust me, this post is worth reading! 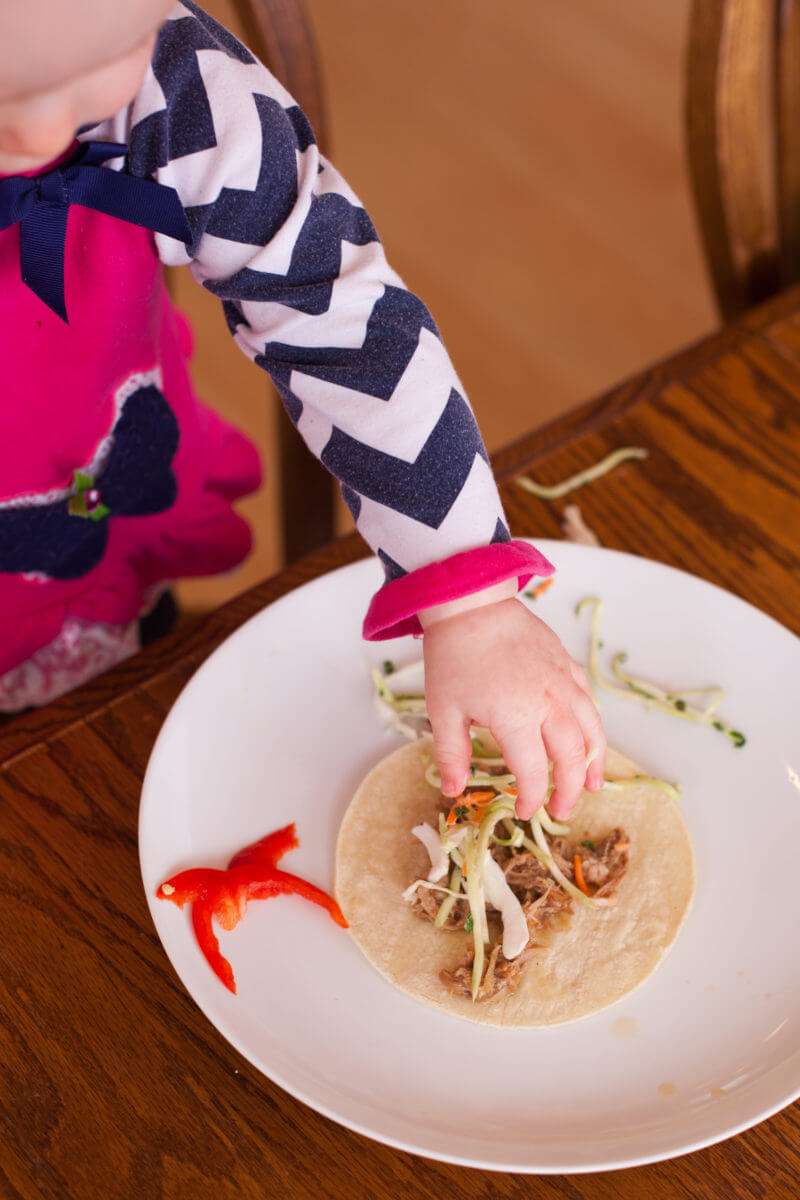 So the pork for the tacos can really be its own recipe. In fact I think I’ll also post it separately, because you could use it on buns for a Korean pulled pork sandwich, on rice, or stir fried veggies, and maybe just eat it on its own with a fork, straight from the crockpot. Because I’ve done that. 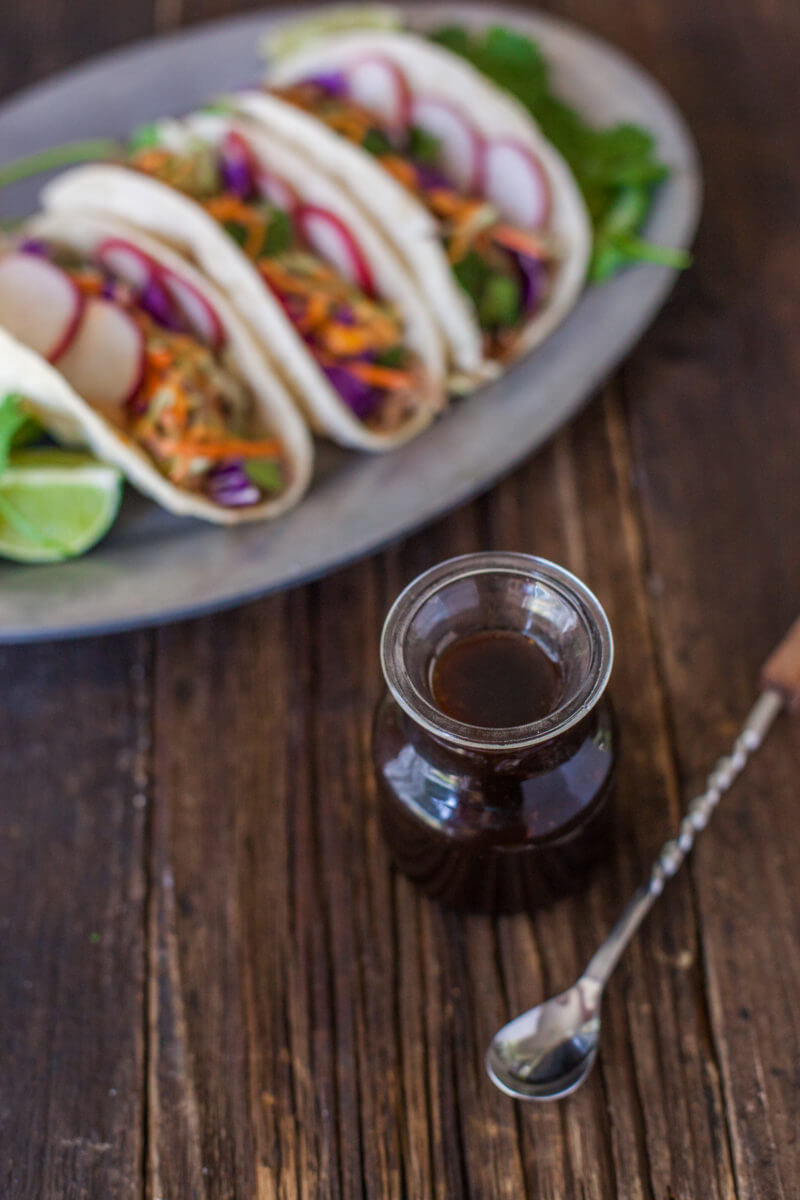 What makes this so addicting is the sauce that the pork is cooked in. While it looks complex with more than 10 ingredients, it’s super easy to just dump them in and get an incredible marinade of complex flavors that is truly irresistible.

The pork shoulder (you could also use a beef roast if you want) is basted in the sauce, and then cooked in a crockpot, while the rest of the marinade is reduced on the stove to make a thick and glorious Korean BBQ sauce. 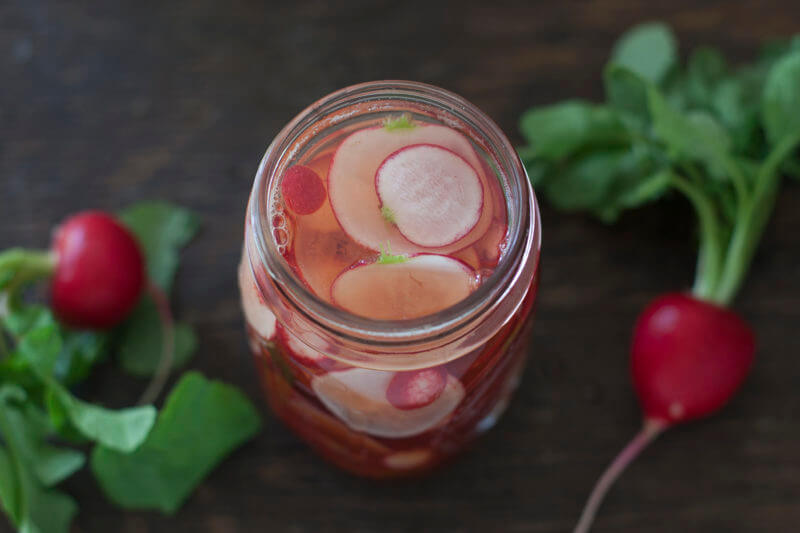 Quick pickled radishes are a great condiment for Korean BBQ because the vinegar in the radishes really balances out the umami sweetness of the Korean BBQ sauce. 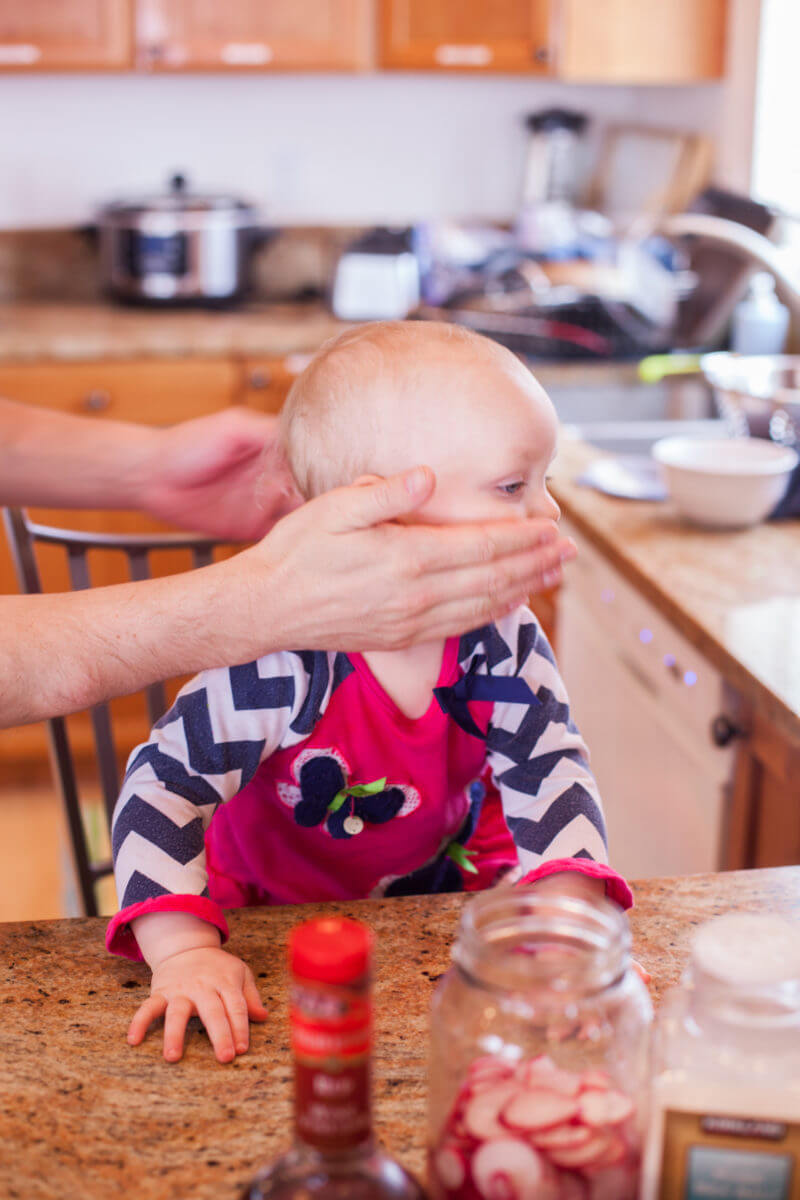 We spent the last week at the ocean with Eric’s family, so decided to have Larkin pickle the radishes when we served these tacos one evening. Notice the great dad technique of making sure her nose is clean before she’s on camera. 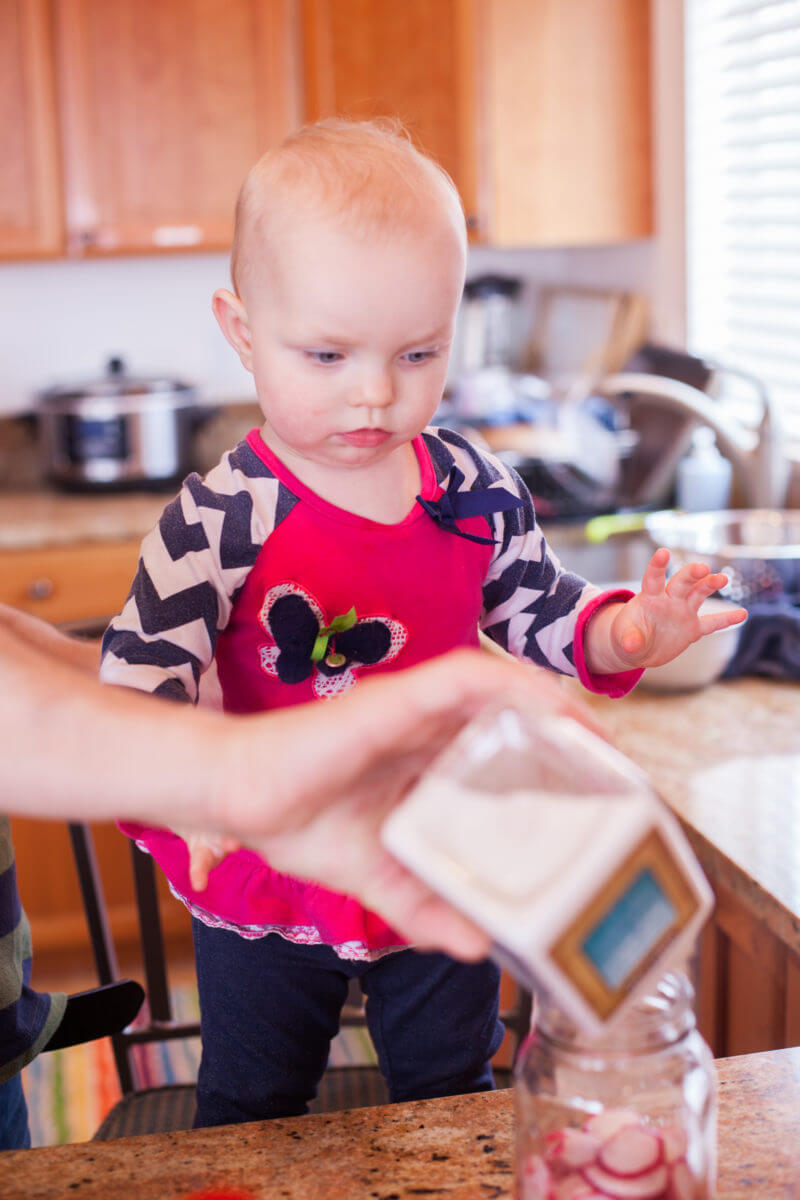 First Eric showed her how to shake the salt in. 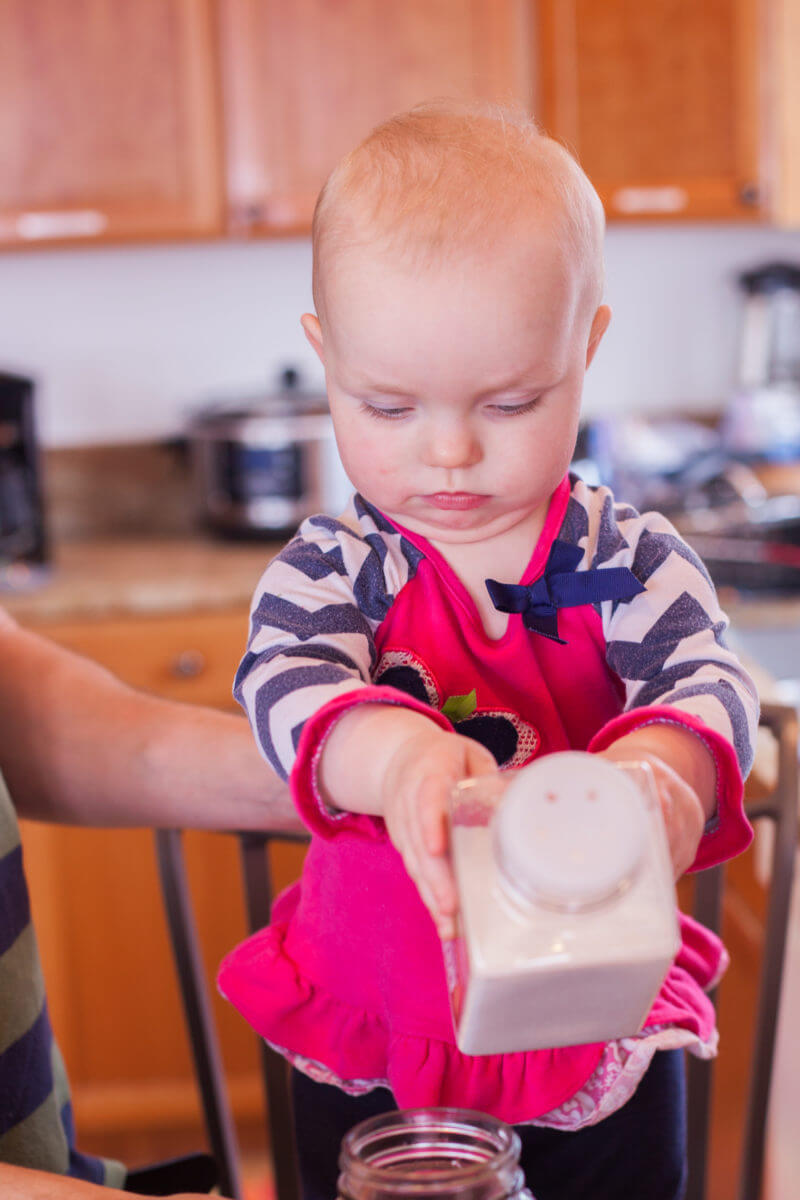 “Wait, is this the GOOD sea salt?” 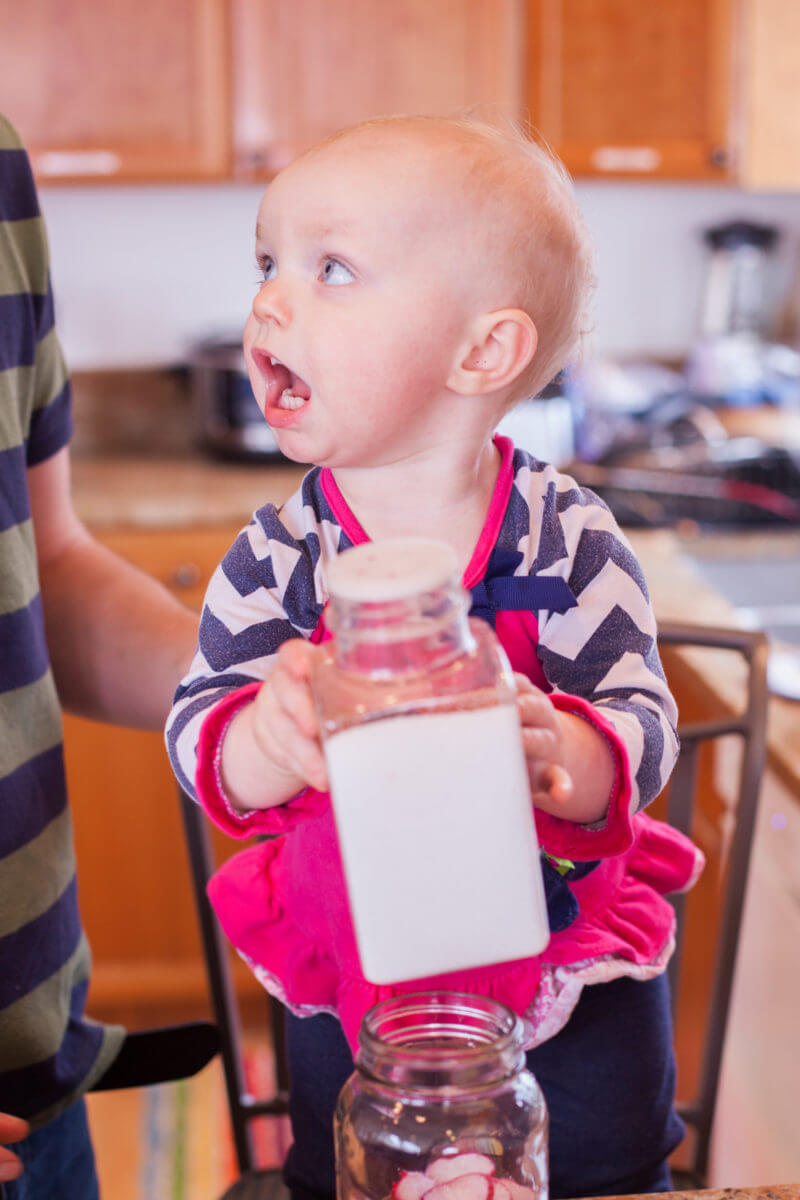 “It is dad. You know we have to use quality salt.” 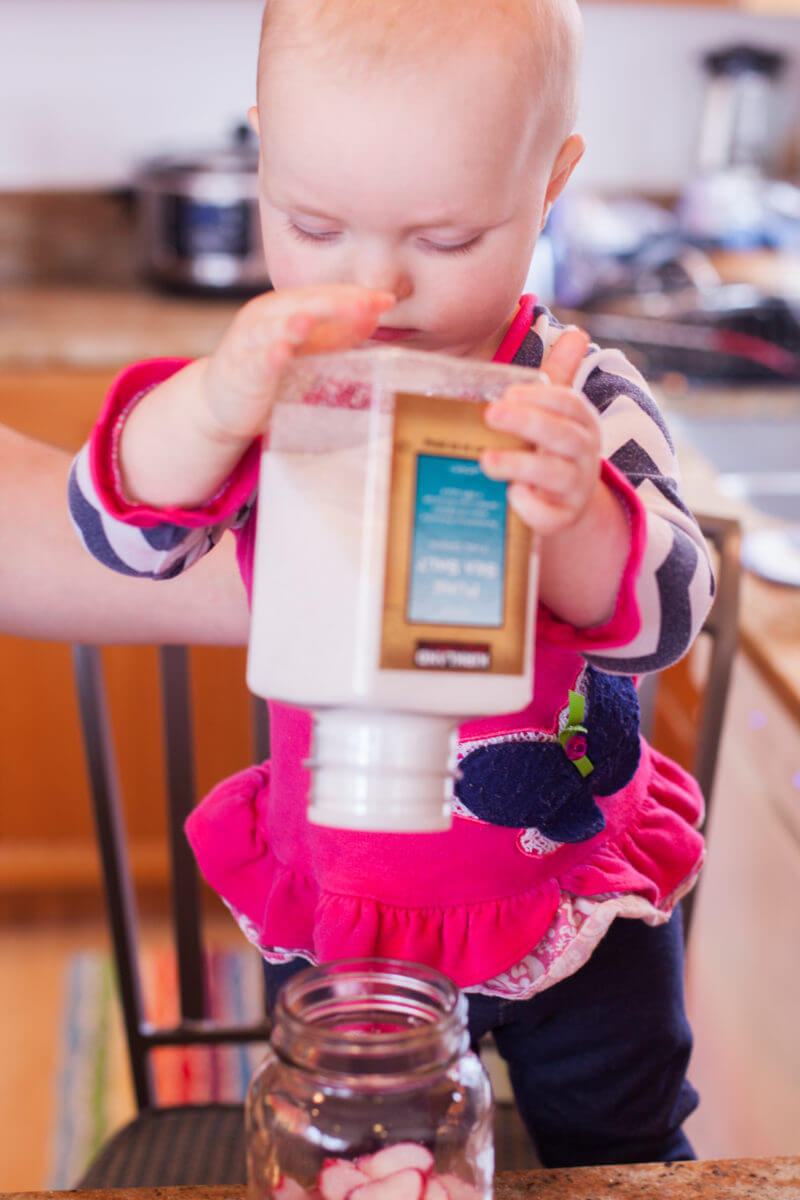 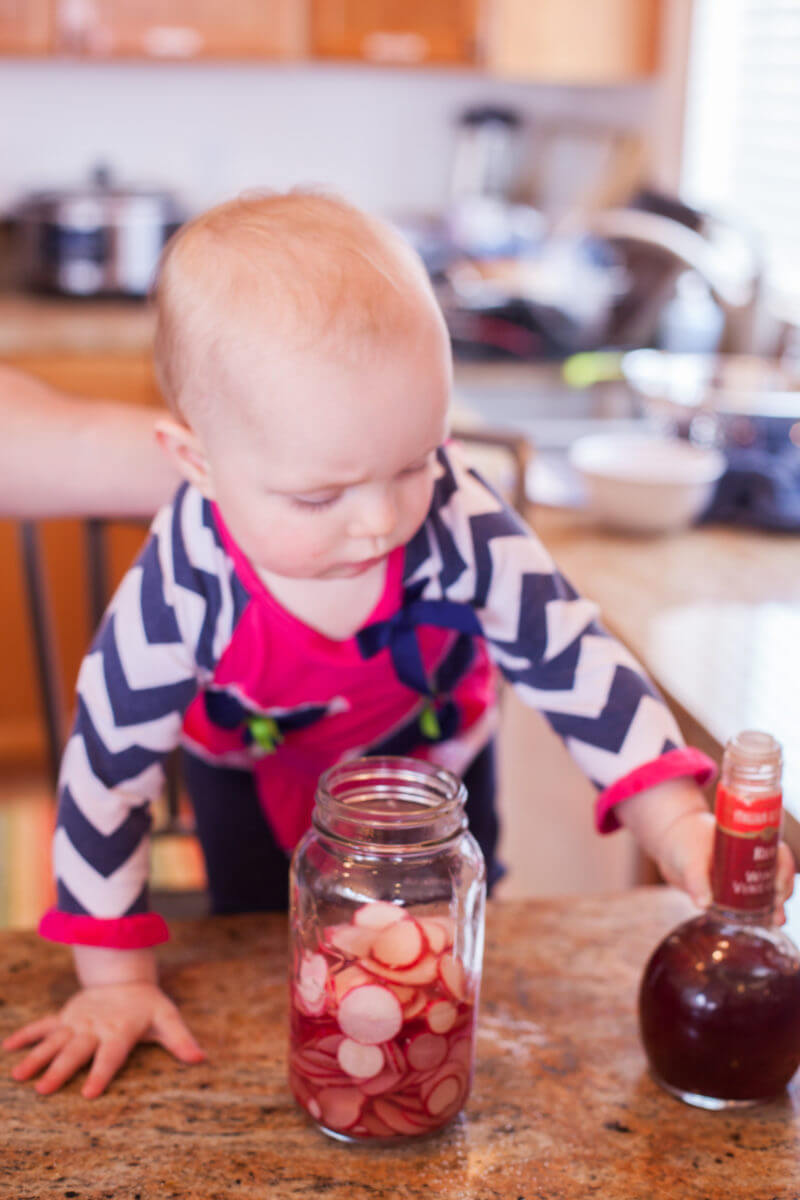 Next comes the vinegar. And this is where things started to go horribly wrong. 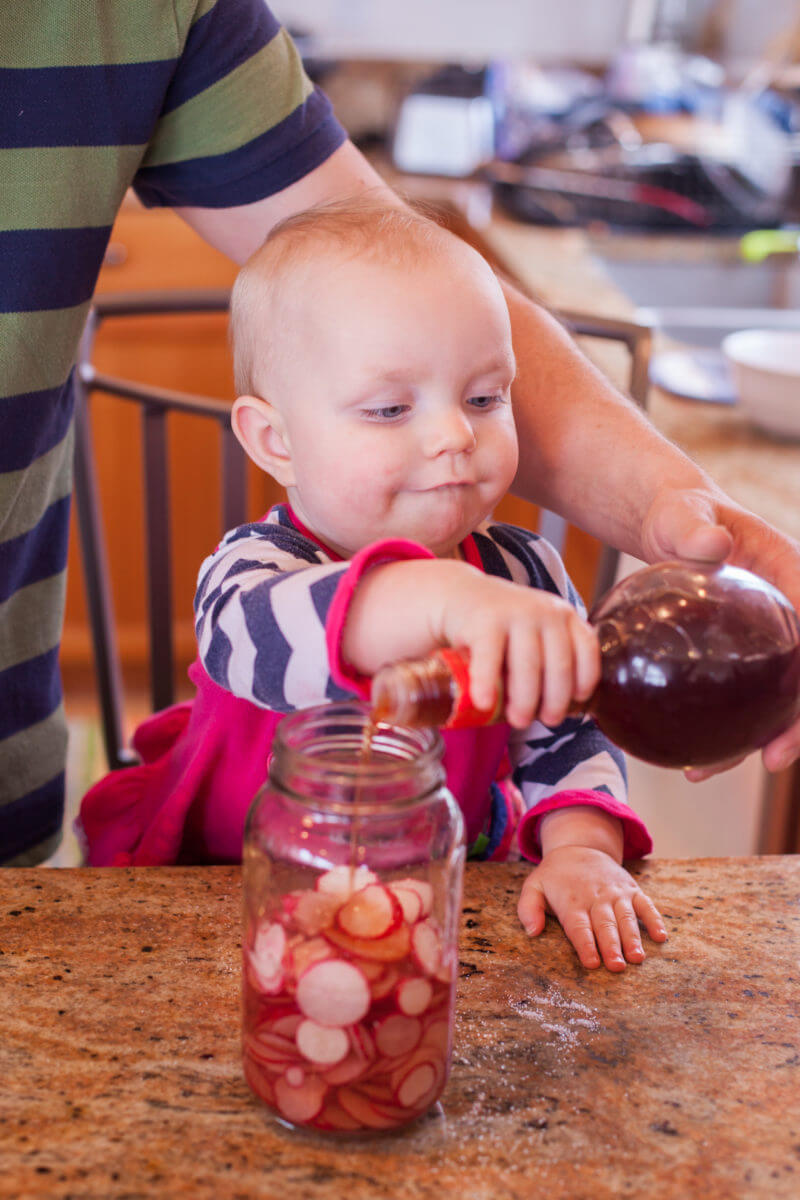 We should have just had Eric continue holding the bottle. But no, we wanted the perfect shot of her doing it herself.

I didn’t get a picture of the aftermath but the good news is that no one got cut, and the bottle broke in a way that none got into the jar so the radishes were still good to go. 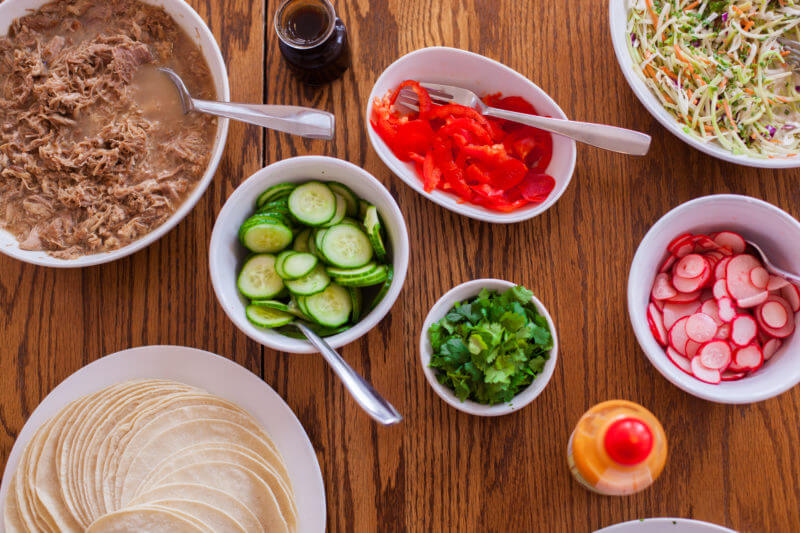 When I’m making these for just our family, I’ll go ahead and make tacos for everyone. But when I’m serving a crowd, I like to lay everything out in separate dishes so that people can build their own tacos exactly how they like them. 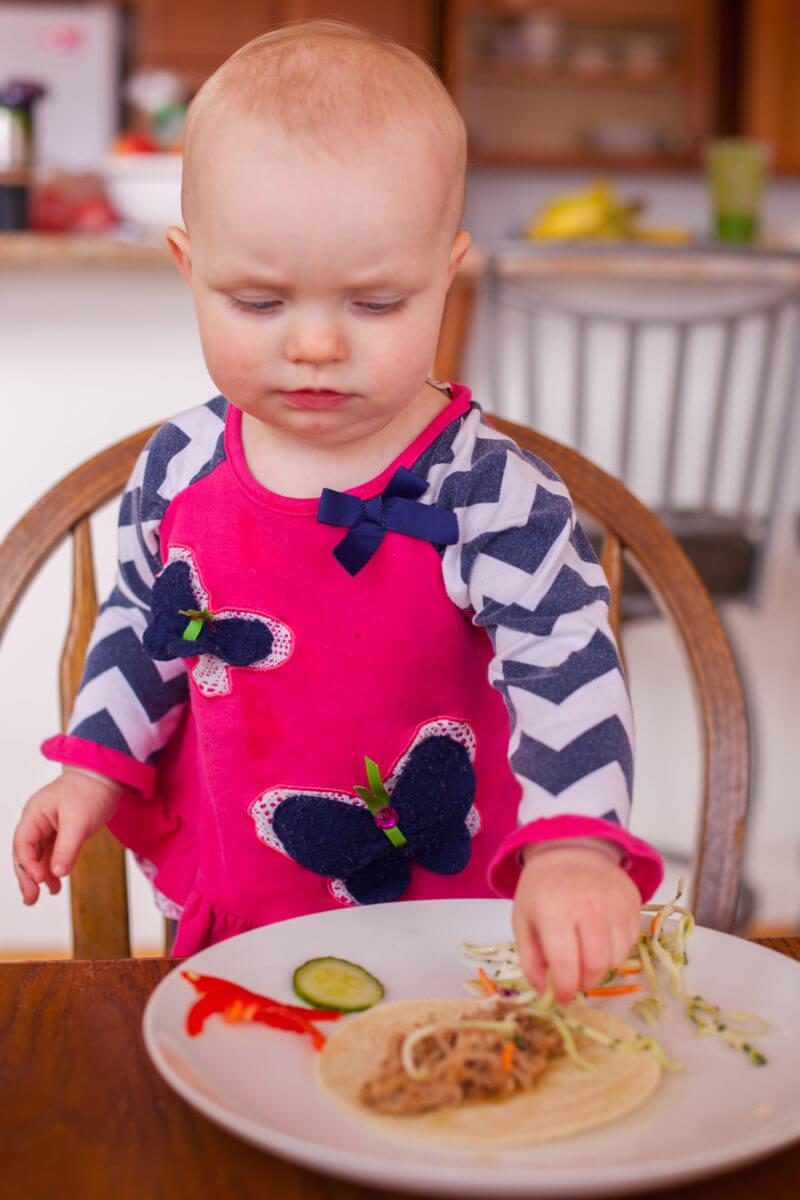 Larkin went for LOTS of pork and a few veggies. 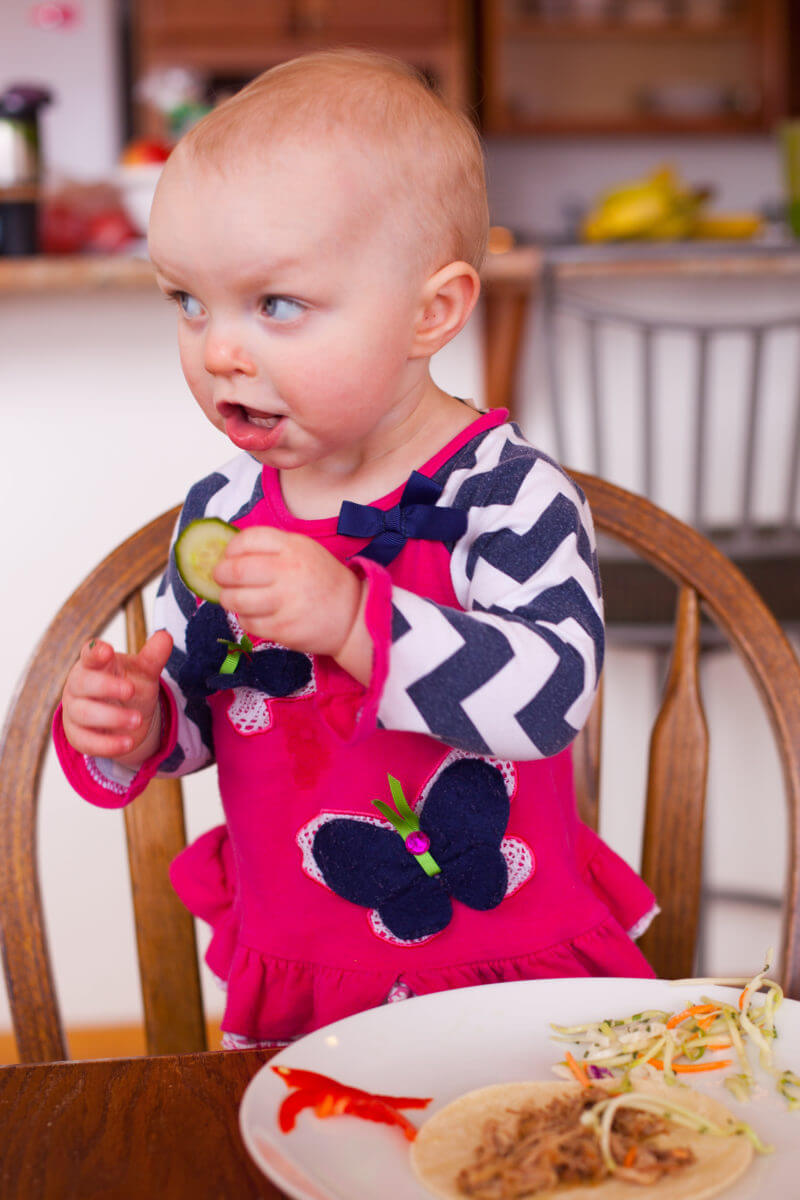 Actually she had lots of veggies, but she ate most of them instead of putting them on her taco. I’m good with that! 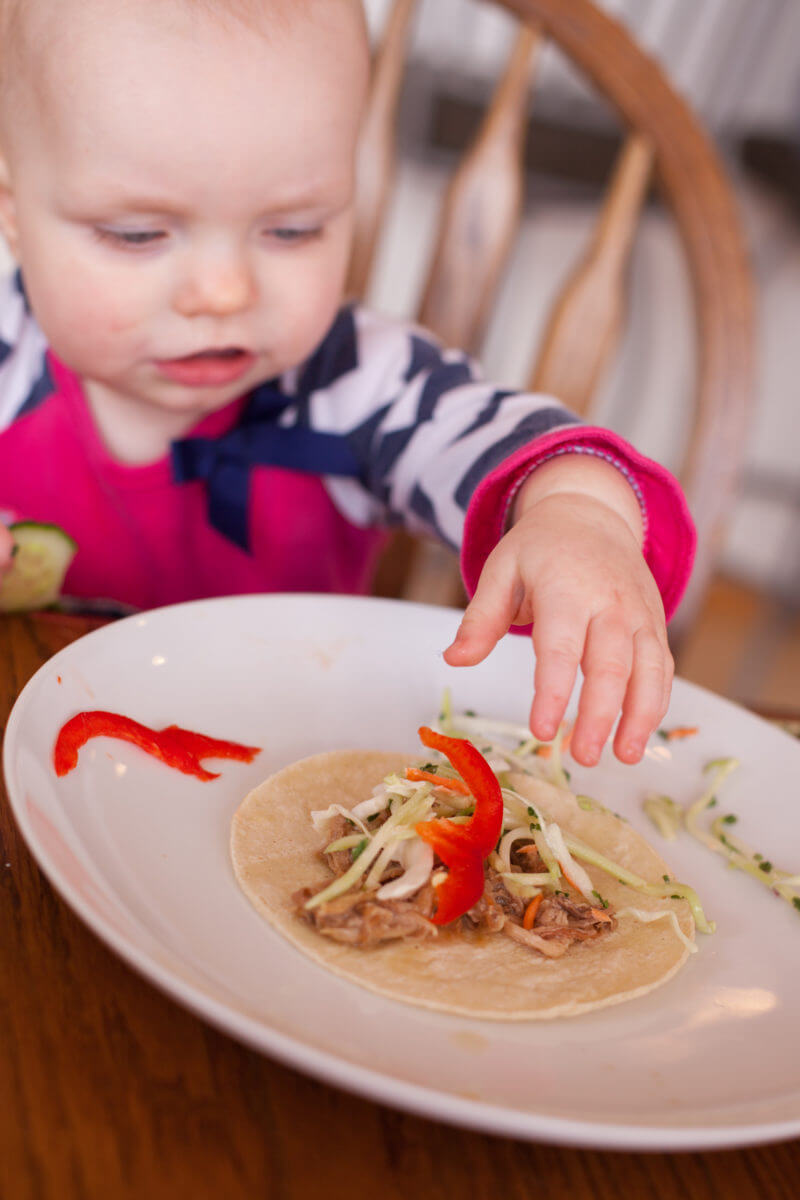 I really love that the kids enjoyed these Korean tacos as much as the adult, and had a lot of fun building their own. 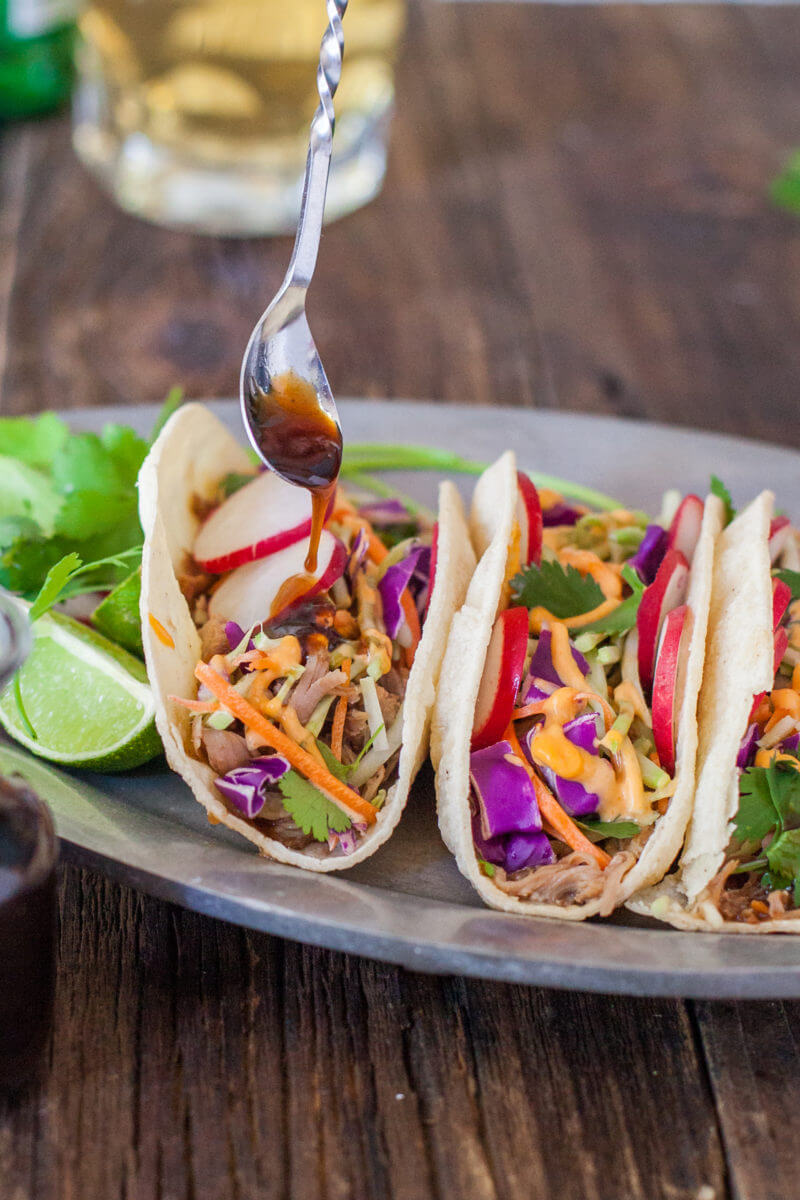 Once you’ve stuffed your tacos with slaw (I like a broccoli slaw mix that has carrots and red cabbage in it), pickled radishes, cucumber slices, and cilantro, it’s time for the sauces. 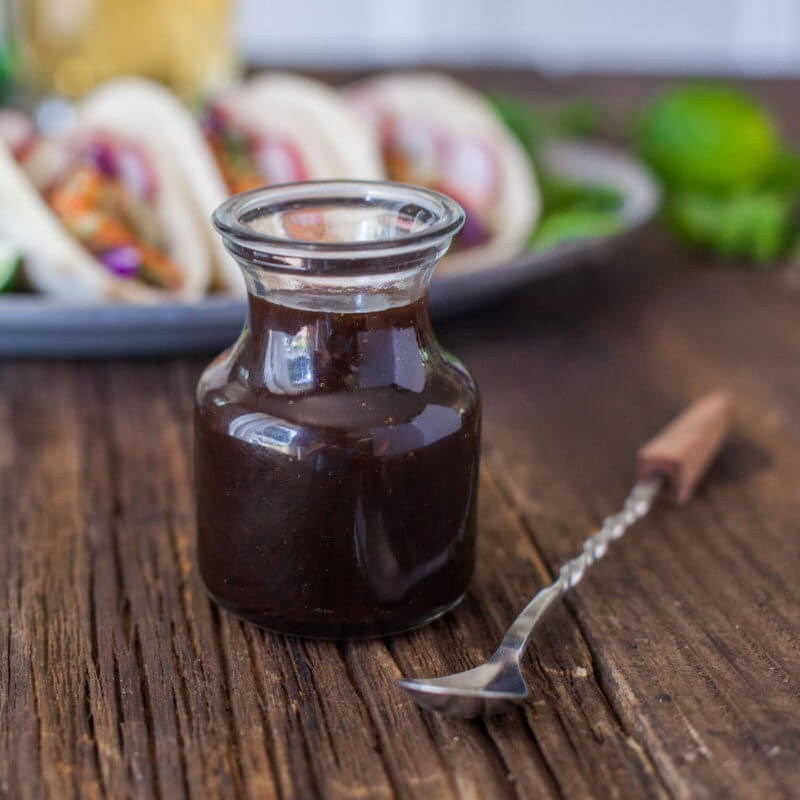 Drizzle each taco with your irresistible Korean BBQ sauce. A little goes a long way. 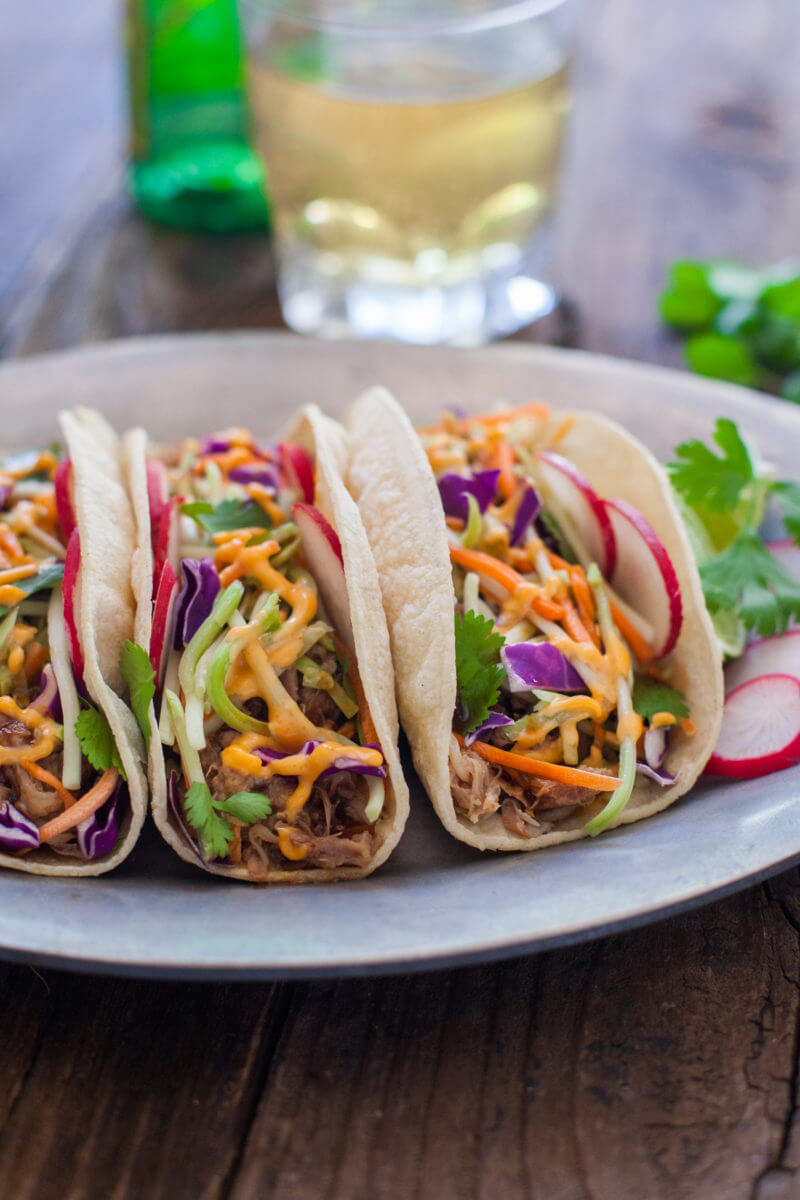 The final touch for the Korean tacos is creamy, spicy sriracha mayo. It’s got a good kick to it, but once it’s on the tacos with all the other flavors, it’s not overwhelming at all.

My kids and I kind of want to just drink it from the bottle. 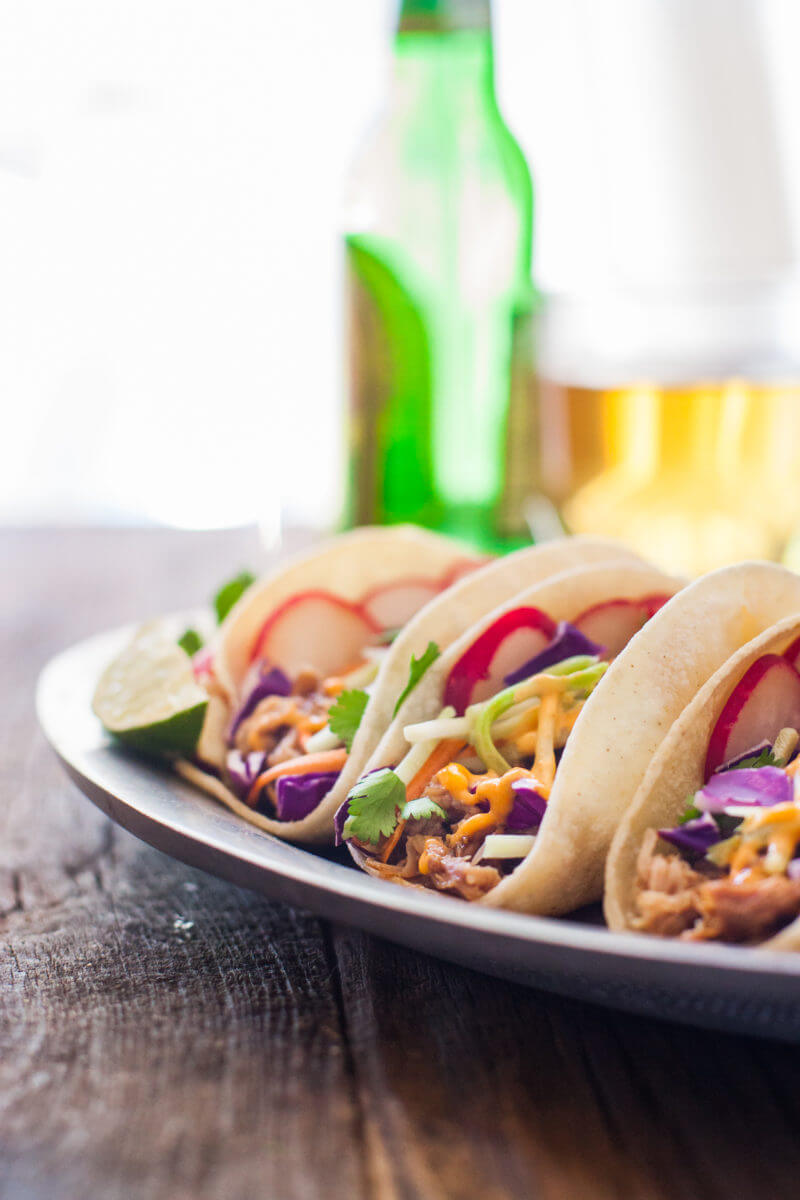 By the way, Korean tacos go amazingly with ginger beer for a non-alcoholic pairing. Like, AMAZING!

Even the kids love it, though we water it down quite a bit for them to reduce their sugar intake. 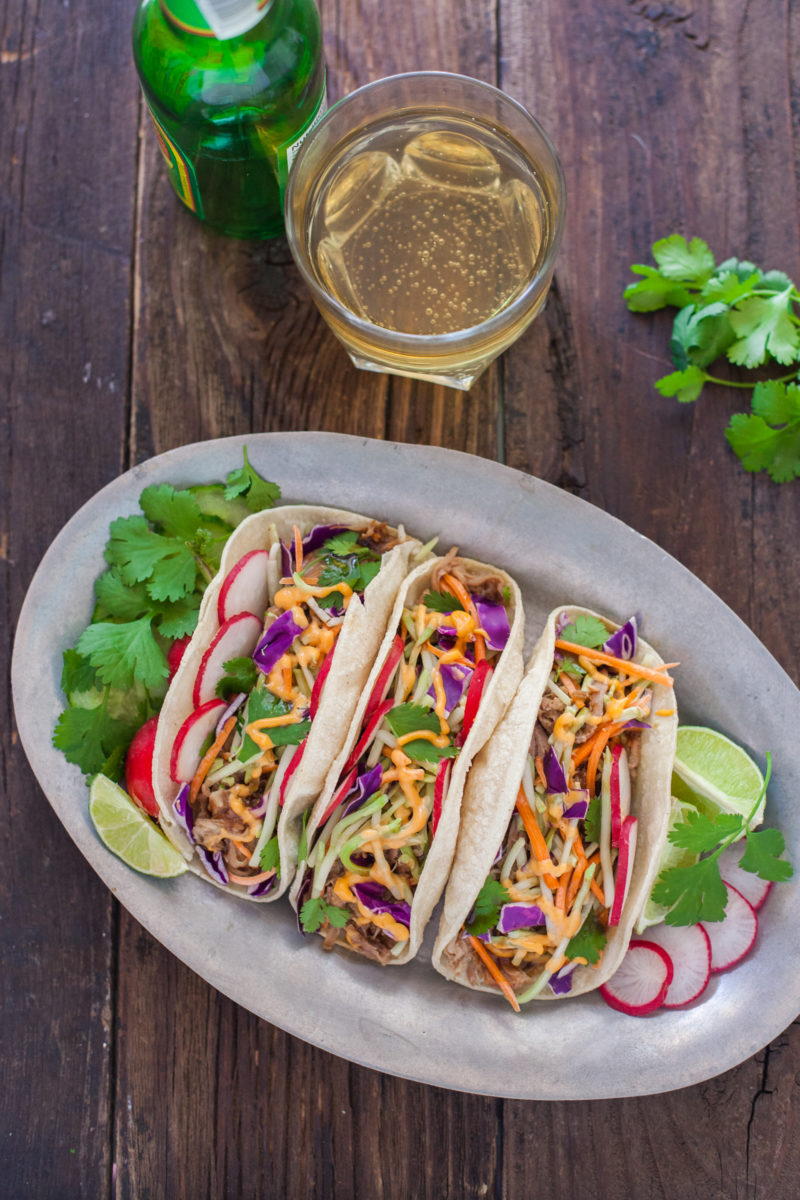 And there you have it, the best Korean tacos ever. No you can open your own food truck!

OUR FAVORITE INGREDIENTS FOR KOREAN TACOS

Here’s some links to our favorite ingredients and supplies for Korean tacos. By clicking through one of these links to buy ANYTHING from Amazon, you don’t get charged extra, but we make a small commission from whatever you buy. Thank you for supporting our family business!

19 thoughts on “Korean Tacos Crockpot Recipe is to Die For!”