Eric and I are big Netflix fans. Being a nerd, Eric keeps track of our Netflix account on Feedflix, which tells us how much we spend per DVD rental. We find that although we enjoy movies, we tend to get more TV shows. They fit better in our schedule since you can choose whether to watch one 45 minute episode or more. You also have convenient places to pause if you need to do something because it’s arranged for commercial breaks.

Lately we’ve been watching episodes of Discovery channel shows and miniseries. We just finished the first season of Everest and it was so fascinating. I was shocked at the drive to reach the top of this mountain, knowing it could mean death. That year it was film had the most deaths (11) and it was hard to watch. There were 600 or so climbers which meant traffic jams from people who weren’t experienced enough to attempt it. This led to even experienced climbers getting severe frostbite. I was so moved be the emotional journey these men went on, and kinda angry for their poor wives as they put their lives at serious risk. But the deaths were the hardest for me and I cried after the last episode. When someone dies on a reality show it’s not like a movie, they’re a real person. 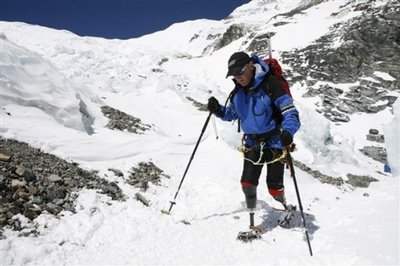 One of the most moving stories was of Mark, a double amputee who lost both legs to frostbite. His strength and courage was astounding, but I thought it interesting that after he was done he said if he had known the risk and sacrifice on the way up, he would have turned around and not summitted. Anyway, although it made me sad, it was very well done and we’ve added season two. I decided since I was sad from Everest, we should watch an episode of something funny, Dirty Jobs. 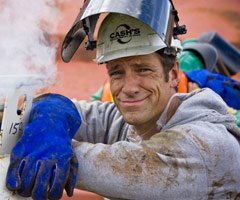 Unfortunately, the episode was about being a pig farmer. Somehow, I guess I’d never thought to deeply about it, but I pictured pigs, cows and chickens being raised on those storybook farms. They run around and live happy lives and then are one day killed for food. I’m okay with that. I love animals, but I also believe it’s okay to eat them. I don’t judge or look down on anyone who feels differently, and hope they can give me the same courtesy. But I had no idea how truly these pigs would be treated. Within their first day of birth their teeth and tails are cut short and they’re given two shots, one of iron, and one antibiotic because of the open wounds in their teeth and tails. They are kept in little pens and they don’t even breed normally (that was so disturbing). I just felt sick after watching it. 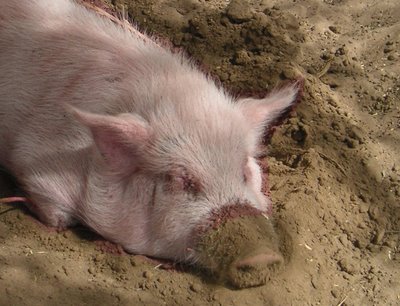 I LOVE pigs, I think they’re so cute. I’ve always had a fascination with them. I’m allergic to pork so eat very little of it. But now I’m rethinking all the meat I eat. I’m not planning to become a vegetarian, I like meat. But I am definitely thinking about eating less, and looking at getting meat that was treated humanely during its life. We have friends who raise 3 grass fed cows at a time and treat them so kindly. Whenever they come out and call the cows, they come running and are really happy. Buying our beef from them would definitely be more expensive, but I’m starting to feel pretty strongly about the idea. Our budget is tight, and all the unecessary expenses are already trimmed away, so I’m not sure how we can afford getting more expensive meat. But my eyes have really been opened and I can’t claim ignorance anymore.

0 thoughts on “Last night the Discovery Channel traumatized me”