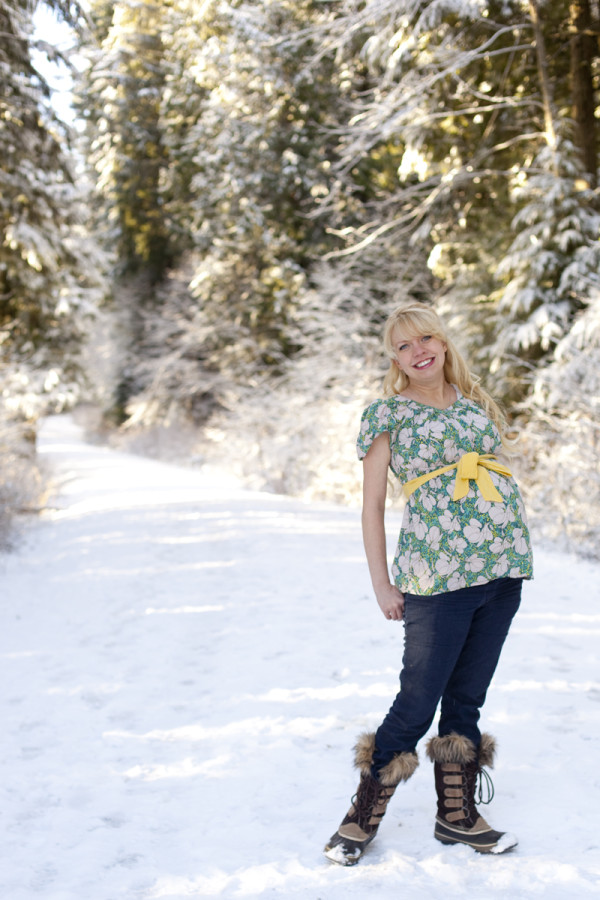 Friday was THE day.  Eric and I had a list of things that absolutely had to be done before the baby arrived, and there were three items left. He had practical tasks on the list, like picking middle names and packing the birth center bag. I had one item left, maternity photos in the snow.

I had it firmly in my mind that Friday, January 11th, was my deadline.  That way I would have everything done that needed to be,  and still have a week or more to do other things like cleaning the house and finishing the nursery.  I was still certain that my baby was going to come after his due date.  Silly Diana! 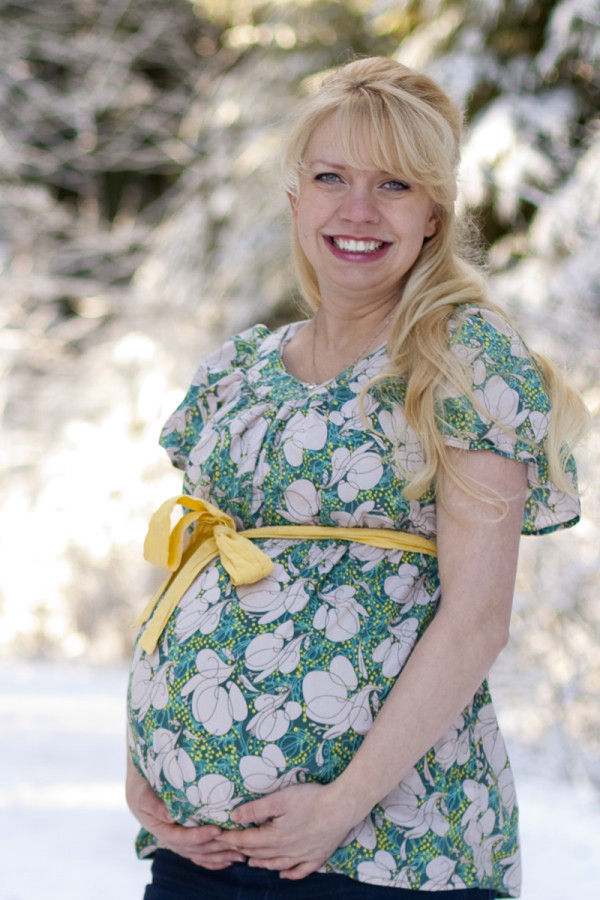 Friday morning was bright and beautiful, a perfect day in our unseasonably warm winter.  I jumped out of bed excitedly… okay, I rolled slowly and painfully out of bed and headed straight for the bathroom, I WAS almost 39 weeks pregnant after all. But I was definitely excited for our day once the pressure in my bladder was relieved.

Eric and I spent the morning going over our packing list. We gathered the final items, double and triple checking the list that was divided into columns for mom items, dad items, and baby items.  We had the basics like clothes, towels, and snacks.  We also had special items like LED candles, music, and framed photos from our honeymoon of my favorite Hawaii beaches, all to help me in relaxation and focus for the hours and hours of labor I was planning for. 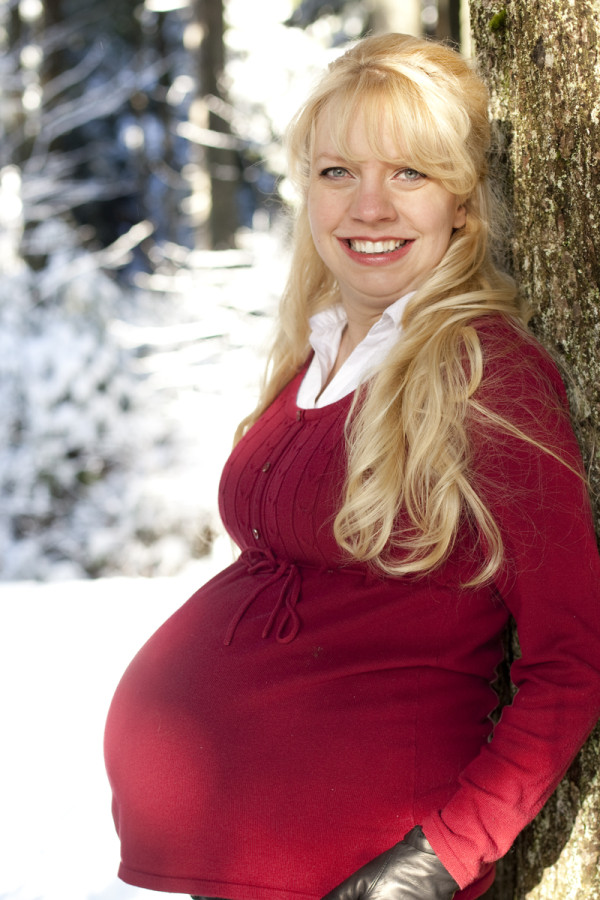 Once our mini suitcase, car kit, and diaper bag was packed, we were ready to make a decision on where to shoot my maternity photos.  The location I had in mind that was certain to be a winter wonderland was over an hour away.  Eric said no way.

Refusing to give up my dream of giant belly in the snow photographs, I suggested Tiger Mountain.  Eric plugged the location into Google Maps and saw it was only about 45 minutes away.  We decided it was a safe distance, and before we left, Eric exchanged joking texts with my doula about sending her photos of amniotic icicles if my water broke. 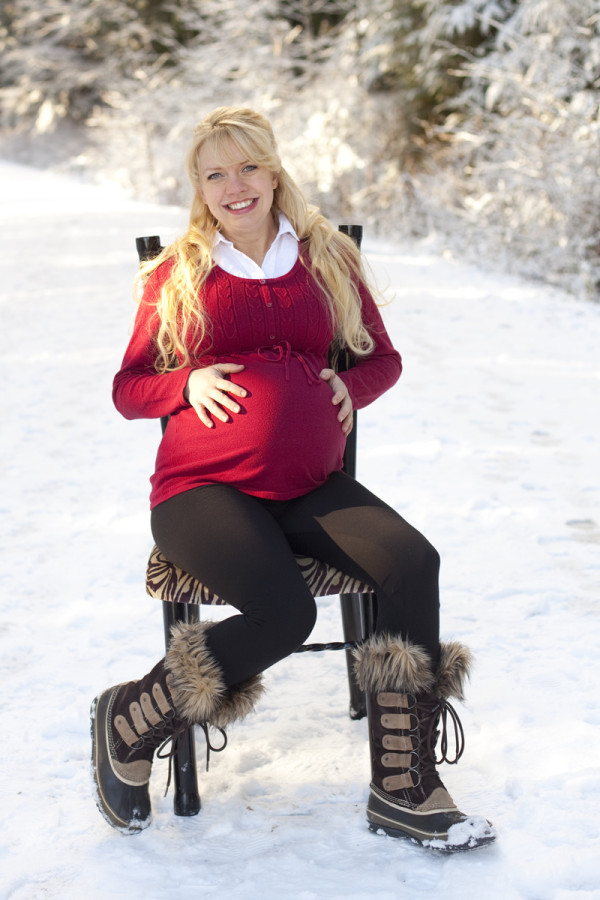 He loaded our birth bags into the car, just in case we had to make a mad dash for the midwife then, feeling sufficiently prepared, we climbed in the car, excited for our mini road trip.

As we drove to the mountain, we bantered back and forth about possibly delivering the baby on the side of the road, as well as discussing serious things like whether we had tied things up at work for the next week, and how to financially handle me taking two months of unpaid leave. 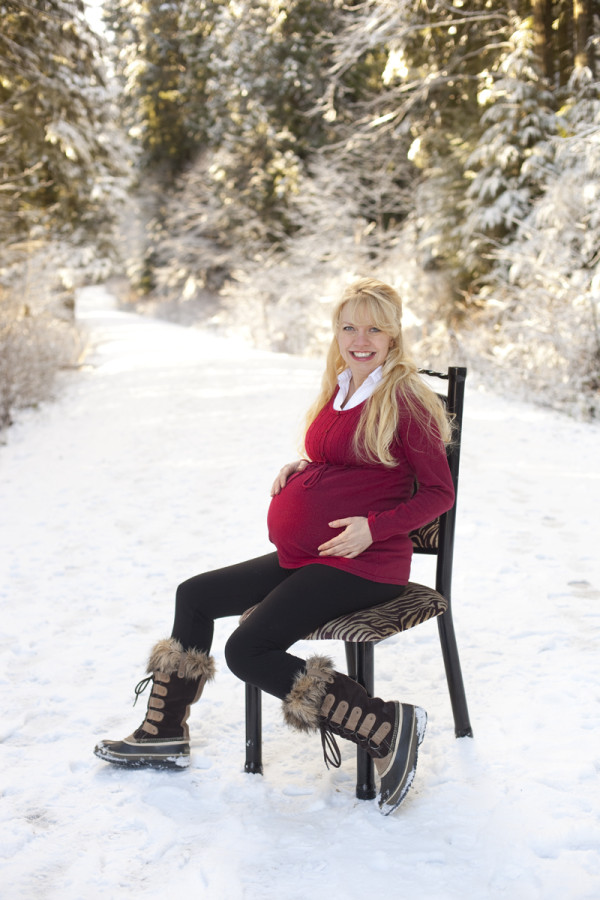 The fake fur lining my boots kept my feet toasty warm as the thick rubber soles crunched through the frozen crust over the parking lot slush.

Suddenly my pregnant belly felt light as could be and I was dancing around with glee, babbling to Eric about how excited I was to be in the snow. While he was shivering in his coat and gloves, I was basking in the warmth of a baby oven, and thrilled with the chill that kept me comfortable instead of my usual ten degrees too hot.  A tank top, leggings, and boots were plenty, and the cold air also reduced swelling which meant my hands actually felt quite a bit better than they had in at least a week. 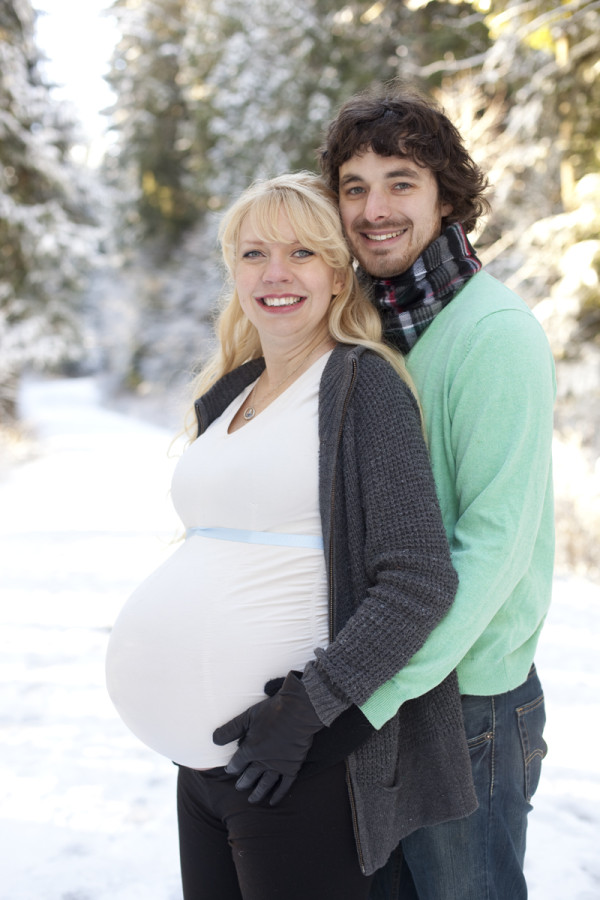 Eric began unpacking the gear: camera and tripod, light reflector, a bag of outfits, and the funky zebra chair that Eric hates but I can’t bear to part with.  We trekked a little ways up the path to an area where we could control the light.

Eric’s arms were full, and yet he still found a way to hold onto me at slippery spots to make sure I didn’t fall.  Considering I was so pregnant that I couldn’t even put pants on standing up without falling over, hiking through the snow was quite a feat.  Yet somehow, it didn’t seem hard at all. I had an energy I hadn’t felt for weeks.

Over the next hour and a half I trekked to and from the car several times to change outfits. I was starting to get a little tired, but my enthusiasm didn’t wane. 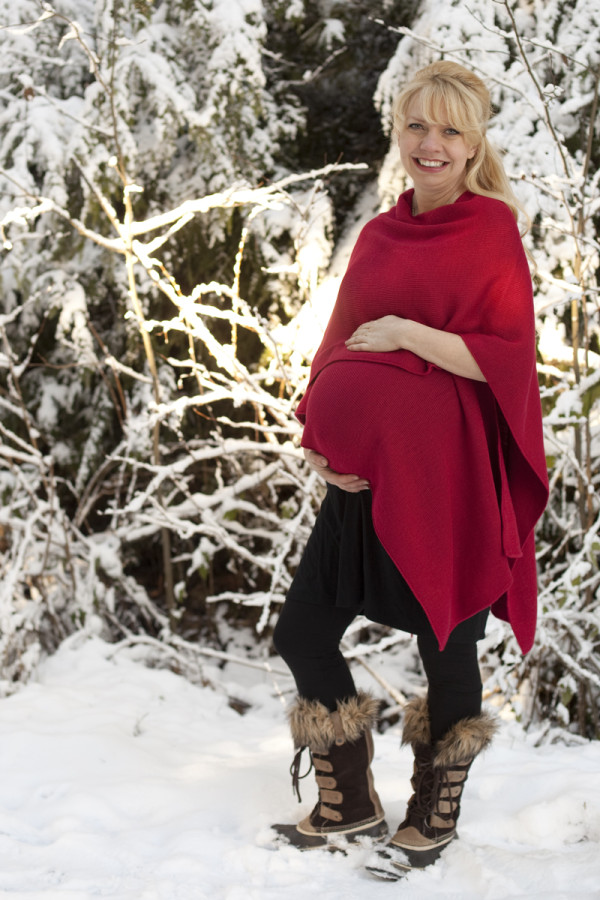 We encountered a few other souls out to enjoy the snow.  A man who looked my grandmother’s age shuffled past us in snowshoes, pausing only to give a concerned look at the baby that he was sure must be ready to fall out into the snow at any moment.  “What on earth are you doing?” he asked.

“We’re taking photos!” I said in a cheerful tone.  The incredulous look he turned on my husband told me that he was really asking why we were crazy enough to be there. 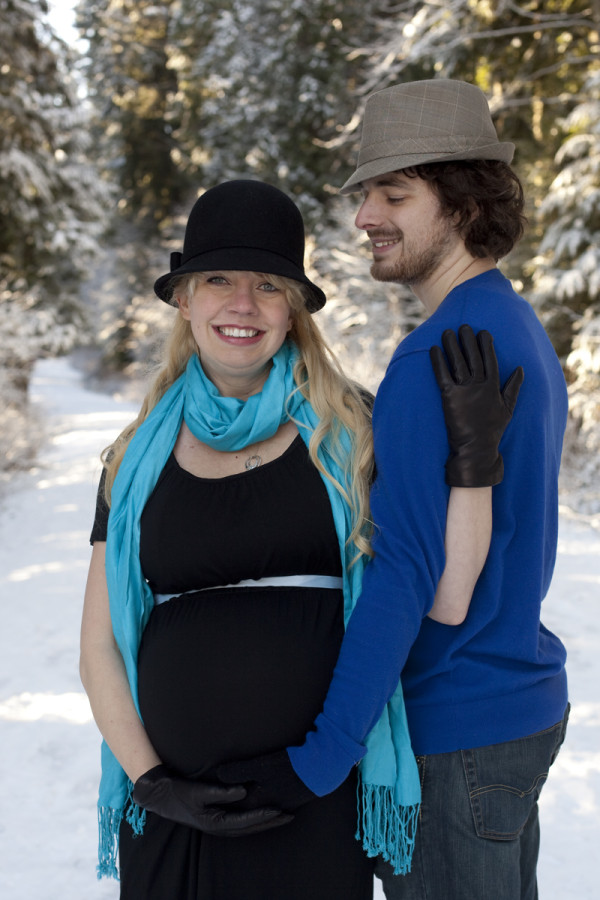 A young mother with two boys, about four and two, waited hesitantly before approaching.  Wanting her boys to have as much fun as possible, we assured her that she didn’t need to worry about getting in our shot.  Once they had the go ahead, the boys eagerly ran past our camera to the promise of even more snow higher up the mountain.  The four year old smiled and returned our hellos.  The two year old, with a grin of pure delight, impulsively swept up two tiny handfuls of snow and tossed them into the air yelling “Yay snow!” then looking to us for approval.  We immediately clapped, caught up in his enthusiasm and gave our own cheer for the fun of snow.

Once I was satisfied that we had more than enough photos, including a couple of Eric with me, we packed up for home, plus a much needed bathroom stop.  While headed to the nearest McDonalds (because for this typically healthy eater, french fries were the pregnancy craving of choice and went hand in hand with bathroom stops), I called my brother on speaker phone so that we could sing happy birthday to him.

My brother Jason is autistic and was turning 25 that day.  When my mom was pregnant with him and had a due date right around my birthday, people often asked if I wanted him to be born on my birthday.  Remembering waiting desperately for my sister to come home after she was born I answered, “No, I want him to come HOME on my birthday.”  Sure enough, he was born the 11th and came home two days later on the 13th, my seventh birthday.  We’d still been birthday buddies though, and every year since moving out I’d call on his birthday and have my parents tell him there was a girl on the phone for him. 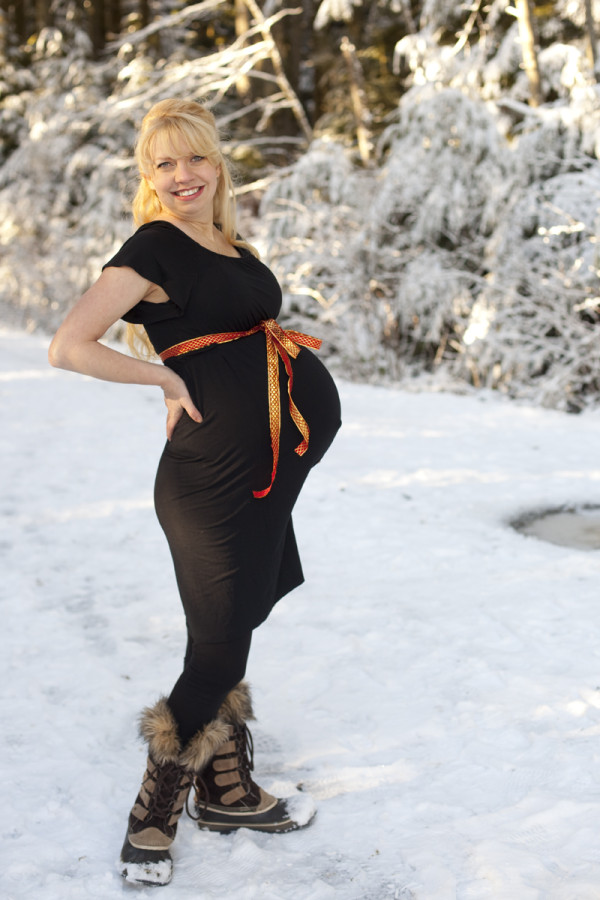 Once Eric and I finished singing (and Jason sang to me in return), my mom got on the phone to make celebration plans.  We were planning to see Monsters Inc 3D the next day, at Jason’s request, then go to a restaurant for dinner.  Unfortunately, Monsters Inc had left the Auburn theater that Friday, and the nearest showing was now an hour away.  My mom pulled out the newspaper (those still exist?) and was offering options at various theaters.

“No mom.”  I said, not even realizing at the time how strongly I felt.  “I don’t want to leave Auburn tomorrow.  We have to see a movie at the Auburn theater.”  We decided on the Hobbit, which Eric and I had already seen but, as uber nerds, were happy to see again.

Once plans were made and settled, my bladder emptied (along with a mucus plug I think but we won’t go into details here!), and my fingers salty from hot but disappointingly limp fries, we went home.  I set up the camera and tripod to take one more photo of my pregnant self, this time making sure clothes didn’t hide or accentuate my bump, but blurry and dark so I could feel a sense of modesty. 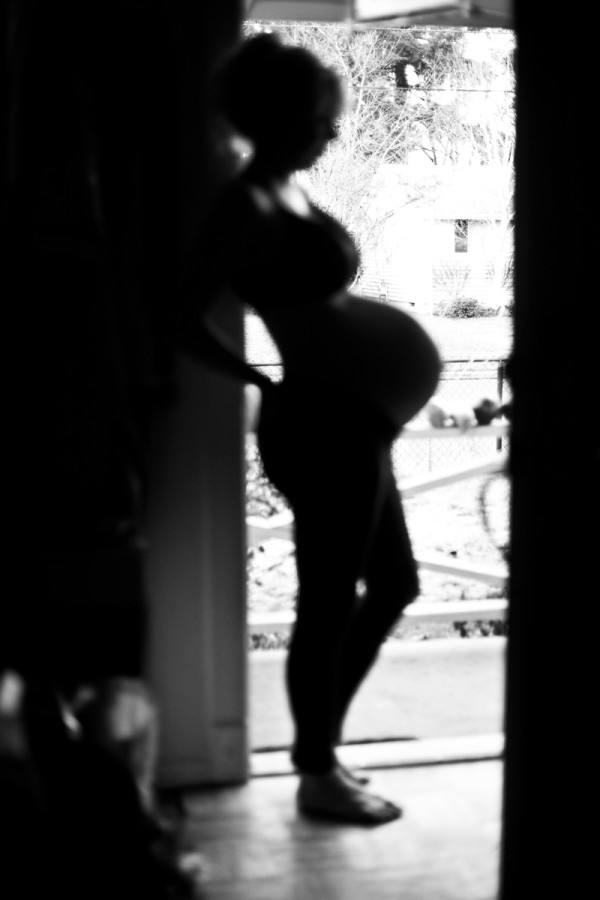 “Awesome!” I told Eric, who was getting our baby name list ready.  “I got all the photos I really wanted, and next Friday I can take a few more when I’m really close to delivering!”

We went over my choices for Hawaiian names and decided Makanaokalani (Gift from Heaven) was the favorite for us both.  Then it was time for a celebratory dinner.

My boss had given me a gift card to a local pub for Christmas, so we used it, knowing we’d be so busy in the next week that we wouldn’t have a chance to go out.  We cuddled and smiled and enjoyed an (alcohol free!) extra special dinner, the last supper before parenthood.

Little did we know that we would become parents the very next day!!! 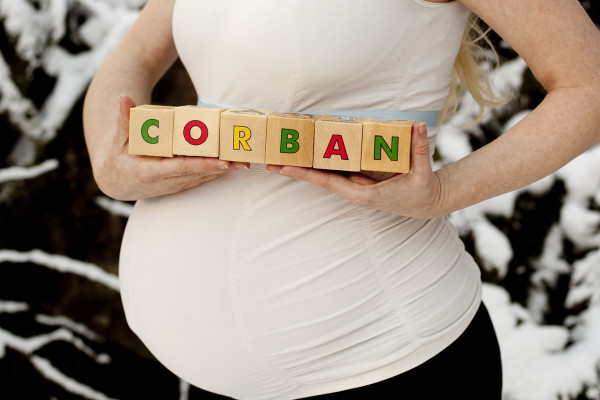