A conversation at the beginning of our marriage:

Diana: What did you think of the spaghetti?
Eric: It was okay.
Diana: Oh what didn’t you like about it?
(I should note at this point that I’m okay if Eric doesn’t like something I cook. He usually tells me it needs more cheese or is to thick or gives me constructive criticism that makes it fun to try and make it again so he likes it)
Eric: I don’t really like red sauce.
Diana: *jaw drops* What do you mean?
Eric: Yeah, I like alfredo-ey stuff but not red sauce.
Diana: But…but… I love red sauce! All my friends in Hawaii love my red sauce! You can use it for spaghetti, or lasagna, or pizza, or chicken parm, or all kinds of things.
Eric: I guess.
Diana: That wasn’t MY red sauce recipe, you have to try MY red sauce recipe!
Eric: Okay
(then he hugged me since I was obviously distressed, and reminded me how much he loves and appreciates my cooking) 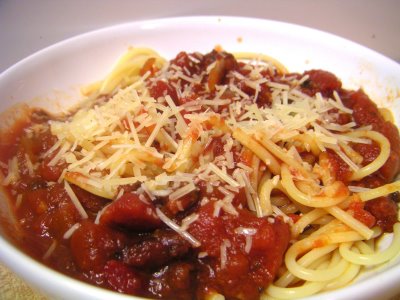 Thus began my quest for creating a red sauce Eric likes. One problem with this was, I always experiment with my sauce and don’t write it down. It’s good every time, but it’s also different every time (Part of why I started blogging my food!). The other problem is, I like to make it in the crockpot and have tons of leftovers to freeze and make different things with. So I’ve only made my red sauce twice since we’ve been married.

The first time was with ground turkey, which is what I typically use. I prefer ground turkey over ground beef typically. Again, Eric said it was okay and proceeded to remind me what a good cook I am and that it’s okay if he doesn’t like red sauce. I would not be deterred.

Then one day, I had a pizza party with my High School Girls’ Bible Study. One of the ingredients I had for them was sausage, and I decided to use the leftovers in some jarred tomato sauce for a fast spaghetti for lunch. Eric wanted to try a bite and exclaimed “This is great!” Once again my jaw dropped, it was sauce from a jar! But then I realized, it must be the sausage. So it was decided, the next time I made my red sauce I’d use sausage.

Success! He liked it, and I’ve used it on pizza, in lasagna, and for spaghetti. Hooray! This means I can only eat it once a week since it now has pork in it (which I’m a little allergic to) but it’s so delicious. This fills my big 5 qt crockpot, if you have a smaller one cut the recipe in half. 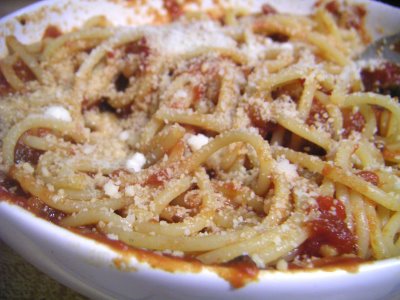 Empty all the cans into your crockpot. Break up the sausage into a large skillet and cook through. Spoon sausage into the crockpot, leaving some drippings in the pan. Fry the bacon slices until cooked and crispy then set aside to cool.

Add a little olive oil to the pan and saute the onion for a few minutes, then add the red pepper and garlic and saute a few minutes more. Dump everything from the pan into the crockpot.

Add sugar, Italian Seasoning, red pepper flakes, and salt and pepper to taste. Cook on low 10-14 hours (It’s done by 10 hours, but I couldn’t get to it for 14 hours). Taste halfway through cooking to determine if it needs more salt or pepper.