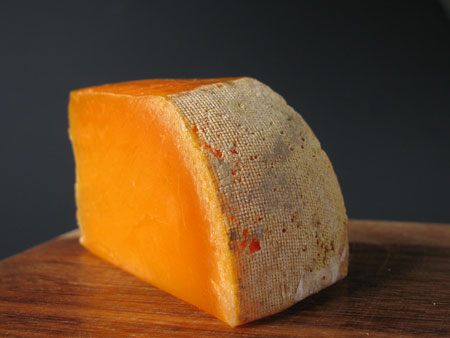 Hello, my name is Diana, and I am obsessed with cheese.  I’ve stood for a full 30 minutes in front of a cheese case, not speaking or touching anything, simply staring at the abundance and variety of amazing cheeses.  I’ve taken a plate full of cheese samples to a corner all by myself so I can savor the nuances of each bite completely without distraction.  My current favorite is a lovely orange cheese called Mimolette, which I got hooked on when my friends Todd and Diane brought it on our trip to Mexico.  But I have to tell you, Mimolette has a dirty little secret. 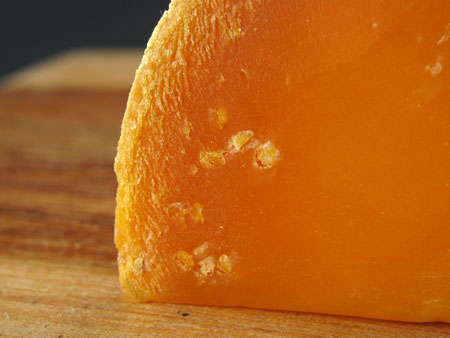 Do you see those little holes near the rind of the cheese?  They’re not air bubbles, they didn’t somehow happen while the wedge of cheese was being cut.  No, nothing that simple or palatable.  They were made by mites, yes that’s right, I’m talking about little creatures, burrowing in the cheese.  If you want to see a picture of cheese mites, well beware!  But the good news is that they’re gone by the time you eat the cheese!

According to several cheese experts I spoke with, the mites are introduced to add flavor to the cheese (which gets its beautiful orange hue from a natural dye called annatto).  Basically, as they burrow through the cheese and devour the rind, they promote air flow and flavor development as the cheese ages.  The mites are gone before the cheese is sold, and you don’t really eat the cheese rind anyway because it’s rock hard! 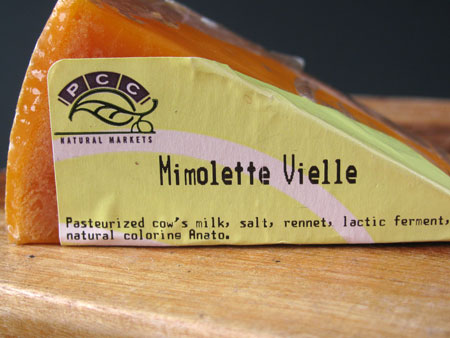 Mimolette typically has three stages, demi-vielle which is “half old” or around six months of aging, vielle which is “old” and about a year aged, and tres-vielle or “very old” at 18 months.  At two years it gets thrown away.  Sad!  As the cheese ages, its flavor profile changes dramatically.  At the demi vielle stage it’s VERY hard (hurt my teeth!) and has an oily quality to it.

The mimolette vielle starts out mild but has a complex after taste.  I had Eric try some right before we went on a walk.  He said,”It’s good, tastes like a mild cheddar or something.  Nothing special.”  Then 3 minutes away from the house he said “Wow!  That cheese has a great aftertaste!”  It has a nutty quality  to it, and sometimes hints of fruit or caramel as well.  I like to gnaw on the inside of the rind where the flavor is the strongest!  I haven’t tried the tres-vielle but hear that it has a much stronger nuttiness. 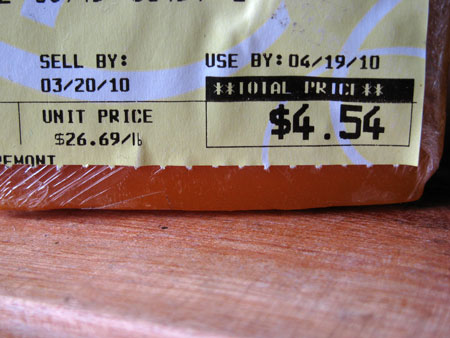 It would be expensive to buy a whole pound (don’t think I haven’t considered it!), but my wedge was under $5.  One of our favorite ways to eat is high quality ingredients used simply.  A wedge of cheese, a loaf of crusty bread with oil and vinegar for dipping, some grapes and apples and we’re good to go!  I highly recommend this for a cheese platter to start a party.  You could grab some brie, and maybe a blue cheese, a couple of baguettes thinly sliced, and some olives to have a starter course for 10 that’s only about $2 a person. 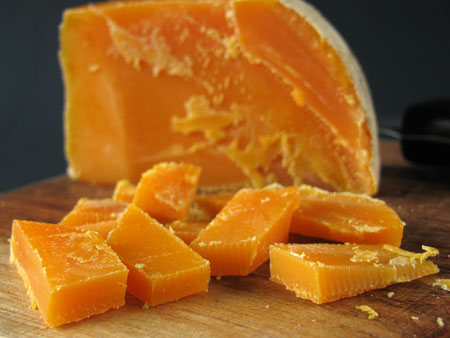 Plus it’s a great way to weed out the timid eaters (and have more for yourself!).  Just wait until everyone’s tried the cheese, tell them about the mites, and see how many people avoid it after that.  Quite a conversation starter!  My plan for my next wedge of Mimolette is to make macaroni and cheese, if I can keep from eating it first 🙂