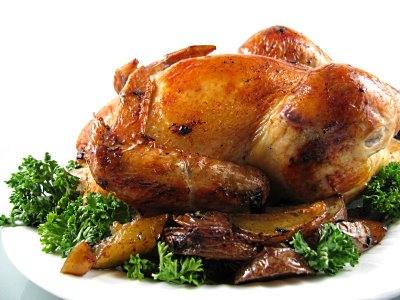 When we bought our first organic chickens, I knew that I had to try roasting the first one like the French do it. I had just finished reading “The Sharper Your Knife the Less You Cry” by Kathleen Flinn, and felt like I too could be a French culinary genius. I’m not sure why I thought that, since I’ve never been to France, learned from a French chef, or taken any cooking classes, but I didn’t care because I was inspired. If you haven’t read Kathleen’s book yet, you have to! I saw her speak at the International Food Blogger’s Conference and was really impressed by her. I don’t usually use the word lovely to describe someone, but that’s the first thought that came to mind. She seemed like one of those people who you really want to know, who come across at first as shy and timid, but then have the guts to step out of their comfort zone and speak up. I was rather enchanted by her and too dorky to say more than “hi” to her when we passed in the bathroom, but I knew I would read her book. 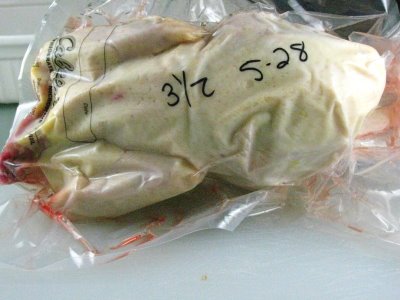 I checked it out from the library and the moment I opened it was transported to a land of food, culture and love. I have French relatives and hope one day they can show me around France, but until that day I live vicariously through experiences of people like Kathleen. Her writing masterfully sweeps you through a variety of emotions; fear, compassion, joy, excitement, sorrow, embarassment, and lots of laughter. Her book is worth reading simply for the story of her husband in a coffee shop with women shouting “Will you go to bed with me!” in French at him. Eric and I spent 5 minutes cracking up after I read that part to him. If you haven’t read it yet, get your hands on a copy. 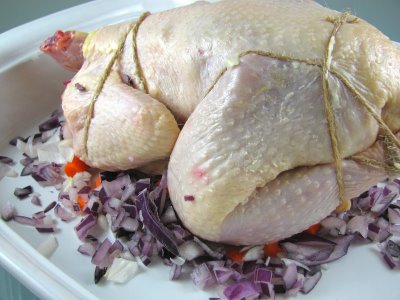 So, feeling inspired and emboldened, I set up a work space on my dining room table, began humming the theme from Les Parapluies de Cherbourg (why do the greatest French movies have such sad endings?) and sat down to read through the recipe. That’s where my trouble began. The first thing to jump out at me was “Truss the chicken”. Truss? I know I’ve heard of that before, isn’t that something to do with tying it up? I began my research and found tons of arguments for and against trussing. My deduction was that if you’re going to be moving the chicken (rotissiere or intermittent rotating) then trussing is a good idea. Then I tried to learn how to truss and quickly discovered that there is no “right” way to truss a chicken. I found instructions, photos and videos of so many different methods that I got frustrated and overwhelmed and shouted out “I can tie up a stupid chicken can’t I?!” Apparently I can’t. Before roasting, my chicken looked like the victim of a deranged serial killer, and after roasting it had lines through the beautiful crispy crust of the drumsticks. But it held together well so I’m not complaining. 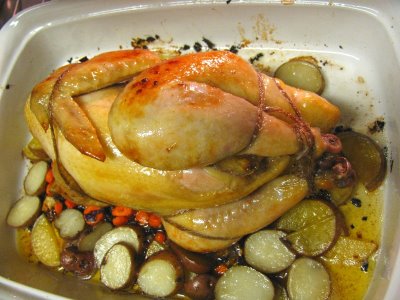 My next difficulty was with the slices of onion. The only onion I had was some finely chopped red onion in a tupperware in my fridge. I decided to go with it, and although they were a little charred by the end, they still tasted great. I also added the last of my potatoes (after cutting off the eyes they were growing!) thinking the drippings from the chicken would cook them nicely. I was right 🙂 It was a little annoying to keep getting up to turn/baste the chicken, since Eric and I were trying to have a serious conversation, but it certainly wasn’t difficult. Once the chicken was done however, I was distracted by talking to Eric and making beans and completely ruined my attempt at the sauce. Fortunately, the chicken didn’t need it. The skin was reddish brown and deliciously crispy, the meat was succulent and juicy, so next time I’ll just spoon some of the drippings with the carrot and onion over it. 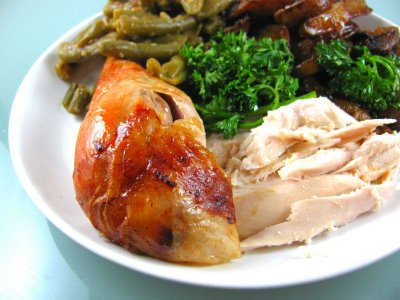 I wanted to make green beans to go with the chicken, but didn’t have fresh ones, so I used a can of beans from the pantry. Some of you may protest that canned beans aren’t as good as fresh, which is true, but they’re cheap and available year round. They actually turned out really delicious. I put the bean recipe first because it’s shorter, but you’ll actually want to wait to make it until your chicken is almost done. The best thing about roasting a whole chicken is how far you can stretch it. We’ve had 3 meals (2 servings each) already and still have over half the meat left, plus the carcass for making stock! If money is tight, I highly recommend getting a whole chicken rather than the frozen bags of chicken breasts. The flavor is way better, and you actually get more for your money. Be on the lookout over the next couple weeks for shredded chicken recipes. This is no longer an “authentic” French roasted chicken, it’s lip smacking good! 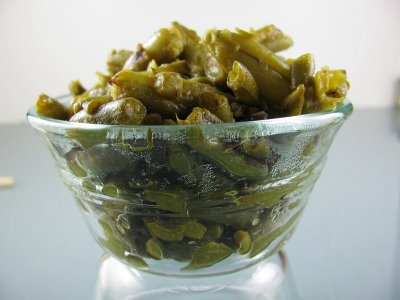 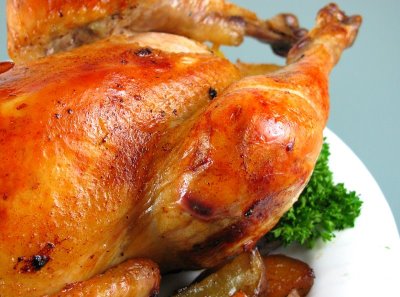 Preheat oven to 425 degrees. Sprinkle the inside of the chicken with the salt and pepper then smear 1 TBS of the butter inside the chicken. Wash chicken in running water and dry with paper towels. Rub on top of and under skin (between skin and meat as much as you can) with the rest of the butter. Truss the chicken and place breast side up in a pan then scatter the veggies around it.

Place in oven and set timer for 5 minutes. Melt butter in a saucepan with the oil and get your basting brush ready. When timer goes off, turn chicken its left side and quickly brush with basting mixture (try to be fast so oven temperature stays high). After another 5 minutes turn chicken to its right side and repeat basting. Let brown another five minutes.

After those 25 minutes, turn chicken breast side up and baste again. Let roast for 7 minutes, baste, then roast a final 8 minutes. Chicken is done when drumsticks move easily in the socket and juices run clear yellow. Remove from oven and let sit on a platter 10 minutes before carving. Use a slotted spoon to scoop vegetables and potatoes and spoon them over the chicken. Garnish with fresh parsley.

Approximate Cost/serving: 1 organic free range chicken was $12.50 for us. We get about 14 individual servings from it used in different dishes, plus the carcass for stock which I’ll call 2 more servings. So although the entire dish costs around $13 to make. Each serving of chicken is about 83 cents.

Gluten Free: Nothing in the recipe contains gluten.