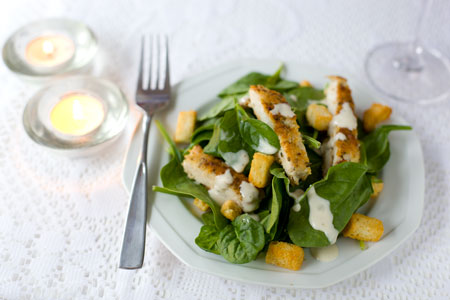 One of our favorite salads ever is at Dave and Buster’s, the arcade for adults.  It’s a chicken caesar salad but what makes it spectacular is the crispy parmesan crust on the chicken.  While I won’t claim any similarity to the Dave and Buster’s chicken caesar salad, after a few years of experimenting I’ve come up with a parmesan crusted chicken recipe that leaves us equally satisfied.

When Dave and Buster’s opened in Hawaii, my friends and I quickly claimed it as our after work hang out.  We worked our way through their menu, eating there once a week before battling each other at various games.  Each of us eventually settled on our favorite menu item and mine was definitely the parmesan crusted chicken caesar salad. 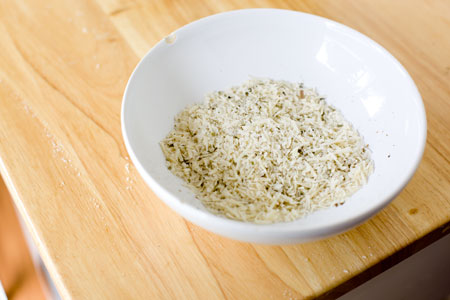 Eric came out to Hawaii once while I was still living there.  He was in town for a friend’s graduation but needed a place to stay and a tour guide for when his friend was unavailable.  I found a couple guy friends for him to stay with and played tour guide or let him borrow my car when I was working.  We were still clueless at this point that we would end up dating, let alone marrying each other!

One of the many firsts I introduced him to was Dave and Buster’s because there aren’t any in Washington.  It turned out he loves chicken caesar salad as much as I do, so he was excited to try one that I so highly recommended.  A new standard was born in his mind, and once we got married I started a quest to perfect my own parmesan crusted chicken.

When I first started DianasaurDishes.com, it was because I wasn’t using recipes so couldn’t make things over again.  This was actually the first recipe I wrote down on my personal blog because I wanted to make sure I remembered it. 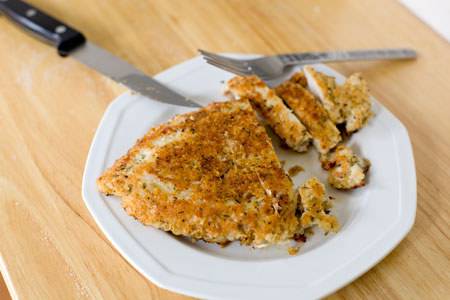 In getting ready for a site redesign and working harder to make sure posts match the focus of the blog, I’ve been going through my old recipes that I posted back before I knew anyone was reading them.  I’m retesting them, rephotographing them, and sharing the story behind the recipe.  This is the first of many revisited posts and I’m excited that doing so will make this website an even better resource.

Now for the chicken.  I’m not calling this a chicken caesar salad recipe, because I haven’t come up with my own caesar dressing yet.  I really like Brianna’s or if I can’t get that I like Girard’s which comes in a cool triangle bottle that makes a great bud vase.  It’s also important to realize that you’re not limited to using this chicken in salad.  It’s also amazing over spaghetti with a simple red sauce, or tossed in fettuccine with a garlic cream sauce. 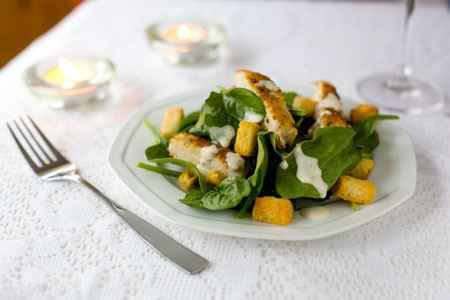 Make sure to pound the chicken breast to an even thickness.  This will prevent any of it being over or under cooked.  I usually make it about 1/2 inch thick.  I used panko breadcrumbs to make the breading because it gives such a nice crispy texture.  Panko is a Japanese style of breadcrumb that uses crustless bread, so whatever you use it for is lighter and airier than it would be with regular breadcrumbs.

To get the coating to stick, I used an egg yolk.  You can use a whole egg, but I had some leftover yolks and found that using a yolk without the white actually adheres better to the chicken breast and means I don’t have to coat it in flour first.  I did not use salt and pepper this time because the parmesan cheese was pretty salty and our salad dressing has lots of pepper.  You should taste yours and season according to your tastes.

We’ll be having this crusty parmesan chicken on casesar salad with some truffle pasta for our romantic Valentine’s dinner.   Do you cook for Valentine’s Day or go out? 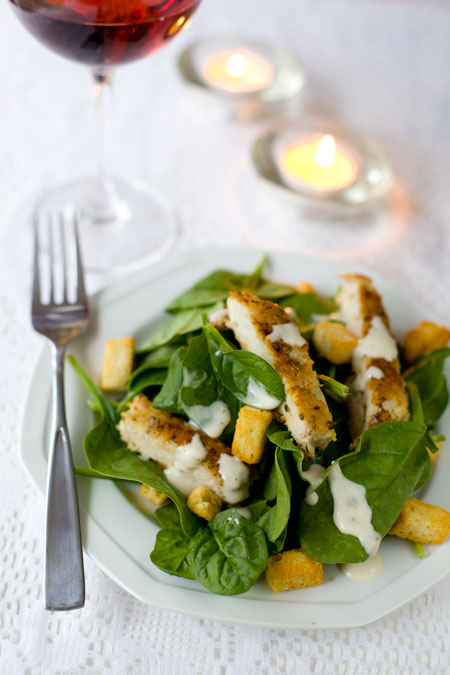 Place the chicken breast in a zip top plastic bag and seal well, releasing as much air as possible.  Pound the chicken breast to 1/2 inch thickness with the flat side of a meat cleaver (or use a rolling pin!).
Mix together parmesan, panko and Italian seasoning.  Place the egg yolk in the bag with the chicken and squish it around to coat the chicken breast.  Press the chicken into the breading on both sides until evenly coated.
Heat canola oil in a non-stick skillet on medium high.  When a bread crumb dropped in the oil sizzles, place the chicken breast in the oil.  Fry the chicken for 4-5 minutes on each side, using tongs to flip, until the internal temperature is 165 degrees.
Remove the chicken and let sit 2 minutes before slicing.  Season as desired with salt and pepper.
Approximate cost/serving:  My chicken breast only came out to 80 cents (I buy them in bulk about 15-20 at a time and freeze them in sets of two).  The cost of one parmesan crusted chicken breast is about $1 so 50 cents per serving.
Gluten Free: You can buy gluten free panko or make your own panko style bread crumbs by crushing up rice Chex.