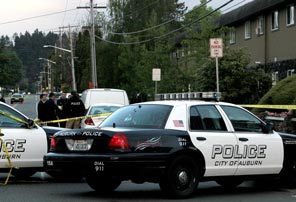 I’m sick right now.  No not with the flu or a cold, not an illness.  I’m sick with sadness, worry and anger.  Yesterday, three people were shot less than a block from our house.  There were children playing right across the street, there were children there!  A birthday party turned into a bloodbath and apparently it was all over two teenage guys wanting the same girl.  We heard the shots, the first few like hammer blows were unsurprising as lots of people were out working on their homes or yards.  But when we heard the rapid sound of firecrackers, Eric and I looked at each other with sinking hearts and said “It sounded like someone just unloaded a full clip, maybe those were gunshots before.”I’m not a looky loo, if I think I can help with a situation I will, otherwise I stay out of it.  But I felt like we were supposed to go find out what was happening.  This is OUR neighborhood.  We plan to raise kids here one day.  Our exchange students walk to and from the bus stop every day.  Eric and I go for walks to explore and get exercise.  This is our HOME, we have to be aware of what’s going on.

This wasn’t the first shooting near us.  Two weekends ago just blocks away, a young Samoan man was killed and his brother severely wounded.  At first I feared the shots I heard might be a retaliation.  I suppose it’s better that it wasn’t, but so frightening that in such a short time, yet another teenage boy would decide to solve his problems with a gun.

Where do 16 year old kids get guns?  Why do they think it can solve their problems?

As I mingled with the crowd, my neighbors I suppose, I heard remarks like “This won’t end unless we all get guns” and “This is the kind of neighborhood we live in, there’s nothing we can do.”  We talked to people who were grieving, offered to pray with people, handed out tissues.  Then we spotted the sister of Eric’s best friend, we hadn’t seen her in years, and the circumstances were not the best to reunite.  When she ran outside to check on their youngest brother, she came face to face with the gunman.

Thank the Lord he decided not to shoot her.

Eric and I have talked about moving, we’ve talked about buying a gun and learning to use it, just in case.  Two things we never thought we’d seriously consider.  While the safety of our family is all important, we also know we are loved by and serve an all powerful God who keeps us under His protective care.

We also don’t believe in running away from problems.  If everyone leaves a neighborhood because crime is getting bad, the criminals win.  We are firm believers in neighborhood block watches and have already started getting our street on board with National Night Out.

But even if we keep our little street safe and crime free, what about the neighborhood?  I’m not ashamed to say we live in the poorer part of town.  It’s the only place we could afford a house!  How can we help these kids whose parents are working 16 hour days, struggling to put food on the table.  We’ve been talking a lot at work about engaging kids who are 5th-8th grade before they get involved in gangs and drugs.  We’ve shared a lot of ideas, but after last night, this has become our number one priority.

I’m a little scared to put this on the blog because I’ve been getting (and deleting) a lot of mean spirited comments lately.  But I’d really love some constructive input and I always want to hear from you, my wonderful readers.

It’s easy to complain about crime, poverty and children with uninvolved parents (NOTE: I’m not saying the parents in any of these shootings were uninvolved, I don’t know them, just a reflection of this area in general).  But what can we do about it?  How can we help the down trodden and brokenhearted?  How can we inspire kids to make a difference instead of destroying lives?  How can we create a positive attitude in the midst of so much hurt?

I know one day I’ll be able to think about this positively, right now I just feel so heavy and burdened, so I’m asking for your help, your ideas.  I hope to be able to get back to posting about fun things like food in a couple days.  Until then, what would you do to make a difference?

23 thoughts on “Reflecting on Tragedy”