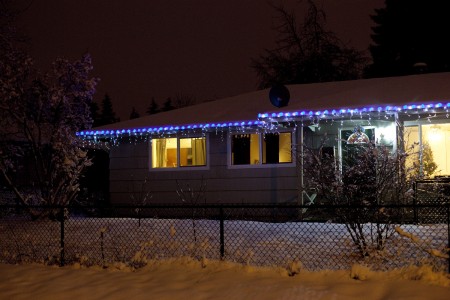 It’s been crazy people.  If you live somewhere that gets a lot of snow, you’re probably laughing at all the news coverage of the snow and ice storm in Washington.  But for those of us who aren’t used to it (and especially for this Hawaii girl), it’s been quite the adventure.

The snow started last Sunday with a light sprinkling, only an inch or so.  It was Phurba’s first time seeing snow and he was very curious. 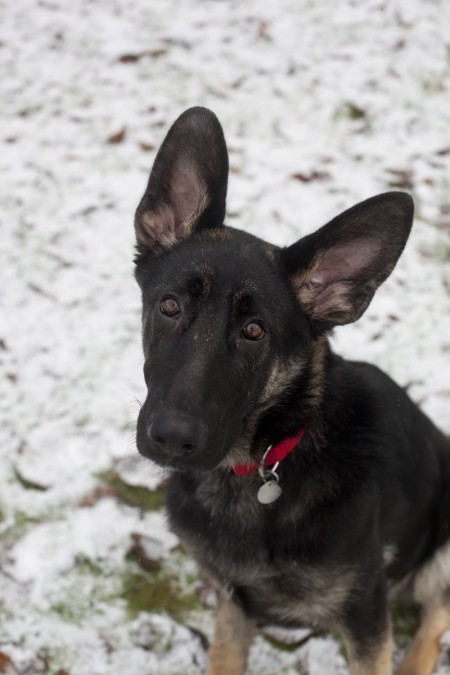 Once he figured out it was pretty fun (and edible)… 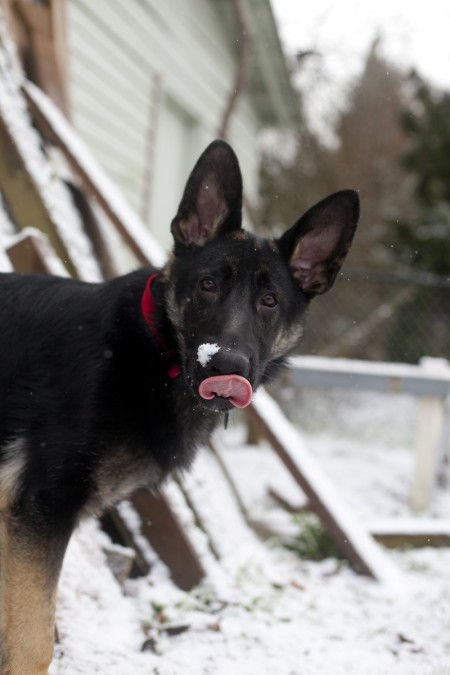 …he tore all over the place, jumping around like a giant black bunny who’d overdosed on caffeine. 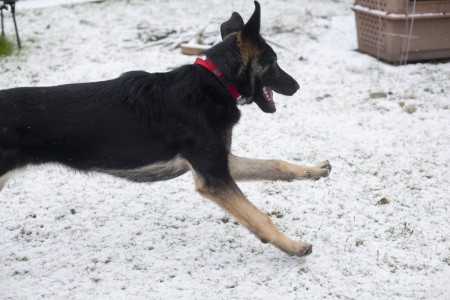 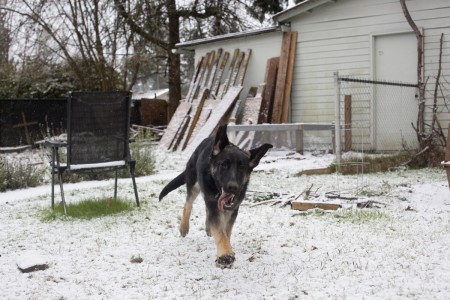 He decided it was pretty cool.  Yes, I’m punny I know.  I blame it on my father.  And my husband.  And his father! 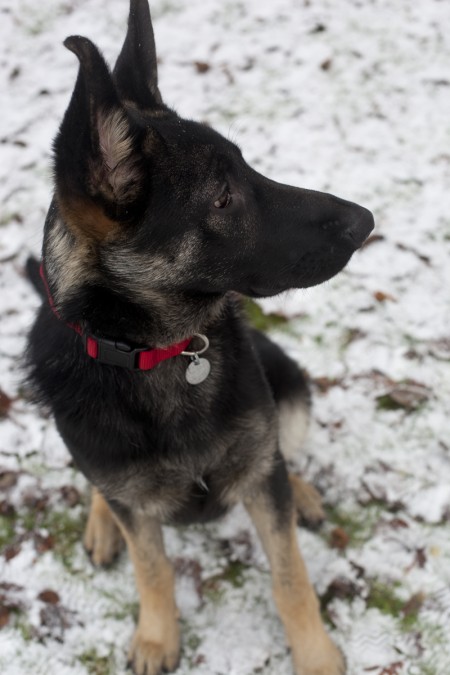 In this photo I was telling Phurba about the chickens we hope to get in the spring if I can ever get the coop built (that weird structure behind him is the coop’s base).  I like to think that he was asking “Will they be this big mommy?” 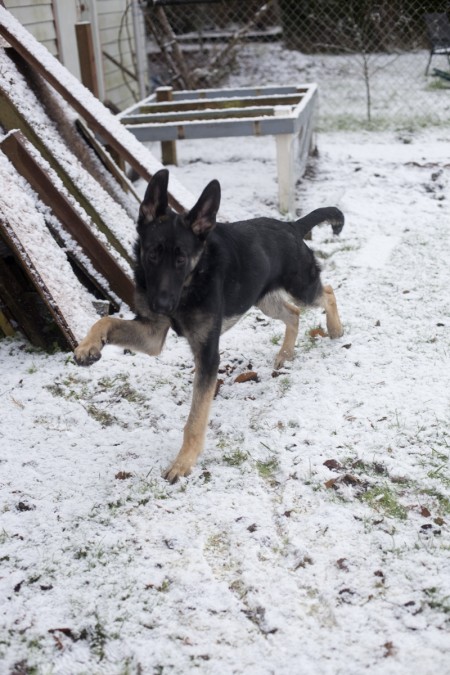 Even though it was such a light dusting of snow, it didn’t really melt.  Instead we awoke on Wednesday morning to a sparkling five inch blanket of snow with more featherlight flakes falling steadily.  I immediately took Phurba outside to enjoy some deeper snow and I think he was a little freaked out at first. 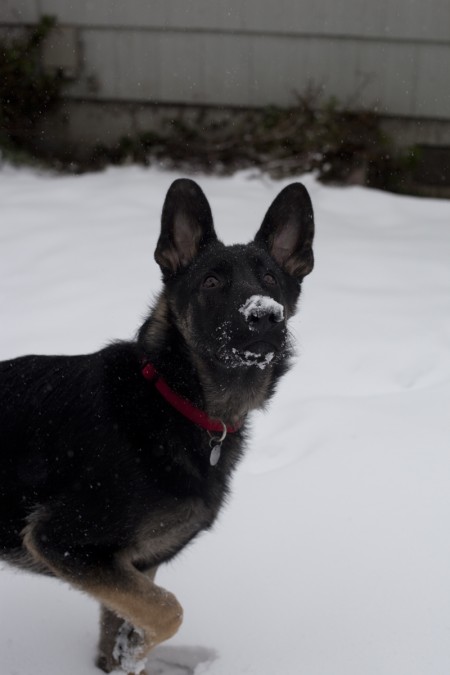 But he quickly figured out it snow was even more fun when there was more of it and his obvious delight was addicting. 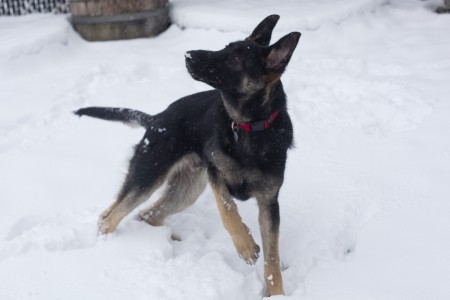 He even managed to learn how to catch snowflakes on his tongue. 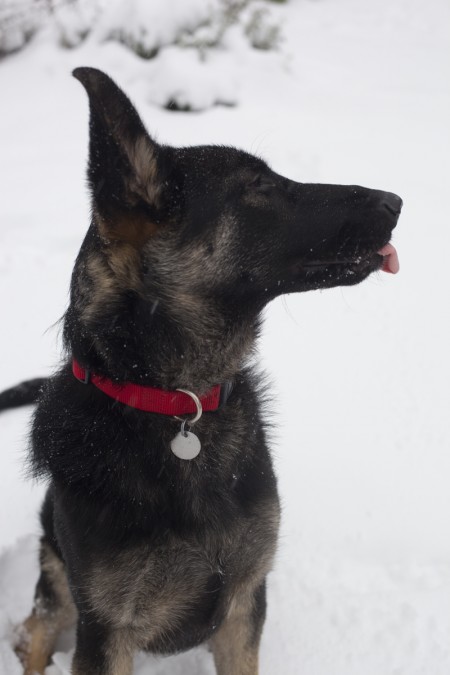 Then I started a snowball fight! 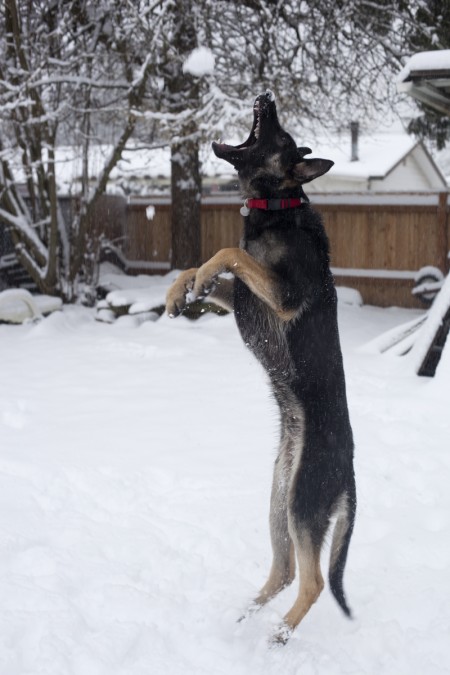 I’d scoop up an icy handful of snow and Phurba would obediently sit, his haunches barely hovering above the ground in eager anticipation of the fun he knew was only seconds away. 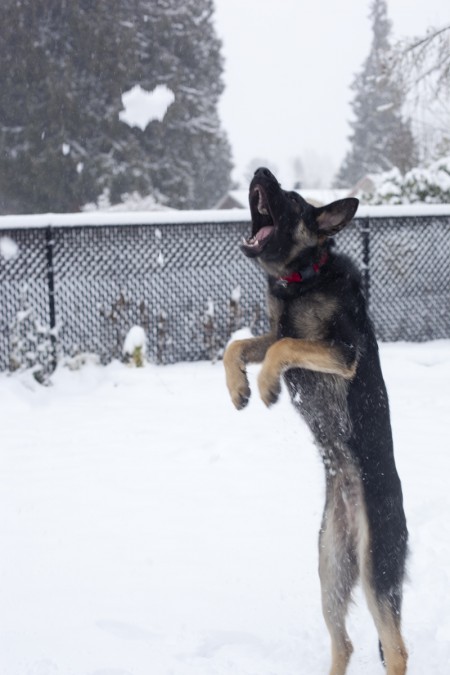 When I was certain he was focused on me (an important part of his obedience training), I’d toss the snow into the air then whip up my camera (or iPhone) to catch his daring leaps of agility. 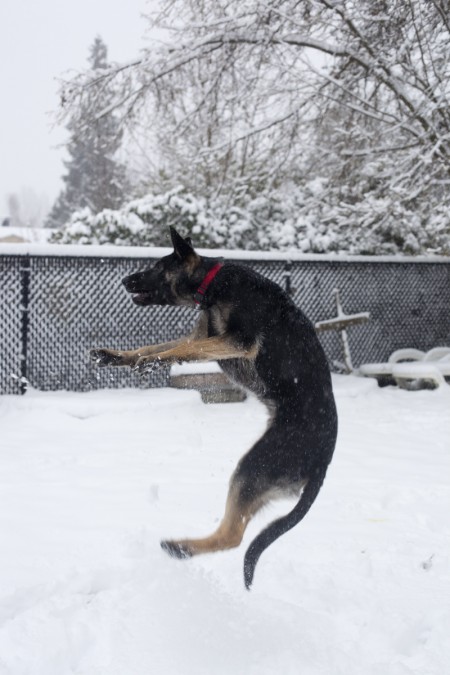 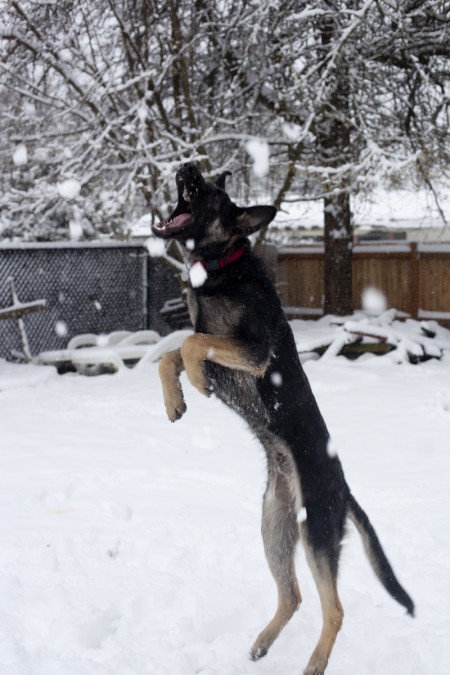 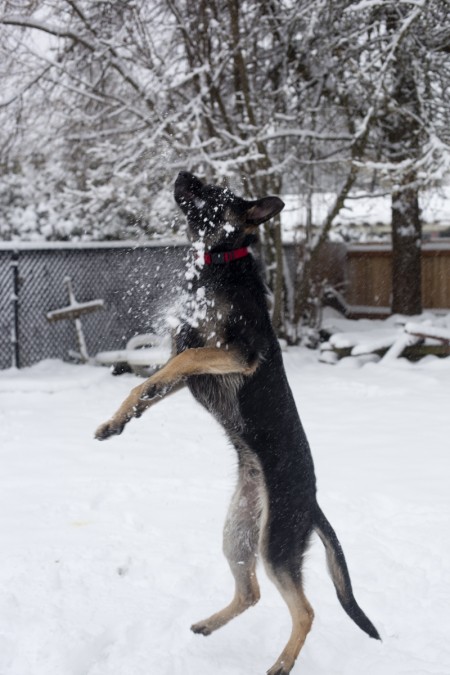 Although the photos from our 5D are better quality, I absolutely love the one that I took on my phone.  It’s a kangaroo puppy! 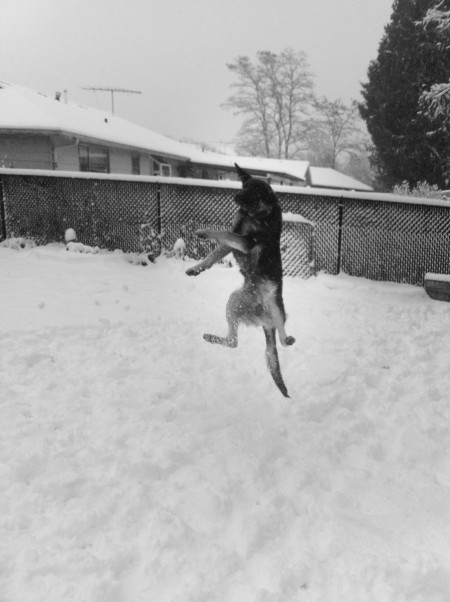 Eventually he was worn out and ready to go inside for a nap.  The first day of our storm was definitely a fun one. 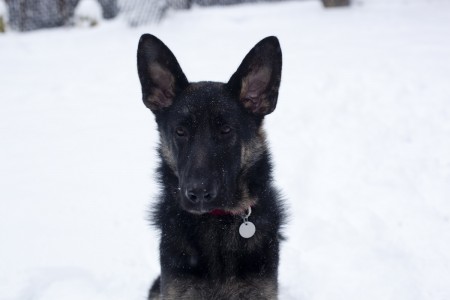 Thousands of homes lost power on Wednesday and we counted ourselves quite fortunate to still be warm and have our variety of digital devices.  Eric and I both worked from home on Wednesday and Thursday and felt it was a nice vacation from the office.

Then at midnight on Thursday (or technically Friday), I woke up suddenly because I couldn’t breathe.  No it wasn’t a gas leak or anything scary like that.  I was diagnosed two weeks ago with sleep apnea and have just started using a machine to help me breathe at night (more on that later).  When the power went out, my air supply got cut off and it felt a bit like waking up drowning.  We bundled up and went back to sleep.

Friday morning it was freezing so we decided to walk Phurba to the church (which had power) and make breakfast there.  It’s about a mile away but it took us three times as long as it usually does because EVERYTHING was encased in an inch of ice. 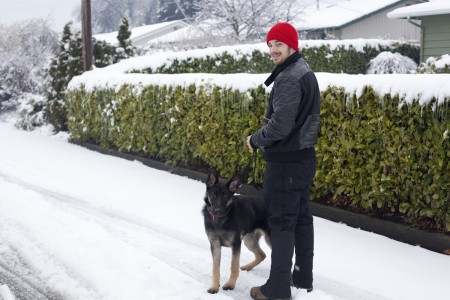 The roads and sidewalks were icy but not too difficult to navigate.  The difficult part was that there were trees and large branches all over the place.

In addition to that, it was finally warm enough for the ice to start melting, so it was falling in giant, sharp chunks and spears from every tree, lamppost, and electrical wire. 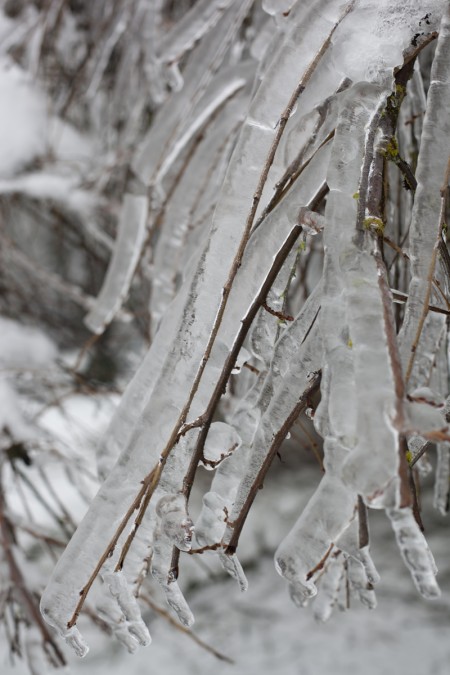 We didn’t want to walk in the street because several cars would spin out unexpectedly in icy spots, but it also wasn’t safe to be under trees, so it was a bit of an obstacle course that Phurba found absolutely fascinating.

Finally we made it and were able to join a couple other church staff families (who had the same bright idea) in pancakes and bacon.  On the way home we circled our neighborhood to clear trees out of the road and clear out storm drains so that melting snow and ice wouldn’t flood the area.

Saturday we were able to clear the ice off of our vehicle that has 4 wheel drive and took the boys and Phurba with us to the church.  I made SPAM eggs and rice with enough to share for the church facilities crew working furiously on plowing and shoveling the parking lot (They in turn got Subway sandwiches for lunch and generously shared with us!).  We all got our computers and phones charged and paid some online bills. 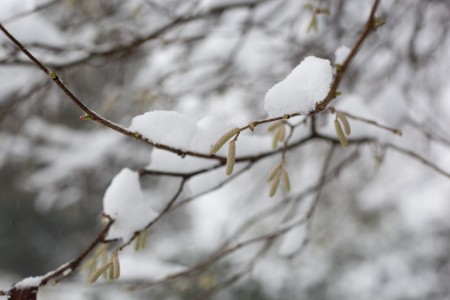 Since we live in the downtown area, we thought our power would be restored shortly.  Unfortunately, although the area around us has power, we are one of two streets that are still completely powerless.

Lest you think I’m complaining, I definitely know how blessed we are.  We’re safe.  Although we’re cold, and have lost several of our favorite fruit trees, our house and vehicles aren’t damaged.  Several of our neighbors have had trees fall close enough to the house to take out the gutter but not damage the roof or windows. 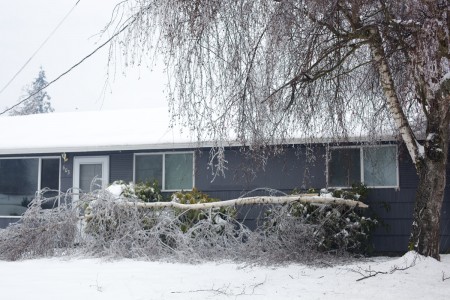 We also saw a lot of cars that slid silently out of their steep driveways during the night. 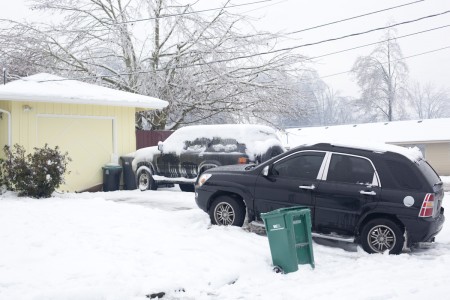 But no one in our neighborhood was hurt.  We checked on our elderly and disabled neighbors to make sure they were doing alright, and found them stoking wood burning stoves and gathering together to spend time talking and relaxing.

Our power will back on tonight, so although I didn’t get any sleep the last few nights in our 45 degree bedroom, tonight I’ll be able to use my c-pap and the heating pad for my ruptured ear drum (yes it’s been a rough month).

I’m thankful for the Puget Sound Energy crews, City work crews and emergency responders who have been working furiously for the past several days to ensure the safety and comfort of the hundreds of thousands of people in Washington affected by the storm.  You’re all amazing and deeply appreciated. 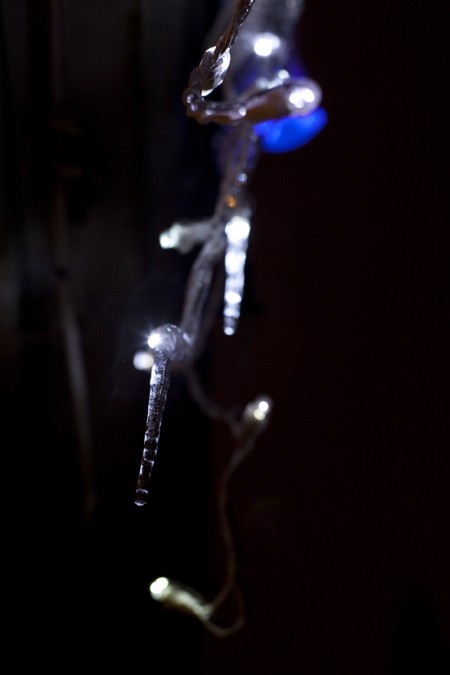 I’m also thankful for our friends and church family who so generously offered up their homes, showers, generators, blankets, food.  We never once felt like we were truly in any need and feel certain that if we ever were, you’d take care of us.  Wow, I’m feeling the love today!!!