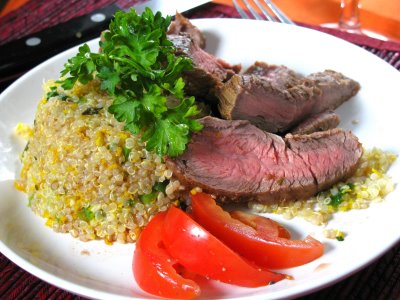 Have you heard of quinoa? Maybe a bit of pronunciation will help. The correct way to say it is Keen-Wah, even knowing that I still often pronounce it as it’s spelled. Now what is quinoa? According to my research, it is a South American psuedocereal, meaning it’s used like a cereal but isn’t a grass plant. The Incas considered it sacred calling it the “Mother of all grains”. It is an unusually complete protein source and great source of fiber, one small serving (1/4 cup uncooked) has 6 grams of protein and 3 grams of fiber, along with several other nutrients. It’s also gluten free. (Just for the record, I’m not being silly, the vegetarian tag on this post is for the quinoa, not the steak!) 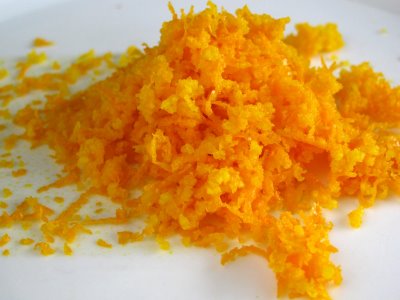 I’d been wanting to try quinoa for a while and finally bought some from the bulk food section last week. I’ve looked at lots of different recipes and decided the first one I’d try would be this one which Serious Eats featured from Ten: All the Foods We Love and 10 Recipes for Each. I love chimichurri sauce and have made several versions of it with steak and as a dipping sauce for bread. I’ve never put orange zest in it so thought that’d be fun to try. I decided I’d stick with the South American theme and serve it with steak but wanted to simply marinade the steak rather than make a sauce for it. I researched some South American seasonings and came up with the recipe below. 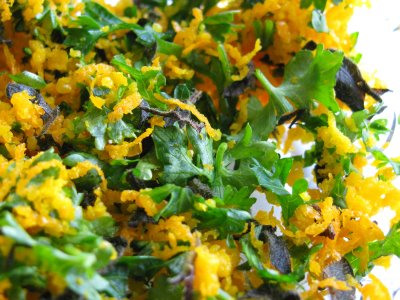 First of all, the steak was amazing! I like mine pretty pink, so just grill a little longer if you want it more well done. Unfortunately I can’t give the best review for the quinoa recipe because I forgot to mix in the oil and vinegar or top with scallions! I thought the orange zest was a bit overpowering and would definitely use less next time. I added some flavor after it was plated by pouring the juices from the steak over it. Next time I will add the vinegar and maybe just a drizzle of olive oil. But the steak, mmmmm, definitely making that again. I will try this quinoa recipe again, the right way, but I think my next quinoa experiment will involve feta. 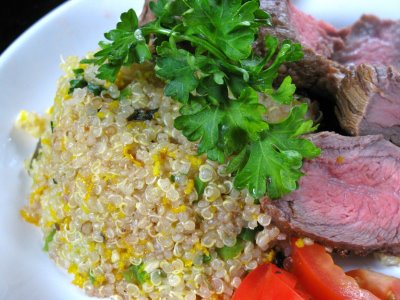 Mix all ingredients except the steak in a tupperware. Place steak in marinade, seal and refrigerate at least four hours. Remove from fridge 30 minutes before cooking. Grill (I use George Foreman’s) about 5 minutes. Let sit on a plate tented with foil to keep in heat for five minutes (this is to keep it juicy). Slice across the grain and serve over chimichurri quinoa.

Combine the quinoa and 1 cup water in a small saucepan and bring to a boil. Reduce the heat to a simmer, cover the pan, and cook until the liquid has been absorbed, 10 to 15 minutes. The grains should be soft and translucent, with the germ ring visible along the outside edge of each grain. Transfer the quinoa to a bowl.

Whisk the oil and vinegar together, and toss with the quinoa while it is still warm. Add the parsley, oregano, jalapeño, garlic, orange zest, and salt and pepper. Toss, using a fork to keep the grains fluffy. Sprinkle the scallions over the top, and serve at room temperature.

P.S. Thank you all so much for your wonderful comments to Jason! He is so excited and has three more mustard recipes that he’d like to share with you. Guess I’m starting a cooking with Jason video series!