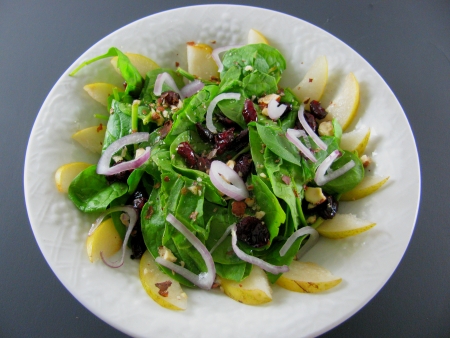 Right now, I’m heading to San Francisco for the Foodbuzz Food Blogger Festival.  But I made sure to schedule a post for you so you won’t miss me too much! I got a free cookbook in the mail the other day, it’s called “The New Thanksgiving Table”, by Diane Morgan (yes, free cookbooks are a great perk of being a food blogger!).  As I flipped through the pages, I was impressed with the array of salads, sides, appetizers, turkey ideas and desserts.  In the salad section, I saw one that I had almost all the ingredients for!  I used Asian pears rather than Bosc, and shallots instead of red onion.  I also changed the serving to be for just two of us, though made the full amount of dressing for future uses.  We loved the salad, except the dressing was a little too salty, so that’s adjusted in my recipe below.  I liked two techniques Diane uses that I hadn’t done before.  One was soaking the red onion (or shallots) in cold water for 30 minutes to crisp them and take away the raw onion taste.  The other was to soak the dried cranberries in the dressing to soften them.    The recipe is at the end of the post, but first I wanted to share the latest Foodportunity with you! 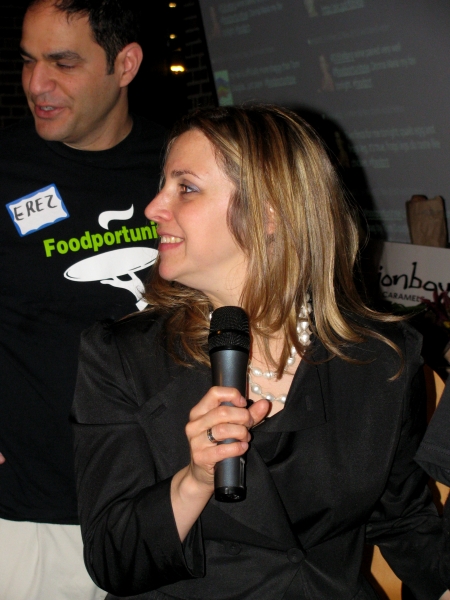 Keren Brown (aka The Frantic Foodie) did a great job putting together the second Foodportunity.  The variety of restaurants and products represented was awesome, and the prizes and panel were fantastic! 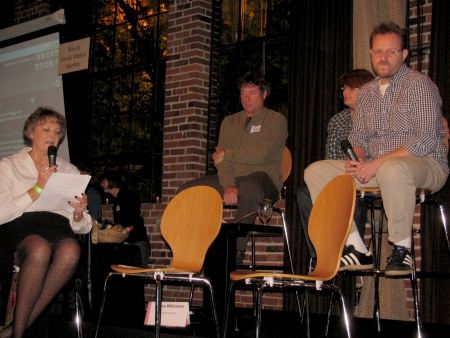 Ethan Stowell (with four restaurants— How to Cook a Wolf , Anchovies & Olives, Tavolata and Union) 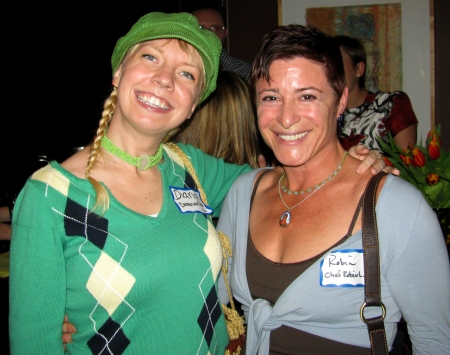 So one of the highlights of the night for me was definitely to finally meet Chef Robin Leventhal in person.  Most of you know her from Top Chef.  I’ve heard of her since moving to Washington as the rock star chef of Crave a former hot spot in Seattle.  She was really sweet and I’m so hoping she wins! 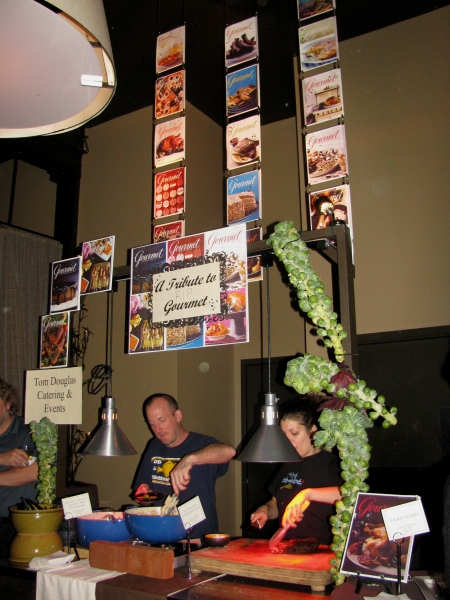 Tom Douglas Catering did a fantastic tribute to Gourmet magazine.  The beef was so tender and seasoned to perfection, but the best item they served… 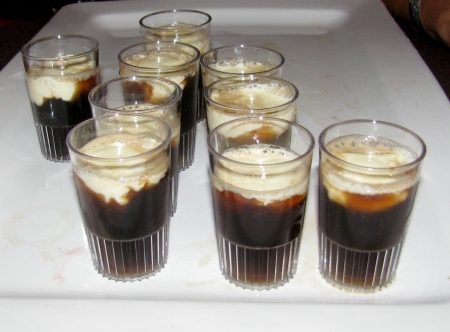 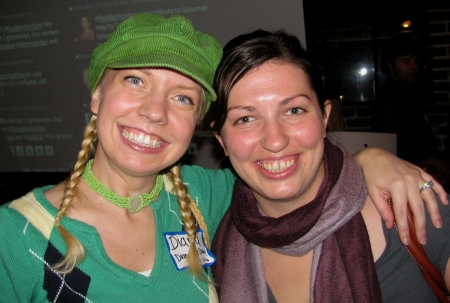 This is definitely one of those events where you realize just how many people you know, as I was introducing people to Eric every couple minutes, and how many you don’t know, as there were people being introduced to me left and right as well.  Here’s my friend Naomi who you may remember from our Foodbuzz dinner at Springhill. 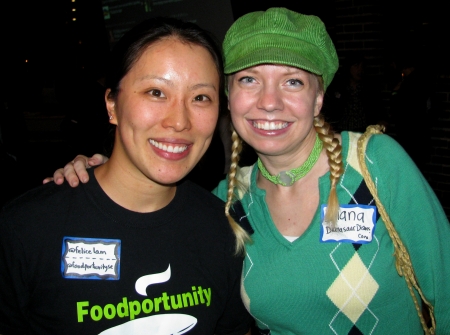 My friend Felice was running the Twitter feed for Foodportunity.  She did a great job tweeting things out and running the twitter contests, which Eric and I both won!  Unfortunately, someone took my gift certificate to Rover’s which I was so excited to try.  I got one for cupcakes instead, which is still cool, but Eric and I don’t eat cupcakes! 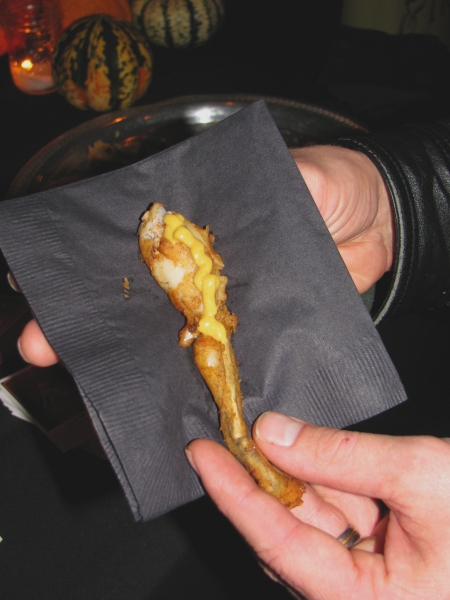 There were a few exotic food items there like head cheese and these little frog legs.  As Eric said, they taste a little like chicken with a hint of seafood.  My favorite dish was definitely the steak tartare, and we also loved the sweet corn potstickers by Huiyona. 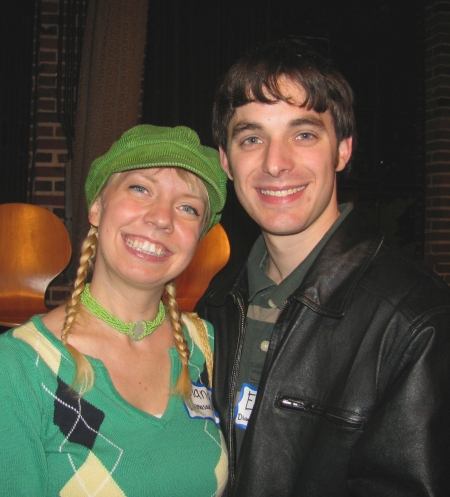 Eric and I had a great time and tons of great food.  Poor Eric was definitely tired by the end of the evening though!  Now I’m off in beautiful San Francisco, and will have tons of stories and pictures for you soon!  For now, enjoy this lovely salad. 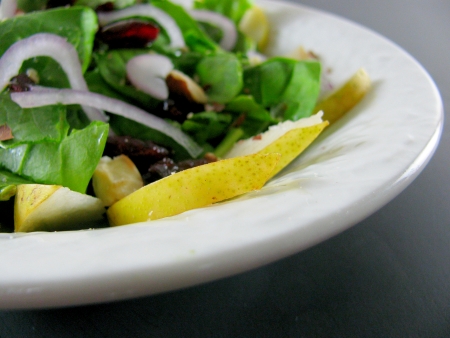 Combine all the dressing ingredients in a jar with a tight fitting lid.  Cover tightly and shake to blend.  Taste and adjust as desired, set aside in the fridge.

Place the shallot in a medium bowl and cover with cold water.  Let stand for 30 minutes.  Drain well and pat dry on paper towels.

In a small bowl, toss the cranberries with 2 TBS of the dressing.  Set aside at least 20 minutes until ready to serve the salad.

Place spinach, shallots and pear in a large bowl.  Shake the dressing and pour a couple TBS over the salad.  Toss to coat evenly.  Divide into two portions and sprinkle cranberries and hazelnuts over the top.  Serve immediately.

Approximate cost/serving: This isn’t too expensive if you get your ingredients in the right way.  We get cranberries from bulk bins, spinach in bulk at Sam’s Club and Asian pears from a local farm for $1 a pound.  So the whole salad cost only $1.60 to make or 80 cents a serving.

Vegetarian/Gluten Free: yes on both