As the end of December approaches, Eric and I have been reflecting on the experiences that have made up the year 2015 for our family. There’s been the wonderful and life changing experiences like having a new baby…

… and watching her grow and change faster than should ever be allowed.

Or having our little boy grow into a big boy who loves his sister (most of the time!)…

and, best of all, decided at just two years old that he wanted to ask Jesus to live in his heart! It’s hard to understand or know what that looks like for someone so young, but we have seen a change in his self control and his desire to do things for his sister, so that’s pretty exciting.

Although we definitely talk to our kids about Jesus all the time, because He’s such an important part of our lives, it was Corban who unprompted said that He wanted Jesus to be in his heart.

In fact, it was Eric’s first night home from the hospital after his emergency appendectomy (we’ll come back to that). Eric normally does bed time with Corban, but I was putting him to sleep because Eric was in bed recuperating. We talked about nightmares, and Jesus keeping us safe, and praying, and he said he wanted Jesus in his heart just like mommy and daddy.

I talked through what that meant (that we love Jesus and want to follow Him and have Him help us make good choices and forgive us for our bad choices, and that He doesn’t physically come into our hearts, but His spirit lives inside us), and he said again that it was what he wanted.

One of the best nights of my life!

Another incredible highlight of 2015 was working with our friends Melissa and Luis to plan the incredible conference Food Blog University. It was the first time for all of us in planning a conference, and it was beyond amazing.

Each and every person there, speakers, attendees, and family members, was wonderful to get to know and we feel privileged to call them our friends.

FBU 15 was hosted at the Dreams Riviera Cancun Resort & Spa, the most incredible all inclusive resort EVER. I’m working on a separate post (with video!) all about the conference, but I had to mention it here because this was like living in a wonderful dream.

While the resort had several restaurants with outstanding food, Larkin got her first taste of sand and we couldn’t keep her out of it!

Corban loved the various lizards, birds, caterpillars, and flowers all over the resort. Every day was a nature treasure hunt for him!

The weather was gorgeous, the staff went above and beyond (including changing our sheets in the middle of the night when Larkin puked guacamole all over the bed!), and we felt so pampered and cared for, while running a conference! If you’re going to have a working vacation, Dreams Riveria Cancun is the place to do it.

So the conference was at the end of October. The kids both got sick on our last night, so the next few days were a little rough.

Then a week after that our dear friends’ children were wrongfully taken by CPS. It was a horrible ordeal for their family (thankfully the kids are back now), and we were as involved in fighting it as much as we could be, but Eric ended up having emergency surgery right in the middle of it all.

You may think he’s on pain meds in this picture, but he was actually feeling completely fine and didn’t need them. For a few days he’d been experiencing a few seconds of 10 out of 10 pain that would have him on the floor screaming, then would go away and he’d be fine.

Thankfully I didn’t see any of these episodes, or I probably would have been a lot more worried than I was.

On the fifth day (Friday), I told him to call the nurse hotline. He wanted to wait until Monday but I insisted. They told him to come to urgent care, so we called his mom to come watch the kids and drove up to Bellevue. We grabbed some sandwiches on the way because he knew they don’t let you eat at urgent care.

The doctor thought it was probably kidney stones, and was really surprised when lab tests came back normal, so he ordered a CT scan thinking they might be too small to show up in blood tests. An hour later, he came in and said, “Well, you have appendicitis so a surgeon will come and talk to you.” Surprise!

The surgeon didn’t believe the diagnosis because Eric wasn’t presenting with enough pain, but once he looked at the CT scan he said Eric needed surgery that evening.

They did the surgery laparoscopically, and once they were in there realized that the appendix had actually perforated (probably when he had the first pain several days earlier) and then attached itself to his colon. Not fun! They said we caught it just in time or things could have been a lot worse.

I went home and got about three hours of sleep, then took Larkin with me to go hang out at the hospital until he was discharged later that afternoon.

It was tough that Eric couldn’t lift anything for a few weeks, but we had wonderful friends and family helping with food and kids during that time.

As we talked about the past year, we realized that everyone in our family has some sort of serious medical issue this year. Larkin was in the hospital for a week after her birth due to a rare blood disorder. 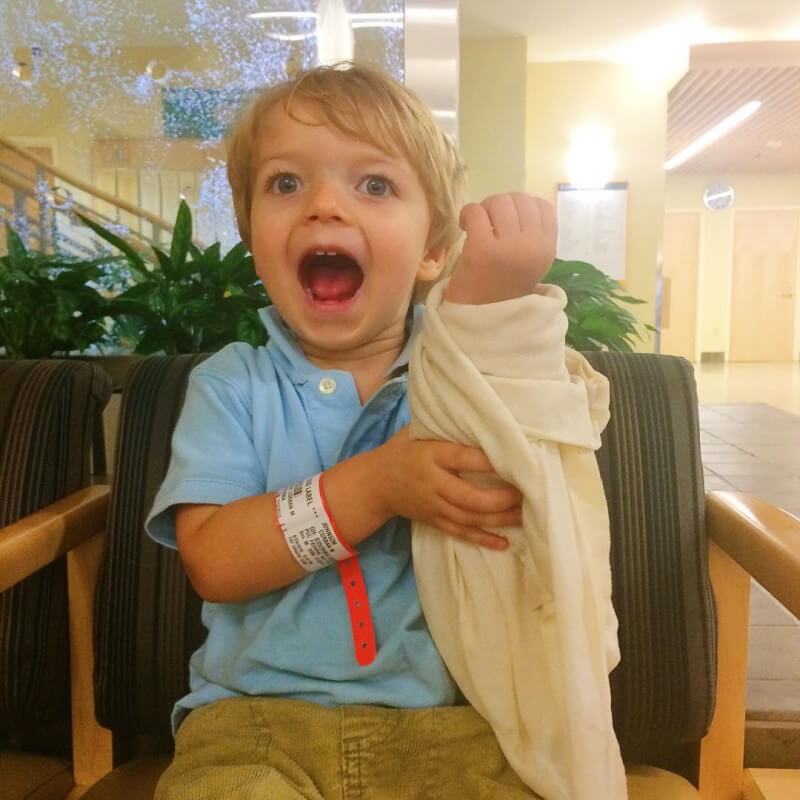 …then just two weeks after getting his cast off he badly burned his other arm trying to sneak fresh baked cookies off of the cookie sheet as I was transferring them to a cooling rack.

As for me? Well, in addition to dealing with some pretty severe postpartum depression that led to being put on medication (which made a huge difference and I’m doing MUCH better!), I also got a second degree sprain of one ligament, and a tear in another. We thought for sure my ankle was broken when it happened. Thankfully our dear neighbor across the street came to stay with the kids until my sister and her husband could come over, and we once again rushed to urgent care.

The ankle is still pretty painful, but I can at least walk normally now.

Throw in a few bouts of stomach flu, ear infections, and helping friends and family through difficult times, and you can see, it was an eventful year!

The funny thing about it though is that looking back at all that we’ve been through has only helped us recognize even more how truly blessed we are to have each other and how grateful we are for our lives. We’re hoping 2016 is a little less of a roller coaster, but we sure do love our little family and the incredible community of family and friends that surrounds us.

We wish you and your families a wonderful Christmas and want you to know how much each of you means to us!