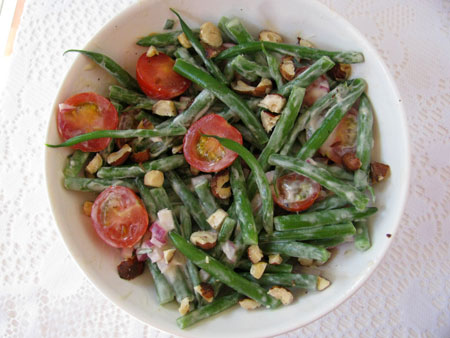 I try to bring something different to every party, barbecue or get together we’re invited to.  It’s fun to test recipes out on people and, since I love to cook, it’s an easy way to show a thank you to whoever invited us.  When my parents invited us over for a BBQ night, I offered to bring the vegetables.  I had a ton of fresh green beans and knew I could think of a fun way to serve them. 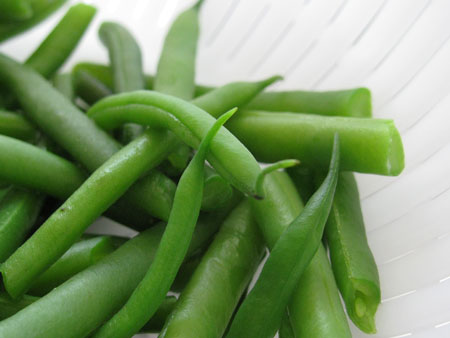 Tomatoes have not done so well in Washington this year, but between my backyard and our CSA, I had about 15 beautifully sweet cherry tomatoes.  Each one glowed in cheerful ruby hues as if lit from an inner light.  Slicing them open revealed perfect tiny seeds and sweet fresh juice.

They were so fresh and naturally sugary, like nature’s candy, that I’m torn between what to do with all my green tomatoes on the vine.  Do I trust that they’ll turn red eventually if we get just one more sunny day between the record breaking days of rain?  Or do I simply pick them green and make something rather than risking a tomato killing frost? 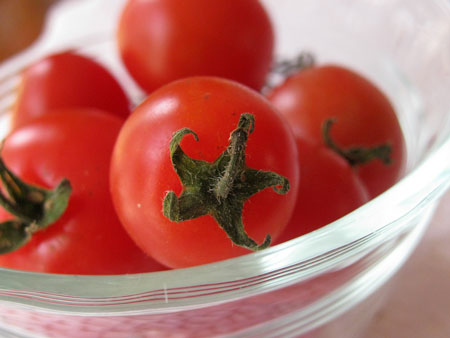 So I knew I wanted tomatoes and green beans but it was time to decide on what to dress them up in.  I boiled the green beans for five minutes until they were just cooked through.  I tasted a slice of tomato and a bite of bean then decided that some sort of creamy vinaigrette was called for.  The tomatoes were so sweet that I didn’t want a sweet vinegar like balsamic, so grabbed a bottle of red wine vinegar.

Once I whipped up the vinaigrette and did another taste test, I realized it needed some red onion, so finely chopped a little and mixed it into the dressing.  Once I tossed the beans and tomatoes in the dressing, I realized that it was time to focus on texture.  Although the beans and tomatoes had a little crunch to them, I needed a stronger crunch to the salad.  I toasted some hazelnuts and chopped them up to mix in.

I thought I was finished and called Eric over to taste it, but something was still missing.  “It’s good”, Eric said, shrugging his shoulders.  But it wasn’t perfect.  We tasted it again, the dressing tangy like an exotic buttermilk, the tomatoes making our tastebuds sing of their sweetness, the freshness of the beans and the crunchy earthy flavor of the nuts.  What was missing was something savory, maybe even a little salty.  “BACON!”  I shouted.

I quickly fried up a couple slices and crumbled them into the salad.  Perfection!  Eric and I ate the entire batch then and there.  Guess it’s a good main dish too!  Fortunately, I had only used 1/4 of my green bean stash and half my tomatoes, so I made another batch to bring to my parents.  Of course, not everyone’s tastes are the same.  My sister and brother don’t like tomatoes, but since they were halved it was easy enough for them to pick those out.  My brother also decided he like it better without nuts, he’s not a big fan of nuts.  But the rest of us LOVED it as is.

As I always say, recipes are meant to be guidelines.  You may like it without bacon, or maybe skip the cream as well and go with a regular vinaigrette to make it vegan.  No matter what, have fun! 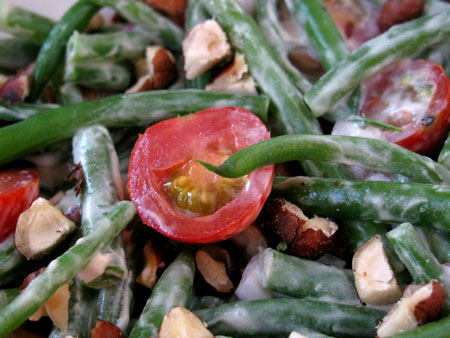 Fill a large pot with water and bring to a boil.  Prepare your beans by breaking off the stem end (not the pretty pointy end) and discarding, then breaking the bean in half.  Put your bean halves in the boiling water and cook for 5 minutes until just tender but stil retaining a slight crunch.  Drain beans and rinse with cold water to stop the cooking process.

In a small bowl whisk together the cream and red wine vinegar.  As it thickens, stir in the salt, red onion, rosemary and thyme.  Whisk in the olive oil.  Toss the beans and cherry tomatoes in a large bowl with the dressing.

Mix in the chopped hazelnuts and crumbled bacon.  Top the salad with fresh ground pepper.

Approximate cost/serving: This was especially affordable for me because all the vegetables and herbs were either from our CSA or garden.  But even if you bought everything the salad would still come out to under $3.  It fed six of us as a side dish (with two other sides) so comes out to 50 cents a serving.

Vegetarian/Gluten Free: You can leave out the bacon to make it vegetarian and skip the cream to make it a vegan recipe.  You’re good to go for gluten free.