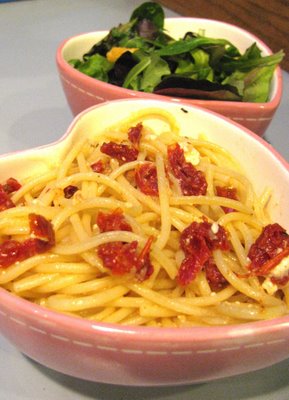 Sick, Sick, Sick! That’s right, Eric and I have caught that nasty bug that’s going around. Fortunately it seems to be limited to our sinuses, no upset tummies which we’re quite thankful for. I’m pretty miserable, but wanted to get this post up because it was such a fun romantic meal. One interesting aspect was that since we’re house sitting for his parents, I had to work with the food they had. It felt like a Top Chef challenge! 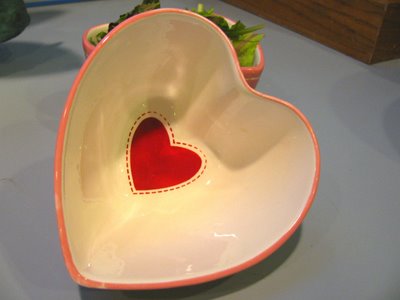 A few days before Valentine’s Day I was at Safeway and saw these cute heart shaped bowls. They were on sale for $1 so I thought they’d be great for a fancy, romantic meal. I made a few courses in small portions all served on one plate or bowl that we shared. That made it very intimate and fun, you have to sit close to share a dish! 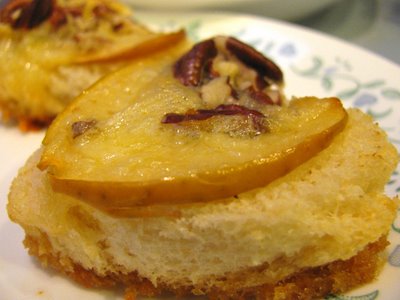 First we had some thick sliced bread cut in the shape of a heart. I oiled a baking pan and set the hearts in it, then topped them with slices of fuji apple, freshly shelled chopped pecans, and brie. Then I toasted it in the oven for about 5 minutes at 350 degrees. 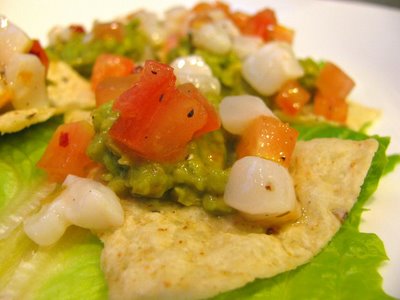 Next was a scallop and roma tomato ceviche with fresh avocado on tortilla chips and a bed of romaine. This was my first time using or eating scallops and I was really pleased. Ceviche seemed rather ambitious, but it really turned out well I simply chopped the scallops and tomatoes and marinated them in lime juice, garlic, salt and pepper in the fridge for a few hours. I mixed fresh avocado with some latin seasonings and topped each chip with the avocado and then the ceviche. 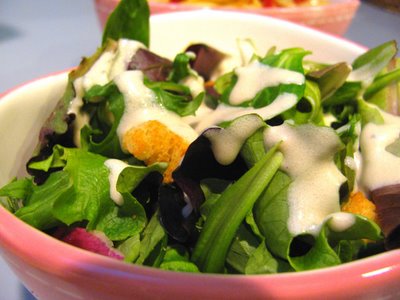 After that was a simple mixed green salad with Patti Johnson’s Homemade Caesar Dressing (that’s Eric’s mom) and garlic croutons. 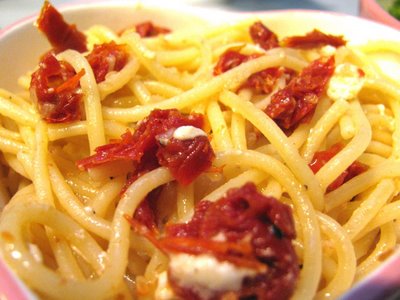 Finally we had a garlic and lemon pepper pasta with sun dried tomatoes and feta. The tomatoes stand out so well in this dish, it tastes amazing! It’s so simple to make. Boil your noodles and then mix in olive oil, lemon juice, pepper, chopped garlic, tomatoes and feta. Yes, it’s that simple.
Eric thought it was very fancy, and although it took a bit of prep work, everything was simple to make. The dessert was more complicated, but you’ll have to wait for the end of the month because it’s my Daring Baker’s Challenge!