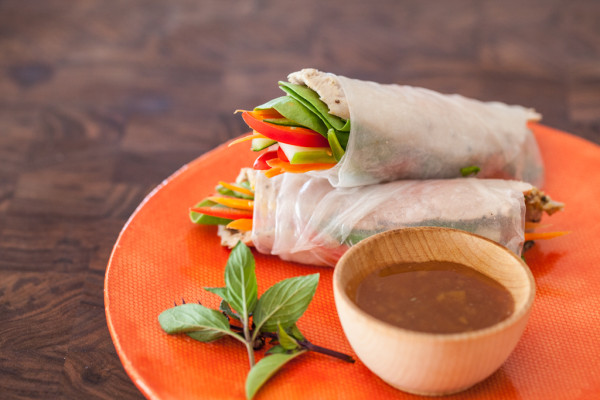 Hooray! I can finally share this video and recipe with you!

Back in June, my friend Jaden (Steamy Kitchen) put together an awesome day for myself and a few other special bloggers: Sandy & Paul (Reluctant Entertainer), Jenny (Picky Palate), Jessica (The Novice Chef), Lauren (Lauren’s Latest), and Amanda (Kevin & Amanda) .  We all got to make some cooking videos produced by the National Pork Board and Costco featuring favorite pork recipes.

I had the privilege of joining Jaden in making her recipe for Vietnamese Spring Rolls with Slow Cooker Pork.

What you don’t know in this video is that I was 7 weeks pregnant and really struggling with nausea and exhaustion.  Jaden was the only person I told, and it nearly killed her not letting the cat out of the bag!  Later that week, she told Eric we’d better not talk to her on Twitter or Facebook until we made our announcement.

You can check out photos of our day of making video kitchen magic happen on Jaden’s post. Oh and of course, the shoot was far from perfect, but full of laughter.  Here’s just a few of the MANY bloopers!

October is National Pork Month and Costco, one of my favorite stores, will be offering a special cut of pork at a discounted price for each of the four weeks in the month.  If you want to try the recipe below, Costco is the only place you can get the pork sirloin tip roast.  I LOVE buying this cut because it comes with 4 roasts wrapped individually, so you can use one and freeze the rest.  Plus it’s CHEAP!!!!

I’ve been absolutely exhausted and stretched a little thin in trying to get things ready for baby, but I do have some posts I’m working on.  Expect to be seeing lots of pumpkin and squash over the next few weeks!!!

For the Sweet Plum Dipping Sauce

1.  Dip the rice paper in warm water and shake the excess water off. Place on a clean, dry surface. The rice paper will be a little stiff, but will soften up.

2.  Fold the rice paper in half in the shape of a half circle.3.  Lay the slice of roast pork near the bottom half of the roll.  Layer on vegetables and herbs.4.  Begin at the bottom and roll up, keeping the roll tight.  Continue rolling up until finished.