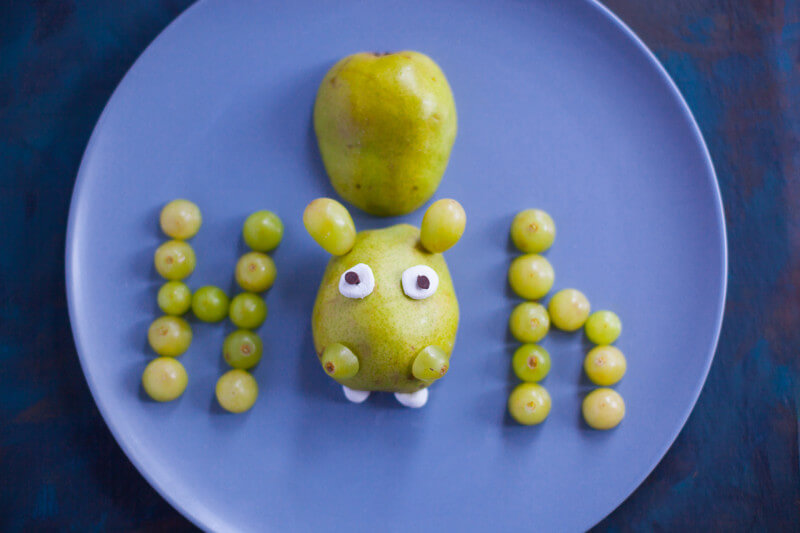 Alphabet snacks are one of the easiest ways to introduce reading to toddlers and preschoolers. Healthy food turned into cute animals, and their corresponding letter, can make kids excited to learn about letters and the sounds they make. Today’s alphabet snack is a hungry hippo that’s almost too cute to eat!

A couple of weeks ago I was at the grocery store and saw plump green bartlett pears, that for some reason immediately made me think of hippo butts. No, I don’t know why, but it stuck in my mind and I spent the whole shopping trip imagining how I could turn a pear into a hippo.

Deciding I could do it, I grabbed a few pears, some green grapes, and mini marshmallows, hoping I could make something as cute as I imagined. 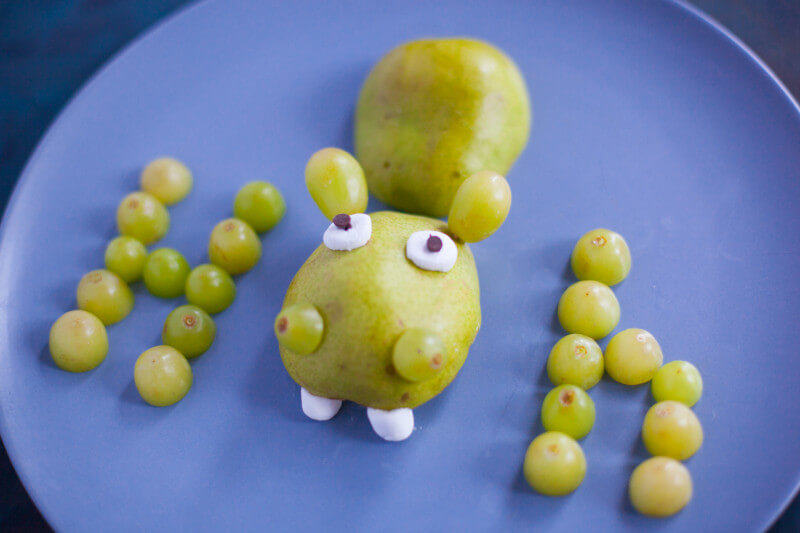 I went to work in the kitchen during Corban’s nap, expecting to spend quite a bit of time experimenting and using multiple pears. But it only took me five minutes to easily turn the very first pear I tried into a hippo! So I decided to make a quick video explaining how I made it, and showing Corban’s reaction when he woke up.

Notice how Corban was making the H sound and saying “H is for hippo” as he ate? We do that with every alphabet snack, practicing the sound the letter makes. Then we read a fun book with the animal in it.

We have a several hippo books we’ve enjoyed, but these three are our top picks. 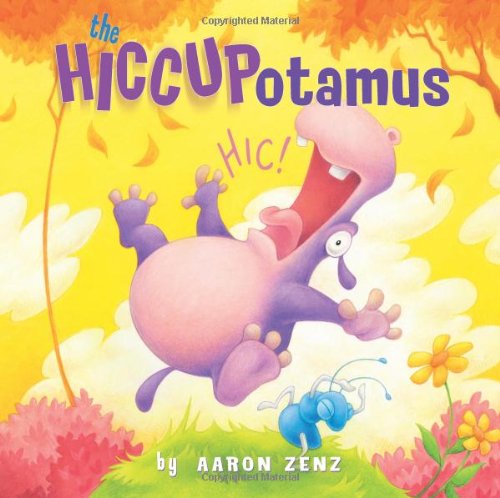 “Hiccupotamus”, by Aaron Zenz, is an adorable book about a hippo with the fiercest hiccups ever, and filled with illustrations done by hand in colored pencil. The story is in a silly rhyming style, reminiscent of Dr. Seuss, and always has us giggling the whole way through. 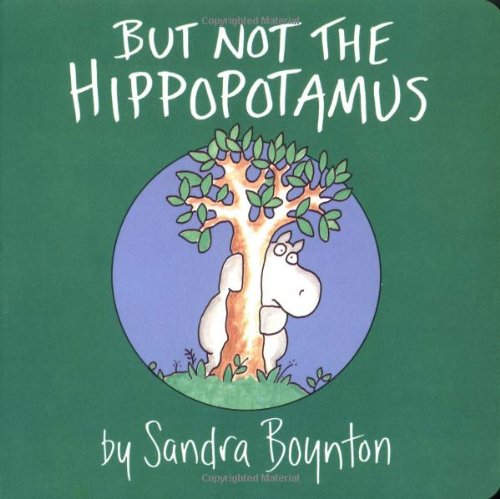 Sandra Boynton also has multiple books with hippos to choose from. One that really features our chubby friend is “But Not the Hippopotamus“, about a hippo who has nothing to do, until he’s finally invited to join the other animals and happily scampers off with them. 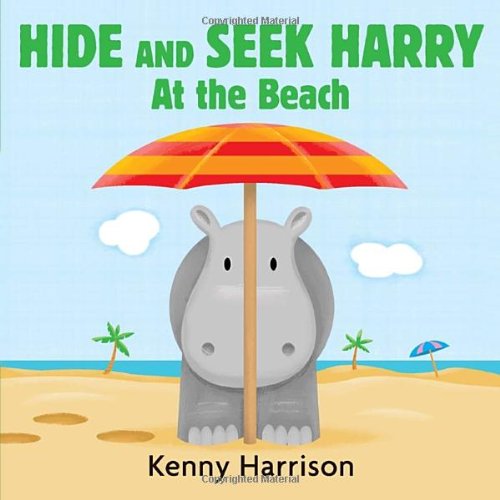 Our final recommendation is a cute book that we’ve checked out from the library several times. “Hide and Seek Harry at the Beach” has cheerful illustrations with a hippo hiding in the most ridiculous places on a day at the beach with friends. We also like that there are a lot of repeating images on pages, like crabs, shells, and starfish, so it is a lot of fun to search for them throughout the book.

HOW TO MAKE A HIPPO ALPHABET SNACK

If you’d like to make your own pear hippo, which I think will make a great naturally green recipe for St. Patrick’s Day, the photos below show in closer detail how it’s put together. 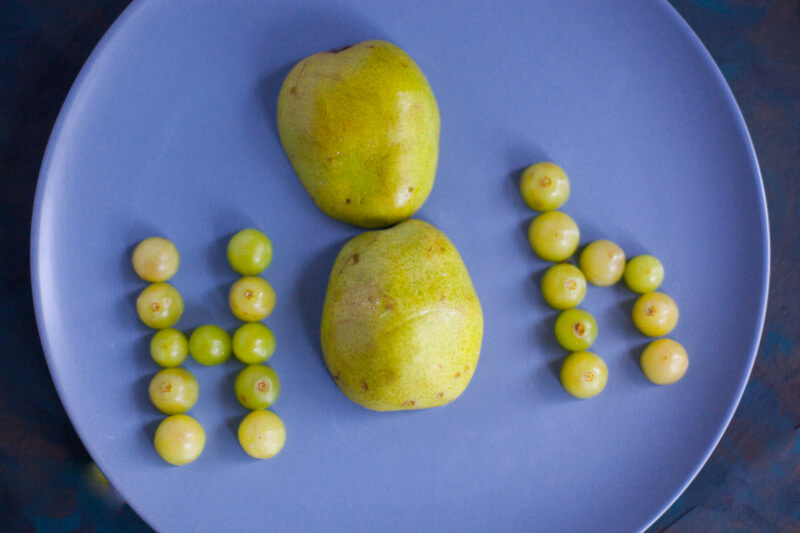 Start by slicing a Bartlett pear in half and removing the stem. Place the two halves on a plate, small ends together, to form the head and body of the hippo. Use halved grapes to make a capital and lower case H on either side of the hippo. 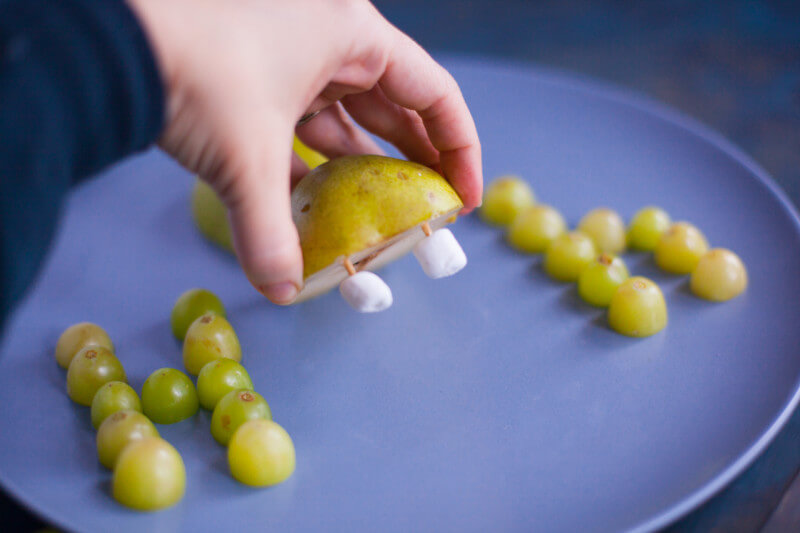 Use a toothpick, broken in half, to attach mini marshmallows on the underside of the hippo’s mouth for teeth. The toothpicks will help hold the head off the plate. 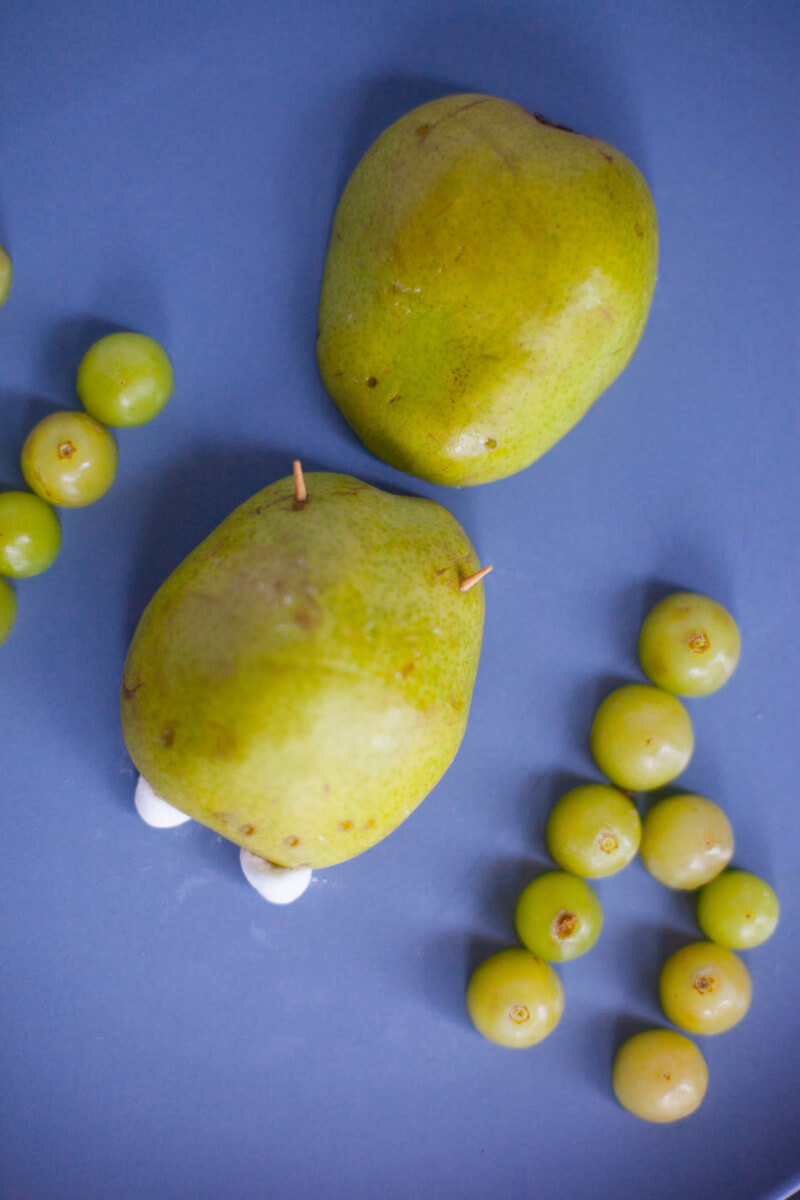 Stick another couple of toothpick halves at the back of the head. 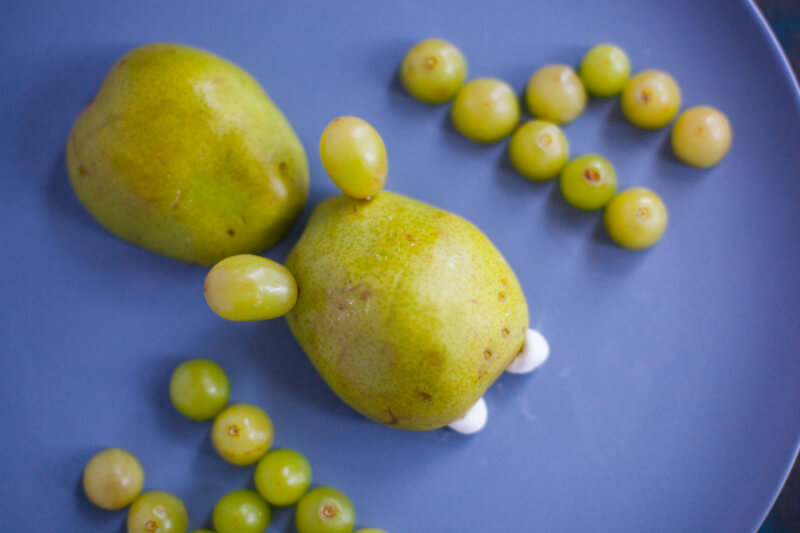 Place a whole grape onto each toothpick for ears. 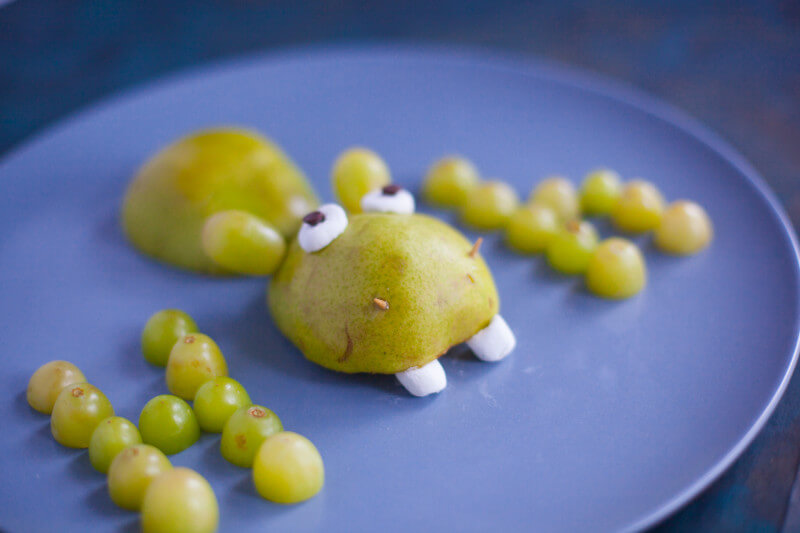 Make the hippo’s eyes by squishing two mini marshmallows and placing them on the head. If they fall off, you can poke a little chunk out of the bottom of each marshmallow to help them stick to the pear. Use a toothpick to poke a hole in the top of each mini marshmallow eye, and stick a mini chocolate chip in, point down.

Then place two toothpick halves into the nose of the hippo. 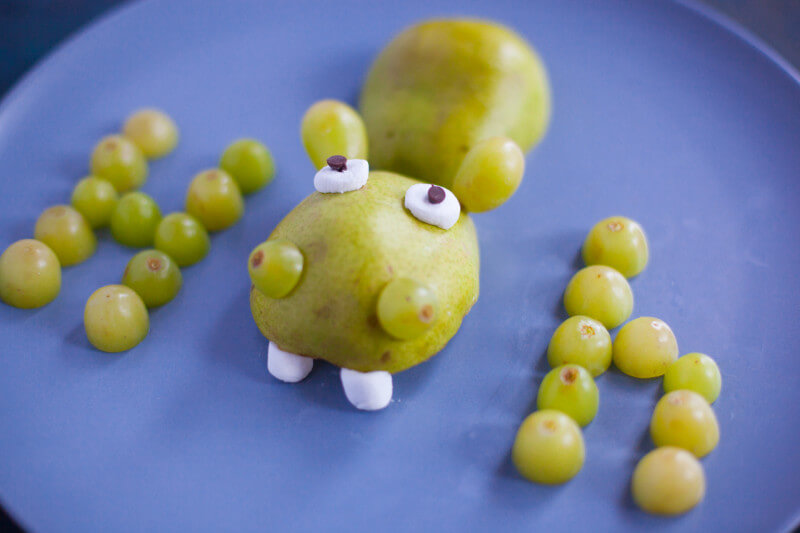 Cut the stem ends off of two grapes, about 1/3 of the grape, and place them onto the toothpicks for nostrils.

And there you go! A super cute hippo alphabet snack in just five minutes. 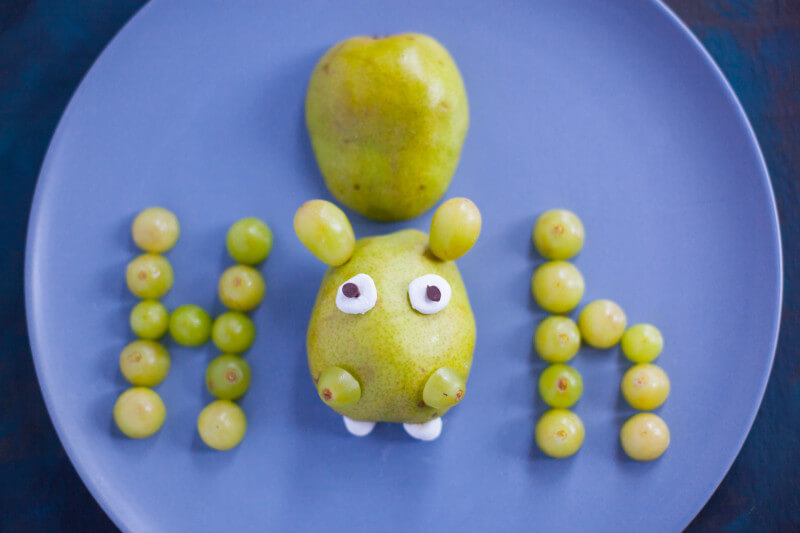 We did end up making more hippos with the remaining pears, letting Corban help with assembling them. I’d hoped to get some photos of him putting one together, but poor little guy got sick the day we were going to make it.

Just know that it’s really simple, and as long as you do all the cutting, you can guide your mini chef in putting the hippo alphabet snack together themselves.

Do you have a hippo book you recommend we check out?

THANKS FOR SUPPORTING EATING RICHLY EVEN WHEN YOU’RE BROKE

By clicking one of these links before making a purchase on Amazon, we get a small percentage of your purchase, without it costing you anything extra! Thanks for helping to support our family business. 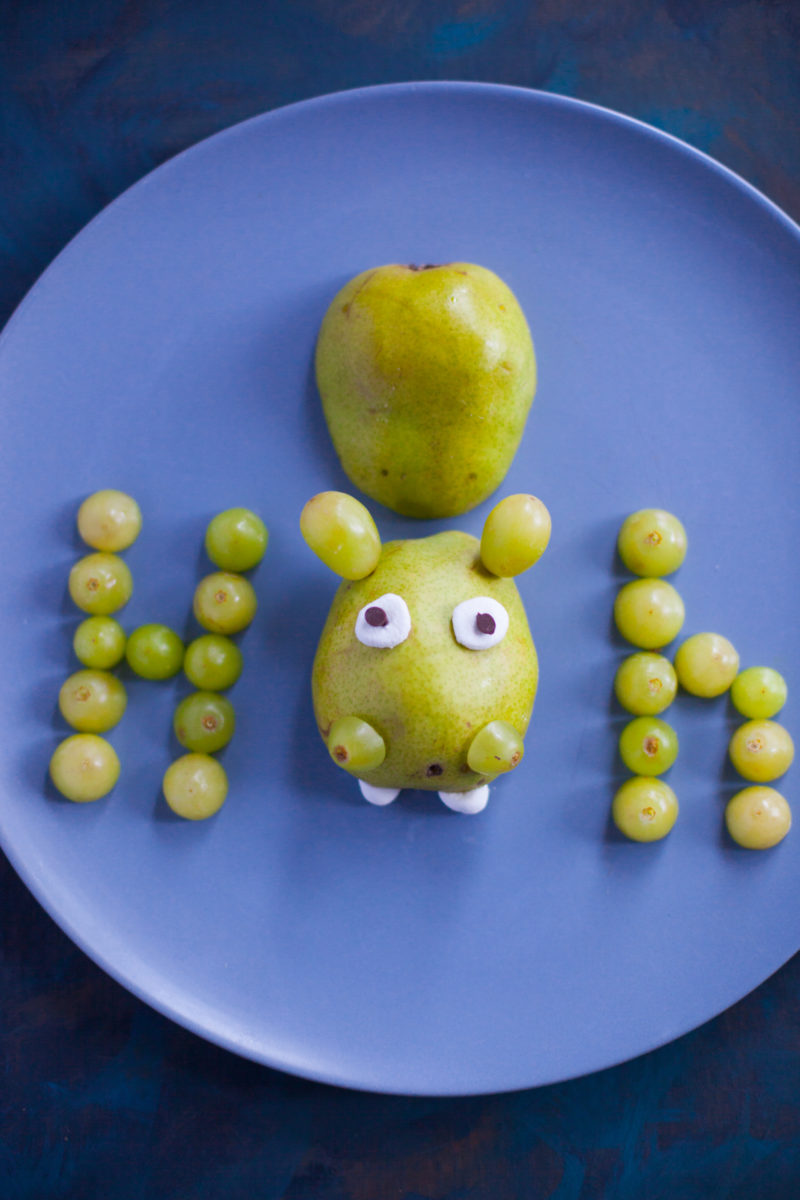 Be sure to check out each of their Mini Chef posts as well. We would love it if you would share your Mini Chef posts with us each week, too! Follow along socially and join in on the fun by using our hashtag #MiniChefMondays to share creations your mini chef created in the kitchen. Additionally, if you have a kid-friendly recipe that kids can easily recreate, link up! Don’t have a blog? Share the URL of your instagram photo in our linky below.

7 thoughts on “Alphabet Snack H is for Hippo”