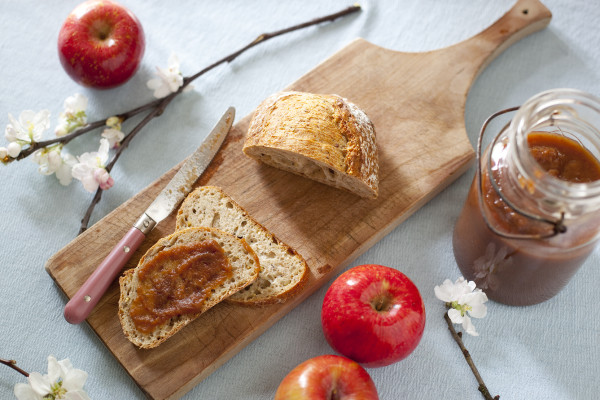 I wasn’t expecting such a buzz last week when I mentioned on facebook that the crockpot of apple butter was making my house smell amazing.  But suddenly people were commenting, and emailing, and begging for the recipe.  So I promised to post it ASAP, and here it is!  I do have to say this is REALLY good apple butter.  I’ve given it as gifts and had people chase me down in church to ask how I made it.  In fact, if I were that type of person I might boastingly call this the best apple butter recipe ever!  But really, there are two secrets to this apple butter, and I promise to share both of them with you.

The first secret is that I don’t use applesauce to make it, I use fresh apples.  It’s common to use homemade or store bought apple sauce to make apple butter, but the first time I wanted to make it, I just had lots and lots of apples.  Fortunately, I also had a very handy apple peeler/corer/slicer.  I bought it right around the time Eric and I got engaged when I found out how much he loves apple pie.  It makes apple pie, apple sauce, and apple butter A LOT faster to make. 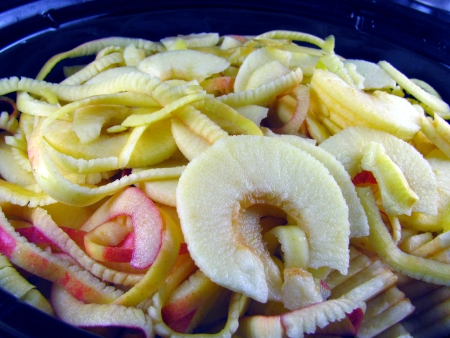 The second secret is that I cook it for up to 48 hours in a crockpot.  That’s right, two days of cooking.  But you can’t just put everything in and leave it alone for 48 hours.  You have to add apples as it cooks down.  It might sound involved, but really it’s only about five minutes of work 3 or 4 times.   Apple Butter is so simple to make!  Throughout the process, I say 10 hours since that’s the setting on the crockpot, but it’s not an exact science.  It’s okay if you want to add more apples sooner if it’s cooked down.  It’s also okay if you’re not home or asleep when it finishes as long as your crockpot has a warming setting, it can stay on the warm setting several hours.

Another cool thing about this apple butter is that it uses the peels of the apples.  When I’m making apple sauce or apple pie, something that I want just the apple flesh for, I’ll often make sure to make a batch of apple butter as well.  I put the extra peels in the crockpot and then get to feel really good about not wasting food. You don’t have to peel the apples for making apple butter, I just usually make it at the same time as making apple sauce so use my peeler/corer/slicer on 40 pounds of apples at a time and turn all the peels and whatever I don’t use for apple sauce into apple butter.

A friend asked me what you can use apple butter for other than spreading on bread.  I think you can use it in any recipe that calls for jam.  Like I mentioned in my rhubarb jam post, you can use it in cake layers, bakewell tarts, on shortcakes, I’d also use it in thumbprint or sandwich cookies. I put the word out on Twitter and my friend Jen said “My mom used to make muffins and “fill” them with a little dollop of jam.”  Love that idea!  How would you use this apple butter? 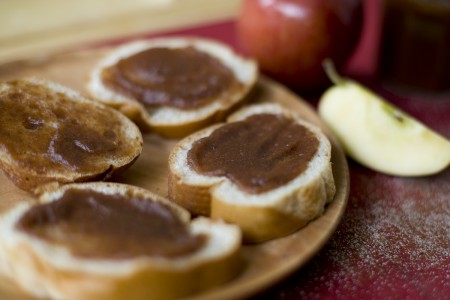 Core and slice apples, dumping the slices into the crockpot as you go.  Stop prepping apples when the crockpot is full (just save the remaining apples for later).

Add 2 tsp cinnamon, 1/4 tsp allspice, 1/2 tsp cloves and 2 cups of sugar.  Mix well and put the crock pot on low for 10 hours.  Feel free to stir when you walk by! (NOTE: some people have had their countertops warped by crockpots, make sure yours in on a surface that can take the heat)

After 10 hours, core and slice more apples to fill the crockpot.  Dump the new apple slices into what’s already cooked down.  Mix well.  Cook another 10 hours on low.

Repeat the process of adding more apples, mix, set the crockpot for another 10 hours.

Taste test your apple butter and add more cinnamon, allspice, cloves and sugar to your taste.  I usually add the same amount I did the first time, although sometimes I only add one more cup of sugar, depends on how sweet the apples are.

After it’s gone a good 30-40 hours, use an immersion blender to puree it.  (You could probably put through food mill or blender too). Continue cooking until it’s the thickness that you want.  If it’s not cooking down enough vent the lid a little.  If it gets too thick, add some water or apple juice.

When it’s the consistency you want, can it using a *waterbath method.

*You can do a google search for waterbath canning to get lots of tips.  I don’t have any special tools for canning.  I use a big pot of water, rubber coated tongs to lift the jars (you can also just wrap some rubber bands around regular tongs), and a ladle to fill the jars.  Basically, fill your biggest, tallest pot with water and bring to a boil.  Place your empty jars and new lids (always use new, but can recycle rings) in the water for 5 minutes.  Take them out, fill with apple butter to 1/4 inch from the top.  Wipe the rims and place the lids on the jars.  Screw on the rings and place in the boiling water.  Boil them (this is processing) for 5-20 minutes using the chart below, making sure the water level covers the jars completely.  Remove and set on a counter, don’t move them for 24 hours!  Then press the center of the lid.  If it doesn’t pop in (meaning it already has), it’s sealed and good to store for up to two years.  If it does pop in, refrigerate it and use in a week.