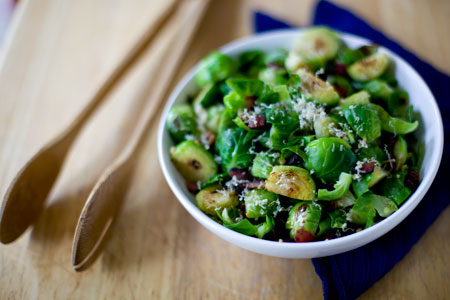 I’m going to let you in on a secret, this recipe is guaranteed to get anyone to eat brussels sprouts.  Okay,  I can’t actually give you a guarantee, but it’s worked on everyone I’ve tried it out on so far.  A few simple ingredients change these sprouts  from plain to mind blowing, and even picky eaters  consistently asked for seconds.

Brussels sprouts are one of the few vegetables in season right now, and in pursuing my goal to eat seasonally, I bought a giant bag of them.  Eric wasn’t very excited when I put them into our shopping cart, but I promised him they would blow his mind once I cooked them the way I planned. 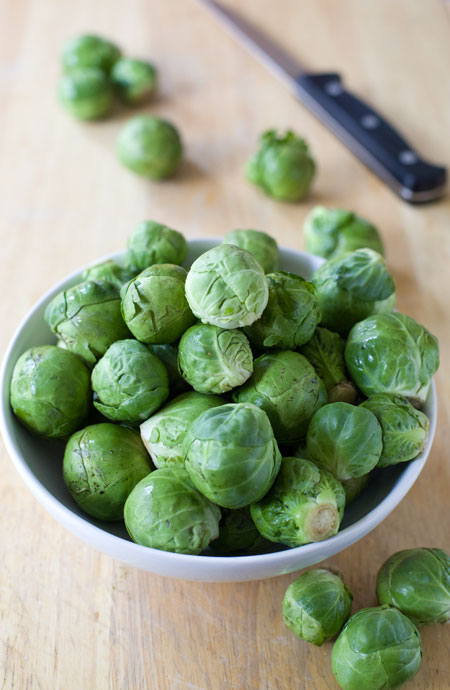 In the third grade I did a report on Belgium, and we were supposed to do something that involved the entire class.  I decided that I wanted to bring a Belgian food for the whole class (of course!).  I was torn between Brussels sprouts or Belgian waffles but due to the lack of a sweet tooth I went for the vegetable option.  Sadly, no matter how much I tried to convince them these were just cute little cabbages, only six of my peers felt the same interest in trying brussels sprouts.

Looking back, I think brussels sprouts’ bad rep is somewhat deserved.  Too many people have had the slimy, mushy, boiled brussels sprouts that childhood vegetable nightmares are made of.  This makes them reluctant to try any kind of brussels sprout recipe. Sadly they don’t realize that simply roasting, rather than boiling, these tiny cabbage like morsels renders them crispy on the edges and tender in the center with the sweet flavor of caramelization. 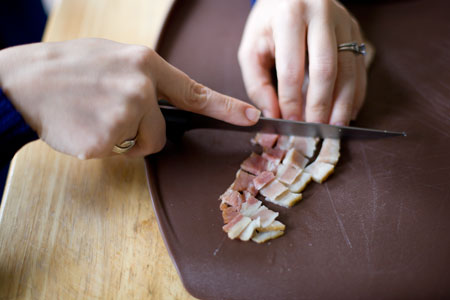 The best brussels sprouts I ever had was at the 2009 Foodbuzz Festival.  Chef Dennis Lee of Namu created a winning side dish that completely out shown every other bite of the weekend.  The recipe was made with guanciale (un-smoked bacon made from pig jowl), dashi (a kind of fish stock), ponzu (a soy, vinegar and citrus mix), bonito flakes (dried shredded fish) and fried garlic.

I was so thrilled when Chef Lee shared his recipe with us, but decided it needed to be simplified to make at home.  I wanted to work with what I already had on hand, which is a great way to save money in your food budget.  So instead of buying guanciale, I pulled a thick cut slice of my homemade bacon out of the freezer.  Since I didn’t smoke my bacon, the flavor was very similar, but I think this could work well with any thick cut bacon.  I also skipped the dashi because I didn’t want to buy any, and though I had bonito flakes (the key ingredient), I didn’t want the extra step of making my own dashi. 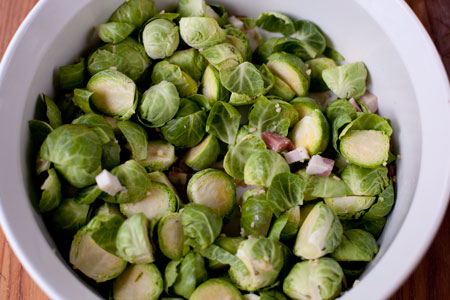 Finally instead of frying the garlic in advance and boiling the brussels sprouts, I simply put the brussels sprouts, minced garlic and chopped bacon into a dish and roasted them all together.  This saved me a good 30 minutes of time and made the recipe go from something I needed lots of time to work on, to a dish I can make any night of the week.

The two ingredients in this recipe you may not be familiar with are ponzu sauce and bonito flakes.  Ponzu is basically soy sauce, rice vinegar and some kind of citrus juice (often from the yuzu fruit).  You can get ponzu cheaply at an Asian market, but if you don’t have one near you it’s also easy to buy ponzo online.  If you want to make your own ponzu sauce,  you can substitute lime juice for yuzu.

Bonito flakes (or katsuobushi) are flakes of dried, fermented and smoked skipjack tuna (also called bonito).  I know, it sounds gross, but just like fish sauce, bonito flakes lend an intensely savory flavor to whatever they’re added to.  This is one of those ingredients you won’t believe the impact of until you try it.  The cheapest place to get them will be an Asian market, but you can also buy bonito flakes online. 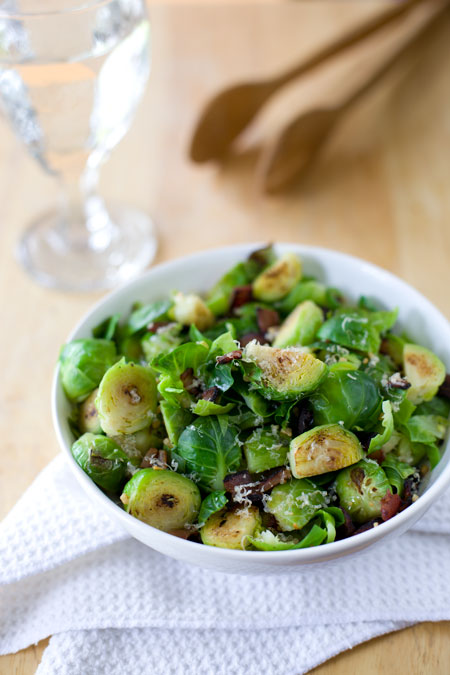 Mix the brussels sprouts with garlic and bacon in a casserole dish.  Roast them for 30-40 minutes, stirring half way through.  Sprouts are done when the center is tender and the edges are crispy.

Sprinkle the brussels sprouts with the ponzu sauce and toss to coat.  Sprinkle with bonito flakes before serving.

Approximate cost/serving: I get brussels sprouts for about $2/lb at the local grocery store (this year I hope to grow my own!) and my bacon is 13 cents a slice. The whole dish comes out to about $2.45 so just 31-41 cents a serving.