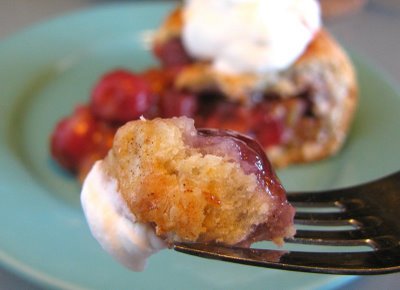 Remember the pie I promised you? I keep my promises! I’ve heard of skillet pies before, but I hadn’t tried to make a pie in a cast iron skillet, until now. We got some rhubarb in our first CSA pick up, and I had a bag of cherries in the fridge, so I decided that it was time to try and make up my own skillet pie. Making up a baking recipe always feels a little more frightening than making up my cooking recipes. Baking is more of a science, requires real measuring (which often feels like a waste of time to me), and can turn out disastrously from the simplest mistake. But this element of danger also makes your successes feel so rewarding! This cherry rhubarb skillet pie was definitely a success. 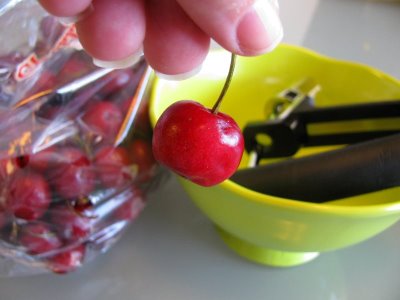 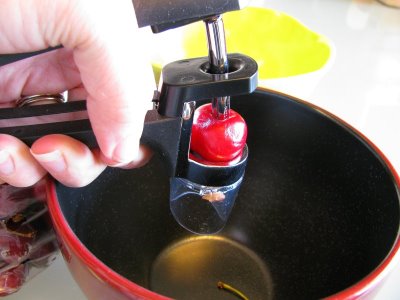 I started with the filling, the easy part of the pie. Most recipes I’ve seen for rhubarb call for LOTS of sugar. Rhubarb is very tart, I mean really really tart. I like tart, but if I just chew on a piece of raw rhubarb my whole face puckers up, kinda like my little brother when he was a toddler and I’d tell him “Open your mouth and close your eyes and you will get a big surprise” then would squirt lemon juice into his mouth. Yes I know, I’ve had to forgive myself numerous times for that one. It’s one of those things you do as a kid that you know in your head now doesn’t really matter, but you still feel terrible about it as an adult and have to learn to just let it go! 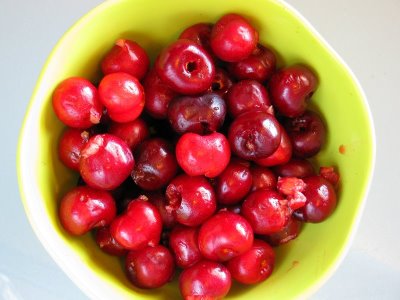 Anyway, the cherries were also a little tart, but less than the rhubarb, so I figured their natural sugar would counteract some of the rhubarbs tartness. I was so excited to use fresh cherries! Usually I use canned because pitting cherries by hand was too time consuming for me. But then, in the incredible IFBC gift bag, lo and behold, a cherry pitter! I was having way too much fun with this cherry pitter, I felt like a cherry pitting maniac. Just one punch, like a stapler, and my cherry was ready to go. I pitted this whole bowl full of cherries in just a couple of minutes. By the way, I threw away the clear plastic splash guard. It kept falling off, and I was using a deep enough bowl that I didn’t really need it anyway. 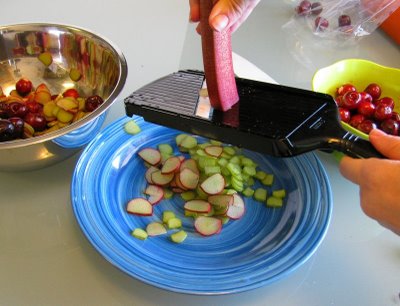 My next fun tool I got to use from the gift bag was my Kyocera ceramic mandoline. Oh man, I became a rhubarb slicing machine, my hand flying so fast that I could hardly see it! I LOVE that mandoline, it made slicing the rhubarb a breeze. I’ve wanted one for a while, but just couldn’t afford more kitchen tools, so getting one in the bag was such a blessing. Now, you can definitely pit cherries by hand, and slice rhubarb with a knife, but I really appreciated the speed and convenience and might not ever have used fresh cherries without the pitter. It’s one of those tools you never think you need until you get one and then wonder how you lived without it. 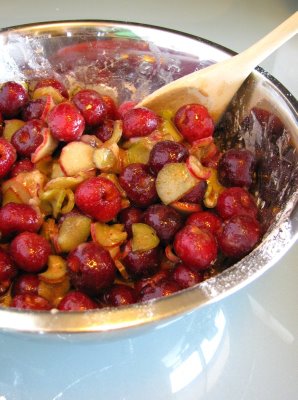 Anyway, now that I’ve raved about my new tools, back to the filling! Did you know that a little salt can help with tartness? That’s another secret for the filling, anytime I make something sweet with rhubarb, I add a little salt and then can use less sugar in the recipe. Then I decided, as long as I’m putting salt in the filling, why not some pepper? One of my favorite chai teas has black pepper in it, I love the spicy kick it gives. So I decided it could work in pie, the pepper flavor doesn’t jump out at you, but I can taste it slightly if I’m thinking about it. Then I just went through my spices, smelling things and decided on nutmeg and ginger. 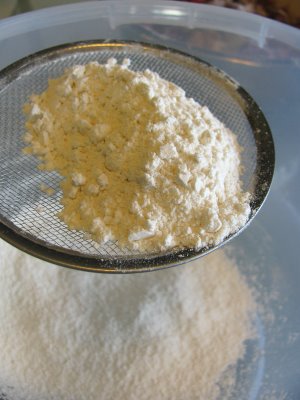 While your rhubarb and cherries are soaking up the sugar and spice and everything nice, start on your pie crust. For the skillet pie, I felt I needed a crust that’s denser and more breadlike than a regular pie crust. It needs to be able to fold over and drape across the top of the pie. I usually sift my flour and baking powder/soda when baking. I don’t think it’s actually necessary, but it aerates the flour which helps it absorb liquids better, it also ensures you don’t get lumps. It’s often more important for cakes or sauces than other things, but I figure it doesn’t hurt 🙂 I skip it when I’m in a hurry though. I have a flour sifter on my wish list, right now I use my $1 frying skimmer which takes longer, but is a cheap substitute. 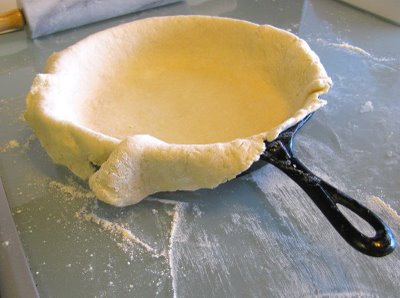 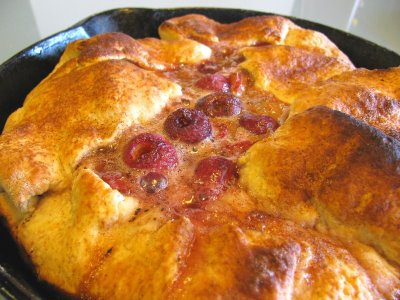 One of the fun things about skillet pies is working with the crust. It kind of reminds me of fondant (the feel of it not the taste!). It’s sturdy enough that once you roll it out, you simple drape it across your pan, nestle it in there, and fold it over your filling. Alright, alright, I’ll give you the recipe already! 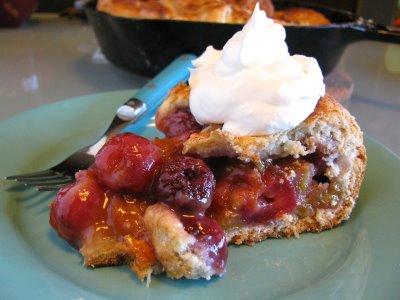 Sift flour and baking powder (optional) add salt and shortening then cut shortening in with a pastry cutter if you have it or a fork if you’re poor like me! Begin adding milk a little at a time, but not all of it, and mixing it in. Stop when you have a dough that’s easy to work with. I had about 3 TBS left.

Use some butter or shortening to grease a 10 inch cast iron skillet. Roll your dough out to a 14-15 inch circle. Place in the skillet and get it nestled into the bottom and sides. Pour filling into the dough. Fold dough over the filling (it shouldn’t completely cover it). Use a spoon or brush (or clean fingers) to spread the remaining milk on the top of the dough, then sprinkle with cinnamon sugar.

Bake 25 minutes, then cover crust with a ring of foil to prevent it from burning. Bake 25 more minutes and remove. It’s easier to cut if you let it cool before serving.

Approximate cost: The whole pie cost me less than $5 to make, we made it into 8 pieces so around 60 cents a slice!
Vegetarian/Gluten free: this can be made vegetarian or gluten free by using vegan shortening and substituting rice flour or brown rice flour.