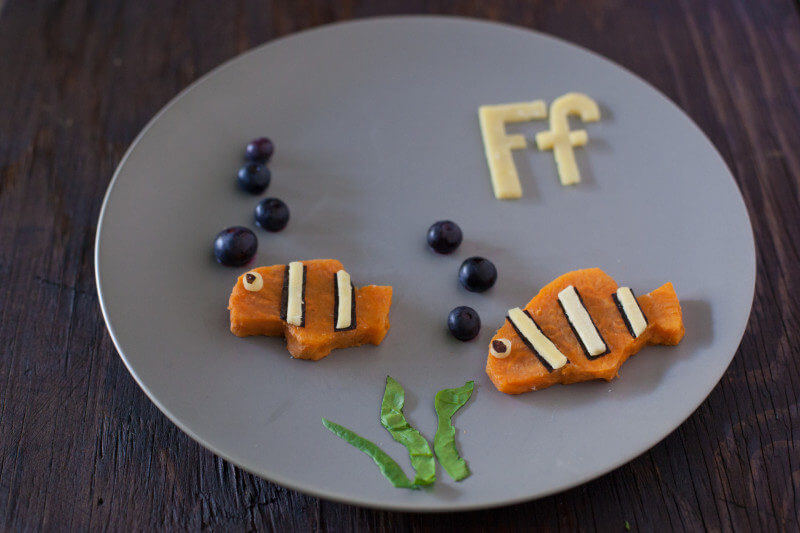 These sweet potato fish are part of our Alphabet Kid Snack series of healthy toddler snacks that make learning fun. Let your little ones dive into learning with this healthy kid snack that looks just like Nemo and his dad!

This post was originally published in October 2015. We’re bringing it up from the archives because not only is it one of our favorite healthy toddler snacks, but Corban now helps to make it!

Whether you have a toddler or a pre-schooler, you know that snacks can sometimes be the most important meals of their day. Little kids often want to graze throughout the day, never sitting still long enough to eat a full meal. 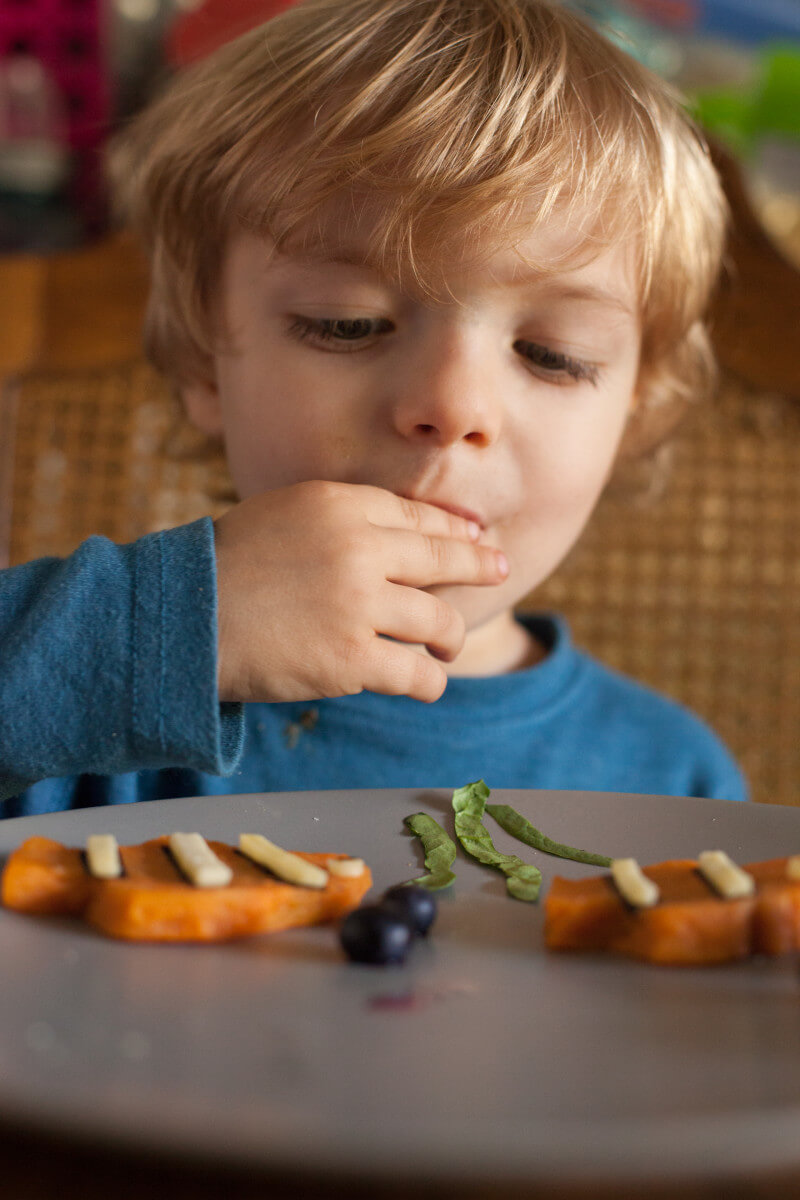 If you have a child who happily eats three meals a day with no issues…well…tell me your secret!
My little guy Corban is all boy, and he would much rather turn the couch into a trampoline/rocket ship/fort than sit down and eat.
When life is busy, and you suddenly realize your little one is getting HANGRY (that’s hungry+angry in cool kid lingo), it’s way too easy to turn to carbs like crackers, cereal, bread, etc. Don’t get me wrong, we feed those to our kids too, but we really try to give them a variety of healthy foods, including lots of fruits and vegetables.
A fun way to get healthy foods into our toddlers is through cute creative snacks.
Today’s alphabet kid snack features sweet potatoes, white cheddar (we used
Kerrygold Skellig sweet cheddar, YUM!), and blueberries, with a little spinach and dried seaweed as well. If you need a dairy free option for your child, try using peeled apple or jicama in place of the cheese.

These alphabet snacks make great educational activities for toddlers, because they help them use multiple senses. Kids see the fun pictures, then taste and smell the food while eating it with their fingers (touch). After practicing the sound the letter makes (F is for Fish, F-F-F-Fish), you can read a book related to the snack for a fun toddler sensory experience using all five senses. 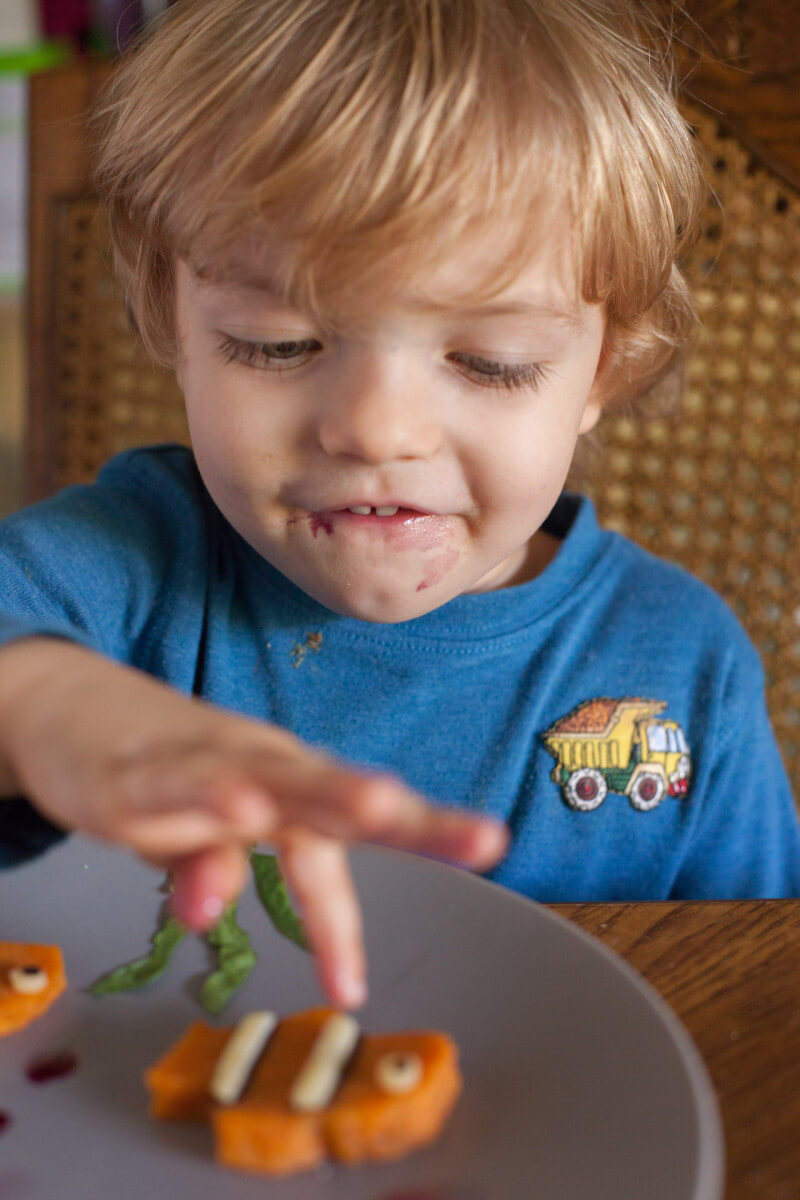 See him practicing his F sound?
While my son LOVES the
Disney Nemo Sight and Sounds book, I can’t recommend it because the buttons broke within a few weeks after it was given to us as a gift. Looking at the Amazon reviews, it seems to be a common experience with the book. He still loves the story, so we read it regularly, but there’s no sense in paying so much for sounds that aren’t going to work for very long!
I prefer this clownfish book. It contains lots of fun facts about clown fish with really colorful pictures. It’s also pretty simple for early readers, so will be a good book for when Corban feels ready to start reading. 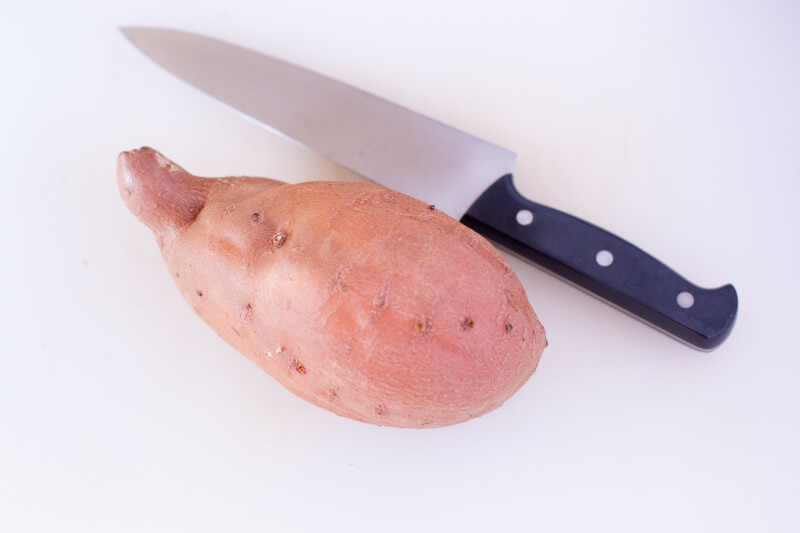 To make this cute fish snack, start with a large sweet potato. 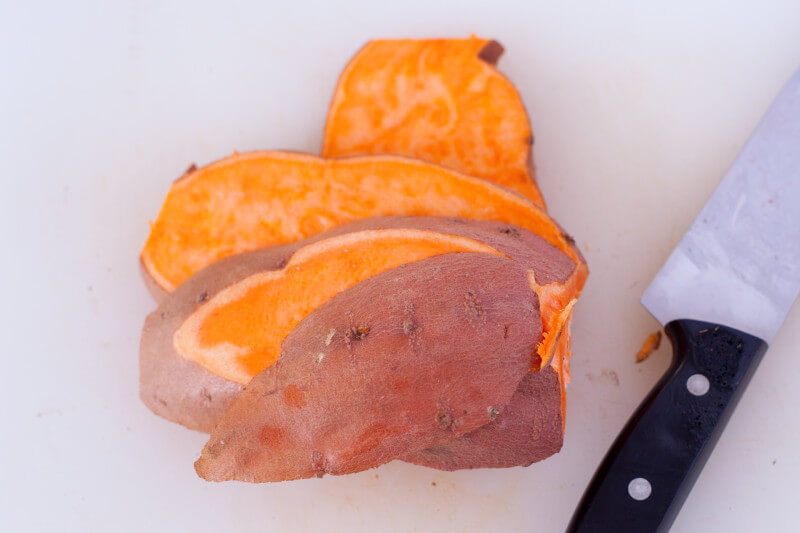 Slice the sweet potato into planks about 1/4 inch thick. 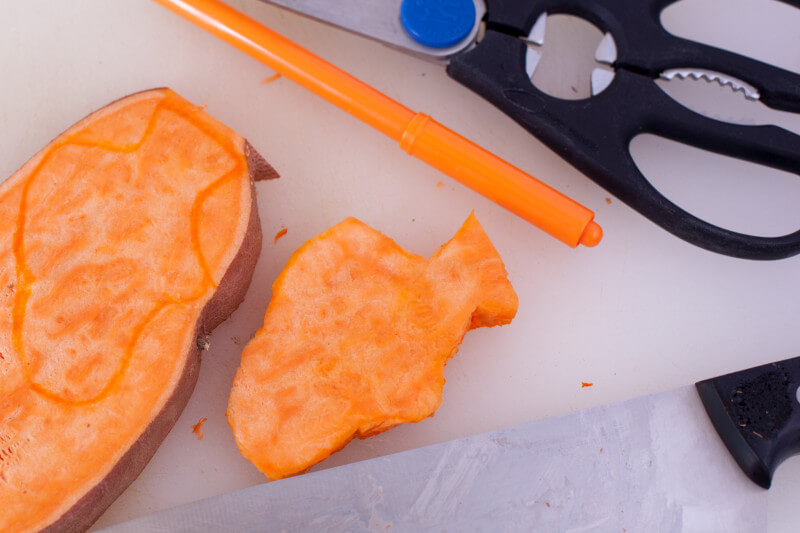 Now draw a basic clownfish shape on two of the planks of sweet potato with a
food dye pen. I used orange so it wouldn’t be noticeable once I cut the fish out. Use kitchen shears and/or a knife to cut your two fish out. I made one a little bigger than the other. 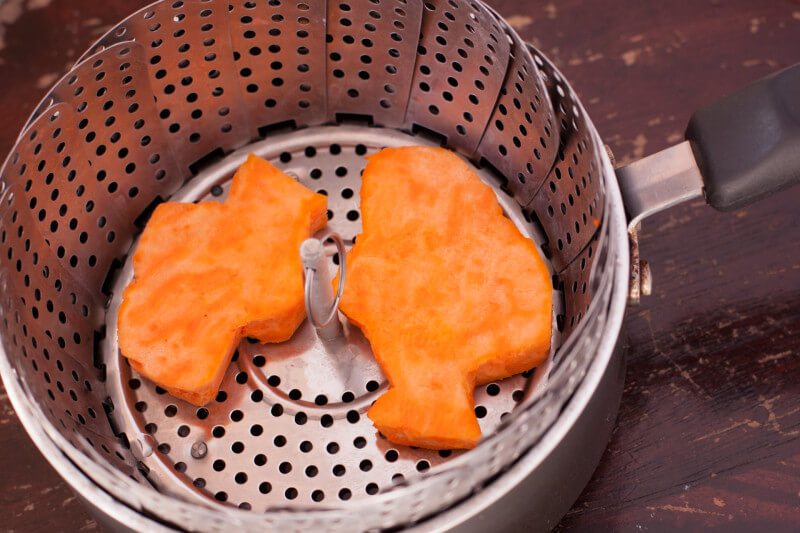 Next you’ll need to steam your fish for about five minutes, until they’re soft but not mushy. You can also roast them in the oven, but steaming is faster and my son preferred the steamed texture. If you’re not sure about the timing, stick an extra piece of sweet potato in the basket that you can poke with a fork to test. 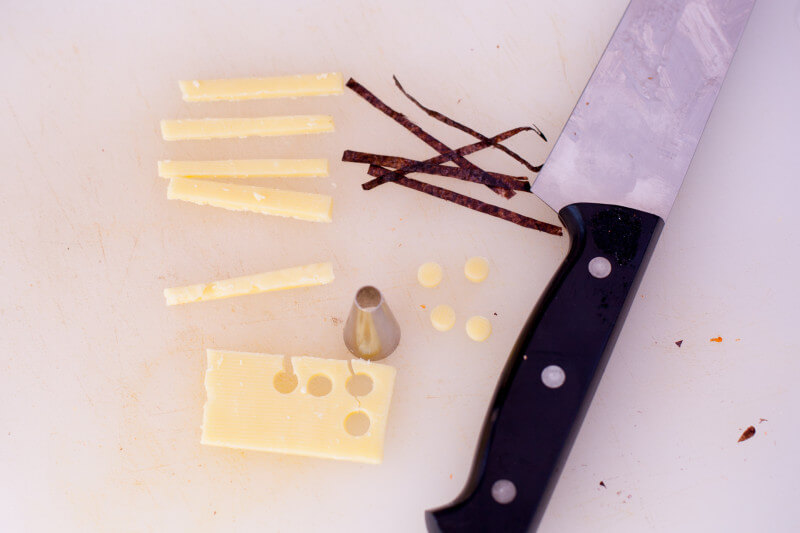 While the sweet potato is steaming, you can cut out your stripes and eyes for the fish. You need to make your seaweed strips a little wider than the white cheese strips for the fish’s stripes. I accidentally reversed it in this photo and had to cut some new seaweed. I used a
#12 decorating tip to cut some cheese for the eyes, and then some cuticle scissors to cut out little seaweed circles for the pupils. 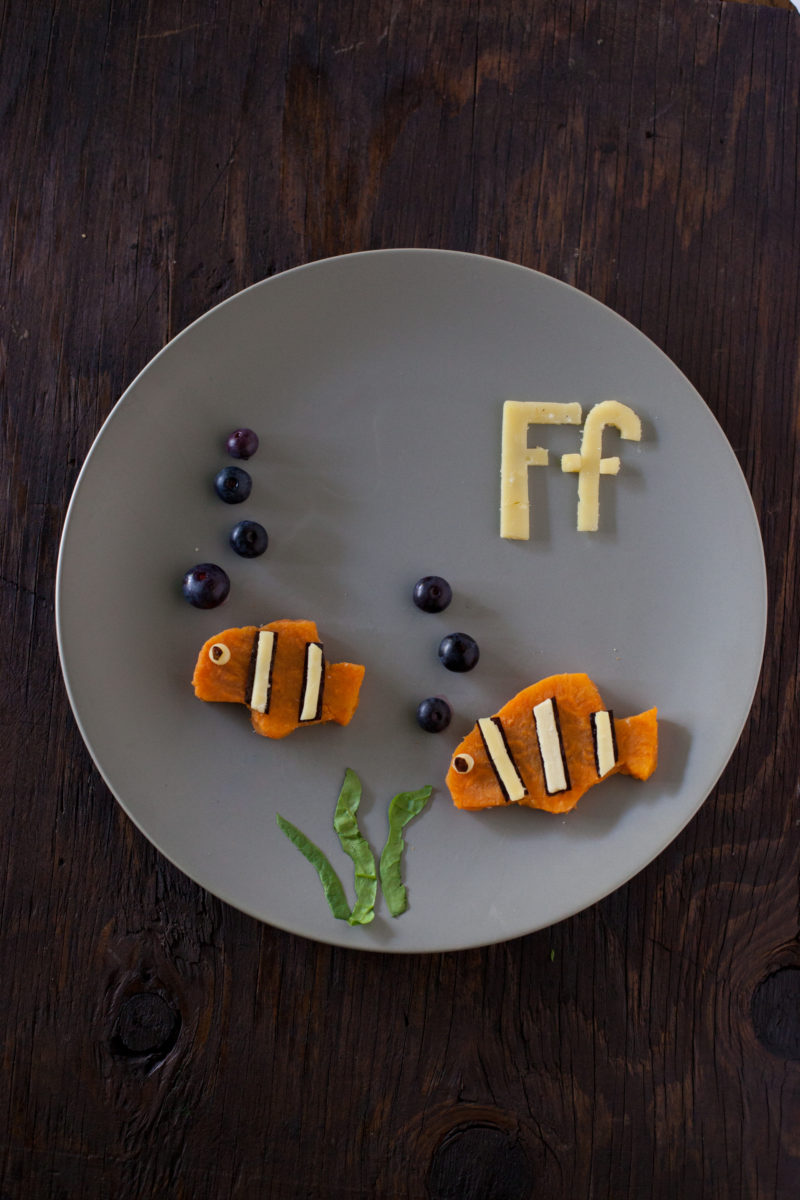 Make sure to let the fish cool a few minutes, you can even stick them in the fridge, before setting up your underwater scene.
Now comes the fun part that your mini chef can help with.
Place the sweet potato fish onto a large round plate, and place seaweed stripes on, trimming the to the right length. Place cheese stripes on top of the seaweed, trimming those as well. Give each fish a cheese eyeball topped with a dot of seaweed.
If you have older mini chefs, they can decorate the fish themselves. Toddlers will do better having you decorate the fish so they can tell what they are, and then decorating the scene around the fish.
Place a capital and lower case F made out of cheese onto the plate, then give your mini chef blueberries to place for bubbles, and strips of spinach to place as seaweed. 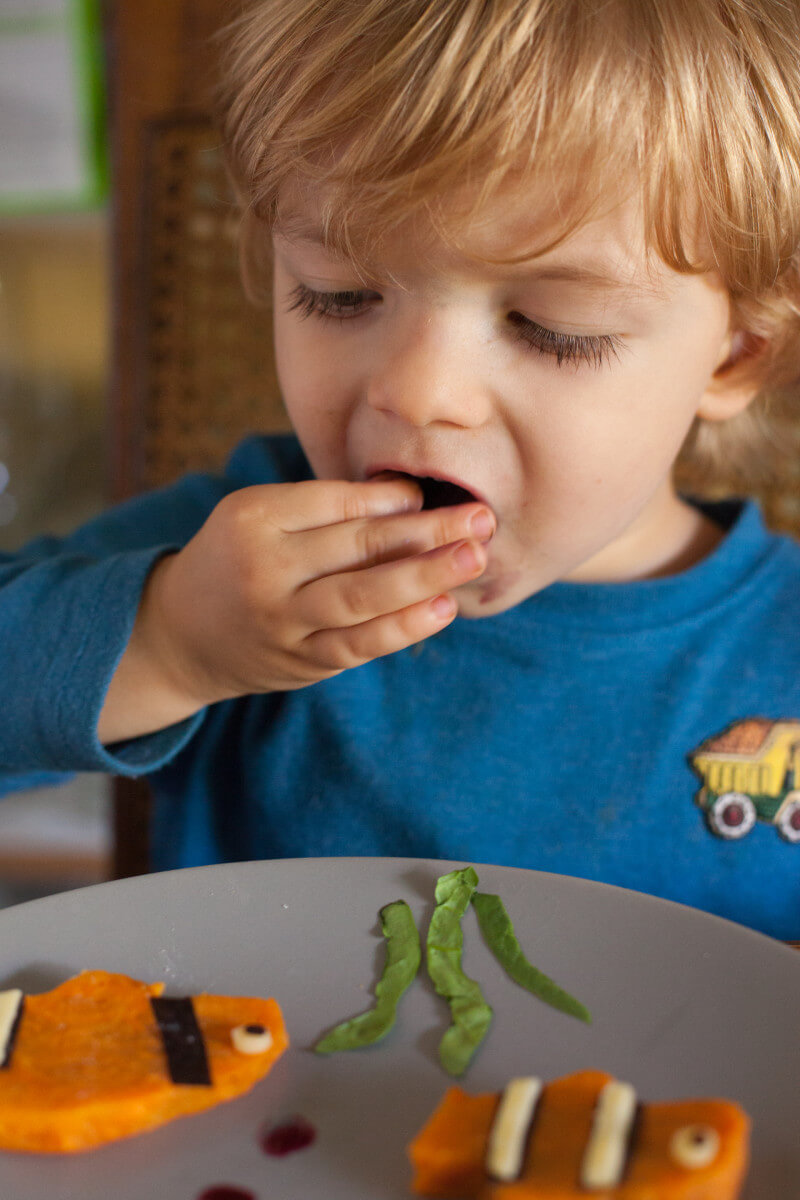 The first time I made these for Corban, he was very hesitant about trying the sweet potato, which he had only had pureed before. After he ate everything else on the plate, I told him that he was Bruce the shark, and then I made Nemo swim around by his mouth saying “No shark can bite me, I’m Nemo, I’m too fast.”
Both Nemo and Marlin were quickly gobbled down by the hungry shark, and we now have to play Bruce the shark at almost every family dinner. But it’s worth it to see Corban actually eating foods he has normally refused in the P-I-C-K-Y stage. 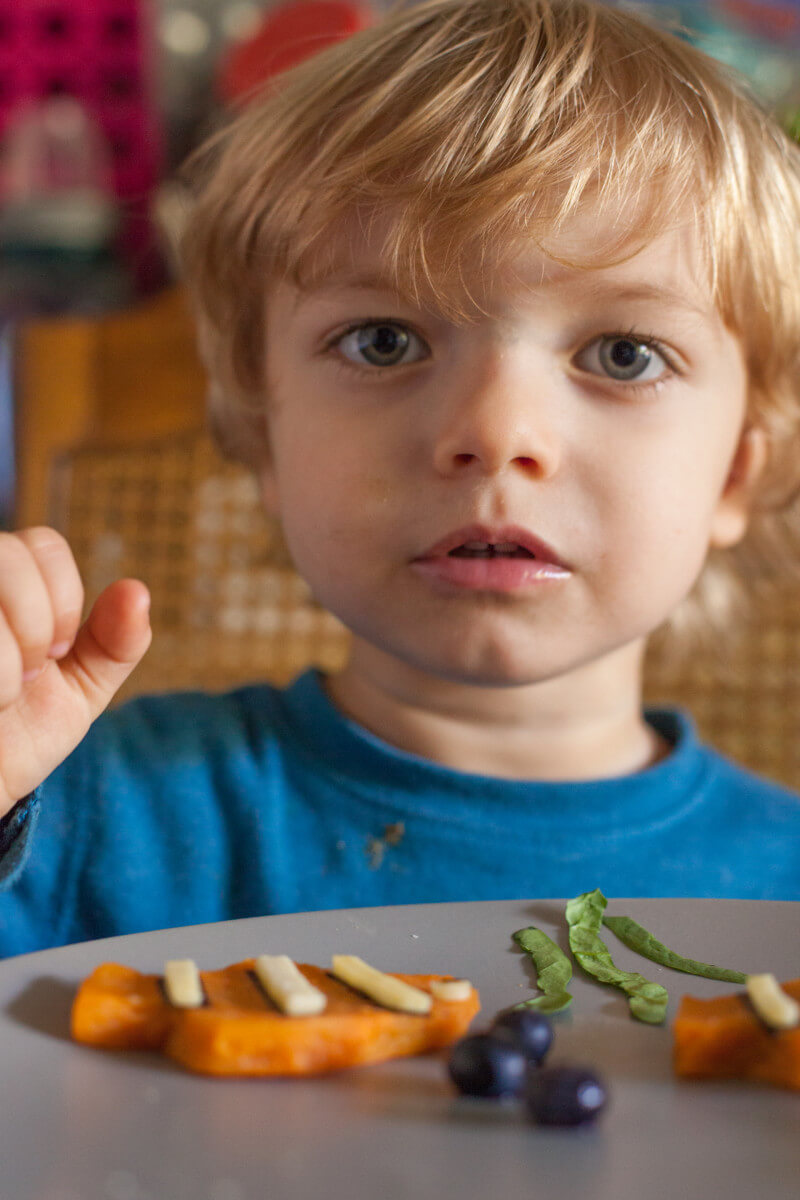 Want more healthy toddler snacks that teach the alphabet? You can find all of our
alphabet kids’ snacks here!

Approximate cost/serving: Because you're using bits and pieces, this is a very cheap snack. Just make sure to eat the cheese scraps, and to use the sweet potato scraps for that night's dinner. This cost us just about 40 cents!

Vegetarian/Gluten Free: This is meatless but does contain dairy so not vegan. It is gluten free as well.

22 thoughts on “Healthy Toddler Snacks F is for Fish”