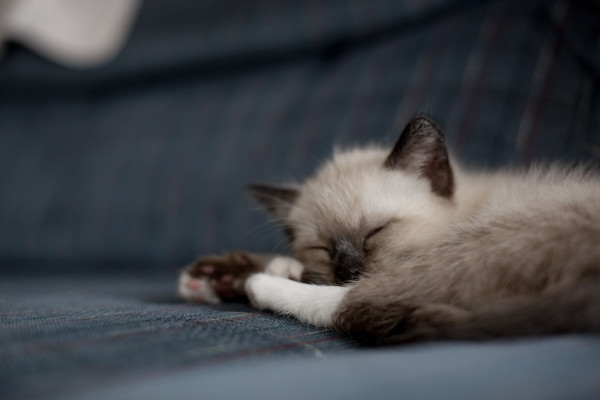 They say that pets often adopt you, rather than the other way around, and our cat experiences definitely validate that theory.
Our first cat, Cappuccino, was a declawed Siamese mix that someone in our neighborhood had abandoned when their house
was foreclosed. He was hungry and scrawny, with a three-inch stub of a tail. He was also the friendliest, most cuddly cat
we had ever met in our lives. He very determinedly chose us as his family, and stole our hearts each and every day until
his death a year later. We were heartbroken, and decided we needed a year to heal before finding another cat. Knowing that
Cappuccino was really Eric’s cat, I decided that it was my mission to find Eric another Siamese by his next birthday. I spent
the next four months desperately searching for a Siamese, or part Siamese kitten in need of a home. We didn’t have tons of
money to spend, and we also specifically wanted one that looked Siamese, to honor our memory of dear sweet Cappuccino. As
time went by, I began to worry that I wouldn’t succeed in my mission. Then I found a Craigslist ad from a gal who was looking
to rehome some Siamese kittens in a few weeks. I contacted her, and she sent me this picture. 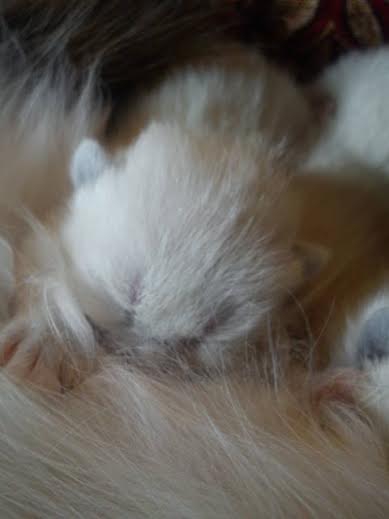 I fell in love! Wanting to surprise Eric, I began coordinating with her over email. The next week, I drove out to pick my
kitten. Or so I thought. When I walked into the master bedroom and leaned over the box where the mama cat was nursing her
kittens, I gave a sigh of delight at the sight of four little furballs snuggled into their mommy. At the sound of my exhale,
one kitten detached, and looked up at me. Our eyes met, and I could almost hear him tell me, “I’m the one.” 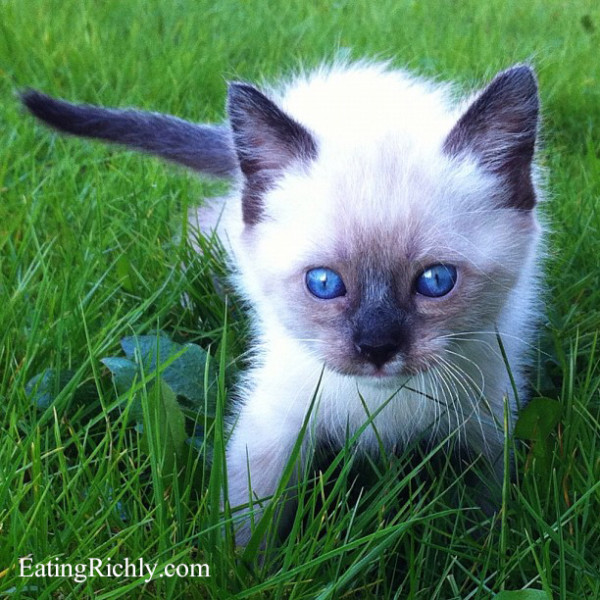 Then he pulled himself onto his tiny legs, wobbled over to the wall of the box, and began mewling at me to pick him up.
As I cradled him against me, feeling his tiny motorboat purrs, I knew he was the one, and that he chose me. The first week
of April, just a week before Eric’s birthday, we drove out together for his birthday surprise. Our little fluffball had doubled
in size, and eagerly pounced on Eric the moment he saw him. Once again, he was letting us know who was choosing who! The
family we got him from said we would have so much fun, because he was definitely the most adventurous and spunky of the bunch.
They did warn us though that he very firmly knew what he wanted, and was a picky eater. (If only I’d known then that
SHEBA® Entrées are made from carefully selected, high quality ingredients for an irresistible taste. In fact, your cat
is guaranteed to love it, or you’ll get your money back. I can’t even remember how much I spent on uneaten cat food!) 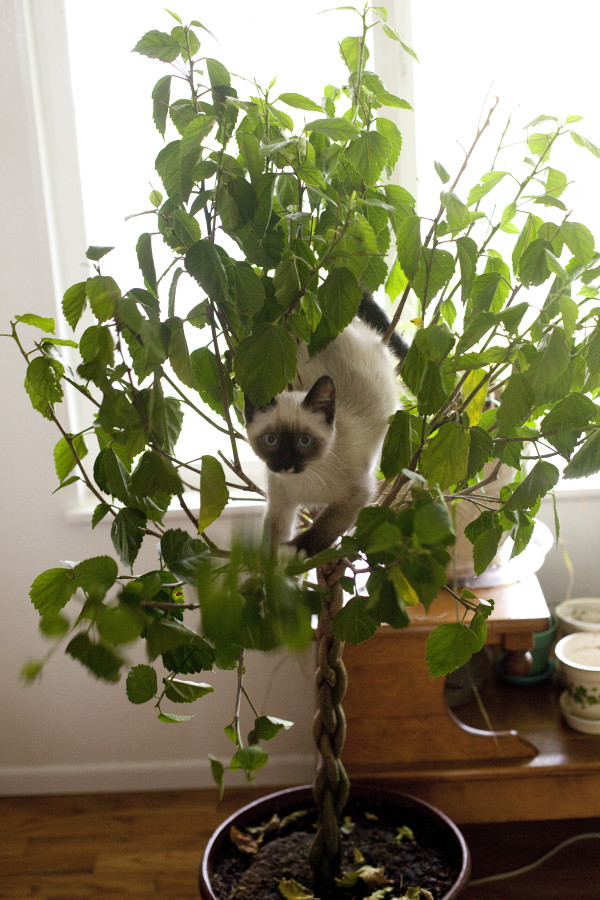 Although Haldir was fine with leaving his mom, when we got outside of their house, he began crying in fear. It was his first
experience in the big outdoors with the bright sun, and he was not yet a fan. He quickly snuggled into Eric’s chest, falling
fast asleep to the rhythmic beating of his heart. Once we got home, he decided it was safe to explore a bit, and we gave
him his first crawl in the grass, and captured our first photo of him. We learned that he plays HARD, much crazier than our
9 year old Cappuccino did. He would tear from room to room, climbing everything from my indoor potted tree, to the dog’s
water dish! With all that energy he has, he needs lots of protein to keep him fueled. Fortunately
SHEBA® Pates start with real beef, poultry, or seafood as the first ingredient, so they are packed with healthy protein
for your cat’s living room lap time (and by lap I mean endless running dashes around the room!) 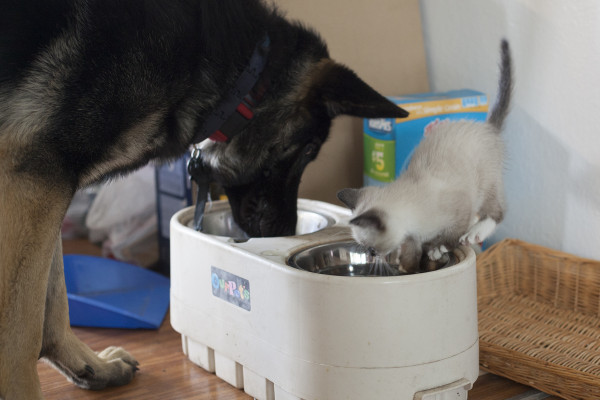 While most of the day was crazy energy, mornings and evenings were, and are, snuggle time. If we weren’t sitting down to
hold him when he was ready, he would jump up and swat us on the backside, as if to say, “Take a seat! I need a cuddle!” Excited
that he loved to snuggle as much as we do, we quickly learned that he really likes a sleeping buddy. Whether snuggled on
our laps, or with a stuffed animal, he clearly knew that sleep was better together, so it was no surprise when
he decided to take up co-sleeping! 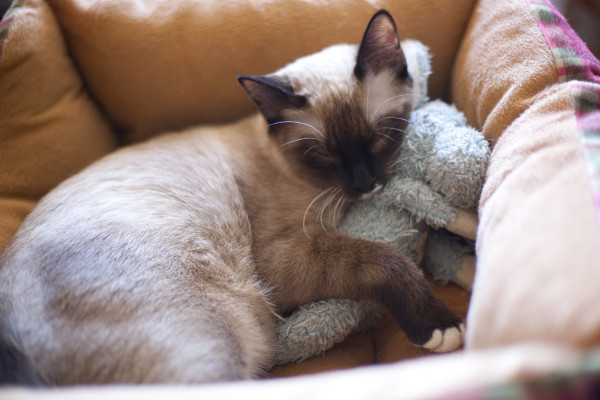 Haldir really is a member of our family, and since I don’t buy foods with artificial ingredients or preservatives for the
people in my family, it only makes sense to avoid them for our pets as well. I really love that all SHEBA® recipes are formulated
without corn, wheat, soy, or gluten, and never have artificial flavors or preservatives. None of the other big mainstream
wet cat food brands (Fancy Feast, Friskies, 9 Lives, Meow Mix) can say that! I’ve learned so much about SHEBA®, and the world
of cat food, working with them on these posts about Haldir. I have definitely grown to respect them as a company, and hope
you have a chance to give them a try!
SHEBA® Entrées for Cats features three lines: Cuts in Gravy, Pates, and GRAVY DESIRES™ Entrées, all specially created
to satisfy the special kitty in your life. I’d love to hear if you have a cat and how you got them… I mean… how THEY
chose YOU!

This program is sponsored by SHEBA® Brand and BlogHer, I was compensated for my writing but all opinions are my own.

2 thoughts on “How Our Cat Adopted Us”