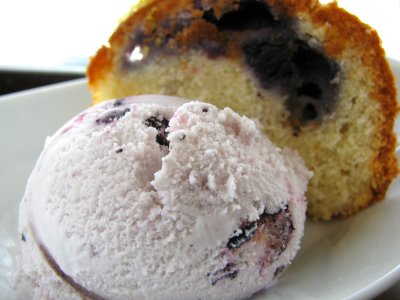 “We have to make ice cream, stat!” Those were the words that rushed out of my mouth as my husband brought home more groceries than could fit in our freezer with the ice cream maker in it. There’s no way we could take the ice cream maker out of the freezer to thaw without actually using it! Remember I promised this recipe because it goes so great with lemon blueberry bundt cake? Now that I’ve had the combination, it would be hard to have one without the other, it’s so good!

For those of you who aren’t sugar addicts (myself included) I have to apologize for all the sugary posts. I have had more “junk” food in the last two weeks than I do in a year, literally! First of all, we helped some friends of ours move over last weekend. The first day we brought a crew of teenage boys and got everything moved from one house to another. The second day Eric and I went alone to help them unpack. Both days they had bags of chips and M & Ms sitting out on the counter in the kitchen (my dream kitchen by the way). It was so easy to just snack on them every time you walk by without even thinking about it. 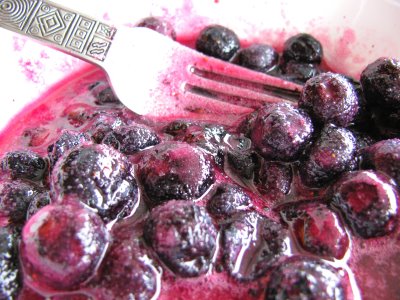 Then, I made mango and lemongrass ice cream with blood orange syrup. A couple days later I stopped by Goodwill and found a cute bundt cake pan and decided I needed it since it was only a dollar and I didn’t have one. So, of course, I had to make bundt cake. That same day I realized my Daring Baker’s challenge was due and so whipped out some mini chocolate and orange cheesecake bites. Then finally, we’re at the emergency blueberry ice cream. I am on sugar overload, and my jeans were actually too tight in the rear on Friday 🙁 I am back to cooking healthy after this (and regular gym visits/hikes!). You can expect more yummy cheap and healthy meals soon. 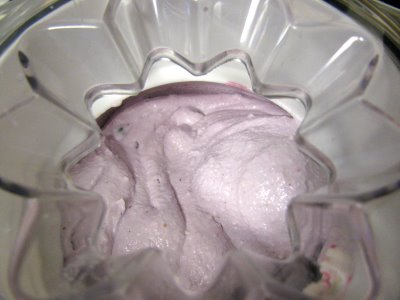 But as long as we’re indulging, I have to say that this is the best ice cream I have ever made. It’s the first time that we could not think of any ice cream storebought or homemade that we like better. It’s that good. In fact, this is the first time that as soon as I made it I rushed to the laptop IMMEDIATELY to make sure I write the recipe correctly. It’s that good. So honestly, to look out for my hips, I may not make the bundt cake to go with it very often, but I will definitely make this ice cream again. Oh, and it has 2% milk in it, so I can pretend it’s healthy right? Right? 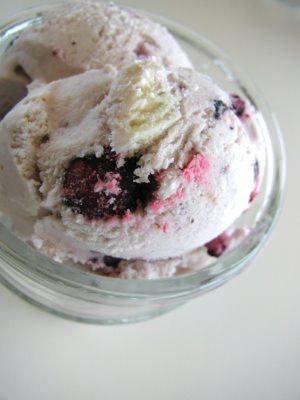 Place berries in a microwave-safe bowl and microwave about 30 seconds until slightly softened but still very cold. Add lemon juice and half the sugar (1/3 cup). Mash with a fork until well mixed. Place in the refrigerator.

In another bowl mix remaining sugar and milk until sugar dissolves. Mix in heavy cream and vanilla. Pour into ice cream maker and churn for 25 minutes. Add blueberry mixture and churn another 5 minutes.