Have you been looking for a guilt free autumn dessert? You have to try these oatmeal pumpkin chocolate chip cookies! Whole wheat flour, oats, organic sucanat, fresh pumpkin and dark chocolate chips turn these cookies into a healthy dessert perfect for any fall or winter holiday.

Every year since moving to Washington, I start craving pumpkin flavors in the second or third week of October. Pumpkin patches begin to pop up all over as bright orange polka dots in fields of green, and grocery stores smell like pumpkin pie spice when you walk in the door.

Fortunately, I had a couple containers of homemade pumpkin in my freezer from the last pumpkin season. I pulled them out and began experimenting.

There are a lot of recipes that use applesauce or mashed bananas to reduce the amount of butter or oil in a baking recipe. I decided that pumpkin puree would work just as well and give the cookies a nice fall flavor.

I wanted to use whole wheat flour, so used some fresh ground soft white wheat that I bought from Azure Standard. Another great ingredient I get from them is sucanat. Sucanat is sugar in its natural form, dehydrated cane juice. You can read more about it in my rhubarb strawberry crisp post.

Now, if you’ve never made your own pumpkin puree before, don’t be afraid, it’s really easy. I’ve got all the instructions in my post on how to cook a whole pumpkin. You could also substitute canned pumpkin, but since you only need 1/4 cup you might want to have another pumpkin recipe ready to make. Maybe some pumpkin cream cheese spread, pumpkin crunch bars, or a pumpkin bundt cake!

While we’re talking pumpkins, I have to tell you about Phurba and Fred’s first trip to the pumpkin patch!

Fred is our newest exchange student from China. He’s been really excited to learn about Western culture so he literally bounced out of the car when we arrived at Mosby Farm’s pumpkin patch. He eagerly grabbed a wheelbarrow and practically ran down the pumpkin lined paths looking for a perfectly round one.

Phurba was a little bit nervous. He seemed to be worried that something would happen to me. I don’t know if it’s his herding instinct or what but every time I would get a little too far from him and Eric he would start whining and try to pull Eric over to me. I’ve noticed he does the same thing on walks, when one of us lags behind or gets ahead of the other one he tries to keep us together.

It was a really fun time though. From there we went on to Eric’s parents house for our pumpkin carving party. I brought a batch of these cookies with me, perfect for a pumpkin party. They disappeared so fast!!!

Do you have a favorite recipe made with pumpkin? 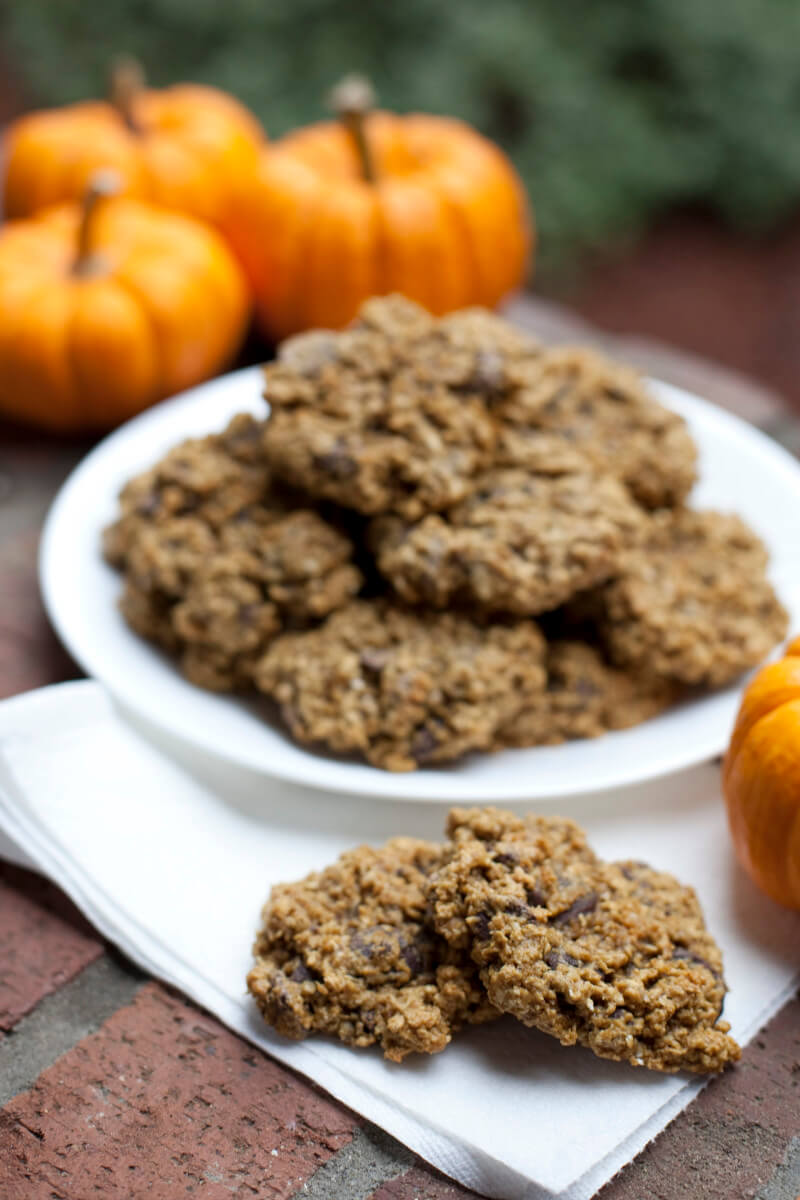 Approximate cost/serving: By making my own pumpkin puree I can save some money. I buy sugar pumpkins when they’re on sale and make lots of puree. I get the oatmeal, wheat and sucanat in bulk from Azure Standard and buy my spices from the bulk section at my local grocery store. This ended up costing me only $3 to make. That’s just 13 cents a cookie!

Vegetarian: This is of course meatless, but not vegan due to the egg.

Nutrition information is an estimate only.