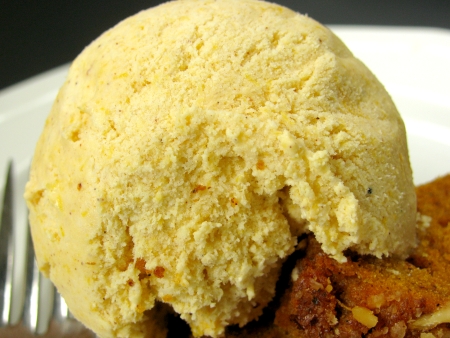 I am a big fan of pumpkin pie, it’s on of the few food items I think is great for any meal.  I especially love making it with fresh pumpkin puree because there’s just something so right about knowing I really made it all from scratch.  (Wanna know how to cook a whole pumpkin and make your own puree?)  I thought about sharing a pumpkin pie recipe for the holidays, but really, they’re everywhere.  So I decided to change it up with something everyone loves…ICE CREAM YOU SCREAM WE ALL SCREAM FOR PUMPKIN PIE ICE CREAM!  Whew!  Got that out of my system.  This is a great dessert option for someone who isn’t confident in pie making. 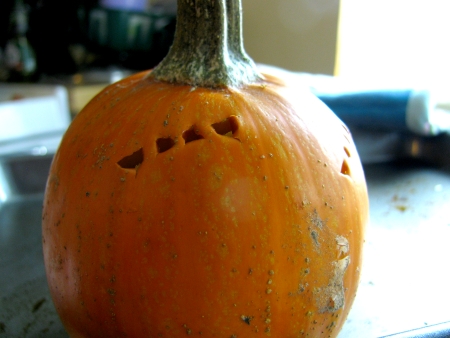 I haven’t actually figured that one out…I’ve been making pie crusts since I was 8 so I’ve never been intimidated by them.  But I understand some people are and I don’t judge you. 😉  I make this from little organic sugar pumpkins.  Right now is the perfect time to do it because stores are trying to get rid of the pumpkins they have left.  Safeway has organic pumpkins for 95 cents right now!  (I bought 5 because I just couldn’t resist).  Rather than cutting it in half to roast like I do with bigger pumpkins, I simply stuck the entire pumpkin in a roasting pan in the oven at 350 degrees.  I let it cook until I could smell it (15-20 minutes or so) and then stuck it with a fork.  When the fork slid in easily (I could come up with a million different analogies for that but I won’t) I knew it was ready. 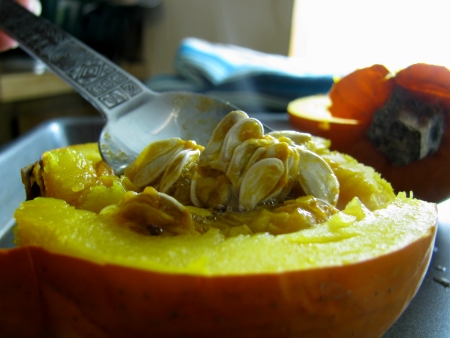 Next you simply stab a knife into the pumpkin and cut all the way around, being careful not to burn yourself!  Pull the two halves apart and use a spoon to scoop out the pumpkin guts and seeds.  Notice the steam rising?  Yep, still hot.  Molten pumpkin flesh is like napalm so beware!  (Don’t toss the guts or the seeds, make pumpkin gut bread and roasted pumpkin seeds).  Next carefully peel away the skin, tear off the stem, and you’re left with nice soft pumpkin flesh.  Puree this in a food processor or in a large bowl using an immersion blender. 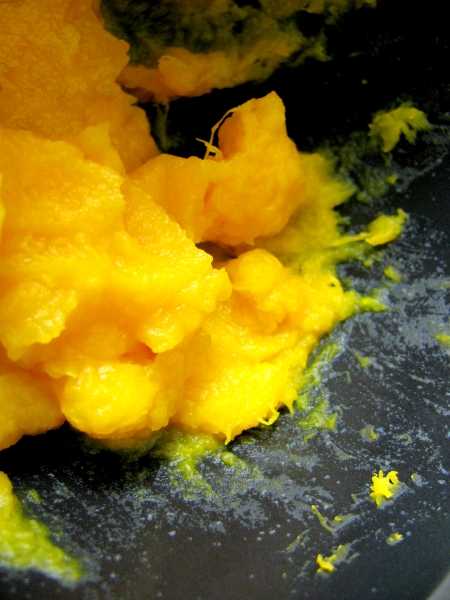 I wanted to make pumpkin pie ice cream so badly that I wasn’t deterred even when I failed!  First I tried making David Lebovitz’s recipe but it was my first time using an egg based recipe  and I didn’t realize how careful I had to be about tempering the eggs.  This meant I ended up with scrambled egg ice cream base.  I still have it in my fridge in the hopes I can somehow use it to make something else.  So I decided to just make up my own, since I was so successful with my homemade blueberry ice cream.  My first try I didn’t chill the mixture enough and it wouldn’t freeze up.  But finally, on my last try…SUCCESS! 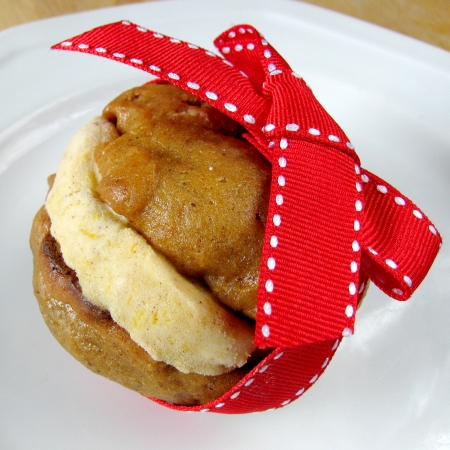 This is a great recipe for combining with other items.  It’s REALLY rich, so I like it in small amounts with pumpkin bread, vanilla wafers, or best of all, in an ice cream cookie sandwich.  That’s right a homemade ice cream sandwich.  Oh Baby!!!  I used my favorite holiday cookie, a persimmon ginger cookie.  It’s got a cake-like texture that goes great with the ice cream.  I think it would also be great with ginger snaps.  What cookie would you use to make a pumpkin pie ice cream sandwich? 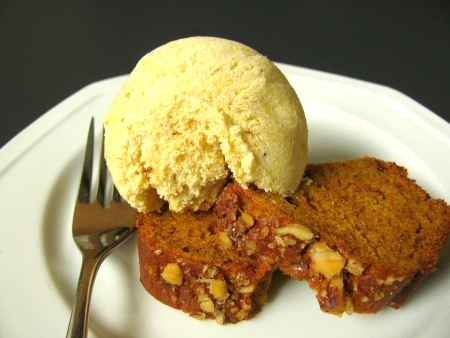 In a large bowl mix milk and sugar until sugar is dissolved.  Add remaining ingredients and stir well.  Refrigerate at least 1 hour.

Freeze according to your ice cream machine’s manufacturer instructions.  Spoon into a large tupperware and freeze an hour for best scooping texture.

Approximate cost/serving: It seems a little expensive to buy the heavy cream at $3.50 a quart.  But when you factor out how much you use and stretch your ice cream like I do it’s pretty affordable.  The whole batch costs about $3.15 to make.  You can get at least 10 scoops out of it, so 32 cents a serving or less.

Vegetarian/Gluten Free: Yes and yes.  For a vegan option, use soy creamer instead of cream, and soy milk instead of cow’s milk.  Make a slurry of 1/4 of the creamer and 2 TBS arrowroot.  Mix everything but the slurry and the vanilla in a pot.  Bring to a boil on the stove and immediately remove from heat.  Add slurry and stir.  Notice it thickens slightly.  Add vanilla, stir and refrigerate until very cold.  Then freeze in ice cream maker.